Polls show Americans overwhelmingly reject any form of US military intervention in Syria’s civil war, with as little as 4% support for an invasion.  Peace protests have sprung up, with further demonstrations planned this weekend ahead of a likely war vote in both houses of Congress next week. 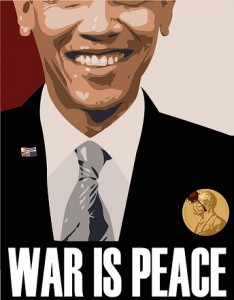 conflict, some photographing themselves holding signs in front of their faces to avoid retaliation.  Images posted to Twitter, Facebook and the wider web state that, “I will not fight for Al Qaeda in Syria.”

Reports out of the G-20 summit in St. Petersburg show similar rejection of this proposed action.  Only France seems ready to commit to the US coalition.  Russia has stood firmly against the US demands, and the Chinese spokesman argued that the price of oil would spike in the event of a new war.  The Pope urged politicians to “lay aside the futile pursuit of a military solution.”  As details of the meetings emerged, Time assessed that, “Apart from France, no one was ready to take up arms with the U.S. in Syria.”

Despite massive public opposition to any military action against the Assad government, the Senate Foreign Relations Committee approved a hastily-assembled war authorization resolution on Wednesday.

The Syrian opposition rebels’ long string of atrocities has not inspired confidence for their cause in the west, as genocidal massacres in rebel held areas continue to be reported.

Ethnic cleansing and summary executions of civilians and captured soldiers have been reported since 2011.  Invading Sunni militias have repeatedly targeted government loyalists, non-Muslims and non-Sunni Muslims.  A recent report dramatizes the situation on the ground:

“We are still finding people who were killed in their homes, and bodies left in bushes,” said Sheikh Mohammed Reda Hatem, an Alawite religious leader in Latakia.  “Until now 150 Alawites from the villages have been kidnapped. There are women and children among them.”

Even the Obama Administration acknowledged that the Al Nusra Front inside Syria are terrorists and placed the group and its affiliates on the State Department’s terrorism list in December of 2012.  Yet, the administration insists on aiding these same rebel opposition forces on the grounds that they are a minority of the opposition fighters.

This vague claim of Al Nusra/Al Qaeda minority status has been made without any corroborating evidence.  Yet even John Kerry concedes that up to one in four of the people who will militarily benefit from a US bombing campaign against Syria are “bad guys.”

As the debate over Syria moved into the Congress, Secretary of Defense Chuck Hagel made his case for attacking Syria.  When confronted by Representative Alan Grayson (D, FL-9th), Hagel responded with some of the most intriguing testimony to date.

GRAYSON: Secretary Hagel, there’s been a report in the media that the administration has mischaracterized post-attack Syrian military communications, and that these communications actually express surprise about the attack.  This is a very serious charge.  Can you please release the original transcripts so that the American people can make their own judgment about that important issue?

HAGEL: What um, transcripts are you referring to?

Hagel expresses complete ignorance of the alleged evidence against the Syrian government that his direct boss, President Obama, has told the world is central to their case for war:

“Our intelligence shows the Assad regime and its forces preparing to use chemical weapons, launching rockets in the highly populated suburbs of Damascus, and acknowledging that a chemical weapons attack took place.”
-Barack Obama, August 31, 2013

GRAYSON: The transcripts that were reported that took place after the attack in which the government has suggested that they confirm the existence of an attack, but actually it’s been reported that Syrian commanders expressed surprise about the attack having taken place, not confirmed it.

HAGEL: Well, that’s probably classified.  Uh congressman, I’d have to go back and review exactly what you’re referring to.

GRAYSON: Well, you will agree that it’s important that the administration not mislead the public in any way about these reports, won’t you?

Hagel finished up the round by stating, “I have no idea what exactly you’re talking about…”  Taking the United States Secretary of Defense at face value, if he sincerely has no idea about any details of the actual alleged evidence against the Syrian state, a UN signatory, one might ask why he’s found it a matter of national urgency to launch a military attack on that nation, in clear violation of international law.

As agreed to by all parties concerned, in the United Nations Charter, the Russian President Putin had this to say:

“…(A)nything that is outside the U.N. Security Council is aggression, except self-defense. Now what Congress and the U.S. Senate are doing in essence is legitimizing aggression. This is inadmissible in principle.”

Beyond the legal realm, Putin escalated his rhetoric and verbal attack on the US administration.

“They lie beautifully, of course. I saw debates in Congress. A congressman asks Mr Kerry: ‘Is al Qaeda there?’ He says: ‘No, I am telling you responsibly that it is not’ … Al Qaeda units are the main military echelon, and they know this … But he is lying and knows he is lying.  It’s sad.”

Tensions between the nuclear-armed powers are currently at dangerous levels.  The US delegate to the UN, Samantha Power, fired back at the Russians, claiming:

“In the wake of the flagrant shattering of the international norm against chemical weapons use, Russia continues to hold the council hostage and shirk its international responsibilities…”

Power signaled that the UN Security Council would no longer be relevant to US decisions on Syria.  This breakdown in the established international order may have numerous ramifications and unintended consequences as this crisis unfolds.

“The use of force is lawful only when in exercise of self-defense in accordance with article 51 of the United Nations Charter and or when the Security Council approves such action.”

Both the U.S. and Russia continue to relocate warships into the waters around Syria, with recent reports of four additional Russian vessels including an intelligence platform and landing craft.  Russia’s Deputy Defense Minister Anatoly Antonov described the move as a stabilizing action:

“Our navy vessels are a guarantee of stability, guarantee of peace, an attempt to hold back other forces ready to start military action in the region.”

The US placed at least five destroyers, equipped with Tomahawk cruise missiles and helicopters as well as a landing vessel manned by US Marines into the eastern Mediterranean.  US diplomats have now been recalled from Lebanon.

Other regional powers have taken steps in preparation for a wider war in Syria.  Israel called up its army reserves and began distributing gas masks to the public.  Iran has reportedly ordered some militants in Iraq to retaliate in the event of a US assault on neighboring Syria.  Unnamed US sources have claimed that this Iranian edict would prompt military actions against the, “U.S. Embassy and other American interests in Baghdad.”

0 responses to “The Grim, Relentless March to War with Syria”