“The Drugs Made Me Do It?” - WhoWhatWhy
Reading Time: 4 minutes 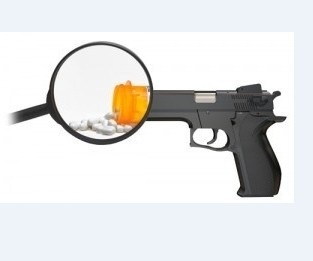 Two years ago, I was creeping through a mall parking lot when a young guy stepped in front of my car without warning.  Although I could not at first see him in the glare of sunlight, I stopped in time—then he threw a full cup of coffee at my windshield.

Fortunately I was in Massachusetts, and not in a state that allows almost anyone to carry a gun—even those with anger management issues.

In the wake of the massacre of 20 innocent first graders in Newtown Connecticut, the gun lobby has blamed just about everything on the planet except weak gun control laws.

Violence on TV and in the movies? Japan is far worse, yet logs a microscopic dozen gun homicides a year. We have 1,000 times that.

Moral turpitude? In Europe hardly anyone attends church and even heads of state often openly consort with mistresses without public condemnation, but the gun murder rate per 100,000 is about a fifth the USA carnage rate.

Perhaps the most intriguing alleged connection is the one between gun crimes and drugs used to treat mental illness—intriguing because there actually is a link—and because the link could be addressed with proper legislation. But that link may not be the one you’re expecting.

The “link” is one of association more than causality. That is, the perpetrator is mentally ill, and is given drugs to blunt the illness. The causality, on the other hand, is the one between the mental illness and the shooting rampages. Here’s the “takeaway”: It is the illness that is at fault, not the treatment.

To be sure, patients on drugs who withdraw suddenly may be at slightly greater risk of causing harm than they were before they began treatment. But is that the drug’s fault? Or the patient’s?

It is also true that doctors can misdiagnose the underlying problem. An excess of anger-promoting vasopressin, for instance, can be treated with a drug like Prozac, which promotes soothing serotonin, but if the aggression is rooted in other brain chemicals and vasopressin levels are actually normal, drugs like  Prozac might make the problem worse. That’s why doctors are told to monitor patients closely after prescribing any depression-related drug.

“The drugs made me do it” is a common and often desperate defense in assault trials. But the National Rifle Association and its congressional mouthpieces are wrong in blaming the drugs for the crimes. As noted by the National Institute of Mental Health, drug issues are rare and almost always easy to detect before harm occurs. That’s why President Obama has called for more access to good mental health care as part of his gun-control initiative.

Connecting the right to have a gun with a person’s mental health is unavoidable. That’s why, under federal law (18 U.S.C. § 922(d), it is unlawful for any person to sell or otherwise dispose of any firearm or ammunition to any person while knowing or having reasonable cause to believe that such person “has been adjudicated as a mental defective or has been committed to any mental institution.”

But there are many loopholes—private gun sellers are regulated in only 10 states and the District of Columbia. In other states, with some local exceptions, sellers needn’t bother to check. And only a dozen states keep a “mental illness treatment” database.

Even worse, databases (where they exist) include cases involving only the most draconian of treatments – institutionalization or a court history. In part because of this, it is possible for most people with a history of mental illness to carry a gun.

The federal government is barred by law from keeping a true national registry of people who have committed crimes or have been institutionalized. When a dealer contacts the registry, Justice Department staffers must hand-search multiple state databases, some on paper. This lack of a national computerized registry makes experience-based predictions about prospective gun owners almost impossible.

Why not be able to make a reasonable calculation, as we do in so many aspects of life, about whether someone with a history of mental illness—who, for instance, used antidepressants at a certain dose and for a certain length of time—could carry a weapon as safely as someone in the general population?  A registry might make that possible. We routinely review people thoroughly for all manner of risk—from corporate employees to nannies.

Not so with guns. In the absence of comprehensive regulation, some states have had to create de facto solutions. This can effectively bar people with a history of treatment for mental illness of even the mildest, least violence-inclined kind, from ever being licensed to carry a gun, whether or not they constitute a reasonable risk or not. This “rough justice” may not be the letter of the law, and it may not even be fair, but I can’t imagine a local police chief in Massachusetts or New Jersey—the two states in which I have lived longest—ever knowingly signing off on anyone with even a whiff of potential risk. So, we end up regulating guns nonetheless, just being highly ineffective about it.

It is unlikely that the United States will ever experience the sort of meaningful gun control found in  Japan, India, or Australia. But there is a clear consensus in this country that the dangerously mentally ill should not have guns. We need to expand upon that consensus and also be more fair to Americans with an inconsequential mental health history: But in the absence of a national registry that could help us make the decision, better to inconvenience 100,000 prospective gun owners with a history of  mental illness, than to allow even one more first grader to be killed.

The National Rifle Association and some civil libertarians disagree. They say that checks on mental history or anything else, especially by an individual gun seller, violate privacy and that the databases have lots of errors. All true—but look at the alternative. The reality is, we’re always weighing opposing interests.

As for the current gun-advocate bogeyman, prescription drugs, why not stop blaming the treatment, as too many already do, and spend some federal money to make the mental health checks mandatory and more accurate and complete? The cost would be a fraction of the annual $8 billion price tag to put an armed guard in every schoolhouse. And the results are likely to be far more effective in protecting the innocent.