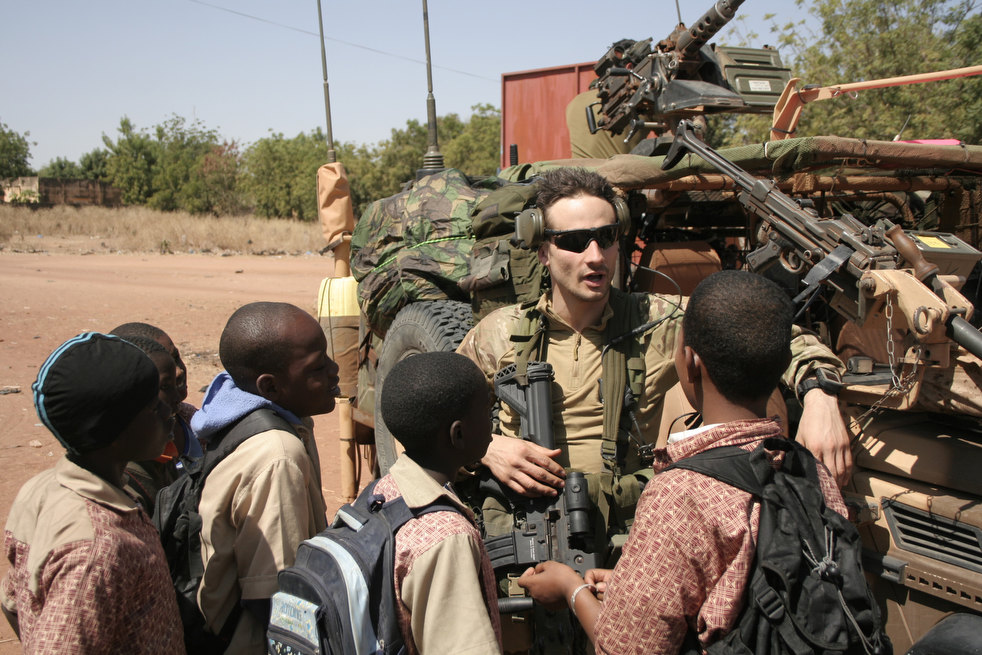 A French soldier explains to Vietnamese (er, Malian) children why he thinks he is in their country

When it comes to unfamiliar, far-off places, we trust our mainstream media to tell us what is going on with interminable conflicts raging through much of the world, and why—and most media trust Western governments’ explanations.

Thus, we learn that France (with the United States in the wings) intervened in the bloody upheavals besetting the West African country of Mali in order to help the government battle a threat as ubiquitous and expected as the old Red Menace: Al Qaeda.

But, as is usually true, things are not so simple. In fact, coming to grips with the searing civil war and foreign crisis du jour requires wading through multiple layers of tangled relationships—which threaten to turn the conflict into a yet another protracted, foreign-assisted internecine conflict.

Amid cinematic gun battles claiming the lives of dozens of Western hostages at a gas field in neighboring Algeria, the world may be finally waking up to the complexity of the Malian crisis. Yet many of those who have studied the region in depth saw it coming. “This has for a very long time been an accident waiting to happen,” says Professor David Anderson, an expert of African politics at St Cross College, the University of Oxford.

And no wonder. Because, as always seems to be the case, these benighted and barren provinces sit atop some rather spectacular wealth.

But we are getting ahead of ourselves.

The current conflict long predates (and ultimately will transcend) the recent-vintage Al Qaeda and all of its amorphous and poorly-defined franchise operations.

For decades now, the Tuaregs—a native Berber tribe whose members are spread across the vast expanse of the Sahara desert—have launched periodic rebellions to gain independence from Mali, Niger, Algeria and other countries in the region, whose territories incorporate lands the Tuaregs claim as their own.

The current crisis may be said to have its roots in another Western intervention, when France, the United States and allies—notably including Islamists with Al Qaeda ties—invaded Mali’s northern neighbor, Libya, under pretenses of protecting a domestic uprising and vanquished the quasi-socialist leader there, Muammar Qaddafi, who had, among other things angered Western financial and business interests. (For more on that poorly understood story, see WhoWhatWhy’s reports, here and here.)

Malian Tuaregs, reinforced by a large contingent of their well-trained and heavily armed non-AlQaedite brethren—who had escaped from Libya after their benefactor, Qaddafi, was routed in 2011–captured the entire northern part of the country early last year.

On April 6, 2012, the Tuaregs in the north declared independence for their territory—which is larger than the state of Texas. By early June, however, clashes had broken out between the secular Tuareg movement (its main representative being the National Movement for the Liberation of Azawa, or MNLA) and Islamists, some of whom are allied with an AQ variant that calls itself Al Qaeda in the Maghreb. The MNLA was pushed out of the main cities, and the Islamists took over the fight against the government.

Each side consists of many different factions, and many splinter groups add to the complexity. According to some reports, for example, the attack on the Algerian gas field, which ostensibly took place in revenge for the French intervention in Mali, was in fact part of a power struggle between two large Islamist factions, led by Mokhtar Belmokhtar and Abelmalek Droukdel. The Islamist banner is considered by some nothing more than a “legitimate” overlay on a sprawling criminal network that ran kidnap, protection and tobacco smuggling rackets. This mano-a-mano spills over both sides of the border.

In any case, the president of Mali, Amadou Toumani Toure, was deposed in March 2012 by the Malian military—ostensibly as a result of his incompetent response to the Tuareg rebellion—an act that seems to have rent a dense web of local and regional relationships. To add a hint of tantalizing but obscure spice, several independent sources suggest that it was actually Toure, with regional and Western acquiescence, who had invited the radical Islamists to use the north as a base.

Consider, for example, the following report from the ground by May Ying Welsh, al-Jazeera’s correspondent:

Al-Qaeda has based itself in northern Mali for 10 years, as part of an alleged secret agreement with Amadou Toumani Toure (ATT), the president of Mali who was deposed in a military coup in March 2012 as northern cities were falling to Tuareg rebels…. While ATT relied increasingly on ethnic militias and special units to crush Tuareg insurgency, the Malian army was starved and demoralised, its hungry soldiers forced to sell their weapons to eat, to watch AQIM parade before their barracks, and planes filled with cocaine landing near their bases. The system was rotten. Could they be blamed for overthrowing it?

Here’s the good news: the explanation for this behavior is simple.

If the Tuaregs in Mali’s north were to achieve independence, this would destabilize all neighboring countries that harbor significant Berber populations. The desert areas inhabited by the nomadic tribes, moreover, contain some of the largest concentrations of valuable natural resources in the world—including gold, uranium, oil, gas, and various industrial metals. Mali alone is the third largest producer of gold in Africa—despite being also one of the poorest countries in the world. According to the United Nations Human Development Index, it ranks 175th of 187 countries, and the standard of living there is considerably below the average for sub-Saharan Africa.

Unlike the Tuaregs, most of the radical Islamists have little interest in independence—they fight largely for the establishment of sharia (Islamic law). For the most part, they are also ruthless against their rivals but avid trading partners—whether in the trade of hostages and cocaine (as has been the case in the region for the last several years) or in natural resources. Despite being a target of the post-9/11 War on Terror, they are often quietly preferred by members of the international community to the more secular local nomads.

It is a delicate balance. Neither the regional countries nor France can allow the Islamists to become too powerful, for fear that they would turn into a destabilizing factor themselves. Their push to take over southern Mali proved to be the last straw, leading to the current intervention.

According to Professor Anderson,

French concerns about wider regional stability are genuine, as are the worries of the Algerian government – who are a major target of some within Al Qaeda. France is the Western power with the strongest geo-political interests and financial investment here. The French have bases in Chad, to give but one example, and fear that instability in Algeria brings it too close to home. [Also they have] 6000 French citizens in Bamako [Mali] alone, [as well as significant] mining interests.

However, the situation could easily spin out of control and become a West African quagmire for France and the neighboring countries which are participating in the UN-sanctioned intervention. The Islamists have threatened to turn Mali into a “French Afghanistan,” and this appears to be more than an empty threat. Mali is almost twice the size of Afghanistan, and with its desert and mountainous terrain in the north, somewhat resembles its Asian counterpart. Central authority was never very well established in that part of the country, if at all.

Robert D. Kaplan, the noted foreign affairs analyst and correspondent, described in a recent Stratfor article his experiences in the region some years ago:

Here the Malian state did not exist. …These aren’t countries so much as city-states—Nouakchott, Bamako, Niamey, Ndjamena—with armies that try to keep some order in the far-flung, far less populated reaches. State armies never have ruled this desert; rather, they have maintained for much of the time a stable cease-fire with the Tuaregs there (often through integration of key Tuareg fighters into local military bases).

The mixture of rugged terrain, a vast expanse populated sparsely with nomadic tribes, and the presence of numerous militias with diverging agendas suggests that the war will be long, brutal and asymmetric.

Thus, when at the start of the operation the French government said that the military was going into Mali merely for several weeks, a colleague who specializes in Russia giggled. “This is exactly what the Russians said before they invaded Afghanistan,” he said. Mere days later, French Defense Minister Jean-Yves Le Drian announced that his country would continue to be involved in the conflict for “as long as necessary.”

And it all is redolent of foreign adventures past. According to a new report from a French-based human rights group, the “good guys,” i.e. the Malian army, may be carrying out summary executions and brutal abuses of civilians accused—often with no basis—of helping the rebels.

More recently, the MNLA—arguably the only indigenous force capable of taking on the Islamists—suggested through one of its leaders that it was willing to cooperate with the Western intervention forces.

It remains to be seen if a deal can be reached. It seems highly unlikely that the Malian government—or any of the international actors involved—would concede the MNLA’s demand for independence. On the other hand, the secular Tuaregs are reportedly afraid that, as has happened in the past, they will be the main victims of a war against Islamist terror. Given that both sides are under pressure, some sort of a compromise involving an increased autonomy in northern Mali may be possible.

By most accounts, a purely military solution imposed by foreign forces cannot hold. If the intervention forces hope to achieve their goal of stabilizing the country, they would need to negotiate with the Tuaregs and to address the deeper underlying issues. Unfortunately, so far there are few signs of that happening. And the deeper underlying issues do not play well with short-attentioned international audiences.

Oh, wait. Did we mention that there’s gold—and all kinds of amazing stuff, under the ground? Actually, when it comes to that subject, even a dauntingly complex stew like Afghanistan can seem very simple indeed.