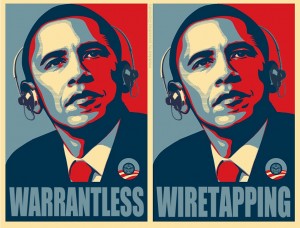 While pundits and partisans argue about what President Obama’s second inaugural address bodes for the next four years of political in-fighting, the assault on privacy rights that began under George W. Bush shows no signs of abating under Obama. Just before the New Year, the President signed into law an extension to a warrantless intercept program that infringes on basic legal precepts of privacy and, many argue, directly contradicts the Fourth Amendment.

In all the drama surrounding the “fiscal cliff,” the renewal of the FISA Amendments Act (FAA)—the 2008 legislation that allows for warrantless surveillance of the emails, text messages, and internet searches of US citizens—seems to have slipped under the radar.

Under the renewed law, for the next five years the National Security Agency (NSA) can eavesdrop without a warrant on US citizens who are suspected of engaging in conversations with suspicious non-US-citizens. Conversations have to contain “foreign intelligence information”—but exactly how this broad term is interpreted by the NSA is unclear. What’s more, a FISA order on one specific person can be used against entire groups, potentially meaning blanket surveillance on thousands of Americans at a time.

The 2008 FAA was created in the wake of a journalistic expose revealing how the Bush Administration had circumvented a previous law—the Foreign Intelligence Surveillance Act (FISA) of 1978. That earlier FISA had mandated that the NSA obtain a warrant from a special court if it wanted to spy on Americans. When confronted with the Administration’s blatant law breaking, Congress took the route of least resistance, crafting the FAA, which retroactively immunized the culpable parties. It also entrenched the Bush-era blanket surveillance as law.

Federal courts, routinely deferring to the executive’s assertion of the “state secrets” privilege, have hitherto stiff-armed challenges to FAA.  Indeed, it is so swathed in secrecy that not even those who voted for the invasive program fully understand it. When Senators Ron Wyden [D-OR] and Mark Udall [D-CO] asked last May for a rough estimate of how many Americans have been targeted through the FAA, the Director of National Intelligence (DNI) responded: “I’m sorry. That’s not reasonably possible”.

In response to another letter from Wyden in July, the DNI  conceded that “on at least one occasion the government’s implementation of section 702 of FISA has sometimes circumvented the spirit of the law,” and that it was “unreasonable under the Fourth Amendment.” The Wall Street Journal said that this “represented the first time the government has acknowledged U.S. spy activities violated the Constitution.”

Wyden was joined in opposition to the FAA by Senator Rand Paul [R-KY], who said that reauthorization of FISA would be “unconstitutional.”

“Over the past few decades, our right to privacy has been eroded.” Paul said. “The Fourth Amendment was written in a different time and a different age, but its necessity and its truth are timeless.”

But such warnings were disregarded by the majority, as the Senate voted 73-23 to reauthorize the Act. Senate Majority Leader Harry Reid justified this action, claiming it was essential in the fight against terrorists.

Channeling Dick Cheney, Senator Reid warned that without it, “We will be giving terrorists the opportunity to plot against our country undetected. [Sen. Paul] is threatening to take away the best tools we have for stopping them.”

Exactly how these “tools” are being used is still unclear. During committee debate in December, the Senate rejected all proposed amendments that might have brought some transparency to the FAA. These included a modest proposal from Wyden, which didn’t seek to take any power away from the NSA. It would merely have required the agency to report each year to Congress on how its surveillance was affecting American citizens. Even that tepid and modest request was out of bounds.

As the War on Terror enters its second decade, the rhetoric of fear remains effective in silencing opposition to warrantless surveillance, which—along with drone strikes and indefinite detention—seems immune to meaningful legislative oversight or judicial review.

In the name of “national security,” what was once considered in violation of basic precepts of American justice, today is passed off as nothing more than the status quo. And barely a word of outrage is heard.