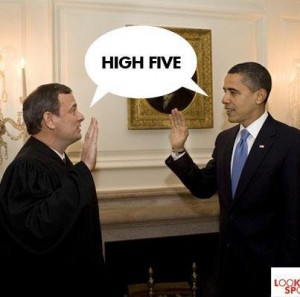 The media is wildly touting the big victory for Obama and the public with the Supreme Court decision in favor of mandated health insurance. But why did John Roberts provide the swing vote in FAVOR of Obama’s position?

John Stauber, founder of the straight-talking outfit PR Watch, who is always on the lookout for disinformation and corporate manipulation, thinks he knows the answer. A friend of WhoWhatWhy, he sent over a short item he published yesterday at Counterpunch:

It was a brilliant move by far Right (but oh so likable) Chief Justice Roberts to side with the Dem-appointed Justices and uphold ObamaCare.  After all, this is a massive victory for corporate power, forcing citizens to buy an expensive insurance product that won’t serve our needs very well but will profit industry, in lieu of receiving real health care.

Obamacare and its corporate mandate were born on the Right (as in Heritage Foundation) as a way to destroy the political prospects of any single payer system that would cover all Americans with a tax-funded system of guaranteed medical care.  This is the way all other industrial societies protect the right to health care, by taking it out of the hands of the giant insurance industry.  The right to health care is like the right to not be enslaved – there are no half measures, and the insurance industry is the slave master.

Roberts may have brilliantly scored a “4-fer” victory:

1.)  He now has an interesting historic legacy.

2.) He and his Dem-appointed colleagues have given huge new powers to corporations, and further reduced the rights of citizens.

3.) Any real reform — call it single payer, or medicare for all — is doomed in bipartisan fashion.  The “pragmatists” who are for Obamacare are duped if they think it is going to be expanded to single payer.  From this point on, it will only be picked over and further reinvented to empower the insurance and drug industries.

4.) Roberts siding with Dems has probably bounced Obama right out of office.  The public overwhelmingly hates Obamacare, and this pours gas on the electoral fire.

What do you think? Readers, please weigh in.

There are 22 comments Our Comment Policy: Keep it civilized, keep it relevant, keep it clear, keep it short. Please do not post links or promotional material. We reserve the right to edit and to delete comments where necessary.