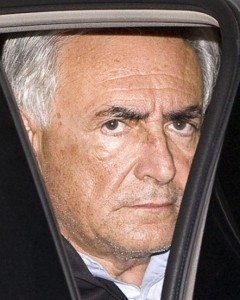 For fans of Edward Jay Epstein’s work, it was nice to see him weigh in on the Dominique Strauss-Kahn case in the December 22nd issue of The New York Review of Books. Epstein has a world-wide reputation as an investigative reporter—on JFK’s assassination, for instance—and trails after him a cloud of rumor that he is or has been involved with U. S. intelligence agencies. It is never exactly clear where Epstein is coming from, or whether there is a hidden agenda, but he always comes up with something new, as he has again with this story. His recent article presents for the first time a granular, minute-by-minute account, fleshed out with new revelations, many based on Epstein’s access to the electronic key swipe records and time-stamped security camera videos of Sofitel New York, where it all took place.

The basic outline of the story is well known: a cleaning lady at Sofitel claims a sexual assault by Dominique Strauss-Kahn (often referred to familiarly in the press as DSK) just past noon of May 14, 2011; police investigate and some five hours later, Strauss-Kahn is pulled off an Air France plane by police and jailed on seven counts, including attempted rape and sexual abuse. There is forensic evidence of sexual contact between Strauss-Kahn and maid; he admits to as much but claims it was consensual. Eventually he is cleared of all charges because of the unreliable testimony of the maid, Nafissatou Diallo, a 32-year-old immigrant from the West African nation of Guinea.

Here are some of the new facts claimed by Epstein:

>On the morning of the alleged assault, Strauss-Kahn receives a text message from a female friend, temporarily working in President Nicolas Sarkozy’s political party office. Strauss-Kahn was to have opposed Sarkozy in the April 2012 elections. The friend warns Strauss-Kahn that at least one email he had sent from his BlackBerry to his wife “had been read at the UMP offices in Paris.” The speculation is that Strauss-Kahn’s phone may have been hacked, and that Strauss-Kahn “might be under electronic surveillance in New York,” according to Epstein’s article.

>At 10:07 Strauss-Kahn calls his wife in Paris to make arrangements to have his BlackBerry as well as his iPad “examined by an expert.” In other words, checked for bugs.

>The key swipe records indicate that the maid had entered a small room, #2820, near Strauss-Kahn’s “Presidential Suite,”   before entering the suite itself, #2806.

>At 12:05 a waiter named Syed Haque used his key to enter Strauss-Kahn’s suite. He says he went to clear breakfast trays, but refused to be interviewed by Strauss-Kahn’s lawyers. Key swipe records do not indicate departures so there is no way of knowing when Haque left the suite or whether he might still have been there when Diallo entered.

>By 12:13 phone records indicate that Strauss-Kahn was on the phone to his daughter to say that he would be late for a luncheon engagement. Although there is no record of when Diallo left Strauss-Kahn’s suite, she reentered room 2820 at 12:26. This suggests that, at the outside, Strauss-Kahn and Diallo were in the suite together for 20 minutes, but far more likely for only seven minutes, the time between her entry into the suite and Strauss-Kahn’s phone call to his daughter.

>BlackBerry records show that the phone in question was disabled at 12:51. Epstein reports that no one knows to this day who disabled it, or how. Epstein writes that disabling the phone “required technical knowledge of how the BlackBerry worked.”

>Immediately after the lunch, Strauss-Kahn discovers the BlackBerry in question is missing. There is a protracted search to find it.

>At 1:31 Branch places the call to police to report the alleged assault, one hour after Diallo had first reported it to her supervisors.

>About two minutes after that call to police the tall unidentified man and Brian Yearwood enter an adjacent room and “high-five each other, clap their hands, and do an extraordinary dance of celebration that lasts for three minutes.”

>3:28 Diallo is taken to St. Luke’s Hospital for examination.

The large question that Epstein’s article begs is, could Strauss-Kahn have been set up? Strauss-Kahn admits to a consensual sexual encounter but not to assault. Is it possible that Diallo entered into such an encounter, or even provoked it, so as to make the charge of assault and so as to provide the forensic evidence to make it credible?

Epstein leaves the following interesting questions in the air:

• Who was in room 2820, which Diallo entered before her encounter with Strauss-Kahn in the nearby Presidential Suite, and why did she lie about re-entering #2820 after the alleged attack? (She insisted to police she had not gone into any other room after the encounter with Strauss-Kahn).  And why will neither Sofitel management nor the Accor Group provide the name of the guest in #2820 to the prosecutors? They claim they will not release the name on account of privacy, but they certainly know it. They also know that the mystery occupant was in room 2820 when Diallo first used her key to enter it, and possibly when she re-entered it. Diallo’s refusal to admit returning to room 2820 and the prosecutors’ certainty that she did (based on the key swipe records) seriously undercut her credibility and, among other things, led to the dismissal of the case.

• Who was the mysterious tall man who led Diallo into the security office, and who later high-fived Yearwood?  Why can no one from the hotel identify him? Or do they simply refuse to identify him, just as they refuse to identify the occupant of room 2820? Could the tall man and the occupant of #2820 be one and the same? If so, then it is possible Diallo met with this Mr. X before entering Strauss-Kahn’s suite, met with him again afterward, and was eventually led down to the security office by the same man. Once the police were engaged, Mr. X celebrated with another member of the hotel staff. Maybe.

• What happened to Strauss-Kahn’s BlackBerry? It has never been found. Strauss-Kahn had it in hand when he called his daughter at 12:13, and BlackBerry records show that between then and 12:51, when its GPS circuitry was disabled, it never left the hotel. Among other things, that phone might have provided evidence of the bugging that Strauss-Kahn suspected. Perhaps that is the very reason it was disabled, and then disappeared.

Perhaps none of these questions will ever be answered. But while they hang in the air, unresolved, there is at least the possibility that the case of Dominique Strauss-Kahn might be much more than another seamy tale of sexually promiscuous politicians behaving badly, and more closely resemble an international espionage scandal. In an article for BBC News, commenting on Epstein’s article, Christian Fraser dismisses such a suggestion with several rhetorical caveats. He writes that “perhaps the most important of these is: Why would the [French] president or his staff need to engage themselves in such a sordid plot to bring down DSK?”

There are 18 comments Our Comment Policy: Keep it civilized, keep it relevant, keep it clear, keep it short. Please do not post links or promotional material. We reserve the right to edit and to delete comments where necessary.