Following in the footsteps of Occupy Wall Street and the demonstrations in Madrid, the Occupy movement has gone global. Last weekend saw 951 cities in 82 countries take part in protests and rallies that organizers hope will “initiate global change” against capitalism and global austerity measures. In America the movement has spread from the streets to the pockets thanks to Occupy George. The idea behind this is that money can talk and can take the movement’s message to the masses—by printing and circulating dollar bills stamped with fact-based infographics relating to the economic disparity in the US. Countless videos have been emerging from the protests, including one that has surfaced showing what protests on Wall Street looked like 30 years ago. Complete with costumes and marching bands it appears more like a carnival than a protest; a far cry from the heavy-handed police tactics of today’s protests that many have criticized. One recent video shows a woman apparently getting arrested for trying to close her bank account, while another shows why you don’t need a megaphone when you’ve got a Marine. 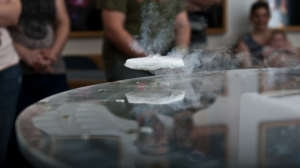 A couple of amazing scientific revelations have been brought to the public’s attention this week, far outshining any recent speculation on what technology to expect in the next ten years. They have proved that is actually possible both to achieve levitation and to see through walls. Quantum levitation looks like magic and sounds like something straight from science fiction, but is in fact a reality made possible with a super-chilled superconductor, magnetic flex tubes, and the so-called  Meissner effect. Meanwhile, scientists at MIT have developed a radar system that can see through solid walls by using microwaves to give an instantaneous picture of the activity on the other side. Now if they could just combine the two and apply them to a human, we could almost have our very own Superman. 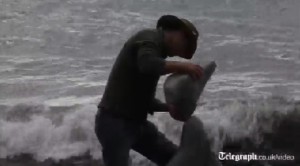 From cutting-edge science to stone-age art, British artist Adrian Gray has been creating improbable and beautiful stone balancing sculptures with the aim of “creating art that has a sense of wonder and magic”. He began making works of art in this unusual manner nine years ago after a tropical virus left him unusually sensitive to electricity. Shunning all technology— including phones, TVs and computers – he subsequently moved into a one-room house carved out of a cliff face along a stretch of coast in England known as the Jurassic Coast. On the beaches below, he found therapy in the painstaking process of balancing one stone upon another in what he refers to as “a paradox of fragility and solidity”.