Did You See This? Police Morph Into Military - WhoWhatWhy
Reading Time: 2 minutes 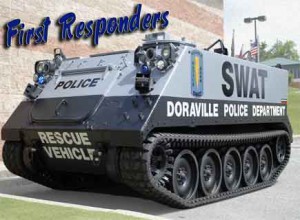 Maybe in all the memorials and analyses of post-9/11 life in America, you missed a comprehensive article on Huffington Post about the militarization of local police forces, not just in the past 10 years but since the Reagan-era inception of the war on drugs.

Frankly, we think “war on drugs” morphs all too readily into “war on everybody.” Case in point: an out-of-control police force in New York using excessive force against the peaceful protesters in the Occupy Wall movement. Video coverage of police brutality in lower Manhattan has gone viral, but there’s scant coverage in that city’s own paper of record.

As author Randy Balko rightly points out, with so much federally-funded military equipment now making its way into big cities and small towns alike, police increasingly see themselves as soldiers fighting an enemy instead of public servants devoted to keeping the peace and protecting civil rights. (See author Balko’s similar story for the Cato Institute.)

We know that many cash-strapped cities are grateful for the federal funds via the Department of Homeland Security that has enabled them to hire more police and outfit them appropriately. But do small towns really need Humvee-heavy SWAT teams to deal with domestic disturbances? In what way are Homeland Security’s goals—supposedly protecting Americans from foreign terrorists—being met when local police forces are able to turn on their own peaceful citizens in an unwarranted show of force?

Perhaps, after watching this video, you’ll have some questions yourself.

4 responses to “Did You See This? Police Morph Into Military”