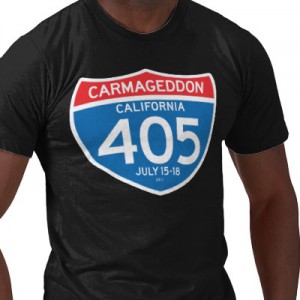 Bearing an average of nearly 400,000 cars per day, the 405 Freeway in Los Angeles is the busiest highway in the United States. That’s why, when Angelenos received news that its most congested stretch, the West LA corridor between I-10 and I-101, was to be shut down for two whole days of renovation this past weekend, terror began to brew. “Carmageddon,” the media dubbed the ensuing disaster, and over a month in advance, anxious speculation about its impact was the talk of the town. What would LA, a city famous for its single-passenger car culture and paltry public transportation, do without the 405, its indispensible Westside aorta? Fears abounded of isotropic, total gridlock. The rest of the freeway system would surely become parking lots, with traffic spilling onto adjacent side streets, and eventually the entire city. Los Angeles, everyone feared, would stop dead in tracks.

But guess what happened last weekend, after all was said and done? Wait for it: absolutely nothing. People stayed local or left town to avoid the melee, leaving the unclosed freeways almost completely wide open (as confirmed by sigalert.com). Traffic, ironically, was significantly better than normal. Nothing compared to the congestion that occurs every time President Obama visits Los Angeles, and streets are blocked off to accommodate his motorcade.

So what did we learn from all this? Either (A.) that Los Angeles’ normal traffic situation is already ‘Carmageddon,’ and any break from normalcy is a relief, or (B.) that President Obama really is the anti-Christ, and all those Christian fundamentalists were right all along.

In all seriousness, a lot can be gleaned from this recent turn of events—or lack thereof, depending on your perspective. For one, we’ve gotten an insight into the perennial American penchant for apocalypticism—and the media’s role in fueling this sort of paranoia. The ‘Y2K’ hype before New Year’s 2000 was probably the most high-profile, overblown example in recent memory.  After spending over $134 billion total on systems updates and firewalls, American organizations were disappointed to find that, come New Year’s Day, an international cyber-meltdown never materialized (sure, one could argue that nothing happened because the warnings and subsequent preparations were extraordinarily effective, but come on—non-believers walked away equally unscathed, and with no out-of-pocket expenses).

Is this the lesson of Carmageddon: that threatening us with the imminent end of civilization as we know it is the only way to get us to behave rationally for our own good? As with Y2K, there are those who will claim that the hype was necessary to mobilize preparation, and without it, a true disaster would have actually ensued. If Angelenos weren’t scared, they wouldn’t have stayed home or made plans to skip town (so thank you, noble news-sources, for scaring them). But really, people—is fear the only or best way to encourage sensible preparedness? Is irrational preparation, like Jet Blue’s sold-out Carmageddon flights from one end of Los Angeles to the other, just a necessary evil, and the price we must pay for effective mobilization in our society? Fear works, no doubt, but we can do better.

Certainly, this sort of doomsday preoccupation is nothing new in our society. When Halley’s Comet was to make its expected flyby of the Earth in 1910—admittedly, an especially close approach—newspapers went wild about how the cyanide gas in the comet’s tail might contaminate the Earth’s atmosphere, and extinguish all life on earth. Some papers claimed that a direct collision was also possible. In their Introduction to Planetary Science: A Geological Perspective, authors Gunther Faure and Teresa Mensing describe the pandemonium that ensued:

During the night of May 18/19 of 1910, when the Earth passed through the tail of comet Halley, some people took precautions by sealing the chimneys, windows, and doors of their houses. Others confessed to crimes they had committed because they did not expect to survive the night, and a few panic-stricken people actually committed suicide. Enterprising merchants sold comet pills and oxygen bottles, church services were held for overflow crowds, and people in the countryside took to their storm shelters. A strangely frivolous mood caused thousands of people to gather in restaurants, coffee houses, parks, and on the rooftops of apartment buildings to await their doom in the company of fellow humans.

Sound familiar?  Maybe because the paranoid, spendthrift preparations recall Y2K, or perhaps because the suicides evoke the 39 members of the Heaven’s Gate cult that took their own lives when Comet Hale-Bopp made its most recent flyby of the Earth in 1997. The point is, the frenzy that ensued in 1910 was not the result of pre-scientific, antiquated fear-mongering—the comet’s approach was predicted by contemporary astronomers, of course, who understood well that there was no reason to be concerned—but rather, the fault of a sensationalist media and a gullible populace.

The cultural climate of the United States hasn’t changed all that much since 1910, it seems. But wait, ‘Carmageddon’ is an ill-fitting example, you say, because a gridlocked Los Angeles and doomsday are in two completely different leagues. However, as the hyperbolic moniker might suggest, along with such Hollywood productions as Earthquake and Escape From L.A., Los Angeles has a more intimate relationship with the apocalypse than most places. There’s a simple explanation for this outlook: while the world isn’t really going to end until the Earth is engulfed by the Sun in 7.6 billion years, Los Angeles will be destroyed within 10 million years, when unsympathetic tectonics tear Southern California from the North American Plate. (Which, if you listen to some especially antsy experts corralled by the Huffington Post, could start happening as soon as tomorrow. But even then, LA’s full destruction is at least a few million years away—sorry, New Yorkers.)

In sum, there is no use in fretting, nor paying to survive, the end of the world because (A.) it’s not going to be for a while, and (B.) when it does happen, your descendants will be post-human, mutant cyborgs that will probably find suitable real estate elsewhere, in some other, but no less comfortable, corner of the universe. So, when December 2012 rolls around, don’t worry about it, and please don’t spend a dime—the Mayan Long Count Calendar will definitely complete its Great Cycle, but you will probably survive. If you don’t kill yourself in anticipation, that is.

One response to “‘Carmageddon’: Another No-Show Doomsday”