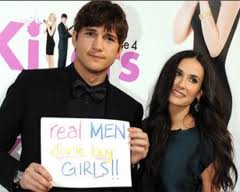 Ashton and Demi raise awareness of an issue—but how big an issue?

When we count on celebrities to provide us with guidance on politics and news, we can easily be led astray. Here, we review a battle between Ashton Kutcher and a newspaper, and find Kutcher coming up short.

By Russ Baker and Spencer Mandel

Apparently, we are among the few people who dislike almost all things about celebrity. Still, a recent story with a star angle caught our eye:

Actor Ashton Kutcher was in a big dust-up with the publication The Village Voice.

Kutcher, who has more influence than almost anyone on account of—um, his spectacular Twitter following (7th most followed on the site, just behind Kim Kardashian)— has sought to use his fame and reach to good ends.

He, with his wife Demi Moore, launched the Demi & Ashton Foundation earlier this year to fight child sex trafficking, and since then they’ve worked to raise public awareness. Sex, of course, gets instant attention, and children the same. Put it together and you have instant headlines. Add Ashton Kutcher and Demi Moore, and you’ve practically got an entire issue of Vanity Fair.

Claiming the underage sex trade to be an invisible crisis of appalling proportions—with between 100,000-300,000 child sex slaves in the U.S. today—the Kutchers have made a number of appearances, and produced  a humorous series of star-studded “Real Men Don’t Buy Girls”-themed ads, to shed light on this apparently burgeoning epidemic.

The problem, according to The Voice, is that Kutcher, Moore and Company have no idea what they’re talking about. The Voice claims that the numbers KMC cite to whip up public outrage are exaggerated by a factor of about 100. Kutcher, furious with The Voice, is attacking the paper’s motives, and has launched a boycott of the paper. By tweeting to American Airlines (@AmericanAir), that, among other things, the Voice’s adult personals section is itself a platform for sex slavery, he’s actually gotten the airline to pull all advertising from the paper. He has made similar appeals to Disney, Domino’s, and Columbia University to follow suit.

We’re no experts on this issue, and don’t have a particular position. However, out of curiosity, we did read the Voice piece, and came away persuaded that Kutcher has this one way, way wrong.

First and foremost, the origin of the 100,000-300,000 figure that Kutcher refers to is from a single, ambiguous study by University of Pennsylvania professors Richard Estes and Neil Weiner. According to social scientists like David Finkelhor, director of Crimes Against Children Research Center, the Penn study has no scientific credibility to it, as it was never peer-reviewed nor published in a scientific journal of any kind (Finkelhor’s charge is bolstered by the fact that Estes and Weiner cite Finkelhor’s own work as a source).

Still, regardless if the Penn study was authoritative or not, Kutcher wasn’t even reading it correctly. The 100,000-300,000 figure is an estimate of the number of children at risk for being prostituted, not the actual count of cases themselves, which is anyone’s guess (“at risk” includes all runaway youth—many of whom are gone for less than a week and staying with relatives—as well as transgender youth and female gang members. Needless to say, it’s a pretty broad category). The number of kids actually involved in sex slavery, without a doubt, is an exceptionally smaller number. According to Estes himself:

Kids who are kidnapped and sold into slavery—that number would be very small. We’re talking about a few hundred people.

If law enforcement figures are any indication, Estes is probably correct on this count, at least. After a 2-month investigation into law enforcement records, the Voice determined that only 827 arrests are made in the U.S. for child prostitution every year. The DOJ’s Office of Juvenile Justice figures are slightly larger, placing the arrest average closer to 1,500 per year, but even so, the Voice’s point is well-taken that a crisis of the scale the Kutchers contend is certainly not underway in the United States.

What’s the moral of this story? We’re not sure. Kutcher’s intentions are surely good, and sure, the feisty Voice not surprisingly enjoys a little celebrity piñata. However, we do see some kind of warning about the flip side of fostering celebrity power for good.

And about the need for due diligence by real journalists, not just those who play them on TV. This is a classic example of how easy it is (and increasingly common)— for those with the megaphone but perhaps not the necessary toolkit—to whip up the population with overhyped alarmist warnings.

Meanwhile, we wonder whether it might not be more useful to focus on real, documented crises—like how hard it is to provide millions of children with basic services, such as food, education, medical care, supervision, and so on. That has a lot to do with the politics of tax reduction and minimization. Maybe that’s a drier issue, but it is a very real one.