It’s Ghislaine Maxwell who will be on trial beginning Monday on charges that the 59-year-old socialite procured underage girls for her former companion, convicted sex offender and alleged pedophile-ring mastermind Jeffrey Epstein.

Maxwell, who has denied the charges, could spend the rest of her life in prison if convicted. But as the jury selection process in Manhattan federal court has already demonstrated, nobody looms larger in and out of the courtroom than Epstein, the multi-millionaire financier with remarkable connections whose August 2019 death while in federal custody was ruled a suicide — and whose name appears throughout the 51 questions each of the 600 prospective jurors was asked to answer before jury selection began last week:

“Before today, had you read, seen, or heard anything about Jeffrey Epstein?”

“If you heard about Mr. Epstein from a media source, please identify the media source by name.”

“If you have heard about Jeffrey Epstein, do you think Ms. Maxwell’s alleged association with Jeffrey Epstein will make it difficult for you to fairly and impartially consider the evidence presented at trial and render a verdict based solely on the evidence?”

As with all jury trials, attorneys for both the prosecution and defense can move to dismiss prospective jurors for no reason at all, called peremptory challenges, or “for cause,” based on how they respond to either the questionnaire or further questioning from attorneys during the jury selection process.

In general, jurors can be disqualified for expressing strong opinions on law enforcement or having personal experiences with the type of crime committed.

And in this trial, jurors can be sent home simply for knowing too much. Too much prior knowledge of Epstein and Maxwell — reading too many articles, posting opinions online or even sharing them among friends, listening to the wrong podcast — can be disqualifying.

The purpose is to protect the defendant’s right to a fair trial by an impartial jury by eliminating those who may have formed an opinion about the guilt or innocence of the defendant without benefit of hearing the testimony and other evidence.

Exactly what baseline knowledge of Epstein or Maxwell will be allowed hasn’t been established. In one instance, a seemingly innocuous encounter with Epstein disqualified a prospective juror last week: An unidentified “middle-aged man” told Judge Alison Nathan that he had a “30-second” interaction with Epstein in a Manhattan office building when being introduced by a mutual acquaintance years ago, as per the New York Post.

That a prospective juror happened to have met Epstein is an unlikely if unremarkable coincidence; it’s certainly possible in New York, where Epstein was born and lived most of his life.

Finding New Yorkers who haven’t met him is easy. But finding someone who hasn’t heard of Epstein — or read about him, or formed some opinion about the case based on what they’ve heard — will be difficult.

Allowing lawyers on both sides to weed out everyone who’s read or heard about the case is not Nathan’s job, said Jennifer Rodgers, a lecturer at Columbia Law School and a former prosecutor in the Southern District of New York. Nor is it required to seat a jury comprised of blank slates unfamiliar with Epstein for Ghislaine Maxwell to enjoy a fair trial.

“I think there are actually a lot of people who won’t know about her,” said Rodgers, who was chief of the organized crime unit during her time in the US Attorney’s Office.

“I think everyone will have heard of Jeffrey Epstein,” who is without a doubt “the elephant in the room,” she said. “He’s the real bad guy,” but he’s not on trial, she added. “That’s the real issue here.”

“You’re not looking to seat a jury who’s never heard of Maxwell or Jeffrey Epstein,” she added. “You wouldn’t even try for that. You’re just looking [to disqualify] people who know too much, or feel very strongly.”

Though Maxwell’s star-studded life is literally straight out of tabloids — her father, Robert Maxwell, who died in 1991 in questionable circumstances, was the longtime owner of the British newspaper The Daily Mirror and, very briefly, the New York Daily News — the public’s fascination and revulsion have focused on Epstein.

It’s Epstein who was convicted in Florida in 2008 for sex crimes involving underage girls prior to his release and alleged reoffending. And it was Epstein’s persistent and intimate connections to worldly elites, including former presidents Donald Trump and Bill Clinton, Microsoft founder and chairman Bill Gates, and Prince Andrew, that raised serious and uncomfortable unanswered questions.

It’s Epstein’s looming shadow that has dominated headlines in the more than two years since his arrest in July 2019 — when he was again charged with lewd acts on a minor — and, a month later, his death in a Manhattan prison cell, which many view as deeply suspicious. 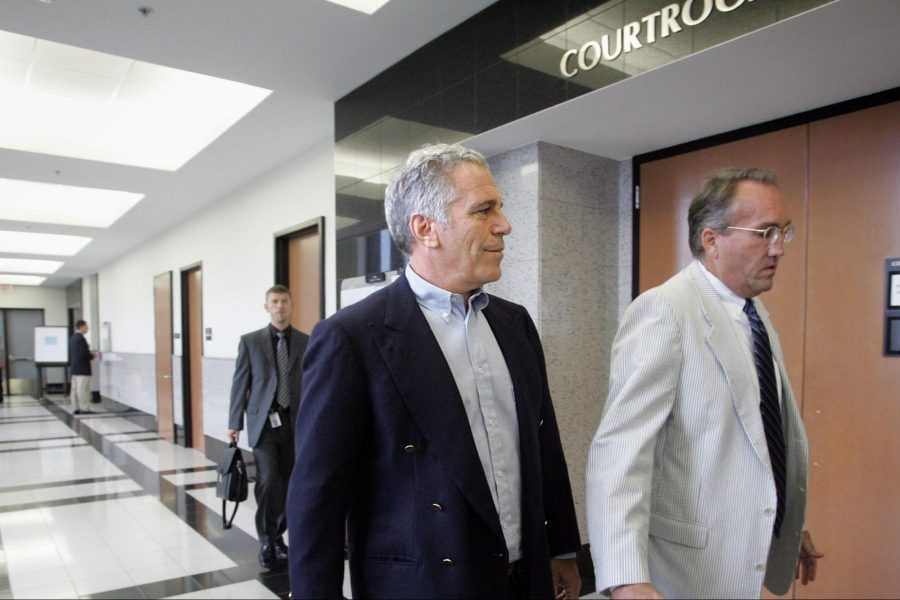 On June 30, 2008, Jeffrey Epstein (left, with his attorney, Guy Lewis) pleaded guilty to state charges of felony solicitation and procuring a person under the age of 18 for prostitution. He was sentenced to 18 months in prison in West Palm Beach, FL, but allowed work release six days a week. Photo credit: © Uma Sanghvi/The Palm Beach Post/ZUMApress.com

Once the trial begins, Maxwell’s defense attorneys will likely “try to separate her from him” and do what they can to make the trial appear to be a “proxy prosecution,” Rodgers said.

The prosecution will have to steer clear of Epstein and be careful to stay focused on Maxwell — and in this, they may have “help” from the judge, whose task will be to keep the trial focused on the charges against her. All judges hate having a case they tried reversed on appeal, Rodgers noted, but Nathan has extra motivation after the Biden administration nominated her for a seat on the US Circuit Court of Appeals on November 17. Presiding over such a high-profile criminal trial with a pending nomination to the bench that would hear any appeal means she will be on even higher alert to prohibit questionable evidence or procedure.

“I think she will try to keep the prosecution in line in terms of not trying to go overboard with what Epstein did — to try and dirty up Maxwell by association,” Rodgers said. “Some of it is going to have to come up in her activities to help him do what he wanted to do. But I do think the judge will keep a tight rein.”

In this instance, the atomized information age is a benefit. Distractions competing for the public’s attention abound. The atmosphere is far removed from the mid-1990s, when O.J. Simpson jokes on Saturday Night Live bookended wall-to-wall coverage of the trial during the week. Today, it’s easy to consume media continuously and never hear a word about Epstein — but it’s also possible for a news junky to dive head-first into a Maxwell and Epstein swamp. And that’s who won’t serve on the jury.

“It’s not like you can say that this case has been in the news 24/7,” Rodgers said. And “it can’t be that we can’t try Maxwell anywhere,” she added. “You’re just looking for jurors [to disqualify] who are obsessed with it.”