33-year-old Alina with her family waiting for the train to Southern Ukraine, where she was supposed to change and go to the Kharkiv region. Photo credit: Stefan Weichert / WhoWhatWhy
Ukraine

The War Isn’t Over, But Ukrainians Are Heading Home

It was the close encounter with death that finally compelled Alina, a 33-year-old mother of two, and her family to flee the war in Ukraine.

Near the end of March, a Russian cluster bomb hit their village near Kharkiv in eastern Ukraine. The bomb destroyed part of their house while they were in the basement hiding, said Alina, who declined to provide her last name for security reasons, recounting the story as she and her family waited for a train back home at the railway station in Lviv after less than a month as internally displaced refugees.

Then, it was time to leave. Now though the war is not yet over, and though there is clear evidence of widespread Russian war crimes committed against civilians — and analysts expect Russian President Vladimir Putin to renew his nearly two-month-old invasion in the contested eastern part of the country — it is already time to return.

UNHCR, the UN refugee agency, estimates that 4.8 million Ukrainians have left the country since the Russian invasion began Feb. 24. Many more, like Alina and her family, are internally displaced. The International Organization for Migration, IOM, estimates that 6.48 million people — out of a total prewar population of 44 million — are internally displaced inside Ukraine.

But now that the fighting in some parts of Ukraine has diminished, particularly around the capital Kyiv, people are starting to return to their homes. As of the beginning of April, more than 620,000 Ukrainians have come back from abroad, as Andriy Demchenko, spokesman for the State Border Guard Service, told Ukrayinska Pravda. 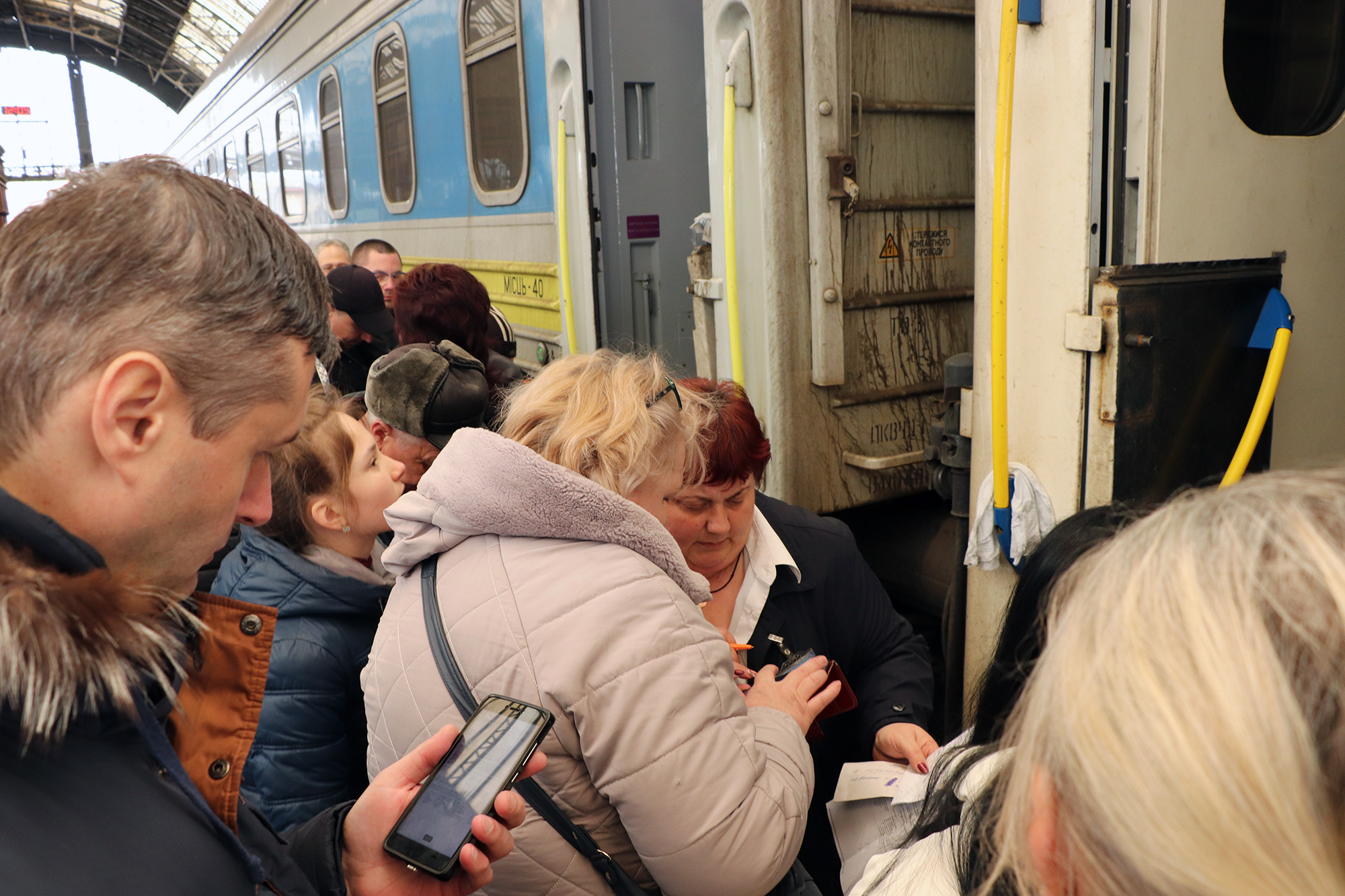 Many people are trying to get home. Lviv Station is full of people both going home and fleeing war. Photo credit: Stefan Weichert / WhoWhatWhy

The situation in Alina’s home village Dergachi hasn’t improved much. There is fighting only three miles away. There are frequent air attacks. Their house is also still damaged from the war. However, she and her husband and two young children are tired of running and have decided to go home.

“There is nothing better than home,” Aline said, “My parents are there, and I have to come back to them.”

The plan is to go to a friend’s house in southern Ukraine first, and then go to Kharkiv where, Alina believes, hope against hope, the fighting will be over “in a couple of days.”

Alina stands on the platform with the family’s luggage, consisting mainly of some clothes and some food.

“I guess that there are just different types of people. Some need to run and be in a safe place and stay there, but we just want to come back,” said Alina, holding her 10-month-old daughter Eva in her arms. “Not everyone dies in a war, so I just hope that we will survive.”

No Peace Before Return

WhoWhatWhy met 63-year-old Alla at the train station in Lviv. She also didn’t want to provide her last name due to the uncertainty in the war. She had fled with her son, his wife, and their ten-month-old child at the beginning of the war, but now she has decided to go back to Kyiv. Her son has tried to stop her, arguing that it isn’t safe yet. She doesn’t care. 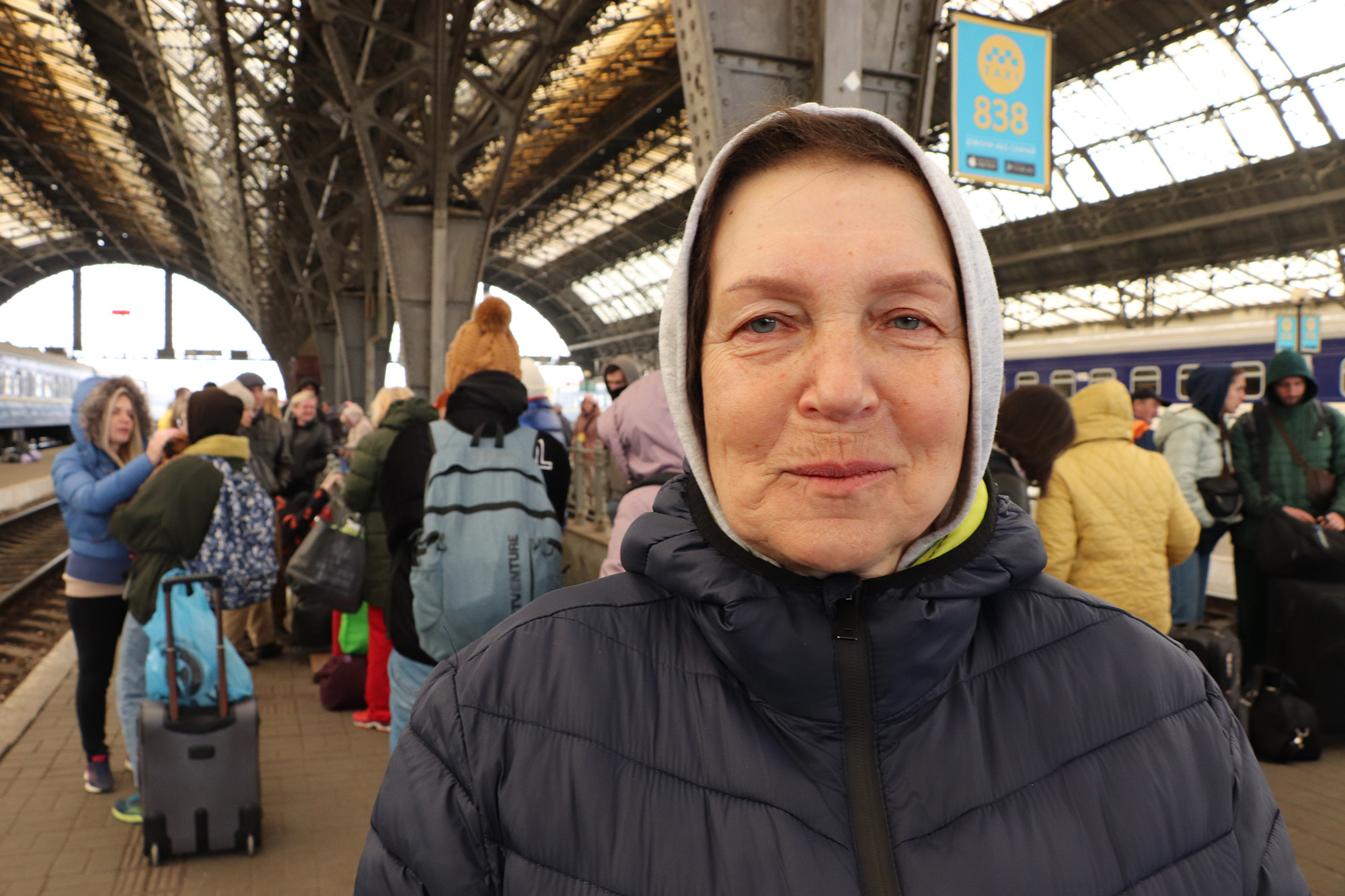 “My son and his wife don’t want to go because they are afraid and have a small child. I understand that, but I want to go back to normal,” she added. “I just want to be home. We cannot all just leave.”

Many of the people WhoWhatWhy met at the central station in Lviv say that they are tired of being on the run. While it might be risky, it is better to be home than sit and follow everything from a distance. Others say that they are going home as refugee life is difficult. It is hard to find places to stay.

Places to Sleep Are Scarce

Ternopil Charitable Foundation Caritas is one of the many organizations in western Ukraine helping refugees to find a place to sleep. One shelter is located in a local church, where around 50 people are sleeping in what used to be conference and computer rooms. The church has redone several rooms to accommodate as many refugees as possible. They are close to maximum capacity and, therefore, also help refugees find shelter in other places in town. 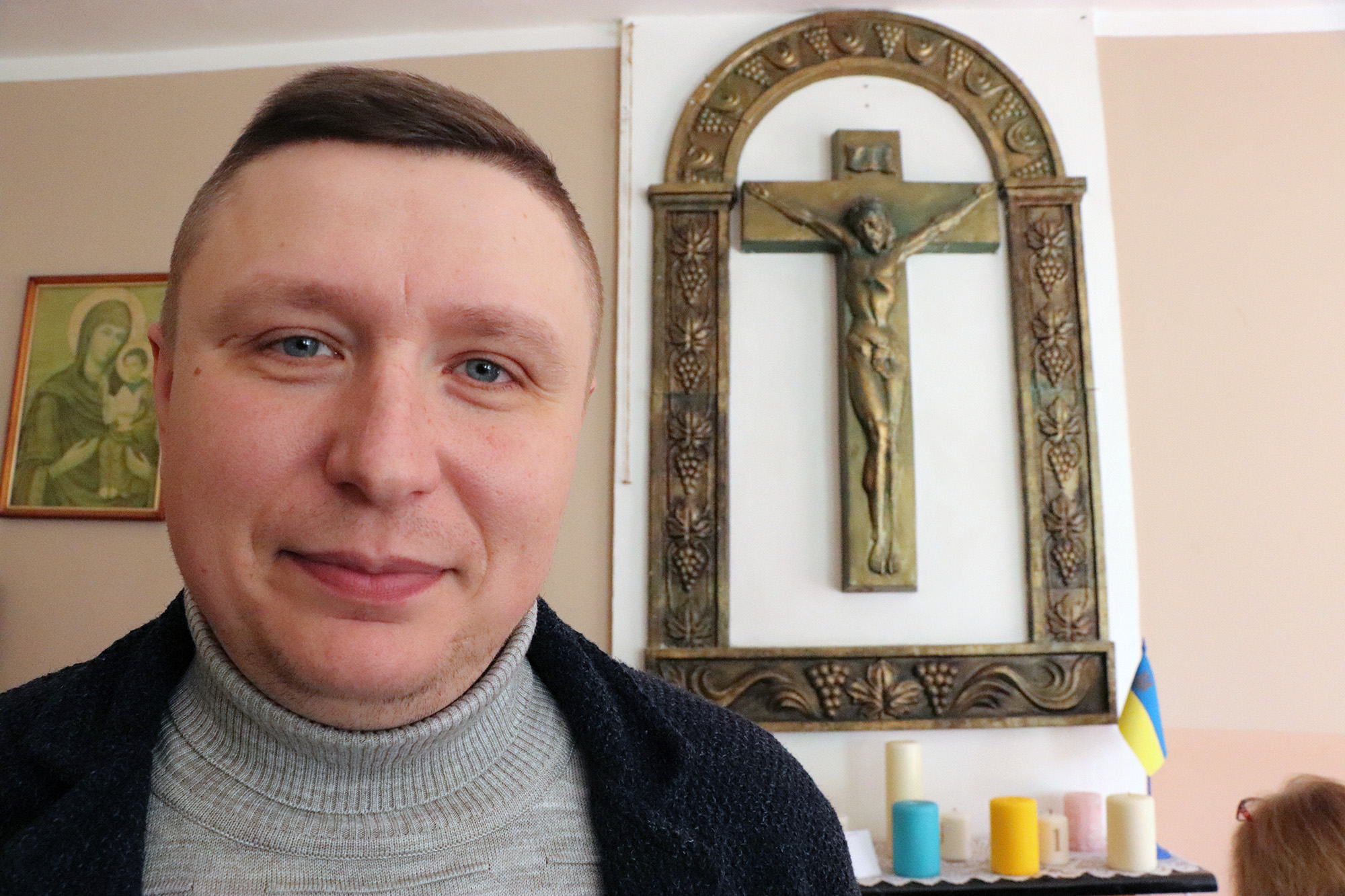 In the church’s yard, they have put up tents to distribute food, medicine, and clothing. Roman Zagorodny, who is the director of Caritas, said that they have helped 4,000 refugees so far with everything from shelter to clothes and food.

Refugees are eager to return home despite the fact that they are returning to the same dangers they fled from, he said. After Russia’s recent reversals on the battlefield, many are optimistic that Ukraine is winning the war, Zagorodny added.

“It is very different what mental state people are in when they come here,” he said. “Some fled very early and did not witness so bad things, while others have seen their neighbors murdered and their houses destroyed. It is much more difficult for them and they need a lot of help to recover. They are very scared and respond sharply to sirens and noises.”

Russian airstrikes are not common in western Ukraine. It is much different in the east. 49-year-old Elena is from Kharkiv in eastern Ukraine and is one of the people living here at the shelter. She said that she still hasn’t gotten used to the way that people in Western Ukraine react to sirens. Many people simply ignore it, but she runs to the basement every time as a reflex.

“I want to go home. My husband is still there, but there is still fighting going on, so I can’t go back yet,” said Elena, who fled with her daughter and granddaughter, “But there is nothing more that I would want more than that but it is too dangerous now.” 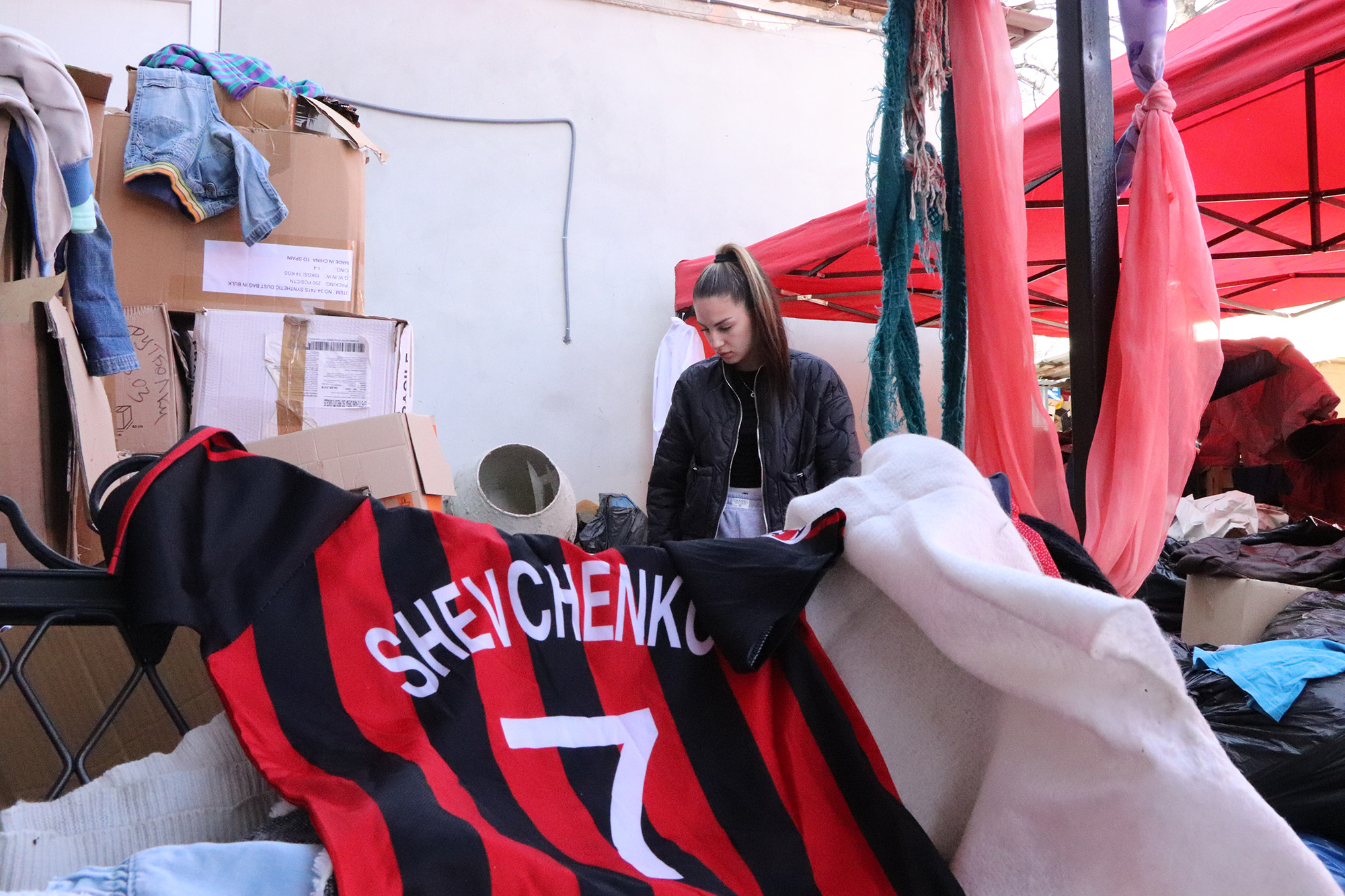 The church in Ternopil is full of refugees fleeing war. They have collected clothes, food, and medicine for them. Photo credit: Stefan Weichert / WhoWhatWhy

Nothing to Return To

Despite the prospect of a long drawn-out war, similar to the intermittent fighting seen in the eastern Donbas region since Russia’s 2014 invasion, Ukrainians want to return to Ukraine, war or no war.

A March survey by the Ukrainian Razumkov Center found that 79 percent of Ukrainian refugees abroad want to return home, with 11 percent unsure and only 10 percent set on staying away.

“The people who wanted to leave Ukraine and be in another country, have already left Ukraine before the war, so the ones who leave now want to come back,” Fedorchenko-Kutuev said. “As the Russian troops have been forced away from Kyiv, a lot of people now also find it safe to come back to home.”

“A vast majority of Ukrainians also believe that Ukraine will win the war, so they are confident to go back.”

Most Ukrainians, especially Ukrainians living in rural areas, are very attached to their land and have a real sense of belonging, he argued. That might make them ready to defy logic and even go back to areas that are not completely safe. He said that it is also easier to go back home than to start learning a new language and maybe change careers abroad.

But there are other more practical reasons for some refugees returning already: It is simply very expensive to be on the run. As everything has been booked in western Ukraine, where most refugees want to stay temporarily, costs including rents have skyrocketed despite laws prohibiting such profiteering.

“While there is financial help for the refugees going abroad, there isn’t the same help for people internally displaced,” Fedorchenko-Kutuev said. 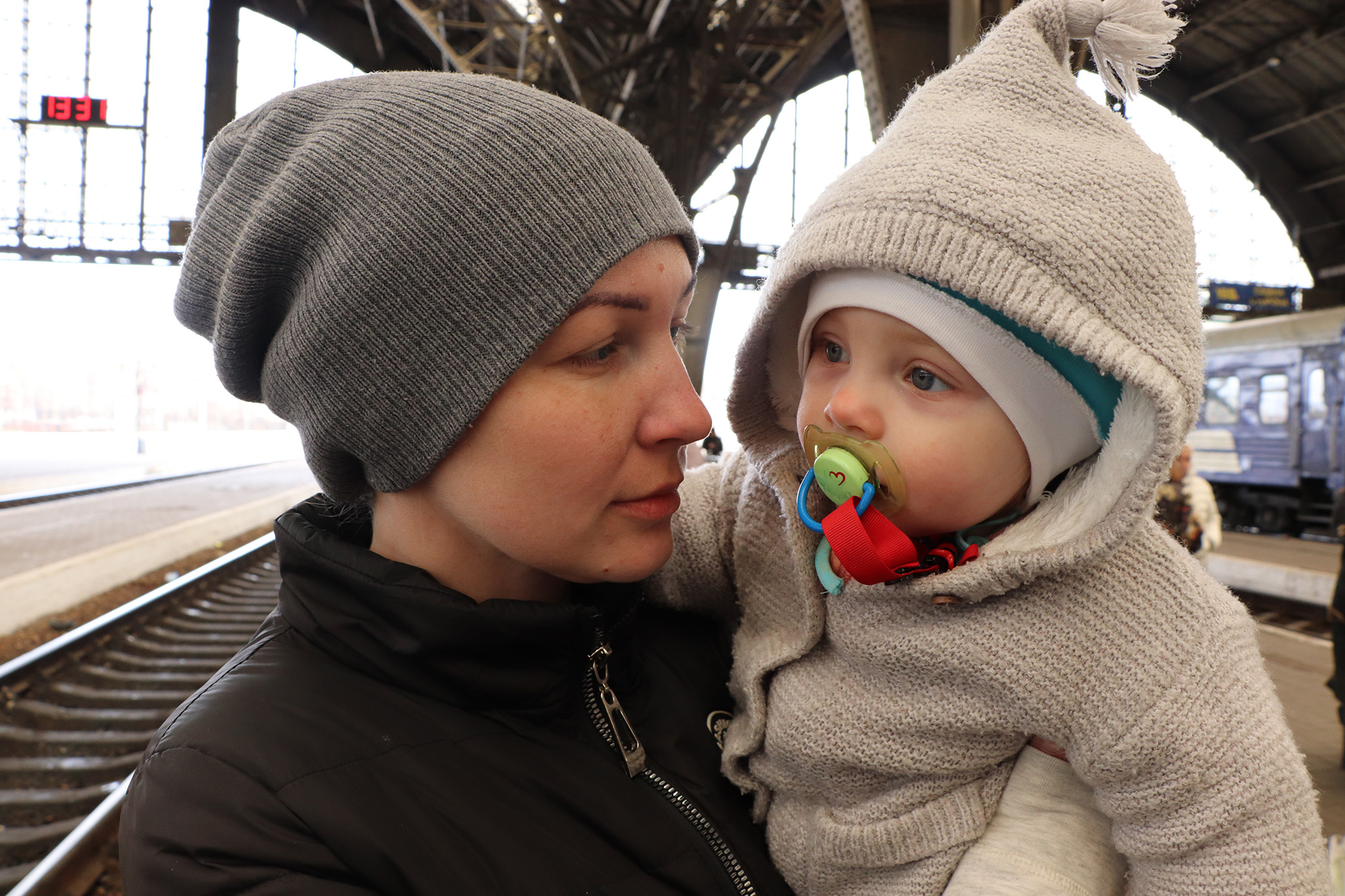 But while on the way, Alina and her family had to change their plans. Alina and her 10-month-old daughter took the train to southern Ukraine, where they were supposed to connect to Kharkiv in eastern Ukraine. A distress call from Alina’s mother changed their mind. Her mother told them to stay away.

“She told me that there are still active fights around our village, so we will have to wait a little longer,” Alina said a few days later via phone from Kryvyi Rih in southern Ukraine, where she and her family are now staying with some relatives. “We still want to go home but have to wait.”

Alina had high hopes to see her parents soon, but she doesn’t have the power to defy her mother. At least, they now feel more like guests, staying at their relatives’ place, than as refugees in western Ukraine.

“We still just want to go home. We are halfway now,” said Alina, who has a place to stay in western Ukraine but says that nothing can be as good as her home.

“I hope that we can be back in three weeks. We have to come back.”