Thousands Open Their Homes to Ukraine’s Refugees, Through Online Platforms

This story by Michaela Haas is being posted with the kind permission of the original publisher, Reasons to Be Cheerful.

#Ukraine We want to help!!

Where? A small city in Germany.

When? From now for as long as you need.

What? Free guestroom in our house with garden. Also food, clothing, medical care and more if needed. Animal friends are welcome, too. We can pick you up from a station or airport.

–– One of thousands of online messages posted on Host a Sister, a free accommodations platform.

As the war rages in Ukraine, an unending stream of horrific imagery flickers across our screens. But go to online platforms such as Host a Sister, Ukraine Take Shelter, Host 4 Ukraine, RefugeBooking, or many other small, local platforms, and you’ll be met with a very different sort of refugee-related content: Offers from people all over the world to help those who have been uprooted and displaced.

The outpouring of generosity, kindness and compassion is almost as unexpected as the war. When the Irish government set up a website for people to offer accommodation to Ukrainian refugees, so many hosts signed up on the first day that the website crashed.

“War brings out the worst and the best in people,” says Lynda Elliott, the founder of the Refugee Buddy Network.

Rashvinda Kaur, an avid traveler and daycare owner in New Orleans, started Host a Sister in 2019 after reading about female couch surfers facing sexual harassment. The online hosting platform connects women looking for friendships and a safe place to crash. In contrast to paid sites like Airbnb, all accommodations on Host a Sister are free — even bartering is frowned upon.

On its launch day, Host a Sister got 2,000 requests to join, and now the network is nearly a quarter-million women strong. “It was just supposed to be a fun thing, but it has evolved into so much more,” Kaur says via Zoom during her daycare lunch break. “Women helping women.”

Until two weeks ago, the site was mostly filled with images of lovely guesthouses in Italy, futons in Berlin, and joyful pictures of travelers celebrating their newfound friendships. Within hours after the Russian invasion, however, a surge of offers started filling the site:

“We have space for a mother and two children.” “Big house, big hearts.” Most of the pictures of guesthouses and futons are hashtagged #Ukraine.

“We didn’t sleep for 48 hours,” Kaur says of the initial days after the invasion. (The site is entirely volunteer-run.) “I was so worried I would miss a message from someone in need.”

Many refugees land in neighboring countries, especially Poland, where a million Ukrainians were already living before Putin declared war on their country. But potential hosts chime in from Madrid to Berlin, Italian hamlets and small villages in the South of France. Farmers in Alabama, mothers in Connecticut and dentists in Sydney have all posted offers of free accommodation, sometimes including generous assistance with travel fares.

“If you can make it to any international airport,” reads one post, “we can pay for a plane ticket to Texas.”

Where Ukrainian refugees actually end up will depend on individual countries’ policies. So far, a number of Western nations are taking measures to admit them. The EU is invoking an unprecedented little-known emergency rule that grants Ukrainians the right to immediately stay and work in the EU for at least three years.

In the US, the Biden Administration announced that the roughly 34,000 Ukrainians who arrived in the US before March can apply for temporary protected status so they can legally work and live there. The US has also signaled that, while it expects most Ukrainian refugees will stay close to home in Europe, it is open to expanding the number allowed into the US beyond current caps.

Host a Sister is especially valuable as adult men have largely remained in Ukraine to help defend their country, leaving fleeing women vulnerable to trafficking. Increasingly, even children and teenagers make their way across the border alone. Recognizing the vulnerability of the refugees, the administrators for Host a Sister have turned off comments on all Ukraine postings and discourage sharing location details. Kaur herself has received threats and noticed activity that points to Russian trolls and bots, so is asking everybody to communicate via private messenger and refrain from sharing screenshots.

Nevertheless, thank you notes speak to the success of the endeavor. “My sister is now in the safe hands of a fellow wonderful sister in Slovakia,” reads one that was sent to a host and posted on Host a Sister’s Instagram feed. “God bless you all and may you all never lack.” 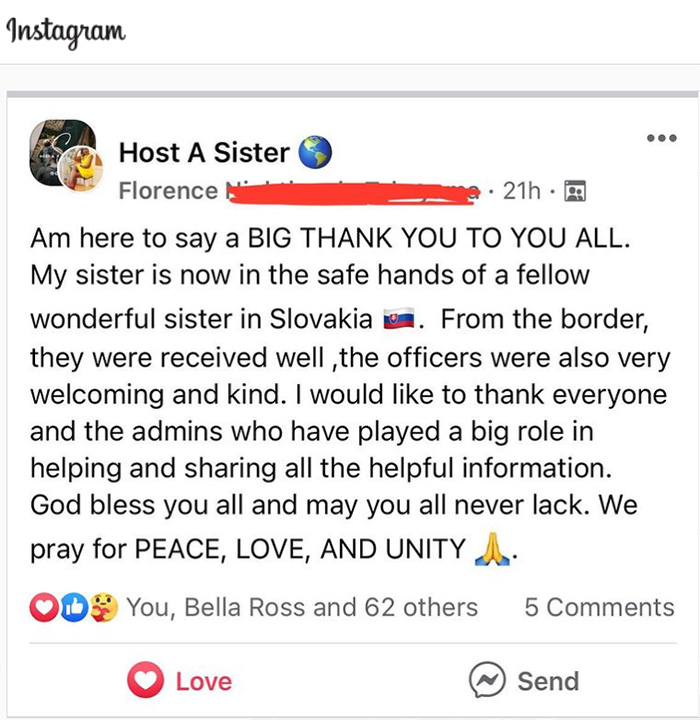 Other guest-hosting sites have sprung up specifically in response to the crisis. On Host 4 Ukraine, an initiative from Churchpool, a social media app for parishes, but with no religious strings attached, people of any nationality and gender can offer accommodation to those fleeing the conflict. The platform has been promoted by the United Nations High Commissioner for Refugees as a valuable tool for Ukrainian refugees seeking shelter.

The Refugee Buddy Network is another little-known grassroots organization that has been active for years. It is mainly propelled by refugees themselves, who use it to trade information and advice: leads on possible accommodations and jobs, tips on how to navigate the unfamiliar systems of destination countries, and general knowledge of resources that could be of use to someone in transit.

“I see mountains of donations going to landfill at the Polish border, while I am desperately trying to find resources for a Syrian family stuck at the border under a tarp with a malnourished baby they can’t feed.” — Lynda Elliott

“We are helping the minorities,” founder Lynda Elliott says, “The people with no voice.” As examples, she mentions a Ukrainian woman who is married to a Yemeni and currently stuck at the Ukrainian border, or the large group of Afghans who settled in Ukraine and are now being pushed to the end of the line.

“We see brown and Black people who are not allowed on buses and trains,” Elliott observed. “There is this otherism that is so entrenched.”

She makes an important point: While refugees from Ukraine are welcomed with chocolates and flowers, refugees from Iraq or Syria are still being blocked at the borders in some of the same countries, especially in Poland.

“I see mountains of donations going to landfill at the Polish border, while I am desperately trying to find resources for a Syrian family stuck at the border under a tarp with a malnourished baby they can’t feed.”

Elliott started the platform in 2016. A corporate consultant living in London at the time, she had no background in helping refugees. She was simply moved by the plight of the people that she saw in the news, especially from Syria, Afghanistan, and Somalia.

“I saw the images from the war and thought, somewhere over there lives a woman like me, with the same dreams and hopes I have.” 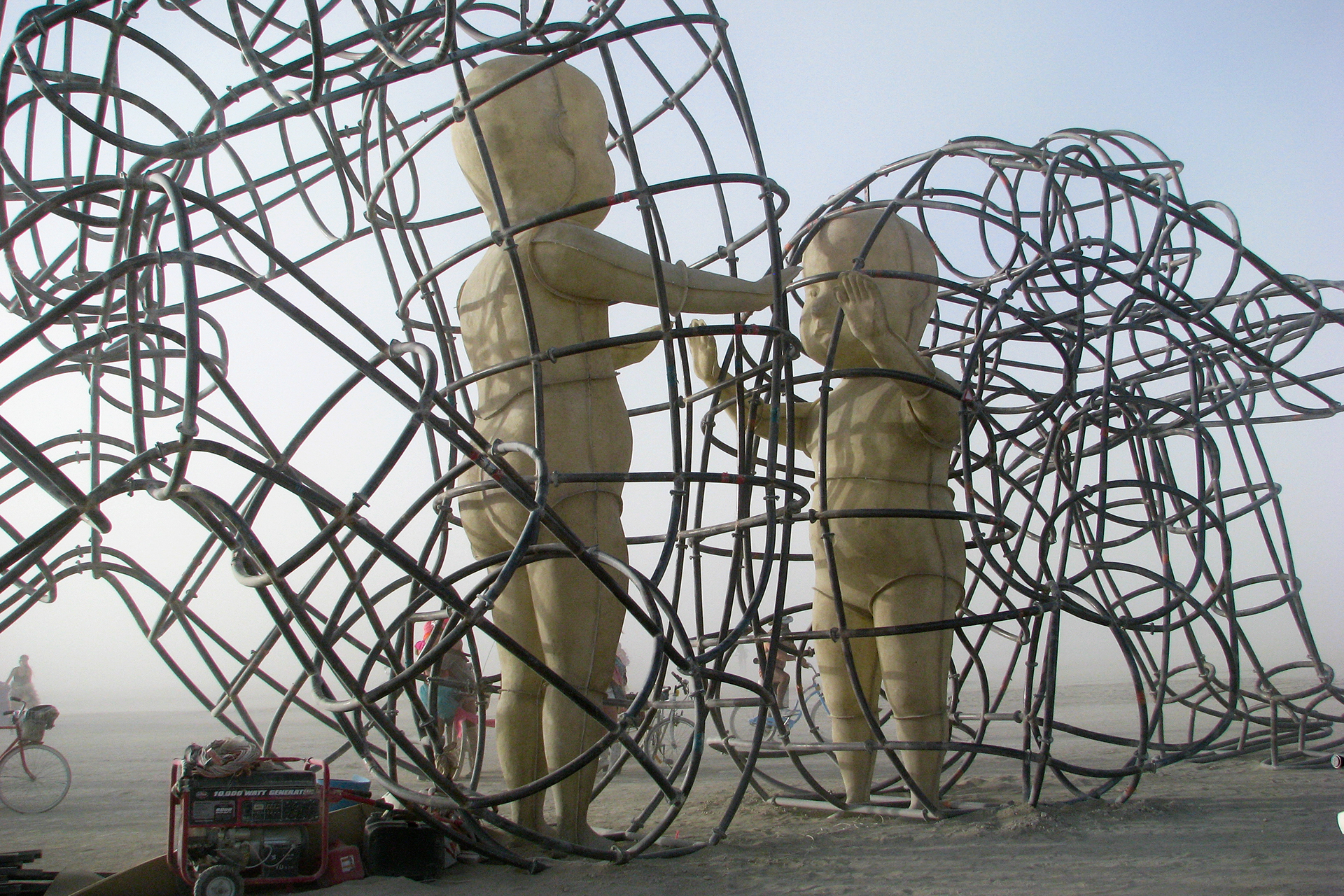 With no budget or nonprofit status, the Refugee Buddy Network quickly grew to more than 5,700 members. It is exactly what the name says: a network where refugees or their friends can post what they need — eye surgery, work, a safe place to stay, personal searches for separated family members — and others can provide whatever knowledge or help they can offer. Sometimes it’s money, usually small sums; more often, it is practical advice. Frequently, within a day the poster has found what they’re looking for. There were already a lot of Facebook groups when Elliott started hers. “But in many groups, people simply expressed their sympathy,” she says. “What we do is find refugees a buddy. What we hear most from refugees is, ‘I feel invisible, isolated. I have been forgotten.’”

“I’ve read posts from war refugees asking why countries that have closed their doors to them and their kids are now opening their borders for others. It’s so sad. Let’s focus on all the people who have no voice.” — Lynda Elliott

The unbureaucratic nature of these grassroots efforts leads to a little chaos and occasional mistakes. “Once I sent a small sum to a man who was posting as homeless but actually wasn’t,” Eliott says with a laugh. But to her, the many success stories outweigh the missteps. To mitigate errors like this, Elliott cooperates with local groups whenever possible, but her sprawling, decentralized network has the advantage of being everywhere and anywhere, a good fit for refugees who are often on the move.

As the world throws open its arms to the dislocated populace streaming out of Ukraine, Elliott emphasizes the commonalities inherent to the plight of all refugees, wherever they come from.

“It has been an intense week. It has been amazing to see the offers of support for Ukrainians coming in from all over the world. Not just governments, but normal people everywhere offering accommodation, financial help, psychological support, transport and more,” she says.

“I can’t help thinking that while the media and people around the world are laser-focused on this most recent war, there are other people who have fled wars in their countries over the last ten years, who appear to have become invisible and forgotten. I’ve read posts from war refugees asking why countries that have closed their doors to them and their kids are now opening their borders for others. It’s so sad. Let’s focus on all the people who have no voice.”