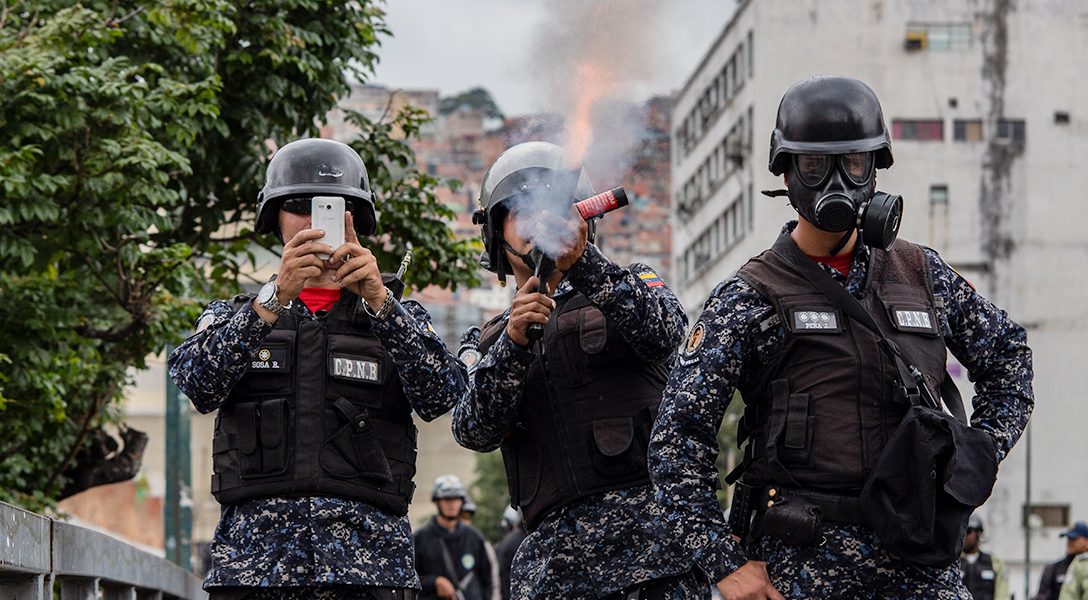 One soldier fires tear gas at demonstrators, while another shoots the scene with a mobile phone in Caracas, Venezuela, on January 23, 2019. In the midst of the escalating political crisis in Venezuela, many people have taken to the streets. Reports claim four people have been killed. Photo credit: © Rayner Pena/DPA via ZUMA Press
International

From the Washington Post: “Their letter calls for a Truth and Reconciliation Committee on the JFK, RFK, MLK and Malcolm X slayings.”

The author writes, “A prominent American-born anchorwoman for Iran’s state television says she believes the US government jailed her because of her work as journalist and her beliefs, and as a warning to her to ‘watch your step.’”

From Truthdig: “Brazilian politician Gleisi Hoffmann weighs in on the role the international petroleum industry is playing in Venezuela’s coup attempt, among other topics.”

The author writes, “Sen. Elizabeth Warren (D-Mass.) will propose a new annual ‘wealth tax’ on Americans with more than $50 million in assets, according to an economist advising her on the plan, as Democratic leaders vie for increasingly aggressive solutions to the nation’s soaring wealth inequality.”

‘A Coup Is Not a Democratic Transition!’ US Peace Activist Interrupts Pompeo Speech on Venezuela (Reader Luke)

The author writes, “US peace activist Medea Benjamin, co-founder of CodePink, called on her government to end its meddling in the affairs in Venezuela on Thursday — and called on other nations in the region to respect Venezuela’s sovereignty — as she interrupted remarks by Secretary of State Mike Pompeo during a meeting of the Organization for American States (OAS) in Washington, DC.”

She Participated in a Nepotism Audit. Then She Lost Her Job in California Government. (Reader Steve)

The author writes, “Socorro Tongco’s career investigating fraud in the workplace didn’t prepare her for the moment in November when her bosses fired her and alleged she misused her time as a state employee.”