A young girl waves a Palestinian flag from the hood of a convertible. Photo credit: Jeremy Lindenfeld / WhoWhatWhy
International

In response to recent violence between Israel and Palestine spurred on by Israel’s attack on Al Aqsa mosque and the continued campaign of Palestinian displacement in East Jerusalem, activists in Los Angeles took to the streets in solidarity — with both sides. 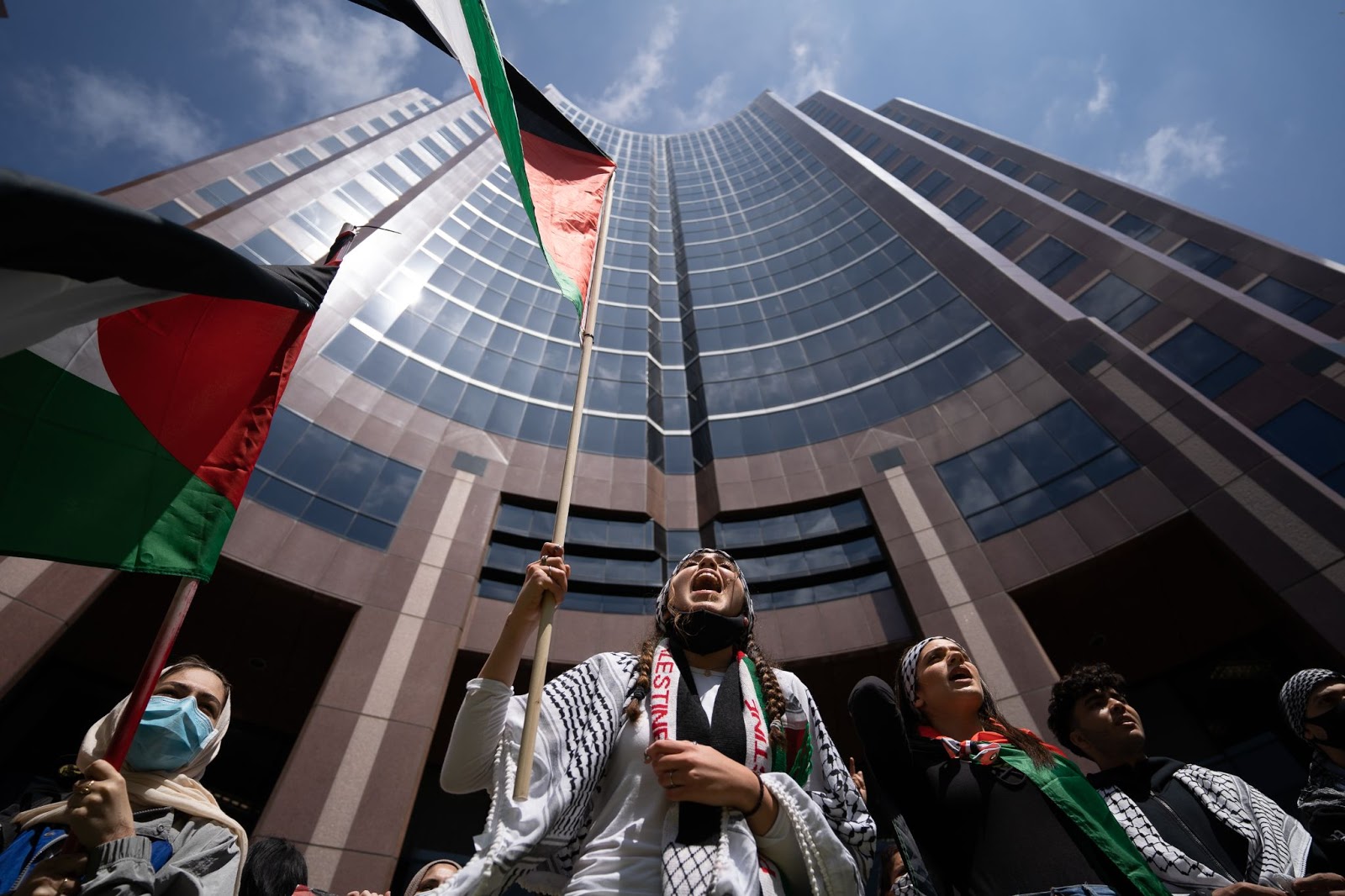 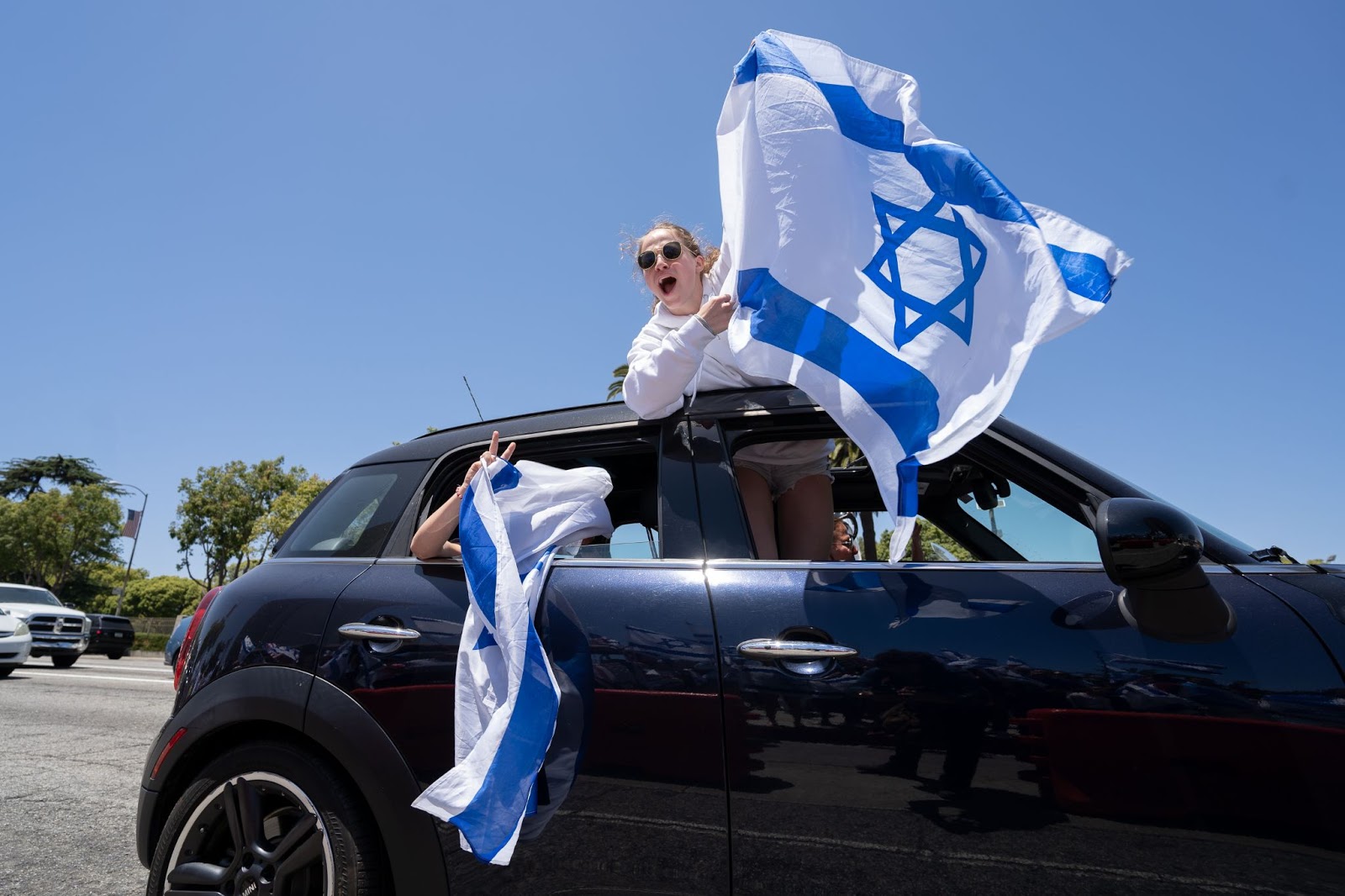 Throughout May, pro-Palestinian activists gathered at the Israeli Consulate in Los Angeles to demand an end to Israel’s occupation of Palestinian territories, their military bombardment of Gaza, and the US financial support of Israel. Large crowds of mostly young people chanted and marched through the streets of Brentwood. Police presence at these pro-Palestinian events was relatively heavy, with officers forming lines to prevent entry into prohibited areas. The “Free Palestine” bus, a repurposed school bus decked out with Palestinian flags and hand-painted slogans, was a staple at these marches, often being used as both transportation and an elevated platform from which protesters could participate in the action. 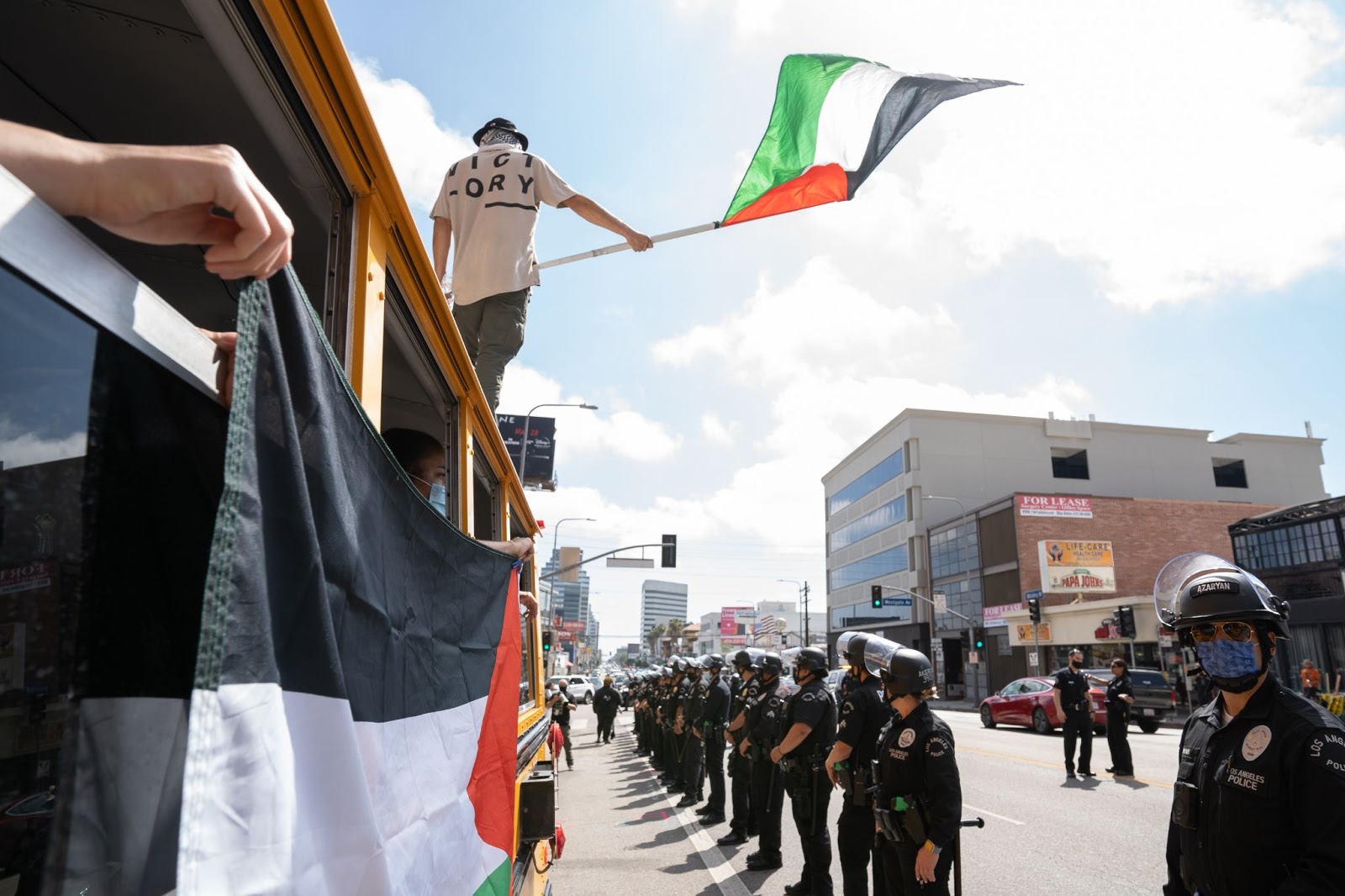 Protesters in and on the ”Free Palestine” bus face off against a line of police officers. Photo credit: Jeremy Lindenfeld / WhoWhatWhy 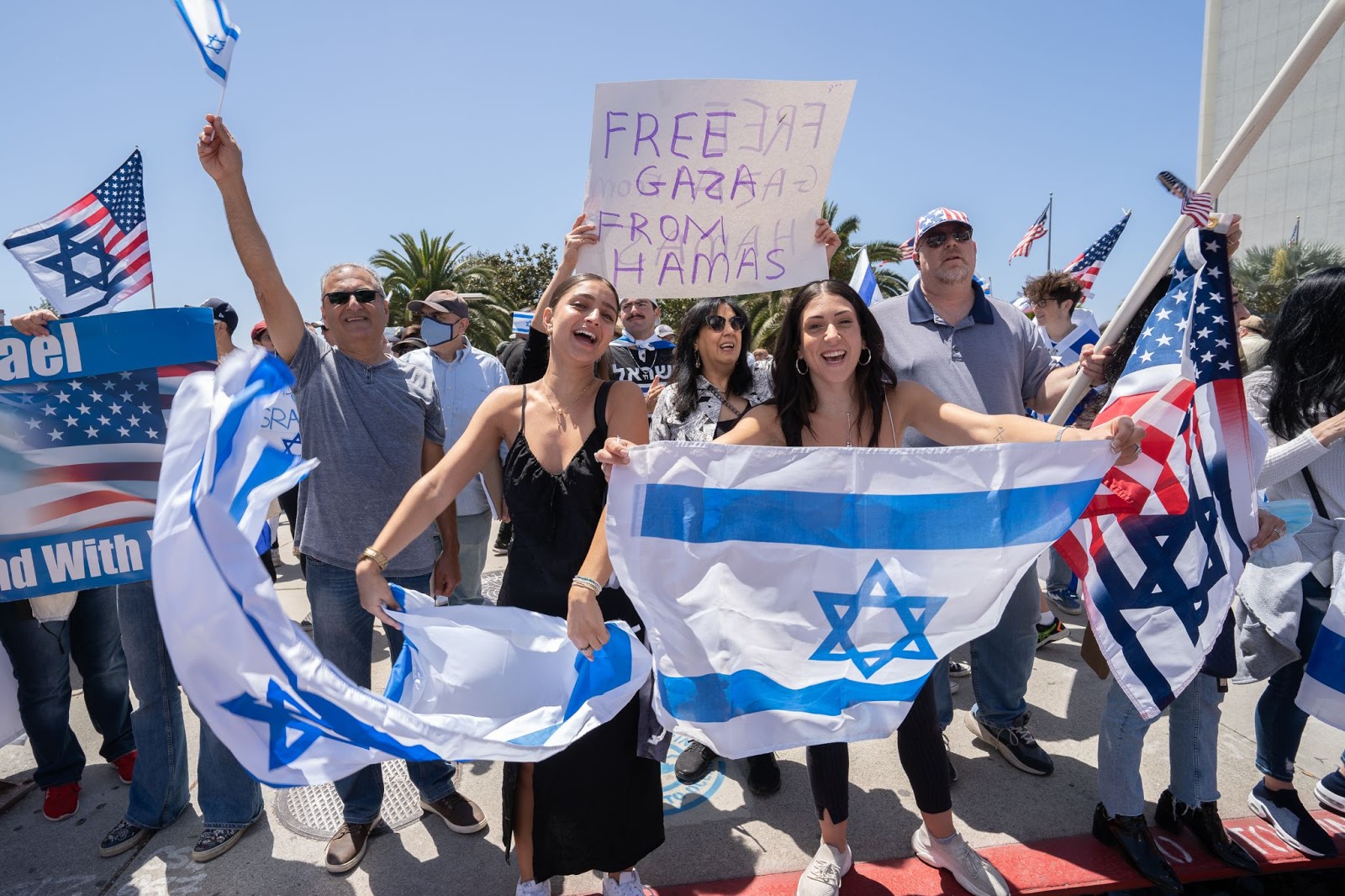 Whereas the pro-Palestinian protests often felt mournful, resilient, and defiant, those held in solidarity with Israel were noticeably more upbeat. Protesters danced to loud music, local politicians gave speeches about the United States’ unwavering support for Israel, and the Zionist chants came from a place of pride. 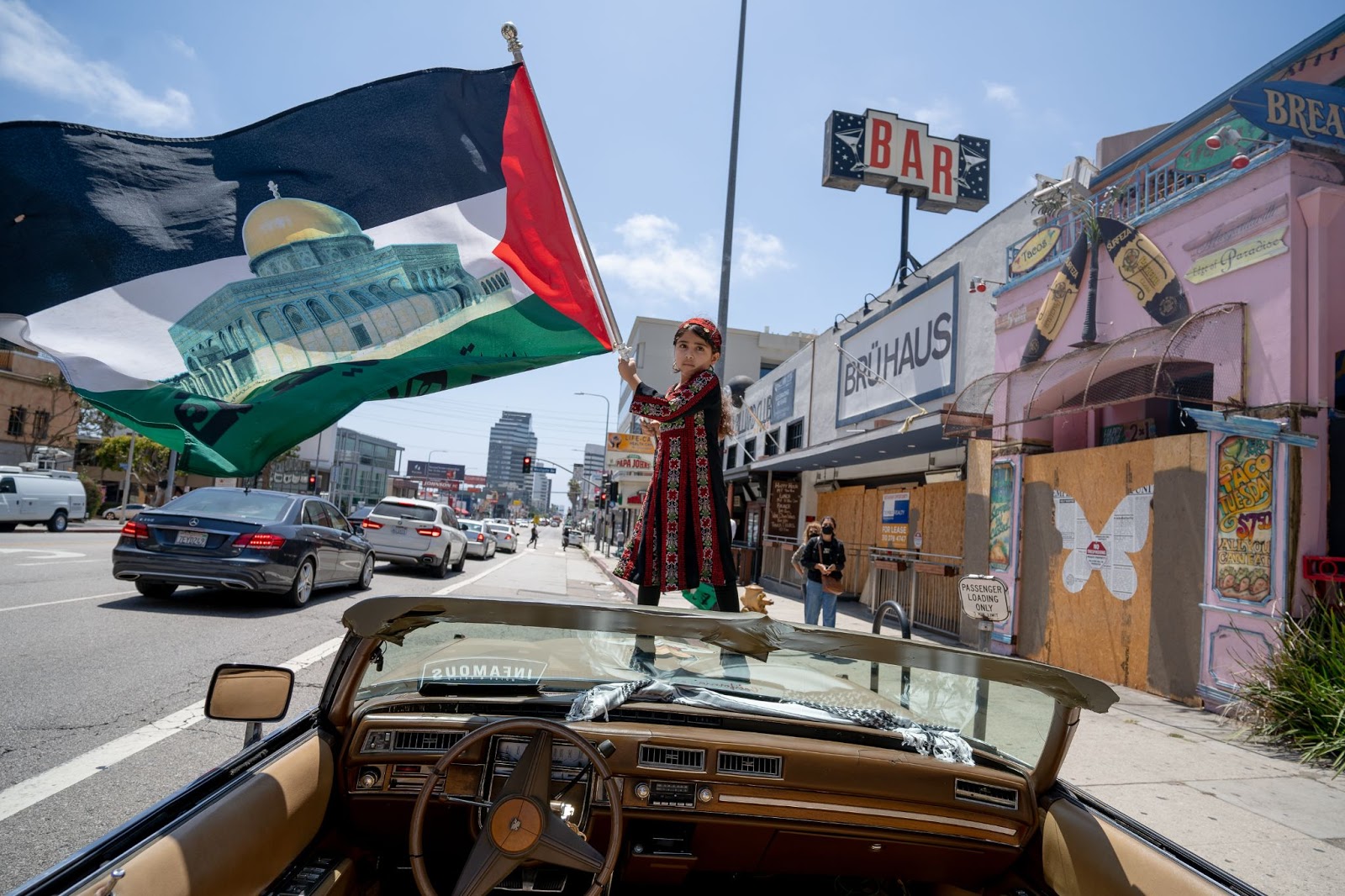 A young girl waves a Palestinian flag from the hood of a convertible. Photo credit: Jeremy Lindenfeld / WhoWhatWhy 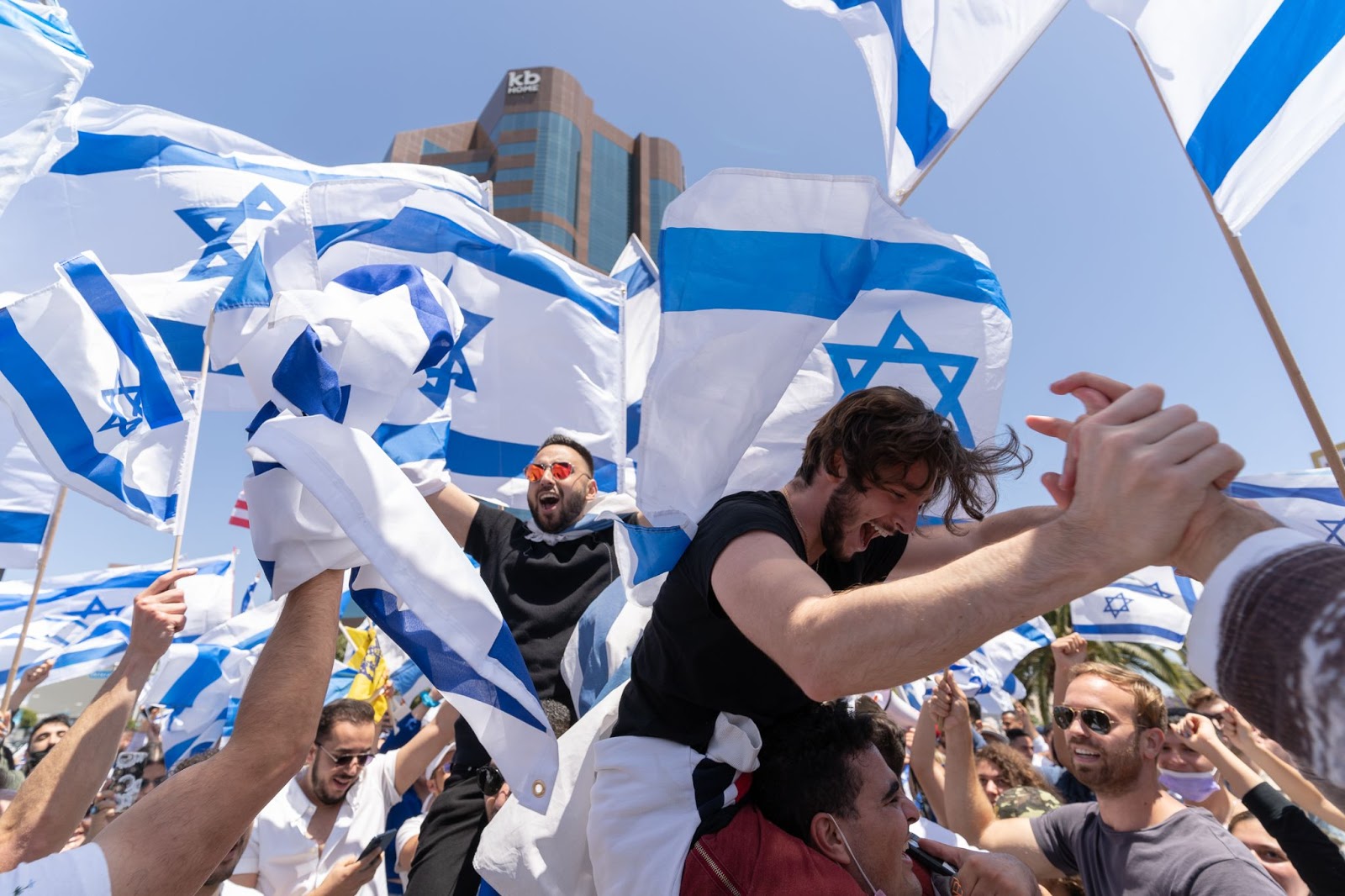 Zionist protesters cheer as they are hoisted onto the shoulders of other protesters. Photo credit: Jeremy Lindenfeld / WhoWhatWhy

In addition to the differences in atmosphere, the demographics of the events were also noticeably divergent. The pro-Palestinian protests were attended by a significantly more multiracial and progressive contingent when compared to the pro-Israeli protests, which attracted a whiter, more conservative crowd. Pro-Palestinian protesters often incorporated speeches that tied the experiences of people of color with law enforcement in the US to the daily struggle for Palestinian liberation overseas. Their pro-Israel counterparts meanwhile proudly waved American flags, wore Trump attire, and spoke about the “fake news media” siding with Hamas. 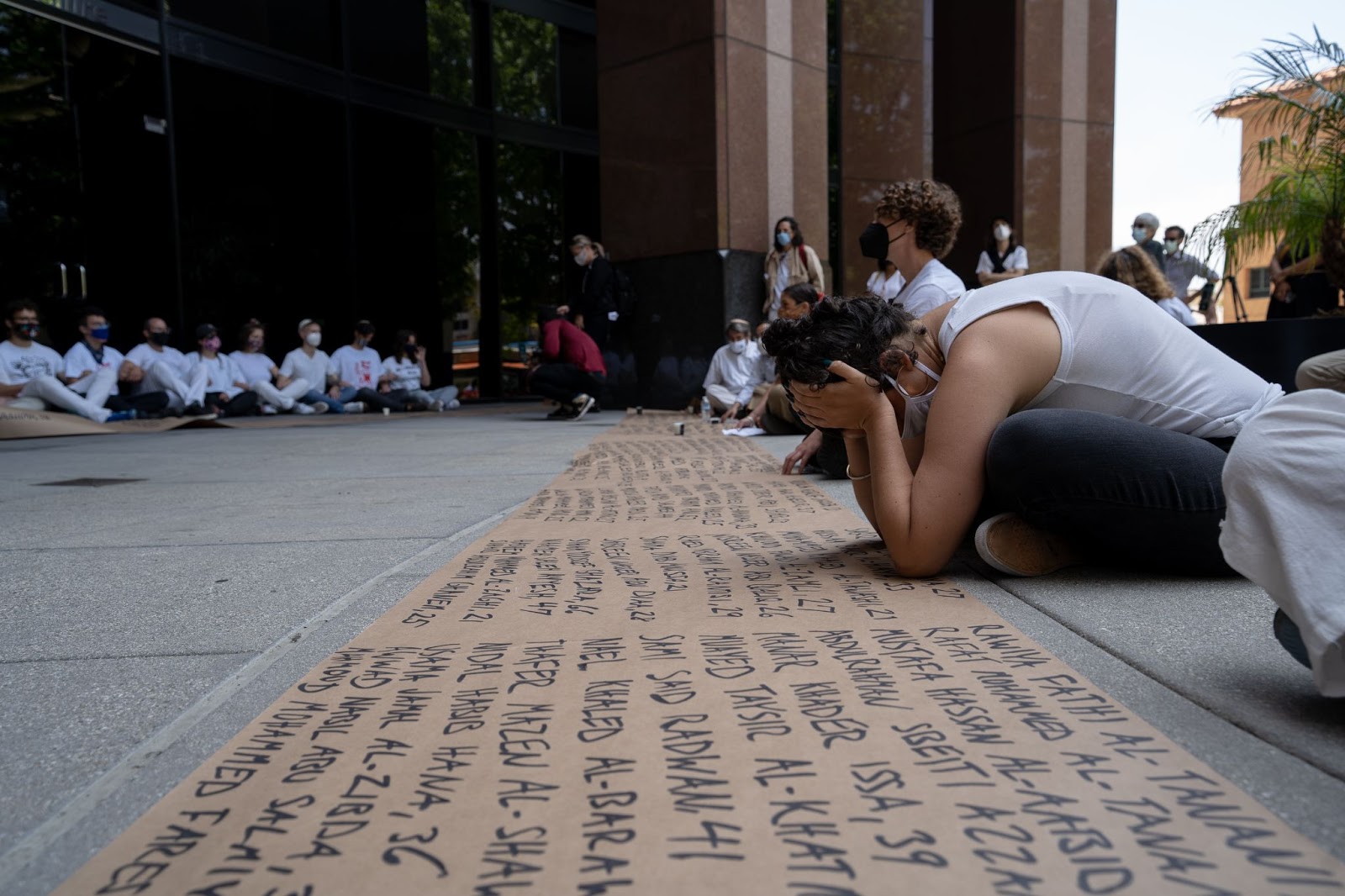 A member of IfNotNow holds her head in her hands as she leans on a list of the victims from the recent violence. Photo credit: Jeremy Lindenfeld / WhoWhatWhy 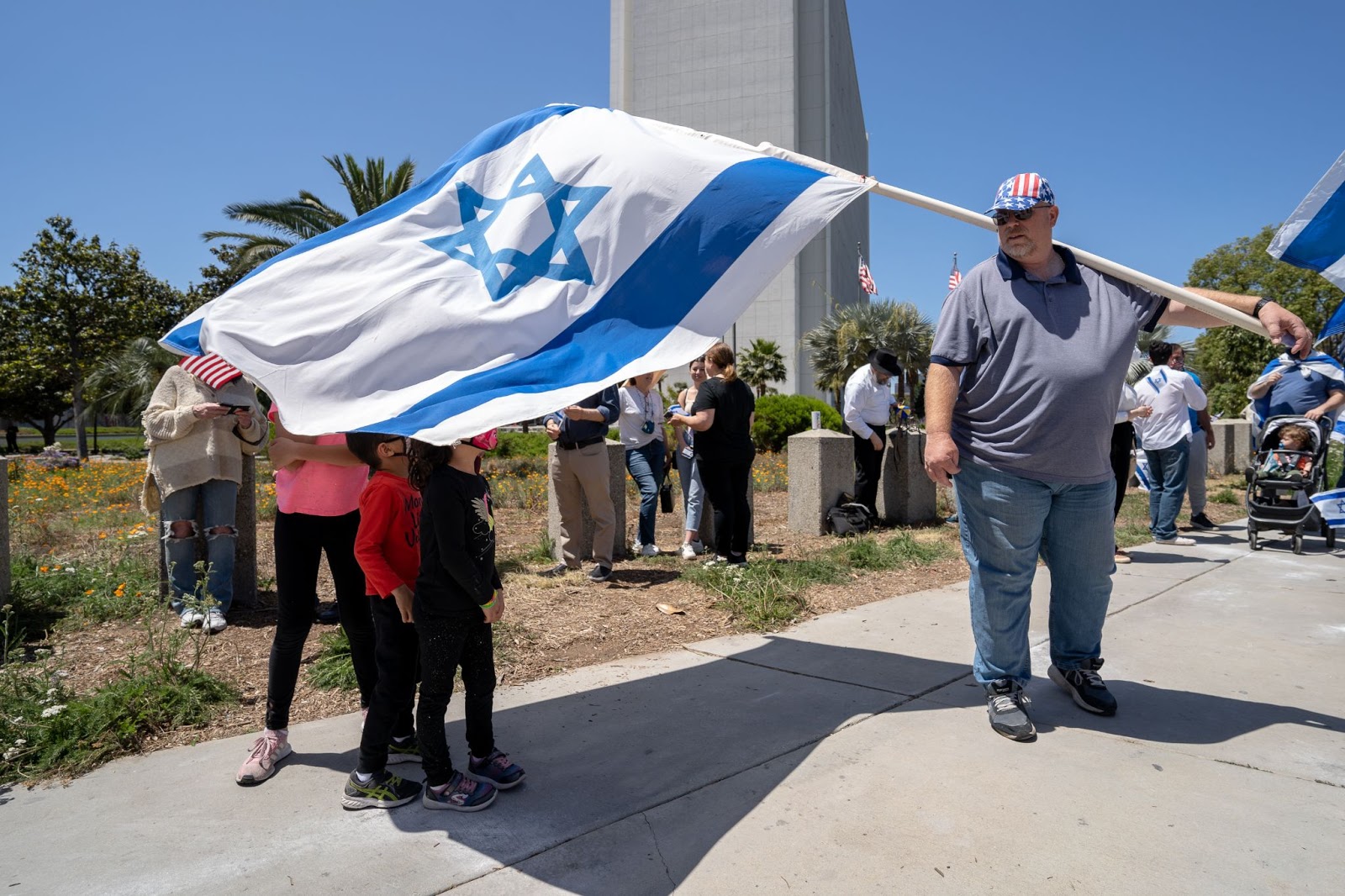 Notably, anti-Zionism seems to be, for the first time in recent memory, increasingly accepted as a legitimate political position among Americans. The complete ostracization that once came with siding against Israel has lost its teeth as the position has spilled over from exclusively leftist spaces into mainstream outlets like MSNBC. 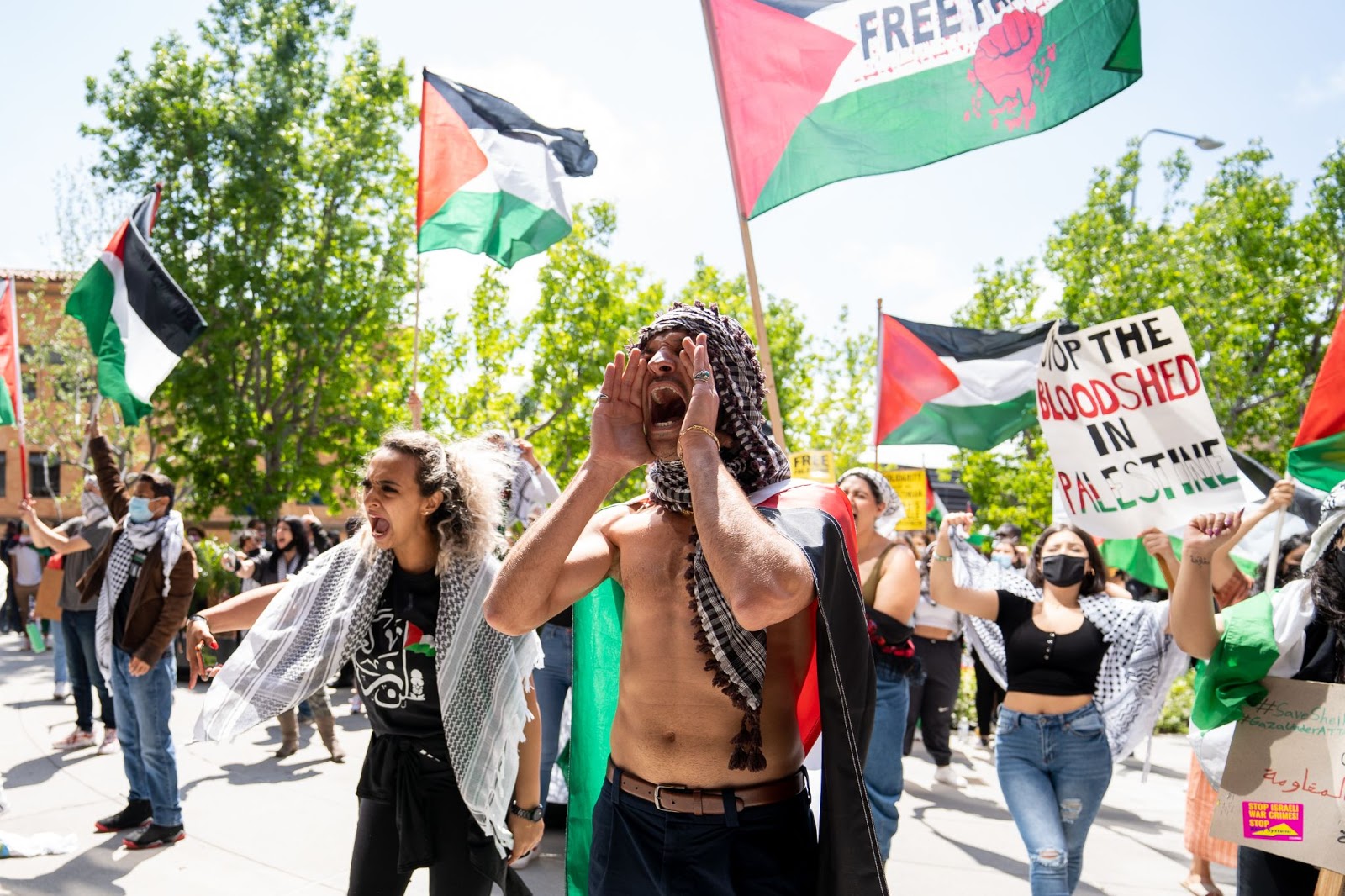 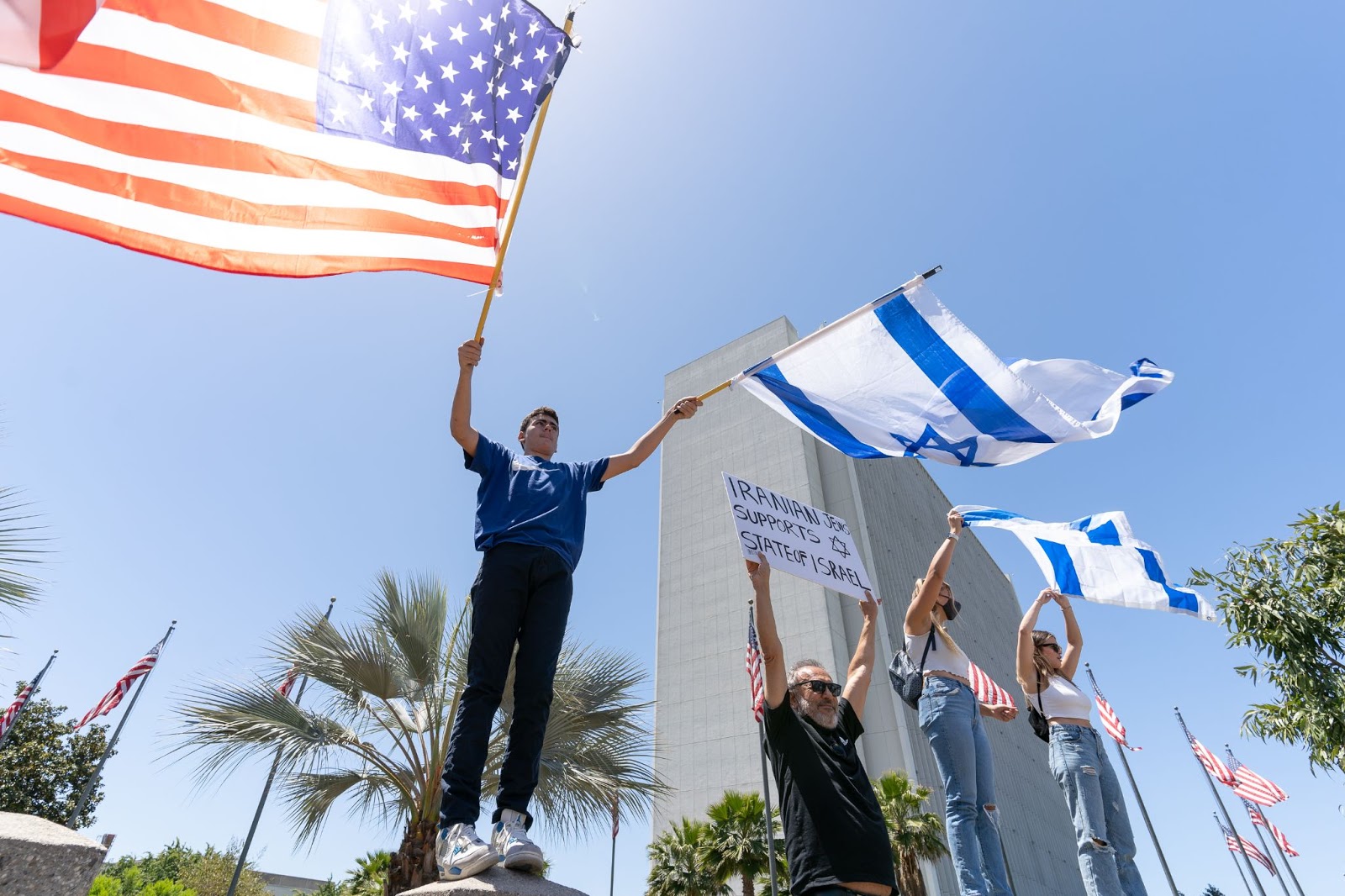