Among the Anti-Putin Russians on the Run in Tbilisi

TBILISI, GEORGIA — On February 24, the evening Russia invaded Ukraine, a few thousand locals gathered in front of the Georgian parliament in Tbilisi to protest. Among them were several dozen Russians. You knew at a glance they were Russian, because the signs they held said so. “I’m Russian,” one read (in English). “Sorry for that.”

Even before the war, this liberal, mobile, and disproportionately westernized group had understood that there was no future for them back home. As the full horror of the Kremlin’s plans — both for Ukraine and for Russia — became apparent over the following weeks, tens of thousands of fresh self-exiles joined them. In Tbilisi — the city where Stalin attended seminary in the 1890s before his revolutionary turn, capital of the country Vladimir Putin invaded in 2008 — this has created a bit of an awkward dynamic.

Through the end of February, despite videos of bomb-damaged Kyiv apartment buildings circulating on Telegram channels and the “F*** RUSSIA” graffiti appearing — in English — on buildings around Tbilisi, the attitude towards Russian speakers in the city remained largely unchanged. The self-exile community had not yet significantly grown. Volunteers willing to hold signs apologizing for the country of their birth at the nightly anti-war rally were easy enough to find. Several of the people I met out demonstrating expressed their guilt about protesting in peace and freedom abroad while a few thousands of their compatriots back in Moscow, St. Petersburg, and elsewhere risked almost certain arrest in order to express their dissatisfaction with their unelected leaders’ actions.

anti-war protests in Moscow today; people chanting "No To War!" newly passed legislation (signed into law on Saturday) makes it crime to call Russia's invasion of Ukraine a "war"– or an "invasion" for that matter. (source: https://t.co/HyElpDZptg) pic.twitter.com/GFQ3GMcgZN

However, about a week into the invasion, as the Kremlin criminalized the spread of accurate information — in official Russian parlance, the war cannot be referred to as a “war” and must be referred to as a “special operation” — and as Western sanctions began to cramp the lifestyles of the previously upwardly mobile middle class back in Russia, up to 200,000 Russians began arriving in airports from Warsaw to Bishkek, Kyrgyzstan. One-way, indirect itineraries from Moscow to Tbilisi had increased 10 times in price, at least when paid for in rapidly depreciating rubles.

At least 25,000 self-exiles came to Tbilisi. During the first week of March, they were suddenly everywhere. Craft beer bars previously dominated by Georgian — and even English — language conversation were now packed with Russians with well-groomed facial hair. Greasy-spoon dumpling shops in basements, formerly the domain of local men toasting chacha shots, were now filled with Russian families toting backpacks, looking for a cheap, authentic meal.

As more and more of their former fellow countrymen arrived, many of the earlier exiles began to feel less and less welcome. Reports began circulating of anti-Russian graffiti, Georgians lashing out at anyone who hinted at anything pro-Putin, and sudden coldness from grocery store clerks and baristas after hearing the first syllable of Russian.

Dima, who writes for an independent magazine, decided that it would be better to get out of Georgia. “It got tougher to find a place to live,” he explained from his new base in Central Asia. “People didn’t really want to rent to Russians, and we were worried that the wave of refugees might create some tension. With all the people coming in, prices were going up. And so we left.” 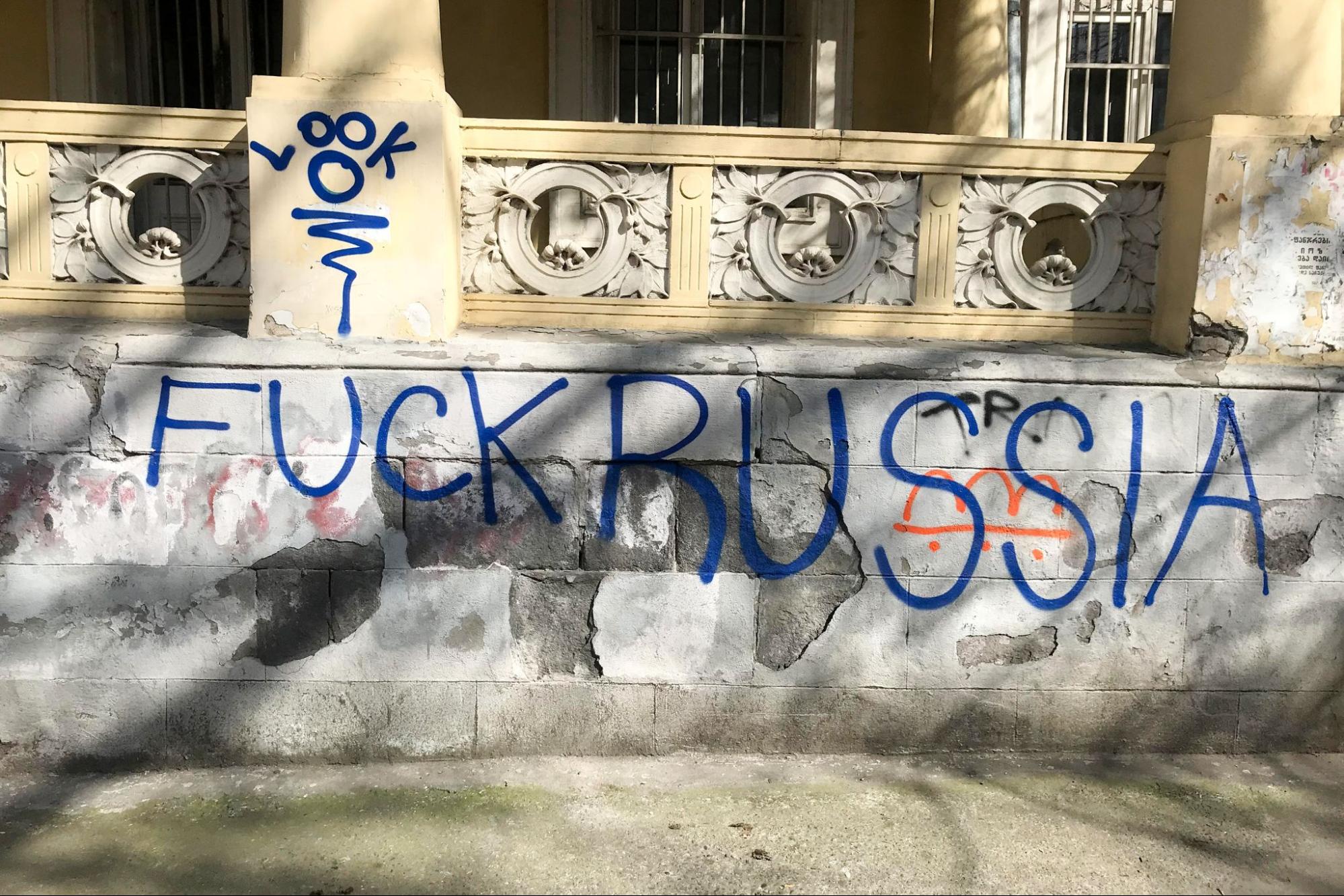 Vadim, an IT specialist who decamped to Turkey, shared similar sentiments. “People were starting to ask Russians why they were running away from Putin instead of fighting him. Look, I was against Putin before it was cool. I got kicked out of a good university for protesting the regime. I did two stints in jail for my political beliefs. I have a lot of respect for just how patient Georgians are with us even after everything that Russia has put them through. I just didn’t feel like having to justify my existence three times a day.”

Still, plenty of self-exiled Russians are staying put in Tbilisi, even as more of their former neighbors from Moscow and St. Petersburg continue to flood in. Aleksey and Yana are in Tbilisi precisely because of their opposition to Putin and his regime.

“We haven’t noticed a difference in the way our Georgian friends relate to us,” they explain together, taking turns to speak. “And in shops and cafes it’s the same. We’ve heard the stories about taxi drivers booting Russian passengers who were saying favorable things about Putin, and everyone who is looking for housing right now is having a hard time, but it’s not only Russians. We have Ukrainian friends who are struggling to find an apartment just because there’s so much demand right now. We haven’t felt any sort of Russophobia here.”

Other Russian speakers tell a slightly different story. Not too early on a recent weekday morning, Julia and Svitlana, coffee cups in hand, were walking along a backstreet not far from Liberty Square. Their conversation was about the changing dynamics towards Russian speakers in Georgia, and so I joined them for a block or two.

“I came here two months ago, before the war,” Svitlana explained. “Back then, cashiers and waiters would talk with me in Russian openly and normally. Now though, there’s a kind of awkward politeness, a coldness.”

“We’re from Belarus though,” Julia broke in. Belarus, of course, was in a way the first former Soviet bloc country to suffer Putin’s “Ukraine treatment”: after the obviously rigged elections in August 2020 that kept dictator Alexander Lukashenko in power triggered a massive protest movement, a subsequent vicious crackdown by state security forces, and, finally, a self-exile of democracy-minded, upwardly mobile Belarusians. “So when we tell them where we’re from, people understand immediately why we’re here, and everything is okay again.” 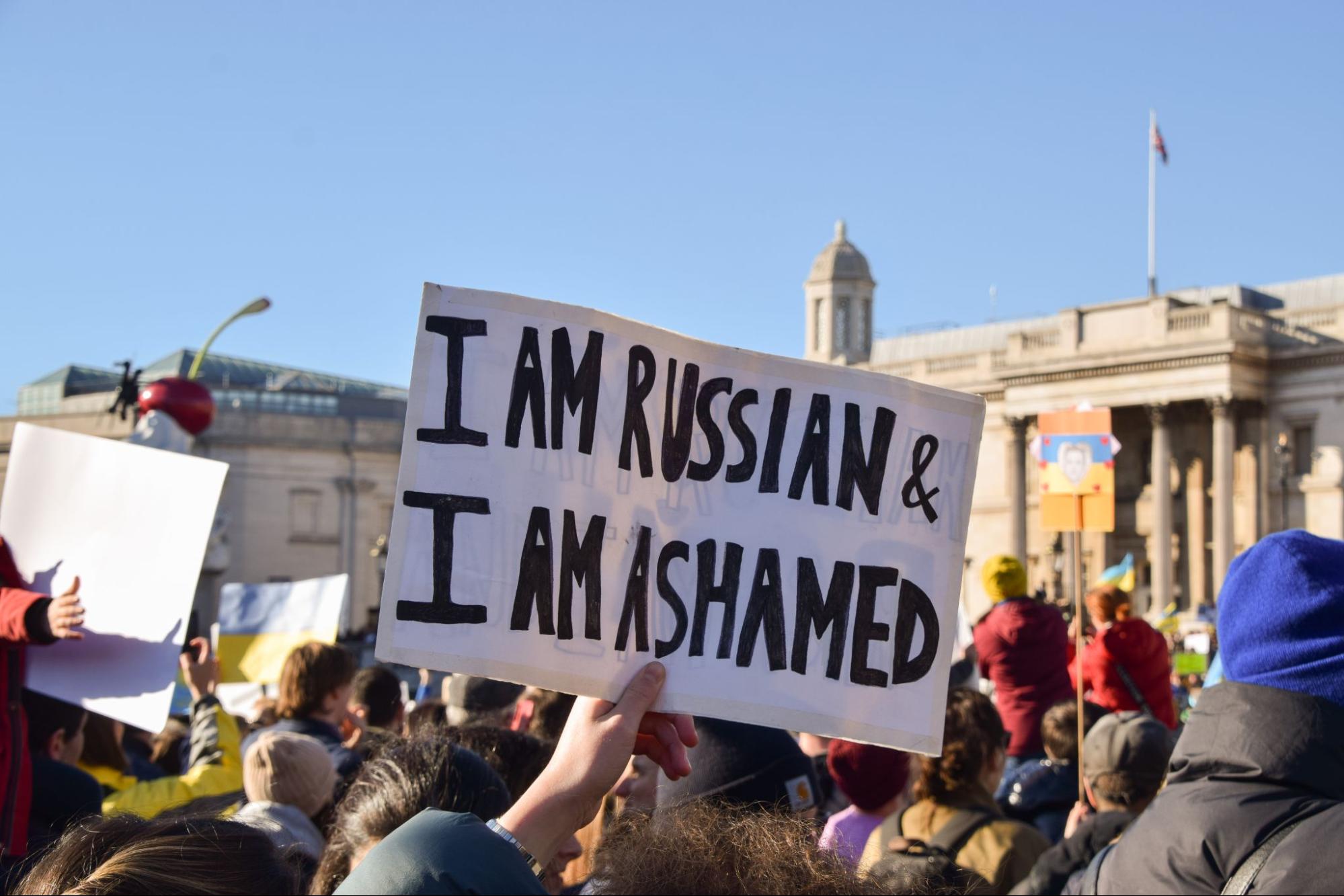 Despite occasional coldness from a supermarket cashier, most Georgians are open to accepting the well-dressed refugees. On the Ides of March, in the “public” section of one of Tbilisi’s cheaper sulfur spring bathhouses, I asked a table of tea-sipping bathers about their attitude toward the Russian influx. Of the 10-or-so mostly older men going from the sauna to the hot pool, to the cold shower, and then back to the dressing room for drinks, everyone other than me was a local. All of them understood why the Russians were coming — Putin and Putin’s war had made life in Russia intolerable for them — and all of them generally sympathized. But all of them had also noticed “a kind of formality, a closed-offishness,” even in their own interactions with the new arrivals.

The new arrivals have mostly failed to notice the cold shoulder. A few minutes after my talk with the tea drinkers, Leon arrived and undressed. He was by far the youngest bather present, and he was the only one covered in tattoos — one of which read, in fancy Russian font, “Moscow.” After he’d made his first trip through the hot-hotter-frigid gauntlet, Leon came back into the dressing room for a cup of tea. Impressively, Leon said his “thank you” in Georgian — madloba — rather than in Russian.

I turned the conversation towards the newcomer. Leon had arrived in Tbilisi only three days prior, and that he was already in love with the city. “It’s good that people are so accepting of us here,” he reasoned, “because Russians trying to escape don’t have a whole lot of options for where to go.” We exchanged phone numbers and promised to meet up for coffee sometime to compare notes on life abroad.

But Tbilisi, unlike massive, hypermodern Moscow, really is a big village. The afternoon after my soak and steam, my family and I were in the mood for a khachapuri lunch. We walked past Liberty Square to our favorite basement cafe, a place that had been full of locals when our landlord recommended it only two weeks prior. Now, on a sunny Wednesday, at a little after two o’clock, the place was absolutely packed with professional-class Russians.

We were going to have to wait for a table to open up. Then I saw Leon. He was there with a fellow exile, who had arrived a full six days prior. They invited us to sit down, and we did. Everyone shared their impressions about how dark things were getting in Moscow and about how comparatively bright the world looked from the Georgian capital. Everyone had ambitious plans for starting a “real life” in a free land. Almost everyone was ready to swear off Russia forever.

Maybe in a week, when Leon and I inevitably cross paths again, he’ll have come down a little bit from his fresh-out-of-Russia high. Maybe if he’d been here for as long as some of the departed exiles had been, he’d be more concerned about the anti-Russian graffiti and the rumors of microaggressions from the help. For now though, despite the relatively cold March weather, Leon is all sunshine. “This country is so wonderful,” he gushed over his plate of khinkali. “After everything Russia did to them, these people are still willing to take us in.”