The Sunshine State’s Dark Vision of the GOP’s Future

On May 4, 2020, Yahoo News published the political obituary of one of the Republican Party’s most promising young stars. Under the headline “How the coronavirus undid Florida Gov. Ron DeSantis,” lead political correspondent Alexander Nazaryan listed the sins that the nation’s youngest governor had committed that cratered his approval rating to one of the lowest in the country.

DeSantis was one of the very last governors to close —and then one of the very first to reopen — gyms, restaurants, and beaches, a COVID-19 shutdown that barely lasted a month. DeSantis made a childish mockery of masks and gloves on camera and declared the production of pro wrestling shows an essential business.

Compared to Democrats like New York Gov. Andrew Cuomo and California Gov. Gavin Newsom, whose quick and decisive coronavirus restrictions had put their national stock on the rise, the first-term Trump loyalist’s fumbling of the pandemic meant he was done — and this was before Florida recorded 12,000 new coronavirus cases a day in July.

A year later, on May 6, 2021, DeSantis, “ascendant,” as the New York Times called him a month earlier, appeared on Fox & Friends, the conservative Fox News Channel’s morning show and erstwhile personal soapbox for former President Donald Trump. After taking a swipe at the leaders of lockdown-happy states “with high unemployment, like California and New York,” the governor signed into law what he called “the strongest election integrity measures in the country,” all of which will make it harder to vote in Florida.

Even though the vote in Florida in November went so well DeSantis called it the “gold standard,” it was still necessary to impose new restrictions around mail-in voting, prohibit local elections offices from using private donations to pay poll workers or upgrade voting machines, and to empower potentially intimidating partisan poll watchers — for reasons that tie directly into the “Big Lie” insisting, somehow, Trump is the victim of election hijacking.

Labeling what DeSantis is doing as “voter suppression,” outraged Democrats immediately sued to overturn them, but “election integrity” was just the latest affront from DeSantis. A few weeks prior, the governor signed into law HB 1, a bill that effectively criminalizes peaceful protests like most of last summer’s demonstrations following George Floyd’s murder.

In addition to turning misdemeanors into felonies and creating new felony offenses, DeSantis’s bill, his top legislative priority, nakedly appeals to the far-right: Damage to Confederate monuments — even taking down a Confederate flag — is now a felony offense. It also affords legal protections for motorists who strike a protester with their vehicles while “fleeing,” as a white-nationalist sympathizer did in 2017 while killing an anti-fascist counterprotester in Charlottesville, VA.

Instead of a bizarre geriatric sideshow, good for laughs and memes, Florida is now a laboratory for a distinct vision of “democracy.”

According to the American Civil Liberties Union, there are now bills modeled after Florida’s voting restrictions in 40 other states, either proposed or on their way toward becoming law.

Whether the anti-protest HB 1 is copied in other states almost matters less than the example DeSantis is presenting: aspirational authoritarianism realized.

DeSantis is “criminalizing people just for disagreeing with him,” said Micah Kubic, the executive director of the Florida chapter of the ACLU. “That’s what’s going on.”

Bills restricting demonstrations aren’t new. Some were also introduced after the unrest in Ferguson, MO, and following pipeline protests. The difference is now 32 states have enacted them, including seven in recent months. “This feels like it’s gaining more traction,” Kubic added.

It’s important to remember how DeSantis accumulated the political capital necessary to punish his political opponents. All this followed DeSantis’s yearlong jeremiad against coronavirus restrictions: keeping schools open, welcoming revelers to Florida beaches and to Miami boulevards, banning businesses from requiring proof of vaccination, and suing the federal government to reopen the shuttered cruise-ship industry.

All of which is to say that DeSantis has shown this is how Republicans can win. Among Floridians, DeSantis’s approval rating now stands at 54 percent. (Another poll pegged DeSantis’s approval rating at 64 percent, one of the highest in the country.) Up for reelection next year, DeSantis outpolls Democratic challengers for his seat — including former Republican Gov. Charlie Crist, now a Democratic member of Congress — by comfortable margins.

DeSantis was not undone by the pandemic — he’s become one of the country’s leading Republicans. As for the Democrats who valued “science-first” shutdowns, Cuomo is now embroiled in scandal and Newsom is facing a recall election. Reliably popular among Hispanics and independent voters who are coveted by both parties, early polling suggests if Donald Trump doesn’t run again, DeSantis is now one of the frontrunners for the 2024 GOP nomination.

In April 2021 alone, DeSantis raked in $14 million in campaign contributions, including $5 million from a Chicago hedge fund manager, according to the Miami Herald. The governor is now sitting on a $31.6 million campaign war chest. Florida’s economy is booming, and venture capitalists sick of California are flocking to Miami.

DeSantis’s blend of right-wing, populist partisanship and coronavirus-defying stunts — in which he relied on “politics, not science” for his decision-making, as a recent study published by researchers at the University of Central Florida found — along with creating obstacles likely to hinder Democratic voters’ ability to participate in elections, appears to be the present and the future of the Republican Party.

Jalicia Lewis graduated from Florida State University last year, where she wrote her honors thesis on Florida Amendment 4, a voter initiative that was supposed to reenfranchise most of the 1.6 million people in Florida with felony convictions who lost their right to vote. Lewis’s research suggested that Amendment 4 would encourage more voter turnout, in particular more Black voter turnout — and maybe it would have, before subsequent court decisions created exceptions, such as withholding restoration of those rights until prohibitive court fees were paid. While Amendment 4 might have returned up to 280,000 people to voting rolls, DeSantis’s requirement that felons pay fines and fees before voting rights were restored has limited reenfranchisement to fewer than 32,000 people, a Tampa Bay Times/ProPublica investigation found. 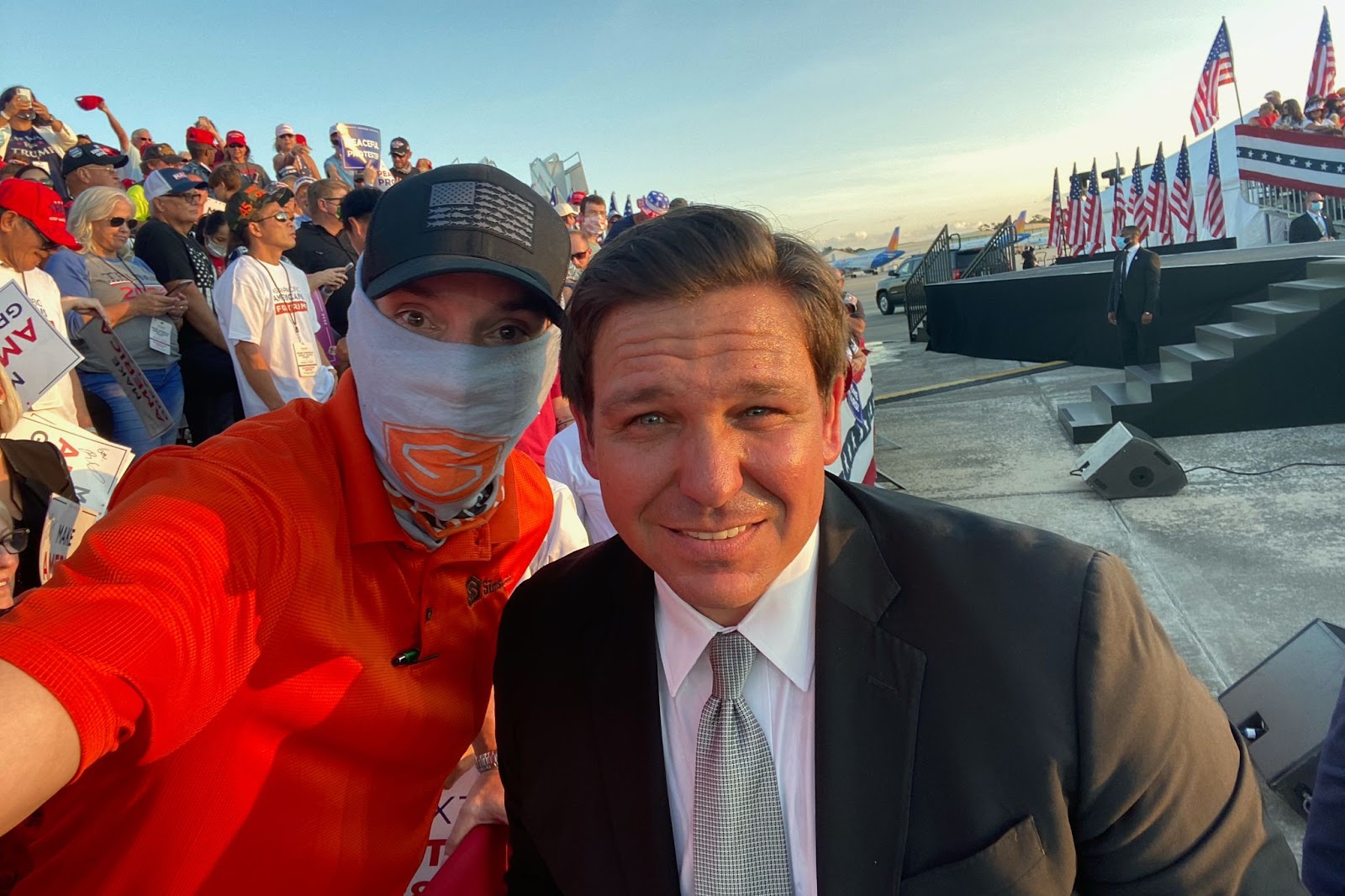 A Black woman, Lewis participated in last summer’s protests — which DeSantis has now made a potential criminal offense. Even chanting “Black Lives Matter” and “Defund the Police” in the streets could be prosecuted as a crime.

“He wants to control free speech by taking away our ability to protest his vile politics,” she wrote via email. “It’s scary to know that under HB1, I could have been arrested and charged with a felony last summer for doing what was right in the face of so much injustice.”

Add that to his dismissal of shutdowns, which appealed to small-business owners, reopening of bars and beaches, which satisfied Florida’s young voters, and his efforts to steer vaccination efforts toward senior citizens, and a pattern of cynical but effective pandering emerges.

“You combine those factors with his being a staunch Trumper leading a state that went red in 2020, he has found a winning formula,” Lewis told WhoWhatWhy, before offering a warning: “Unless the Democratic Party can reengage African Americans, the young people who largely benefited from being able to party sooner, and small business owners, the DeSantis strategy will continue to be successful for the GOP.”

The Democratic Party is acutely aware that DeSantis, who is only 42, is a threat in 2024 and beyond. So are Republicans, who will export the Florida model nationwide. “The heart and soul of the Republican Party is certainly in Florida right now,” Chris Hartline, a spokesperson for the National Republican Senatorial Committee told CNN. “Republicans in Florida are giving Republicans nationally a road map.”

By tweeting “#BacktheBlue,” demonizing “the far left” on Fox News, and holding town halls on Newsmax while shutting out the rest of the media, DeSantis is an ideal and eagerly effective conservative culture warrior. But unlike most of Tucker Carlson’s guests, DeSantis is realizing this vision. What’s the Republican Party “post Trump”? It’s in Florida: it’s not new, but “improved.” And it’s working.