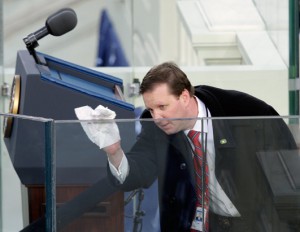 A Closer Look at the Secret Service Secret Service agents are one category of law enforcement whose agents typically get the glory treatment. Recent books by members of JFK’s secret service detail, almost devoid of revelations or candor, have nevertheless received lots of positive coverage. Meanwhile, legitimate questions about the service—how it works, what kinds of people it employs, how effective it is—are pushed aside.

Maybe that’s why the media reacted with such astonishment to learn that Secret Service agents preparing for Obama’s visit to Cartagena, Colombia, consorted with prostitutes. Eight agents have been forced out of their jobs, and a ninth is on his way out. Military personnel along on the trip are under investigation as well. The activity raised questions not only about the appropriateness of such conduct, but of whether this behavior threatened the President’s safety.

Now the government is saying that the Cartagena hijinks were an aberration. Homeland Security chief Janet Napolitano assured the Senate Judiciary Committee last week that the Secret Service’s Office of Professional Responsibility had received zero complaints of agent misconduct in the last two and a half years. That means total good behavior in roughly 900 foreign and 13,000 domestic trips.

But here’s the problem: it’s the Secret Service assuring us that the Secret Service is squeaky clean. The matter of self-policing came up last week when Napolitano faced the Senate committee. As ABC reports, Napolitano claimed that the Homeland Security Inspector General was supervising the investigation, but the IG’s own office said it was merely “monitoring” the Secret Service’s self-examination, and would review it when it was complete.

Since the events of April 12, a probe has grown, and investigators are very much just getting started. And not just about Colombia: the Associated Press reported on inquiries into possible Secret Service liaisons with strippers and prostitutes leading up to an Obama visit to El Salvador last year. And some agents are contending that cavorting and drinking heavily is actually quite common.

In fact, there are many other questions about the Secret Service and about presidential security that are not being properly addressed. Coming as we approach the 50th anniversary of John F. Kennedy’s violent death, these are not idle concerns.

Obama and Kennedy
As we have noted here previously, the agency has been involved in serious security lapses and misjudgment before. For example, in Obama’s first year in office, the agency failed to keep an unauthorized couple with a hankering for publicity from getting into the White House and close to the President—and there may be more to the story.

Then, in 2011, a classified booklet containing Obama’s schedule, down to the minute, along with details on his security contingent, was found lying in a Canberra, Australia, gutter during an Obama visit to that country.

Those incidents are reported to have upset Obama—and that’s certainly understandable. Meanwhile, his trip to Colombia, intended to showcase new trade initiatives with Latin America, was totally overshadowed by the scandal. Presidential trips are carefully calculated to generate positive publicity and create goodwill at home and abroad, so the prostitution sideshow just wiped that one out.

Such incidents are not just bad for image—they raise all kinds of issues in the safety area. For one thing, the agents themselves are compromised, even made susceptible to pressure and blackmail, particularly if they want to keep their jobs and if, as in numerous cases, the agents were married.

But this is not new. Go back almost half a century, and look at the most shocking dereliction of duty ever—the failures that made it easy for someone (or someones) to assassinate John F Kennedy. The failings are endless, from not insisting that the bubble top go on Kennedy’s car, to having too few Secret Service agents protecting the president, to authorizing a particularly dangerous route that slowed the car way down, to allowing it to go through a canyon of windows—and then not checking or securing the windows or installing spotters or sharpshooters. A grade school kid could have done a more serious job of protecting the president.

Or no one to watch the windows?
Mr. Lawson:

Oh, yes. The police along the area were to watch the crowds and their general area. The agents riding in the followup car as well as myself in the lead car were watching the crowds and the windows and the rooftops as we progressed.

What were the instructions that you asked be given to the police who were stationed on overpasses and railroad crossings?

They were requested to keep the people to the sides of the bridge or the overpass so that-or underpass– so that people viewing from a vantage point like that would not be directly over the President’s car so that they could either inadvertently knock something off or drop something on purpose or do some other kind of harm.

And yet we continue to let this agency off the hook. We forgot that even LBJ, a direct beneficiary of the agency’s sloppiness with his former boss, trusted the outfit so little himself that he inquired at one point whether he could have the FBI protect him instead.

It is foolish to ignore the worldviews and attitudes of people expected to protect presidents. Former Secret Service agent Abraham Bolden has described rampant racism and widespread contempt for Kennedy and his policies among Bolden’s fellow officers.

Now, here are a few salient details about the Secret Service today that go beyond trying to get a little “R&R”:  When Washington Post reporters visited the Virginia home of Texas native David R. Chaney, one of the Secret Service supervisors on the Colombia trip, they found a silver pickup truck parked in front. On the vehicle they spotted a bumper sticker with an outline of the state of Texas, and the word “secede.”

It is interesting to note that Chaney’s father served in the Secret Service when Kennedy was in office. As assistant agent in charge of personnel, he was friends with many of the agents who were in Dallas in November, 1963.

Speaking of Dallas, consider these excerpts from a Warren Commission affidavit of Texas Sen. Ralph Yarborough, who was riding in the motorcade:

After the shooting, one of the secret service men sitting down in the car in front of us pulled out an automatic rifle or weapon and looked backward. However, all of the secret service men seemed to me to respond very slowly, with no more than a puzzled look. In fact, until the automatic weapon was uncovered, I had been lulled into a sense of false hope for the President’s safety, by the lack of motion, excitement, or apparent visible knowledge by the secret service men, that anything so dreadful was happening. Knowing something of the training that combat infantrymen and Marines receive, I am amazed at the lack of instantaneous response by the Secret Service, when the rifle fire began. I make this statement in this paragraph reluctantly, not to add to the anguish of anyone, but it is my firm opinion, and I write it out in the hope that it might be of service in the better protection of our Presidents in the future.

In the early 60s, Secret Service protection was downright awful. Henry Bosworth, the late editor of the Quincy Sun newspaper in Massachusetts, used to recount how he climbed aboard a press bus with no credentials, was asked no questions nor frisked for weapons, and found himself inside Hyannisport having drinks with JFK himself.

And how is it now? Here’s an account of a WhoWhatWhy friend, from an Obama campaign stop in Grand Forks, North Dakota, in April, 2008.

The night before I went to the convention center/domed stadium about 10pm & was walking the convention center concourse when I encountered a private security guard.  We made small talk & soon he volunteered that his job the next day was to escort Obama from the ballroom through the kitchen into the main arena for the speech.

I said to him that sounds like the scenario from the RFK scene in 1968.  He didn’t know what I meant.  I clued him in.  The point is the SS was stupid enough to allow an amateur to be a part of security.

The next day I positioned myself by the kitchen exit, not that close but in a position to be the 1st person that Obama would greet if he were to go toward those seats.  I reminded an SS agent about the discussion with the security guard from the night before & he agreed that it shouldn’t have happened but he wasn’t in the area when Obama did walk out as I had been told he would.  The security guard actually walked over to me & thanked me for giving him a story to tell his grandkids.  I guess the glitches in security are more common than we imagine—but more likely if you have hookers on your mind.

Oh, by the way: during renewed government inquiries into JFK’s death in the 1990s, the Secret Service destroyed crucial assassination-related records.