Why I Hated — and Then Loved — Gorbachev - WhoWhatWhy
Reading Time: 5 minutes

Does anyone still remember Mikhail Gorbachev, the just-turned 90-year-old man more responsible than Ronald Reagan for the transition to perestroika and collapse of the Soviet Union? I do.

In the Orwellian year of 1984, I was a skinny, myopic Soviet nine-year-old wondering whether a US nuclear missile strike would kill me on impact, or if I would survive a post-WWIII world, rummaging for canned foods and planting toxic potatoes.

I was already surrounded by death. The “hearse race,” deaths and funerals of half a dozen top Soviet leaders between 1982 and 1985, was in full swing. The Soviet-Afghan war was happening right next to Soviet Uzbekistan, where I lived. My swimming instructor had a couple of bullet scars and would soon drink himself to death.

Calculations of my own coming death were precise — I lived slightly more than 20 kilometers away from Tashkent, the Uzbek capital, and a nuclear bomb usually annihilates everything within 20 kilometers, according to those propaganda flicks. So, I figured, I had a chance.

Yet, I firmly believed in the forthcoming Communist utopia, watched propaganda shows and “documentaries” describing A-bomb explosions and the nuclear winter, and was in charge of my class library of books on Soviet founder Vladimir Lenin. So when Mikhail Gorbachev, who became the Soviet leader around my 10th birthday, effectively reshaped everything about my world, I didn’t revere him for preventing a nuclear apocalypse. I hated him.

I hated him the way a teenager hates his parents after discovering a skeleton or two in the family closet. Gorby’s glasnost (transparency) reforms put those skeletons on full display, despite the protesting cries of die-hard Commies. But just how much do you like someone who makes you realize that everything around you was based on lies? That you didn’t live in the world’s most fair society? That the USSR was built on millions of corpses forever frozen into the permafrost of Siberian gulags? My grandfather and great-grandfather were among them, and at the time, I didn’t even know the dates of their arrest and execution.

When filtered by translation and cut into soundbites, Gorby’s speeches became a sensation in the West. Unlike the senile, mumbling would-be participants of the hearse race, he genuinely tried to please his Western counterparts. He smiled. He was ready to change, to end the Afghan war, to withdraw troops from Eastern Europe, to reduce the number of nuclear missiles.

I didn’t want to hear the 64-year-old’s Joycean speeches in his rumbling southern Russian accent, or gaze at the birthmark that Robin Williams once said “looked like a map of Albania.” My body was transforming. I wanted to discover the opposite sex, cigarettes, alcohol, trendy clothes, and rock music.

Under Gorby, the entire Soviet Union, a sleepy and frightened nation of almost 300 million stretching from the Baltic to the Pacific, seemed to be transforming in the same way. Out of the blue emerged skin magazines, MTV, late night talk shows, new booze, and drugs.

But much more importantly, there was a squall of new information. Declassified documents, once-banned Russian and Western novels — including George Orwell’s 1984 — movies, newspaper articles, and talk shows defamed our heroic, Communist-era past. 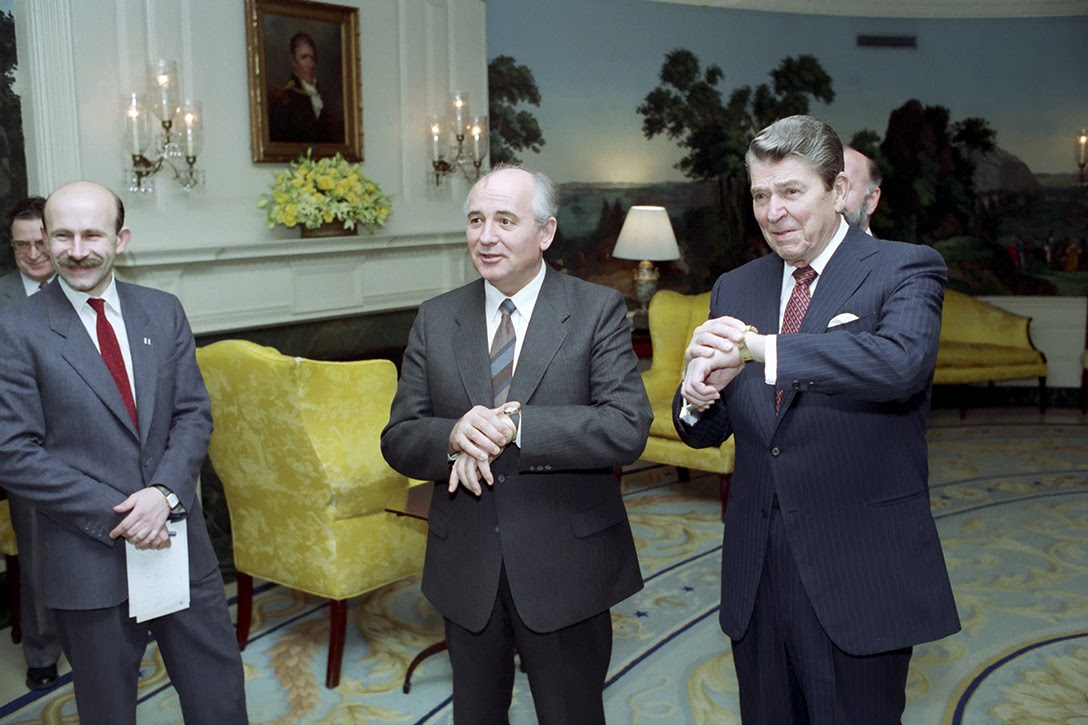 The Communist dogma immediately gave way to religions, superstitions, and what we know now as fake news. My cancer-stricken grandmother consulted a psychic who tried to convince angels to take out her tumor. Tabloids wrote about aliens who built the Egyptian pyramids. Preachers scared us with an apocalypse — a new, non-nuclear one — promising salvation in return for donations.

The spring of perestroika didn’t give us blossoming magnolias or sunrises by the sea. It simply thawed the permafrost, and instead of snow and ice we saw dog feces, garbage, and ankle-deep dirt. Now, it was up to us to plow the dirt, sow, and reap whatever we wanted.

Gorby’s reforms made capitalism possible — an ugly, mutant version of capitalism that relied on corruption. Very few got rich quickly, but inflation was galloping, and food disappeared from state-run shops and was exorbitantly expensive in new private stores.

My parents’ savings turned into nothing, and their salaries weren’t enough to buy food, let alone basic clothes. I spent weekends selling meat pies my mom cooked in her kitchen, swimsuits, shoes, and second-hand jeans — and often had to run away from cops who wanted their fingers in those pies.

Who was to blame? Gorby.

By the time I discovered the taste of Russian vodka and Afghan hashish, and went to third base with my girlfriend, the USSR collapsed. Even though nine out of 15 Soviet republics voted to stay in the USSR, Boris Yeltsin declared Russia’s independence from its imperial self, and in late 1991, Gorby signed a decree abolishing his own job.

Instead of the huge motherland of Communism, we had 15 “newly-independent states” in the middle of a painful, chaotic economic and ideological transition. Most ex-Soviet denizens blamed Gorby and only Gorby for the transition that made lives and careers useless, for the joblessness, organized crime, loss of contact with relatives in other ex-Soviet republics, and the emergence of kleptocratic, corrupt governments.

After the USSR’s collapse, I put Gorby out of my mind for a time, though his influence lingered. I studied English so I could make some quick, reliable money as a translator. Because of his reforms I could travel abroad, buy a bigger TV and a louder sound system, have a house built for my parents, and fly to Moscow to hear my favorite bands. 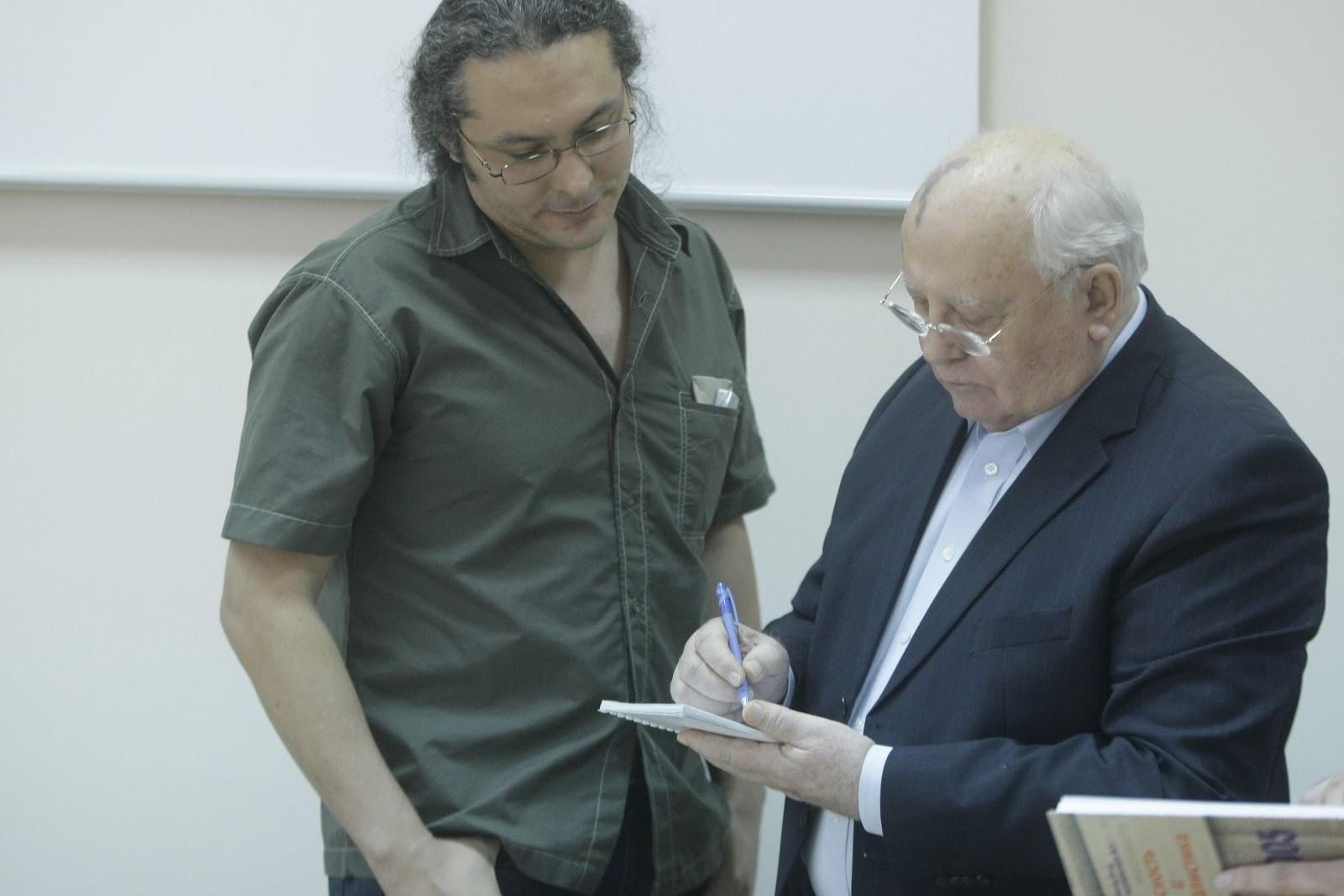 Mansur Mirovalev, the author of this article (left), getting an autograph from former Soviet General Secretary Mikhail Gorbachev (right) at the Gorbachev Foundation in northern Moscow on September 29, 2010. Photo credit: Courtesy of Mansur Mirovalev

In 2003, I won a scholarship to study journalism in the US and spent two years in California. I got back to Uzbekistan to start a job for the Associated Press but had to pack up and leave for Moscow because Islam Karimov, Uzbekistan’s president at the time, started political purges that rivaled those of medieval autocracies — or the early USSR.

As a journalist I had to revisit my relationship to Gorbachev — and this time, it was less one-sided. Between 2007 and 2013, I interviewed Gorby several times. He was living in Russia, as he is to this day, and we were both older, having taken part in the end of one era and the beginning of another. He was still talkative, still debating how the USSR could have developed economically and politically had it not collapsed, still surrounded by reformists and intellectuals who helped him briefly turn the Empire of Evil into a democratic state — and make Russia one, if just for one decade.

I realized that this man was the only true nemesis to Soviet dictator Joseph Stalin, and that his very attempt to reform the USSR was doomed from the start. But Gorbachev’s failures were more beneficial for the almost 300 million Soviet citizens than any great achievement of his predecessors, because they forced a complete break from one of history’s darkest eras.

Today, Gorbachev leads a quieter life, and at times I miss his southern drawl. The novel 1984 concludes by saying the struggle is complete: the protagonist gives in to the government and loses his sense of self. In this world, maybe not. In 2014, Gorby warned that Russia and the US were heading toward a new Cold War after Moscow annexed Crimea and backed separatists in the war in southeastern Ukraine.

Still, I have won a victory over myself. I love Mikhail Sergeevich Gorbachev.