UPDATED, March 1, 2020, 6:24 p.m.: Georgia Republicans are divided between those, like the governor and the secretary of state, who accept the November election results and those who still insist the only way Democrats beat Donald Trump was through voter fraud. Yet they are united in support of a litany of proposals that would restrict voting rights.

On Monday, the Georgia House of Representatives passed a sweeping election bill, despite an outpouring of criticism from Democrats, voting rights groups, and voters.

House Bill 531 — or, as one Cobb County voter put it, an “everything-but-the-kitchen-sink-bill” — introduced by Chairman Barry Fleming (R) earlier this month, would overhaul many of the state’s election laws, including limiting early voting, implementing photo ID requirements for absentee voting, and reducing access to ballot drop boxes.

In total, 16 election bills introduced by House and Senate Republicans are moving through the Republican-controlled Legislature. They range from banning no-excuse absentee voting to banning nonprofit organizations from mailing absentee ballot applications to voters, blocking voters from being automatically registered to vote when they get their driver’s licenses, and prohibiting new Georgia residents from voting in runoffs. H.B. 531, which is now headed to the state Senate, is the latest and most encompassing effort by Georgia Republicans to reshape voting laws.

“The motivations behind this bill are suspect because it was introduced immediately after Georgia voters generally, but especially voters of color, dramatically increased their use of absentee voting in the 2020 general election and January 2021 runoff elections,” Pichaya Poy Winichakul, a voting rights attorney representing the NAACP’s legal and education funds and the SPLC’s action fund, said in a public hearing held last Friday in Atlanta.

“We are deeply concerned that the Legislature is considering a bill poised to create unnecessary barriers and burdens on voters that disproportionately impact racial minorities, low income, elderly, rural, disabled, and student voters,” Winichakul said.

The main problem, most opponents argue, is that the state’s GOP is desperately looking for a solution to a problem that doesn’t exist — voter fraud.

The Georgia general election and the subsequent January runoffs were highly scrutinized after Joe Biden won the state by a slim margin, prompting former President Donald Trump’s desperate attempts to overturn the election results by promoting a slew of baseless accusations of voter fraud.

For months, the state’s top three election officials, all of whom are Republican, insisted that the election was fair and pushed back against vicious Twitter attacks, including death threats, from Trump and his allies.

Even though numerous recounts, audits, and investigations failed to prove any widespread voter fraud, Republican state lawmakers introduced a wave of aggressive voting legislation aimed at preventing voter fraud and rebuilding confidence in the state’s elections.

But critics say a causal connection between the record-breaking turnout in the state’s heated elections and the new legislation is hard to miss and constitutes an attempt by Republicans to restrict voting access for minority communities, especially given Georgia’s history of voter suppression.

On Tuesday, state Senate Republicans passed a package of four election-related rule changes supported by Lt. Gov. Geoff Duncan (R), which was sent to the House of Representatives for consideration.

“The GA legislature is passing election bills so fast that they are begging for unintended consequences,” Marilyn Marks, executive director of the Coalition for Good Governance, said.

Voting rights groups and concerned citizens expressed their opposition to the sweeping H.B. 531 during Friday and Monday public hearings, which were scheduled shortly after House Republicans introduced the bill. Many of its provisions reflect that of various Senate and House bills currently moving along the legislative process.

Wednesday’s committee vote along party lines could lead to a potential vote in the full House of Representatives within days, according to the Atlanta Journal-Constitution.

A section of the bill states that secure ballot drop boxes would only be allowed in early voting locations and would be accessible only during the days and time those locations are open. “It would make ballot boxes useless.” — Christopher Bruce, ACLU of Georgia political director.

In the 2020 general election, 10 percent of Georgians voted early on the weekend, according to a data analysis by the Center for New Data, a nonprofit group that collects data on voting and COVID-19. In 107 of the state’s 159 counties, African Americans voted on weekends at higher rates than voters identifying as white in the same county, the analysis showed, while white voters were the least likely to cast their ballots on weekends.

A previous version of the bill completely eliminated voting on Sundays, a measure that voting rights advocates argued directly targeted the Black community, which is known for organizing “Souls to the Polls” events and get-out-the-vote campaigns. “Committee Chairman Barry Fleming said legislators listened to voters’ concerns during three days of public testimony and accommodated their requests for a Sunday voting day,” the Atlanta Journal-Constitution reported.

Another contested measure in both H.B. 531 and Senate Bill 67 would require voters to provide a driver’s license number, a state ID number, or a copy of a photo ID when requesting an absentee ballot. This would disenfranchise the three percent of Georgians who do not have the required identification, according to Fair Fight, one of the voting rights organizations launched by Stacey Abrams.

House Republicans are also hoping to pass a different bill that would increase the amount of money it would cost to replace a driver’s license, which “in a state [with a] minimum wage of $5.25, would disproportionately impact Black and poor Georgians throughout this process,” the president of the Georgia NAACP, Rev. James Woodall, said on Monday. This could even be considered a form of a poll tax since higher percentages of Black Georgians live in poverty, he said. 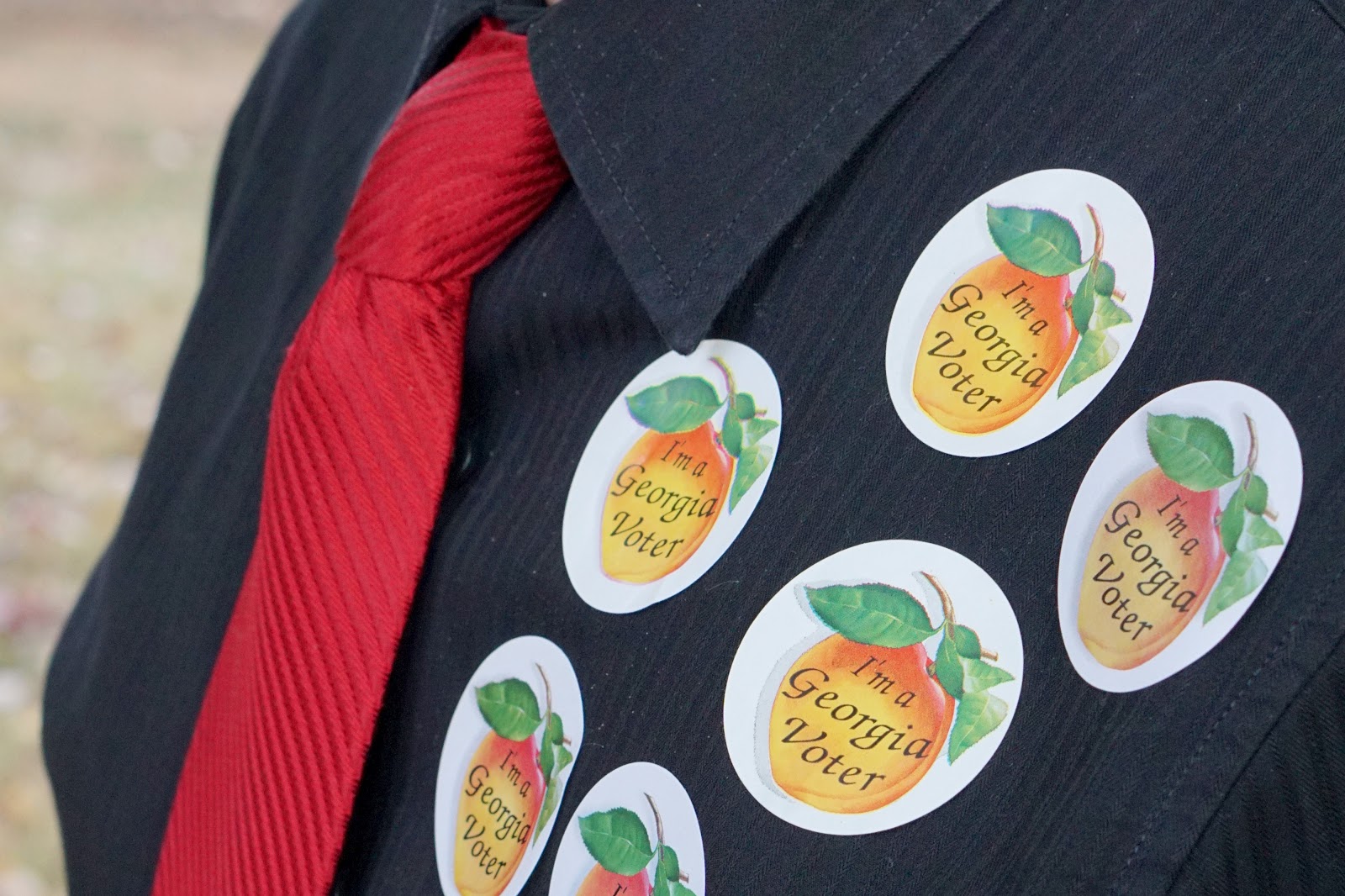 Georgia currently has no deadline for applying for an absentee ballot, but under H.B. 531, a voter would not be able to request one fewer than 11 days before an election, unless he or she is hospitalized. As a result, voters who experience other justifiable unforeseen circumstances would not be covered, said Marks.

Just four days before the November 3 election, Georgia’s governor, Brian Kemp, requested a last-minute absentee ballot after entering an unexpected quarantine because he had been in contact with someone who tested positive for the coronavirus. But under H.B. 531, he would not have been able to do so.

“Voters are the most informed and the most engaged in the election process within about 7 days of the election,” said Amber McReynolds, CEO of the National Vote at Home Institute and a former election official. “So we often see that more and more people start voting early or utilizing those activities prior to election day the closer that you get to election day. So it’s important that you have sufficient services.”

Anyone who observes or attempts to observe how an elector voted could be charged with a felony, according to the new bill. “This is an egregious and intimidating shifting of blame and responsibility from the state and county election board to innocent people in the polling place,” according to Marks, who says the voting machines’ touch screens are “so big, so upright, and so brightly lit that what it does is advertise across the entire room.” The touch screens were part of a controversial new electronic voting system — introduced by Fleming in 2019. In addition to its price tag of more than $100 million, the electronic system was criticized as the reason for widespread issues with voting machines during the 2020 primaries, causing long lines and anger across the state.

Another section of the bill states that secure ballot drop boxes would only be allowed in early voting locations and would be accessible only during the days and time those locations are open. “It would make ballot boxes useless,” said Christopher Bruce, political director of the Georgia ACLU.

Other provisions include limiting mobile voting buses to emergencies; prohibiting county election officials from accepting outside funding, which could drive up the cost of local elections; and banning distribution of food and drinks to voters waiting in line.

Groups dedicated to increasing voter turnout are likely to double their efforts in upcoming elections to counter the restrictive legislation.

“I have hope that the electorate is excited, that they’ve experienced some success and even if hardships are thrown out there, even if the Republicans do make it a little harder, that they will continue to show up and be enthusiastic,” state Sen. Sally Harrell (D) told WhoWhatWhy.

One response to “‘Reckless and Irresponsible’ Voting Measure Passes in Georgia”