The unanswered question today is not the final vote count in swing states, nor when the noisy street protests will subside, nor when judges will determine the outcomes of cartloads of lawsuits.

The big question — the one that will define American politics for years to come — is: When will Donald Trump concede defeat?

When will he hold a news conference in which he does what every losing candidate has done before him: thank his supporters for fighting the good fight, his family for their support, his contributors, his loyal campaign staff… and, finally, congratulate Joe Biden for having won the race for president?

In our heart of hearts, we know that will never happen.

This is not mere speculation. The president himself outlined the trajectory he intends to follow in remarks he made from the White House the afternoon after Election Day. To paraphrase, he claimed he was the true winner. The election was stolen by fraud perpetrated by partisan election officials, aided and abetted by pollsters and the media.

To put it another way, Trump sees himself as the victim of a vast conspiracy to deny him a second term.

Continued disruption is not the scenario being sketched out by the media and the political establishment this week. Their narrative will be that Trump was rejected by an electorate weary of his erratic behavior and fearful of what the future would hold if he were returned to the White House. Biden will preach the need for unity, as will some venerable Republican leaders, few of whom still serve in elected positions.

They will say that the process worked. The people have spoken. The battle is over. Even if we are not happy with the result, it is now time for the country to unite behind our new president and move forward into a better — certainly a more peaceful — future. 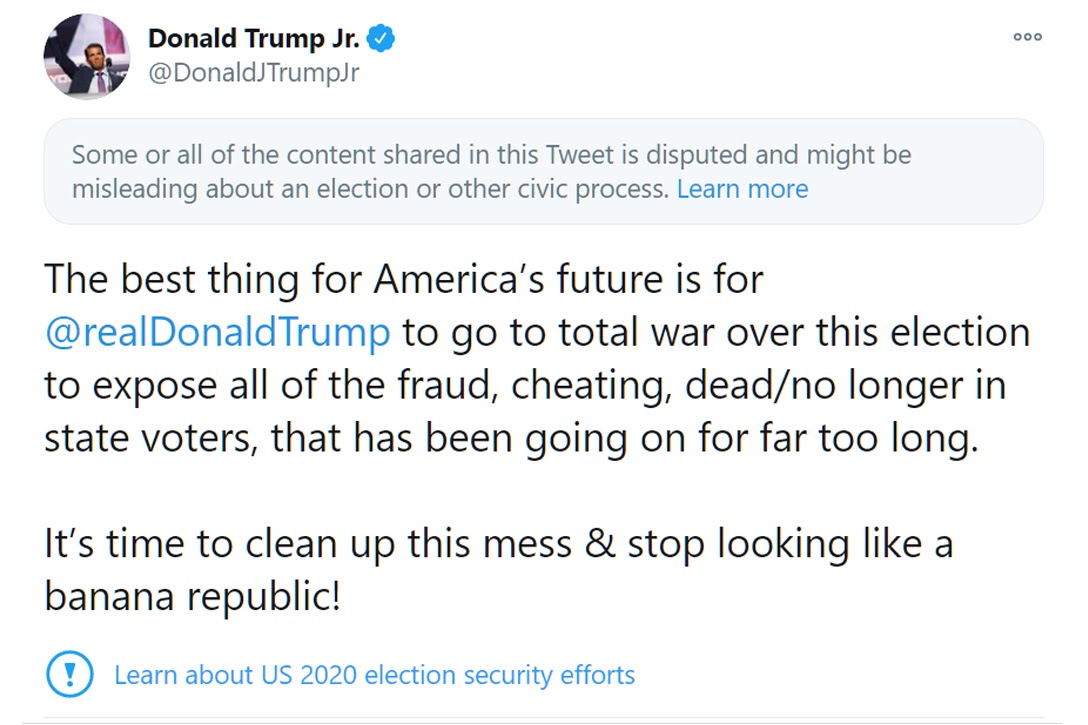 For a totally different point of view, consider this tweet today (Friday) from Donald Trump Jr.: “The best thing for America’s future is for Donald Trump to go to total war over this election to expose all of the fraud, cheating, dead/no longer in state voters, that has been going on for far too long.”

The president’s son was promptly criticized for making intemperate remarks, and his Tweet was quickly flagged as “misleading” by Twitter, another attempt by the media to uphold norms that used to be shared, but now lie in shreds.

No one doubts the fervor of Trump supporters. In fact, the Republican establishment owes him thanks for supercharging Republican turnout on Election Day. The down ballot effect was to save the hides of vulnerable Republicans, thwarting Democratic hopes of building on a majority in the House and winning it in the Senate. The blue wave has been called off.

As payment, Trump (soon to be the ex-president) is likely to demand continued loyalty from these GOP minions. They will remain fearful of criticizing him and give credence even to his strangest ideas.

That is because he will remain their leader, partly because there is no one of sufficient stature to replace him (Marco Rubio? Ted Cruz? Someone? Anyone?), but mostly because he retains his base with the clear majority of Republican voters who believe in him almost as much as he believes in himself.

These supporters reside in two camps. Let’s call one, for want of a better word, his “normal” supporters — social, religious, and economic conservatives, whose dislike of the polyglot coalition known as the Democratic Party is palpable.

What Trump says may periodically offend them, but it is obvious most have given him a lifetime pass because of his stands on immigration and taxes, and his opposition to such groups as Black Lives Matter and the LGBTQ movement, plus a coterie of others they see as being on the extreme left — anti-meat, anti-fossil fuels, anti-big business, etc. In short, anti-American.

There is a second group of Trump believers that could be called, again for want of a better word, “fringe” supporters, untethered from trivial rationality. This group lives in a rich dreamworld of conspiracy theories, inhabited by either devils or angels, destroyers or defenders, pederasts or God-fearing, one-woman-for-one-man heterosexuals. (This group can be divided again into two groups: those who openly carry firearms and those who do not.)

This group hates facts. You say there was no voter fraud, that the election was clean and the results valid? Ha! That is just more proof of the conspiracy.

By disposition, Trump despises losing, so it would be excruciating for him to concede to Biden. Be a good sport. Attend the inauguration. Go on Meet the Press to wish the new administration well.

If he did that, he would be considered a traitor by his supporters, especially the fringers. He would no longer have access to the White House megaphone to reach his people. But, he would have carte blanche to the media — mainstream and off-stream. His lure is irresistible to people whose job it is to fill space. Imagine him on The View or Ellen or as a judge on America’s Got Talent, his hand poised over the buzzer.

No, he will not willingly admit defeat, nor will he become a benign, avuncular ex-president, who spends his time playing (more) golf.

As ex-president, Trump will have bills to pay, debtors to satisfy, prosecutors to fend off. He also is patriarch of a clan, one that has tasted the sweetness of power and surely wants continued access to that honey.

So, he will stick around, chewing the scenery and tromping around the stage of American politics until the day comes when he can turn the crown over to President Donald Trump Jr. — and exact his revenge.