“VOTE EARLY VOTE HERE” read the marquee at the almost century-old Kings Theatre in  Flatbush, Brooklyn, as my husband and I approached on Saturday, October 24, the first of nine days of early voting in New York state. There was a small cluster of people standing under the marquee, but it wasn’t until we got closer that we saw the line. Couples and singles, mothers with kids, seniors leaning on canes or walkers — all waiting to cast their vote in this contentious, horrendous, existential 2020 election.

When we arrived at 9:20 a.m., there were 255 people in front of us, all waiting for the polls to open at 10 a.m. We went down Flatbush Avenue, turned down Tilden, and onto Bedford Avenue, near the Sears that is still hanging on by a hair.

Everyone wore a mask. Blue surgical ones, flowered ones, paisley ones, N95 respirator ones, a Rolling Stones mask, a “VOTE” mask, and more. People in Brooklyn — in line or doing their shopping on Flatbush — don’t fool around when it comes to masks. As we say in Brooklyn, you must be kidding.

By 11 a.m., the line behind us had twisted and curved and snaked around several more streets, and there were 365 more people behind us. I then stopped counting. People brought their own seats of choice — soccer chairs, lawn chairs, stools, etc. A couple had stopped by a 99 Cents store and bought two orange-cushioned children’s chairs and squeezed into them, sitting at kindergarten level. No one was complaining, even in this borough that is home of the aggrieved reproach.

Perhaps after Trump’s murderous conscious neglect and disdain for science and health, which has led to 225,000 and counting people dying from COVID-19, his fomenting of racism and hate, his sidling up to authoritarian dictators and attacks on allies and the UN, his separation of immigrant children from their parents and ending DACA, his climate change denial, his rolling back of regulations, his vow to appoint judges to overturn Roe v. Wade, his tweetstorm attacks on critics and the press, and his endless lies, people knew what they had to do.

The first person in line, an older woman, got to the Kings at 4 a.m. “I wanted to get in,” she said. “They told us to get here early,” she said. And she, like many others, quoted Michelle Obama without referencing her. “I brought my breakfast and lunch.” 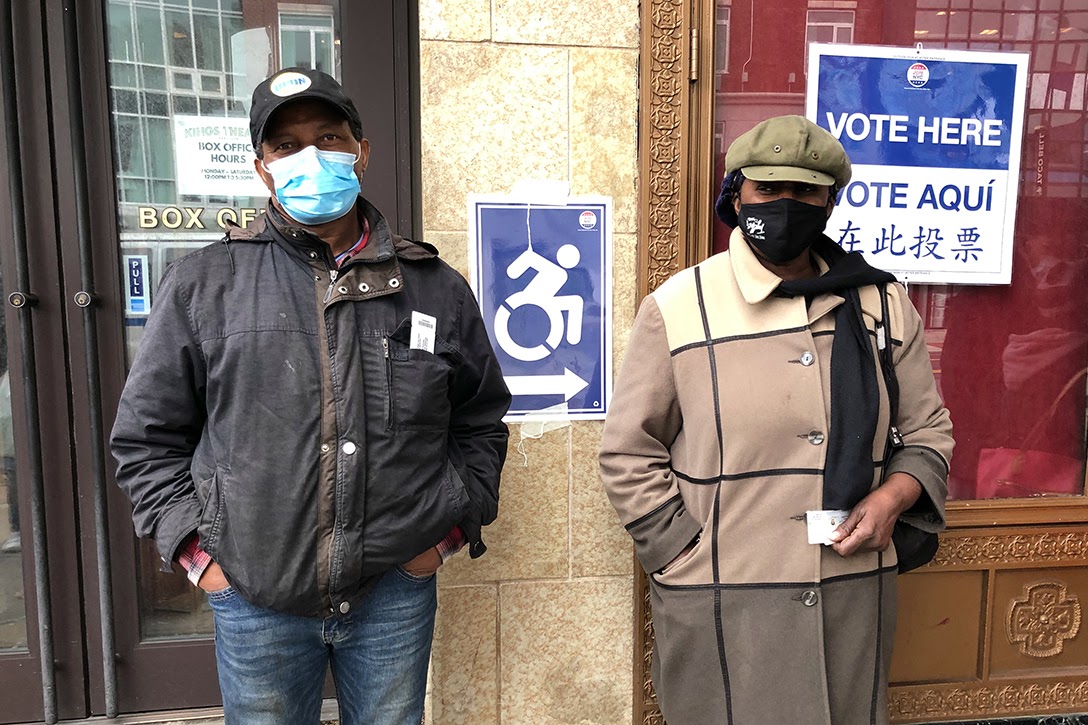 Right behind her, Ores Jean and his wife, Marie, also got there at 4 a.m., getting out of bed at 2 a.m. to make sure. They’re from Flatbush, the expansive neighborhood that spreads out in many directions from the thoroughfare of the same name that crosses Brooklyn diagonally. Flatbush was established by Dutch settlers in 1651 and now provides a home to the most American conglomeration of peoples — 49 percent African American, 20 percent white,19 percent Latinx, and 9 percent Asian, according to the 2010 census — the America that Trump doesn’t want to see.

“The only thing we have is the vote,” said Ores Jean, who came here in 1980 from Haiti. “We have to do it. Everything has changed. We have to come early.”

His wife agreed. “I always vote,” she said. “But now it is different. Everything has changed. Even the weather.”

Sidney Wormsby was there with his daughter Larissa, who had recently graduated from SUNY, Oneonta. They got there a little after 7 a.m.

“It made me feel a little bit better being on line,” said Larissa, who was wearing a yellow mask with palm trees on it. 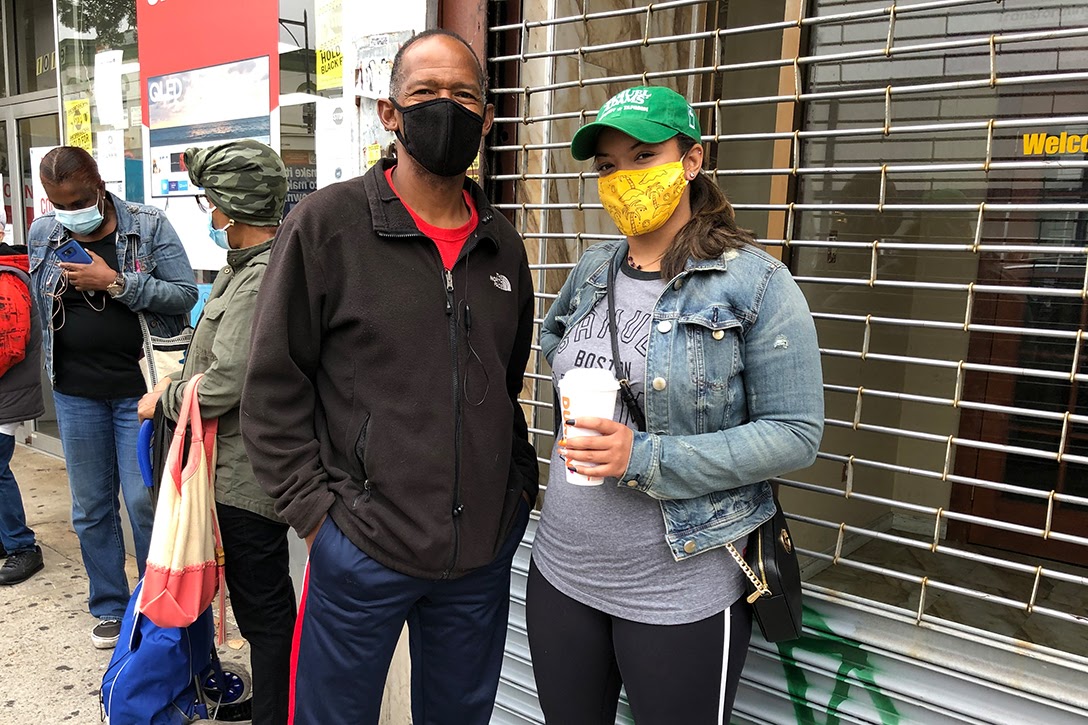 Her father said, “I wanted to vote in person because it will be harder to tamper with, harder to manipulate.”

Why is he voting? “The corruption, the policies, the lies, the unmooring — not just of the president, but the whole administration,” he said. “Democracy as we know it will not exist if he wins again.”

Darlene Waddell and her husband Jeffrey Chapman, both retired, came up 650 miles from South Carolina, where they have a house, to vote in Brooklyn, their home.

“The world can’t handle what we’ve been going through for the last four years,” said Chapman, who used to work for the MTA, New York’s transit system.

“Look how he handled the coronavirus — knowing what he did in January. This is the worst thing that has happened in my lifetime,” he said. 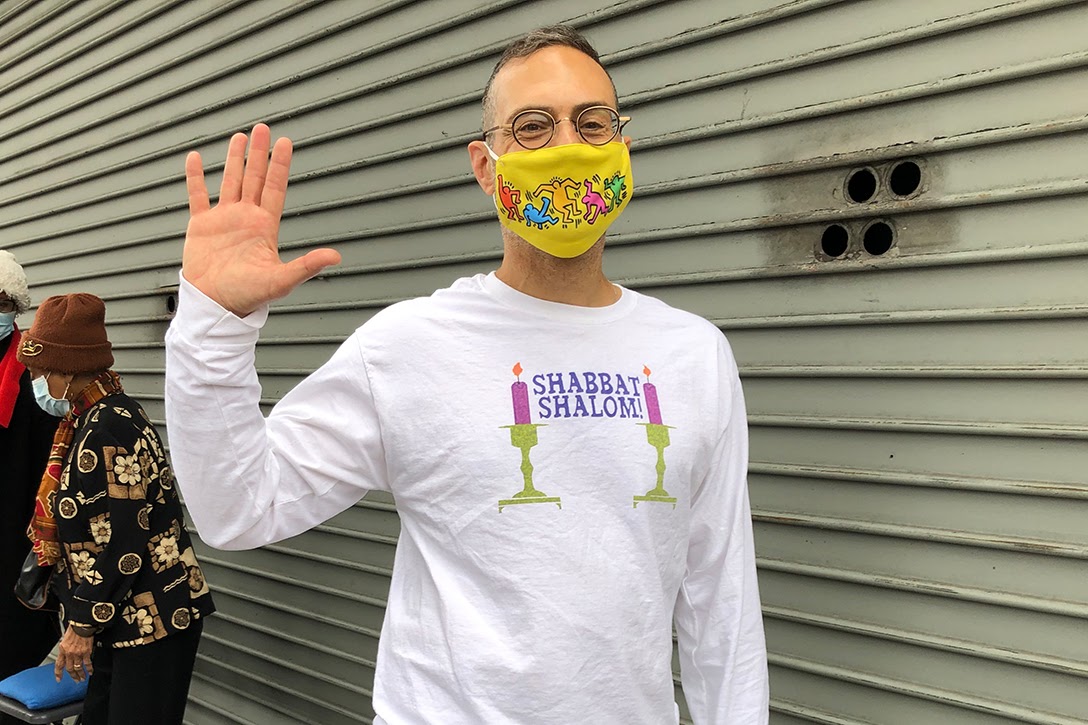 Scott Piro, who is a communications director and was about to go out of town, said, “Early is better than later. The president is trying to discount mail-in votes. I want my vote to be tabulated on election night,” he said. “He might try to claim the election on election night.”

By 11:30 a.m., two hours or more after we had gotten there, we were only a block and a half from where we first joined the line. Strangely, perhaps, for New York City, no one was dissing the Board of Elections, which has a history of incompetence and cronyism. The BOE had massively messed up the primary election in the spring when they were unprepared for the large number of absentee ballots, and counting in some races took over six weeks. And then in this election, a vendor hired in a no-bid contract sent out 100,000 absentee ballots for the general election in Brooklyn and Queens addressed to the wrong people. The vendor was then ordered to send out new absentee ballots to replace them.

Yet no one was grousing. There wasn’t a sense of impatience in the air — something that you can smell and certainly hear. It was more like: “We gotta do this.”

Several times, an election worker came around to tell us, “It’s moving, it’s moving slowly. Hang in there. People in Georgia waited six hours, and seven hours in California,” and explained if anyone had a mail-in ballot, they could go on through and drop it off. Very few people did.

Angela and John Williams were in line with their three-month-old daughter, Luci, swaddled onto Angela’s chest, a knitted pumpkin-like hat on her head. Both worked as bartenders and were laid off when their bars were closed. They are both on unemployment now, enjoying their new daughter, but also trying to figure out what their next steps are job-wise. 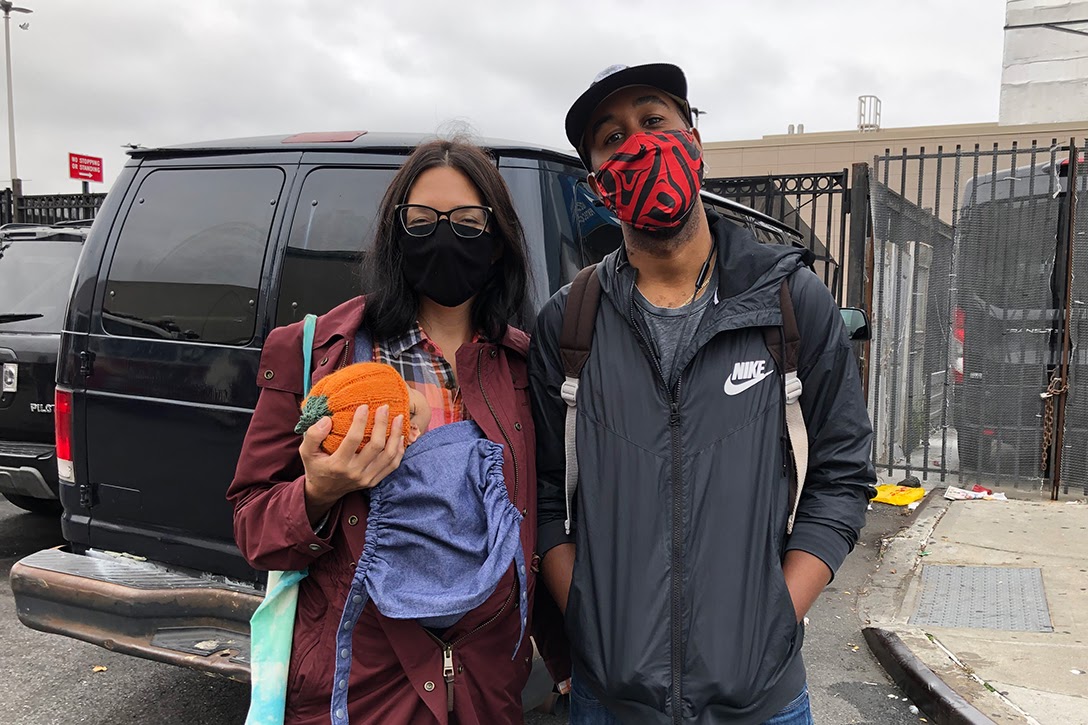 Chantel C., a special education teacher, was with her five-year-old daughter, Naomi. “We are at a critical point in our nation that requires a change — we have to do it,” she said. “That’s why I brought my daughter here — so she can see me voting.”

Anyone who has followed the news even slightly knows about Trump’s crony Louis DeJoy, who cut back shifts and overtime for postal employees and ordered sorting machines to be yanked out of post offices and destroyed. And we have all had to listen to Trump and the relentless and baseless Republican rants about voter fraud through mail-in voting. Is it any wonder that at early voting spots all over the city people quietly got in line and stayed there?

By 1:15 or so, our part of the line had moved slowly onto Flatbush, and poll workers were reminding us to spread out and social distance. We finally got a glimpse of the Kings Theatre marquee again.

A man in a Nets cap and his little, curly-haired daughter pulling a red beach wagon offered small bottles of water, masks, hand sanitizer, and Reese’s peanut butter cups to those of us in line.

Strangely enough, once we got inside, it went smoothly. After we handed in a “fast pass tag” with a barcode that we got in the mail, they looked us up on an iPad. Yes, it’s me, yes, that’s my address, and I signed with a stylus. Then it was on to the ballots we’ve been using for the last few years — bubbling our choices and then sticking the ballot into a scanning machine. It’s not as satisfying as the metal hammers that clicked when you pushed them down in the old-school voting machines that we used to use, and the big lever you moved to one side, which whooshed when it was all done. But it got the job done.

We pasted the “I Voted Early” stickers on our jackets and walked home. On the way, we passed a postal worker emptying a mailbox who asked, “Did you vote today?” We said we did, after we waited in line for 4 1/2 hours.