And then there were 14. That is the number of states that have refused to adopt an expanded Medicaid option available under the Affordable Care Act (ACA). Just five years ago, 21 states had declined to expand Medicaid; by the end of this year, the number of holdouts could drop to just 12, with potential for more shrinkage in the near future.

Two main factors account for the trend: the COVID-19 pandemic, and the ballot initiative process available to voters in many states.

The stakes are high. A 2017 study by the Urban Institute projected that if all the holdout states were to expand Medicaid, an additional 4.1 to 5 million people could gain healthcare coverage. Among other benefits, this could prevent tens of thousands of unnecessary deaths.

Another study estimates that if the remaining states were to fully expand Medicaid, it would prevent over 1,500 household medical bankruptcies per year, enable over 5,000 additional early cancer detections per year, and reduce uninsured opioid-related hospitalizations by over 17,500 per year.

Traditional Medicaid covers the lowest-income segment of certain groups of people, mostly younger than 65, such as children, pregnant women, and certain people with disabilities. By extending eligibility to individuals and families who are slightly better off (up to 138 percent of the federal poverty level), the expanded program provides health coverage for people who weren’t covered by traditional Medicaid.

After the US Supreme Court upheld the constitutionality of Obamacare in 2012, individual states — who run Medicaid, although the federal government pays 90 percent of the cost — could decide whether to expand their programs. Initially, 30 states and the District of Columbia decided to move ahead.

However, a solid block of red states with Republican governors or GOP-controlled legislatures declined to expand coverage. Among the reasons: In the eight years that President Obama held office, Democratic control of chambers in both legislatures dropped from 27 states to only 13 — a loss of 816 legislative seats. During the same period, Democrats also lost 13 governorships.

With the collapse of Democrats at the state level, prospects of more states accepting expanded Medicaid funding appeared slight, especially since most holdouts were in states controlled by conservative Republicans.

“We have over 200,000 hardworking Oklahomans that go to work every day, sometimes two and three jobs, and they are not afforded health care coverage.”

The Ace in the Hole

Despite efforts by grassroots activists, prospects for change looked bleak.

But expansion proponents had an ace in the hole: In many states, citizens have the ability to gather signatures, bypass legislatures, and put questions directly to voters. In fact, voters in about half of the 50 states — many in the Plains and Rockies — have the right to vote on initiatives or referendums. 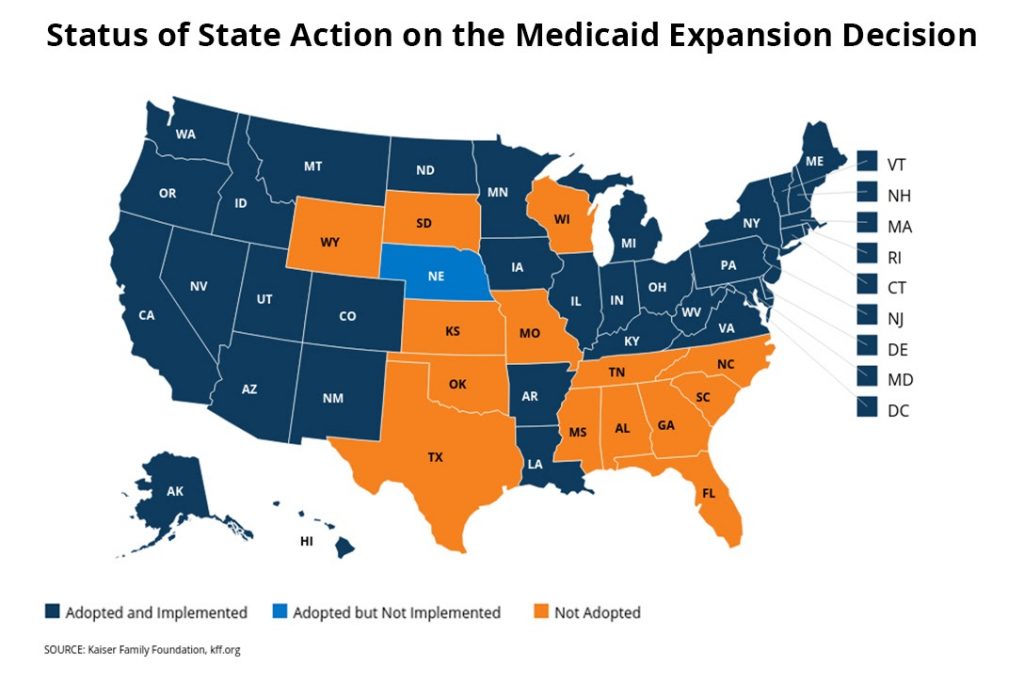 Keeping Up the Momentum

Hoping to build on that success in 2020, expansion supporters have placed initiatives on the ballot in two more red states. Oklahoma will vote on the issue June 30. Missouri voters will make their decision August 4.

The initiatives in both states would expand Medicaid eligibility to residents ages 19 to 64 whose incomes are 133 percent or less of the federal poverty level. (Actual eligibility is somewhat broader because of the methods used to calculate gross income.)

“We have over 200,000 hardworking Oklahomans that go to work every day, sometimes two and three jobs, and they are not afforded healthcare coverage,” Patti Davis, president of the Oklahoma Hospital Association, told WhoWhatWhy.

And, Davis pointed out, this lack of coverage leads to a lack of preventive care, which ultimately can lead to expensive emergency room visits to treat dire health conditions.

An analysis by the Center on Budget and Policy Priorities, a nonpartisan research and policy institute that pursues federal and state policies to reduce poverty and inequality, concludes that if the measure passes, some additional 204,000 Oklahoma residents would be eligible. Most of them currently lack any health care coverage.

Advocates argue that the influx of federal funds will lead to an increase of business activity, creating jobs in the process. They also note that low-income people will be able to spend more money in the retail economy, creating more jobs, because they will spend less on health care.

“The hospitals have a large deficit, especially in rural Oklahoma … This [expanded Medicaid] should provide $1.36 billion in new taxes over the first year and $8.5 billion over the next five. All of that really creates approximately 27,000 jobs and generates some new economic activity,” Richard Schafer, board of trustees president for the Oklahoma Osteopathic Association, told WhoWhatWhy.

The ballot initiatives in Oklahoma and other states have plenty of critics. Conservatives argue that increased Medicaid expenses would divert resources from existing social programs, and say other states that have expanded Medicaid have consistently busted their budgets. They also say there is no guarantee that the federal government will continue to pay 90 percent of the costs of broader Medicaid coverage, potentially leaving states holding the bag.

But expansion supporters appear to have the upper hand politically. Polls show them far ahead in both states.

Advocates have spent money on rallies and advertising, with formal opposition emerging only recently. The pro-expansion dynamics in Oklahoma appear to be supporting the Missouri initiative, too.

Supporters have also vigorously disputed arguments put forth by critics. They cite statistics showing net budget savings and increased tax revenues in a wide range of states that have expanded Medicaid.

If both measures pass, that would still leave 14 states without expanded Medicaid. But many analysts expect a slingshot effect, with success in Oklahoma and Missouri building momentum in the remaining holdout states.

Indeed, the 2018 success of Medicaid expansion initiatives in Utah, Idaho, and Nebraska may already be influencing Missouri voters.

“People in Missouri know that other states right next door have passed it,” said Connie Farrow, a spokesperson for Healthcare for Missouri, which led the signature gathering for her state’s initiative.

And, a spokesperson for the Center of Budget and Policy Priorities noted that evidence showing large gains in health coverage, related economic stimulus effects, and increased effectiveness in keeping rural hospitals open has made Medicaid expansion an easier sell to skeptical voters.

Kansas narrowly missed becoming the 37th state this year to expand Medicaid. And even though North Carolina failed to pass expansion, the proposal attracted some Republican support.

“Do states watch what other states are doing?” asked Davis. “Absolutely.”

In May, a study by the Urban Institute estimated that due to the COVID-19 pandemic, as many as 43 million people could lose both their jobs and their employer-sponsored health insurance.

But the burden would not fall equally. In states with expanded Medicaid programs, over half of the newly jobless could gain Medicaid coverage. In states that didn’t expand the program, only about a third would be eligible.

In holdout states, there has been a noticeable uptick in support for Medicaid expansion since the pandemic tightened its grip in March. Commentators, medical organizations, and grassroots groups have increased their calls for expansion in red states like Alabama, Texas, Florida, Kansas, Georgia, and the Carolinas.

In March, the North Carolina Department of Health and Human Services asked the federal Centers for Medicare and Medicaid Services (CMS) for an emergency waiver to allow Medicaid coverage for care related to COVID-19 for all residents earning less than 200 percent of the federal poverty level.

As of mid-June, CMS had not made a decision. But in May, the federal government did grant a similar waiver to Florida, allowing the state to expand Medicaid coverage for COVID-19 cases.

Though Medicaid is popular now and widely accepted by the public, that was not always the case. While the original Medicaid program for lower income Americans was signed into law in 1965, it was another 17 years before every state agreed to participate.

History may be on the verge of repeating itself. Given the fact that a recent poll showed residents in holdout states favored Medicaid expansion by a 61–29 percent margin, improved health coverage for millions more Americans could be just around the corner.

Related front page panorama photo credit: Adapted by WhoWhatWhy from Yes On 802 and Yes on 2 / Twitter.