Who Thinks About Nuclear War in a Time of Plague? - WhoWhatWhy
Reading Time: 6 minutes

It’s less than two minutes to midnight, according to the Doomsday Clock, designed by the Bulletin of the Atomic Scientists in 1947 to express “the world’s vulnerability to catastrophe from nuclear weapons, climate change, and disruptive technologies in other domains.”

The Doomsday Clock has been as far as 17 minutes from midnight — in 1991, as the Cold War seemed to end and “peace dividends” were widely anticipated.

Since then, however, hardliners — especially in the US — have refused to take peace for an answer. This January, at the beginning of the presidential election year, the atomic scientists moved the Doomsday Clock closer to midnight than ever — 100 seconds.

The political impact of this urgent alert appears to have been minimal. American nuclear policy continues to push the world closer to midnight with little public discussion or resistance.

The Trump administration has executed a major escalation of offensive nuclear capability by deploying “small” nuclear weapons on US submarines. In nuclear parlance, a small nuclear weapon is about the size of the bombs used on Hiroshima and Nagasaki. In strategic military thinking, smaller nuclear weapons are considered more usable just because they are smaller.

Since the turn of the year, the US has deployed small nuclear warheads on submarines such as the USS Tennessee out of Kings Bay Submarine Base in Georgia, ready for use anywhere within range of a Trident missile (7,500 miles, accurate within a few feet). A Trident missile can carry as many as a dozen independently targeted warheads.

In June 2019, Democrats on a House subcommittee added language to the National Defense Authorization Act for Fiscal Year 2020 prohibiting the deployment of a low-yield warhead on a Trident D5 missile. Reflecting the militarized mindset of Congress, that language did not survive final passage of the bill.

US nuclear policy has always reserved the right to use nuclear weapons in a first strike, the Trump administration being no exception. Efforts to adopt a No First Use policy have always failed in Congress. On January 30, 2019, Democrats in the House and Senate introduced legislation intended to prevent the US from being the first to use nuclear weapons in the future. The bill, S.272, introduced by Sen. Elizabeth Warren (D-MA) with seven co-sponsors, reads in its substantive entirety:

“It is the policy of the United States to not use nuclear weapons first.”

This bill was referred to the Senate Foreign Relations committee, and the Senate has taken no further action on it. Its companion bill in the House, H.R.921, was also referred to committee, with no further action by the House. According to polls, most Americans already believe that the US should not be the first to use nuclear weapons. This majority perspective has no way to become law in contemporary American politics. 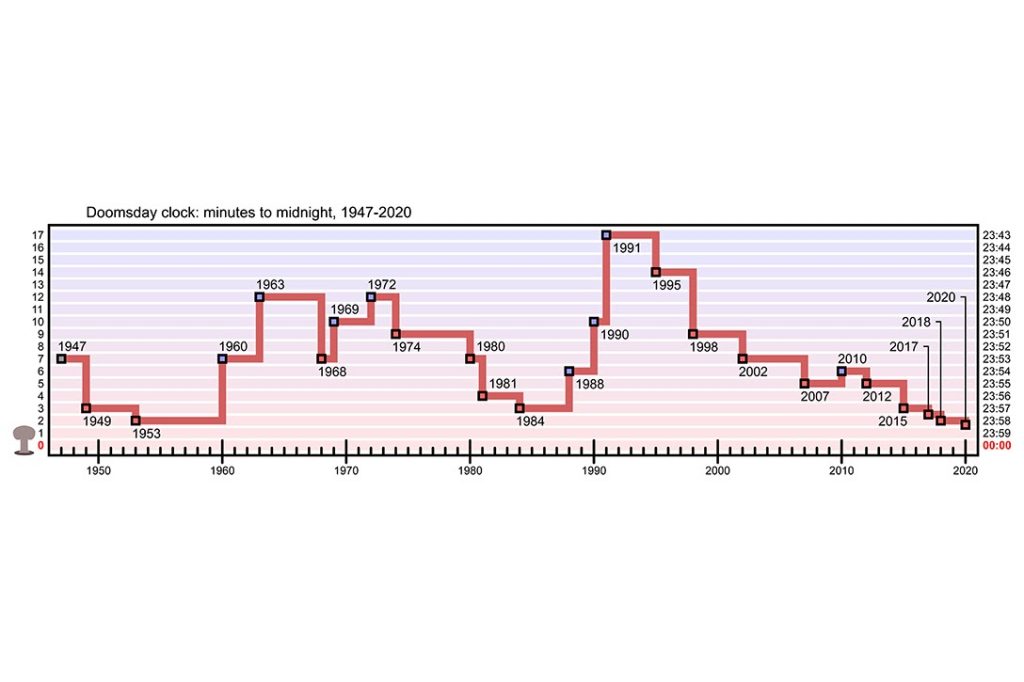 A graph showing the changes in the time of the Doomsday Clock since its inception in 1947. Photo credit: Fastfission / Wikimedia Commons (CC0)

A second House bill, requiring an act of Congress before a president is allowed to carry out a first strike nuclear attack, was filed January 17, 2019 by Rep. Ted Lieu (D-CA) and 62 co-sponsors. The bill’s core provision sought to reinforce the Constitution’s assignment of the right to declare war to Congress:

Notwithstanding any other provision of law, the President may not use the Armed Forces of the United States to conduct a first-use nuclear strike unless such strike is conducted pursuant to a declaration of war by Congress that expressly authorizes such strike.

This bill was referred to the House Committee on Foreign Affairs. Despite being controlled by Democrats since January 2019, the House has taken no further action on enforcing the constitutional restraints on the president’s ability to make war.

Former Vice President Joe Biden expressed support for a No First Use policy in January 2017. He has not made the nuclear threat one of his major campaign issues.

The Obama administration, in its 2010 Nuclear Posture Review, reserved the right to use nuclear weapons first, while promising to develop conditions appropriate to a No First Use policy.

The Obama administration never got there.

With no dissent from Biden, the administration initiated a trillion-dollar upgrade of US nuclear war fighting capacity, and Trump has reinforced it, creating the conditions for an accelerated global arms race.

As a presidential candidate, Biden has not laid out any detailed, substantive foreign policy. Nor has he tried to shed his decades of center-right orthodoxy. Biden’s lengthy foreign policy interview with the New York Times in February is replete with assertions that represent the tired and presumably “safe” positions of the past. Biden offers no vision of a peace-seeking, activist presidency.

For example, rather than simply seeking to reestablish the Iran nuclear deal of 2015 that was working until the US pulled out, Biden takes the position that it’s the Iranians that need to prove their good faith. In Afghanistan, he promises to pull out all the US troops except the ones still stationed there. He is content to maintain hostility with Russia, without elaboration, and he outlines the basis for a new cold war with China:

The United States should be pushing back on China’s deepening authoritarianism, leading the free world in support of the brave people of Hong Kong as they demand the civil liberties and autonomy promised to them by Beijing. The same is true for the unconscionable detention of over a million Uighurs in western China. This is no time for business as usual.

In February, just before his primary fortunes turned around, Biden was on CBS News claiming, “The Russians don’t want me to be the nominee, they like Bernie.” This came two days after the Washington Post reported that US intelligence officials had briefed the Sanders campaign that the Russians were suspected of helping Sanders in nonspecific ways. So Biden turned the ambiguity into an opportunistic twofer, not only launching an evidence-free red-baiting smear against Sanders, but packaging it in a gratuitous provocation of the Russians.

Demonizing other countries is rarely diplomatically useful, even if somehow justifiable. In a nuclear world, antagonizing the next two largest nuclear powers may be business as usual, but where has that gotten us?

On March 5, President Donald Trump tweeted support for the nuclear nonproliferation treaty and promised to propose “a bold new trilateral arms control initiative with Russia and China to help avoid an expensive arms race.” In reality, the US set out on that expensive arms race during the Obama administration.

We live in a world with an estimated 13,355 nuclear weapons (some estimates are as high as 15,000 in total). That’s roughly enough explosive power to destroy the planet 133 times over (or more).

Besides Iran, two other Middle Eastern countries are suspected of developing nuclear weapons: the United Arab Emirates (UAE) and Saudi Arabia. The UAE, in 2009, hired a South Korean firm to build its Barakah nuclear plant (in Arabic, barakah means “divine blessing”). Scheduled to come online in 2020, Barakah will be the first nuclear power plant on the Arabian peninsula. It is already raising safety concerns as well as the possibility of nuclear weapons development. Saudi Arabia trails the UAE in development, but secret agreements with the US Department of Energy make the Saudi nuclear status unclear. Responsible engagement by Congress remains unlikely even though the National Interest raised the specter of Saudi nuclear weapons almost a year ago.

The erratic and uncertain path of American foreign policy in recent years has undermined the confidence of some US allies in their reliance on protection by the US nuclear umbrella. This is true in Germany and Japan, and especially in South Korea, where US failures with North Korea have undermined South Korea’s sense of security and raised the calculation that South Korean security may eventually be dependent on South Korea’s own nuclear weapons.

As the Bulletin of Atomic Scientists explained its decision to advance the Doomsday Clock:

Humanity continues to face two simultaneous existential dangers — nuclear war and climate change — that are compounded by a threat multiplier, cyber-enabled information warfare, that undercuts society’s ability to respond. The international security situation is dire, not just because these threats exist, but because world leaders have allowed the international political infrastructure for managing them to erode.

When the Trump administration pulled out of the Iran nuclear agreement, its other signatories — Russia, China, UK, France, Germany, and the European Union, along with Iran — sustained the pact as the best available means of persuading Iran not to build a bomb. The administration continues to try to undermine the Iran agreement. Under Trump, the US has abandoned a host of international treaties and trade agreements, in particular the Paris accord on climate change, the UN Human Rights Council, and the Intermediate-Range Nuclear Forces Treaty, without replacing any of them with measures to improve global security.

Trump has toyed with the threat of using nuclear weapons against a number of countries since 2017. As far as we know, this has been more of a verbal distraction than an actual impulse. In July 2019 Trump said, “I could win that war in a week. I just don’t want to kill 10 million people. If I wanted to win that war, Afghanistan would be wiped off the face of the earth. … It would be over in — literally, in 10 days.” He also said: “this is not using nuclear.”

Trump did not explain that comment, and we have no idea if he knew what he was talking about. His desire to get the US out of Afghanistan manifested itself in February 2020 with an agreement with the Taliban (but with neither of Afghanistan’s two presidents). The agreement, which would have provided the US with the appearance of a graceful exit, has since fallen apart.

Nobody knows how likely it is that Trump would use nuclear weapons, or under what circumstances. Perhaps as a desperate attempt to win an election in trouble?

One response to “Who Thinks About Nuclear War in a Time of Plague?”