Most Americans experience gun violence only through the news. But a few, such as Dr. John Rose, who has witnessed the effects of such violence for nearly three decades, have front-row seats to the bloodbath.

In that time, he has seen more gunshot wounds than he can remember.

“My brain doesn’t have enough memory,” Rose, professor of emergency medicine at the University of California, Davis, told WhoWhatWhy as he recalled 26 years of dealing with gun violence. “They’re all horrible and preventable injuries.”

Rose works in Northern California at a level-one trauma center. Such places tend to have the most resources for emergency care. He encounters many gunshot injuries, some fatal.

Due to the epidemic of gun violence events, the US has earned a dubious distinction, according to Rose: It is one of the best countries in the world at treating gunshot wounds — so good the US military sends its physicians to trauma centers in the US, such as the ones in Oakland, CA, and Chicago, IL, where shootings are frequent.

The relationship between doctors and the military is a two-way street: The techniques used in emergency rooms for treating gunshot wounds are themselves adopted from the military.

“I think what’s unique is American physicians know how to take care of gunshot wounds like we’re in a war zone,” Rose told WhoWhatWhy. “It’s very embarrassing. Why are we having to take care of this?”

Based on three years of data from 2013 to 2016 conducted by the Nationwide Emergency Department Sample, a government database tracking emergency room visits, approximately 73,330 firearm-related injuries occur annually in the US. (This number excludes deaths by firearms.) The cost of treating these patients in the US is about $2.8 billion annually, according to a study conducted from 2006 to 2014, which measured emergency department visits and inpatient stays. 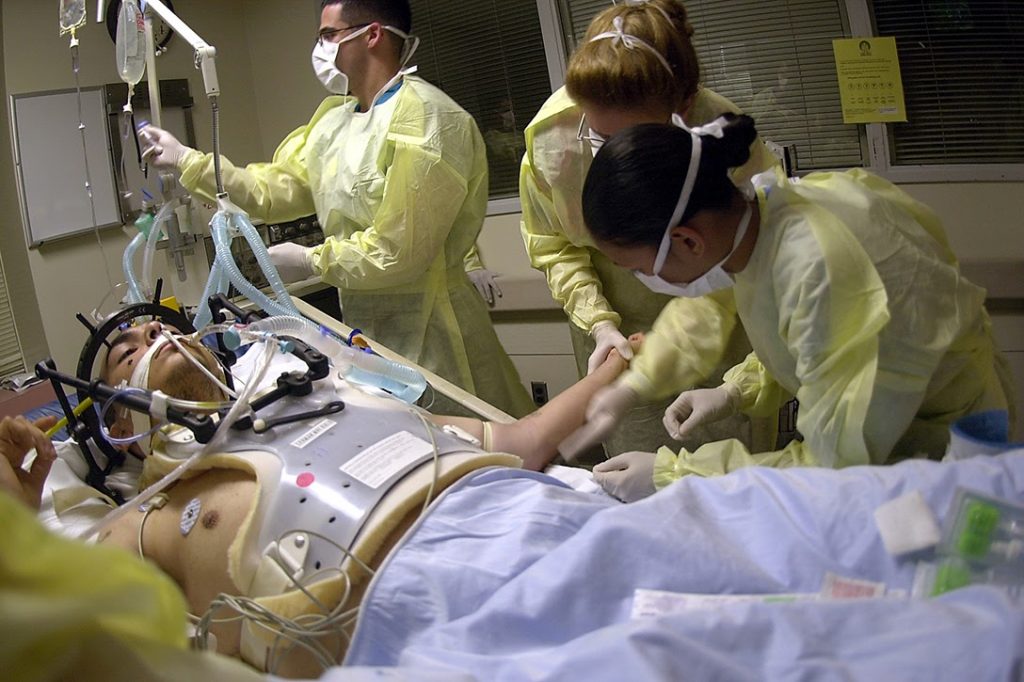 Medical personnel assess the treatment and prognosis of a patient with a gunshot wound to the head in the Intensive Care Unit (ICU) at the University of Southern California (USC) Medical Center. Photo credit: US Navy / Wikimedia

Gun violence doesn’t begin and end with the victim and aggressor. There’s a grim dimension that takes place under the fluorescent lights of emergency and trauma rooms. The doctors, nurses, and staff see wounds that are beyond salvaging. But even the injuries that can be repaired come with their own set of troubles.

Dr. Cedric Dark, assistant professor of emergency medicine at Baylor College of Medicine, told WhoWhatWhy that people tend to forget all the ways guns cause damage besides killing people. He notes that only a fraction of gunshot wounds end in death.

Many others, like a shot in the leg, or a failed suicide attempt that results in a head wound, or even “just” a victim of violence getting pistol whipped or threatened by somebody pointing a gun, all carry physical and emotional scars.

The baggage of this kind of violence weighs on the doctors and hospital staff as well. Working on a patient in an emergency situation isn’t the toughest part for Dark, who said that what comes after is often more difficult.

He recalled one case in which a patient succumbed to his gunshot wounds. But

what really got to Dark was talking to the patient’s family, including a brother who looked eerily similar to the 20-something man who died.

The father demanded to see his son, but Dark had to break it to the family that they would get no closure because the son had been involved in a homicide — his body was part of the evidence.

Doctors are left to deal with the emotional damage without being able to discuss the cases they see, due to federal privacy regulations. So they find different ways to deal without fully opening up.

“Some people do things like connect with nature or talk it over with their spouse,” said  Dark. “But a lot of what we do in medicine is to compartmentalize it, not only for gun violence. You can talk around certain things, but you can’t talk about it, which I think can make us callous and cold. You have to try to connect with people in that moment and show empathy, but you have to protect yourself.”

For some doctors, educating their communities about gun violence prevention gives greater meaning to the horrors they witness in the emergency room.

But those thoughts aren’t always well-received. In 2018, the NRA lashed out at doctors for releasing research papers that highlighted the damage inflicted by gun violence,  demanding the doctors “stay in their lane.”

Someone should tell self-important anti-gun doctors to stay in their lane. Half of the articles in Annals of Internal Medicine are pushing for gun control. Most upsetting, however, the medical community seems to have consulted NO ONE but themselves. https://t.co/oCR3uiLtS7

Dark, a gun owner, responded by starting the hashtag #ThisIsOurLane to prove that science and doctors play a big role in the discussion. For Dark, community involvement by doctors and scientists is one way to reduce gun violence. He speaks with state and city representatives and tells the patients’ stories.

Within the walls of their offices, doctors often try to talk to their patients about at-home gun safety, Dr. Patrick Carter, assistant professor of emergency medicine at the University of Michigan School of Medicine, explained to WhoWhatWhy.

Sharing information with colleagues and lawmakers is another step that Carter believes can make a difference. But he believes the most effective way is to treat the issue like a public health crisis.

Carter cited the vehicle safety campaigns developed since the 1950s as an example of how the US can curb the gun violence epidemic. He noted that traffic fatalities are down because of safer roads, seat belts, vehicles with more built-in safeguards, and other rules and regulations. Carter pointed out that all of these improvements were informed by scientific data.

“A way to address it is to use scientifically driven information, regardless of people’s political views about firearms and ownership,” Carter suggested. “If the focus is on injury risk, then we can focus on a scientific approach. Firearm injuries are extremely preventable.”