Labor Day is a national holiday, but probably not one that generates much celebration in the Trump White House, which is moving to add regulatory insult to the existing injury of policies that depress the wages of low-income workers.

Worker pay has languished for years partly because Congress has never made a simple tweak to the federal minimum wage that would obviate the recurring debate about whether to raise it. The tweak would simply index the minimum to inflation, letting it rise in step with the general rise in prices, just as we do with Social Security and unemployment benefits. (Alternative approaches would link it to productivity or to the median wage.)

Because this has never been done in the 81-year history of the law, the real minimum — its actual purchasing power after accounting for inflation — is 31 percent lower today than in 1968, says the Economic Policy Institute, and 17 percent less than when it was last raised, in 2009, to $7.25 an hour. (EPI describes itself as non-partisan, though it’s funded partly by labor unions.)

At that rate, a full-time worker earns about $15,000 a year, a quarter of median household income in 2017, according to the latest Census data available (2018 data are out next week). It was also below that year’s $16,985 federal poverty threshold for a one-parent, under-65 household with a dependent child. June 16 marked the longest period in the history of the federal minimum without an increase.

So much for the injury; now for the insult: The administration is proposing to index another sort of income, namely the capital gains that wealthier folks earn on their investments. It would work like this: A $1,000 investment doubles in 10 years, which at current tax rates would incur a bill of $150. But if prices rise 30 percent in that period, the original $1,000 is treated as $1,300, leaving only a $700 gain and a $105 tax bill — a 30 percent tax cut. 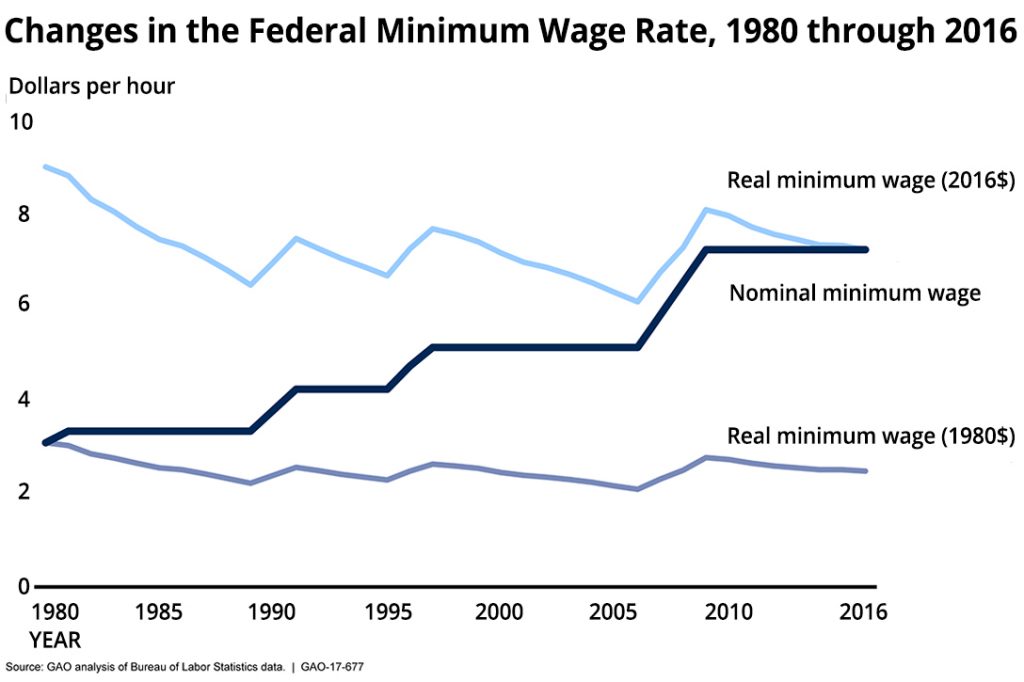 Capital-gains taxes already favor the wealthy, if only because the rates are so low. Investments sold in less than a year pay 20 percent (those with income exceeding $435,000 may pay an additional 3.8 percent). There is no justification for treating investment income any differently than earned income, especially when the wealthier people are, the more of their income they derive from capital — around 50 percent for the top 0.1 percent of the income distribution, as against an average of 12 percent across the board.

Indeed, one argument for keeping capital-gains tax rates lower than those for ordinary income is that capital gains are not indexed to inflation. Indexing capital gains without raising the rates at which they’re taxed would therefore be another big orange insult to lower-income people, many of whom, ironically, voted orange.

While not indexing the minimum wage has had dire consequences for low-income people, it’s been good for their employers. Because the federal minimum is so low, many workers who make it are on public assistance. According to the UC Berkeley Center for Labor Research and Education, 52 percent of fast-food workers were on public assistance in 2015, costing taxpayers $153 billion. In 2016, according to the Government Accountability Office, 29 percent of families with a worker earning the federal minimum wage were enrolled in Medicaid, the federal health-insurance program for low-income households.

The EPI wrote in 2016 that raising the federal minimum wage to $12 an hour by 2020 would reduce means-tested public assistance spending by $17 billion annually. That’s a drop in the ocean of federal spending, but it’s $17 billion that ought to be coming from employers, not taxpayers.

By contrast, indexing capital gains would add $102 billion to the federal debt over 10 years, according to a Wharton School study.

To be sure, most people make well above the federal minimum, which is lower than the minimums of 29 states, the District of Columbia, Guam, and the Virgin Islands. The average private-sector hourly wage in July (excluding farm workers) was $27.98. In the leisure and hospitality sector, which includes fast food, it was $16.59. Only 2.3 percent of hourly wage earners made the federal minimum wage or less in 2017. 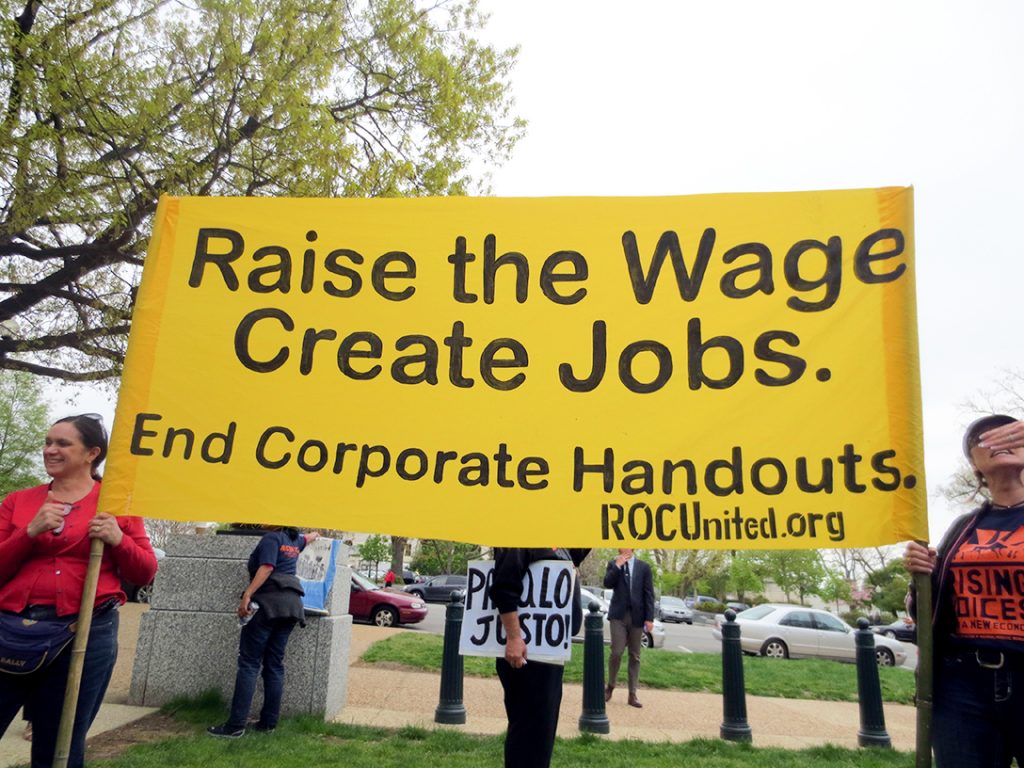 But that’s still lots of people whose real wages are potentially eroding each year through inflation, and even those with higher wages feel the impact. Employers pay most workers more than the minimum in order to secure good workers and minimize employee turnover. Raising the minimum tends to raise these wages too.

“A higher minimum wage always has an elevator impact on the compensation structure,” says Sam Pizzigati, who writes about economic inequality at the Institute for Policy Studies.

Opponents of the minimum wage say it kills jobs that are the province of younger workers anyway, like high school kids flipping burgers part-time. It’s true that young people figure prominently among minimum-wage earners, and that the average age of a minimum-wage earner isn’t easy to determine. But is there any reason the real wages of teenage fast food workers should be shrinking every year?

It’s debatable whether the minimum kills jobs at all, but even if true, should preserving jobs require cutting the real wages of the most vulnerable people every year? If so, why doesn’t this apply to higher-income wage earners?

The case for indexing the minimum seems rather obvious, so why has it never been done? Partly because of opposition from business. But also, says Pizzigati, because indexing hasn’t historically been a big part of labor’s agenda. Because inflation was generally so low in the three decades after World War II, labor’s focus was traditionally on improving real purchasing power, not keeping up with price levels. Sure enough, the federal minimum increased seven-fold between 1938 and 1974, while prices rose only 2.5-fold, going by the Bureau of Labor Statistics inflation calculator.

“Labor has never concentrated on indexing,” says  Pizzigati. “The fights have always been about one-time increases.”

Indexing is not a radical idea, even in an era of low inflation. Of the 45 states with their own minimums, eight already index and nine more will start in the next few years. Congressional legislation introduced in 2013 would index the federal minimum, but it has languished since. The House passed a bill in July that would index the minimum to median income starting in 2026, but its chances of making it through the Republican Senate are slim.

Trump economic advisor Larry Kudlow has assembled a panel to look at the possibility of implementing capital-gains indexing by regulatory fiat rather than with congressional consent. Just one problem: A 1992 Justice Department memorandum found that the administration does not have that authority.

Maybe alternative facts have altered matters since then, because a letter released by Texas Sen. Ted Cruz (R) and signed by 20 other senators urges Treasury Secretary Steve Mnuchin to “use your authority” to implement indexing, lack of which “punishes taxpayers for the mere existence of inflation and is inherently unfair.” Doesn’t it punish minimum-wage workers even more?

It’s worth noting that the people most likely to favor Trump’s proposal are the same folks always barking about “takers” and getting government out of the way so that heroic “job creators” can work their magic. Maybe they should rethink this particular article of capitalist faith. It’s easy to be a rugged capitalist when other people are paying your bills.

They’re also most likely the sort of folks who are spending today on yachts and golf courses, while the folks whose income really needs indexing will be sweating over deep fryers for a third less than they would have earned 50 years ago.

Where are all those boats that the rising economic tide is supposed to lift? You won’t find many behind the taco bar. Try looking in the Hamptons.