The Boston Globe recently suspended without pay one of its longest-tenured and most-vaunted columnists, Kevin Cullen, due to inaccuracies uncovered in his reporting on the Boston Marathon Bombing.

Is the Globe finally owning up to its own sensationalist Marathon Bombing coverage that reeked of pro-law enforcement boosterism?

But the paper did inadvertently shine a spotlight on some of its most jingoistic Marathon Bombing reporting by throwing one of its popular columnists under the bus — five years after he wrote most of the offending material.

Cullen was suspended for three months because he misrepresented his own proximity to the bombing and its aftermath; he parroted unconfirmed hearsay as fact that he picked up from first responders at a Boston watering hole; he mischaracterized his relationship to some of those first responders as well as some of the victims.

The controversy flared up after discrepancies in one of Cullen’s fifth-anniversary columns were pointed out and roundly criticized in April on the Kirk and Callahan show on Boston’s WEEI Radio. Kirk Minihane, one of the show’s hosts, also spelled out in a WEEI Radio blog post the discrepancies, embellishments, and outright falsehoods.

But tellingly, Minihane’s beef with Cullen’s falsehoods seems to be primarily that they enable him to “cast himself as a tough guy” in his columns — that he implies many of the “firefighters, cops and bartenders who knew [him] well, were his buddies … Cullen was one of them, one of the good guys.”

In other words, Cullen’s transgression as far as Minihane is concerned, is not that he would openly side with and uncritically report law enforcement’s version of events with nary a whiff of skepticism.

No, Minihane’s chief complaint is that Cullen is a poseur.

Yet, as embarrassingly bad as Cullen’s “one of the good guys” fibs might look in hindsight, the difference between his reporting and that of the rest of the flock is really only a matter of degree.

Cullen’s columns, after all, were the epitome of Boston Strong™.

Longtime WhoWhatWhy readers are well acquainted with the slew of anomalies about this story that were flat-out ignored by deep-pocketed outfits like the Globe. Conversely, the same outfits practically emptied those pockets on emotionally charged patriotic puff pieces about “how we all came together” — America vs. The Terrorists, etc., etc.

Cullen, for his part, spent his time writing articles with titles like “The Difference between Us and Them.”

For instance, federal officials never definitively told the public whether the Tsarnaevs had help constructing the bombs — or where they were constructed. Almost no one in the mainstream seemed to care — the one exception being Boston-based journalist Michele McPhee.

It was obvious, early on, that the FBI — who first denied knowing, then admitted they had investigated the Tsarnaevs before the bombing — was hiding something. In fact, the Bureau repeatedly tried to minimize federal law enforcement’s prior interactions with this family of asylum-seekers from a restive Russian republic with major geopolitical implications. 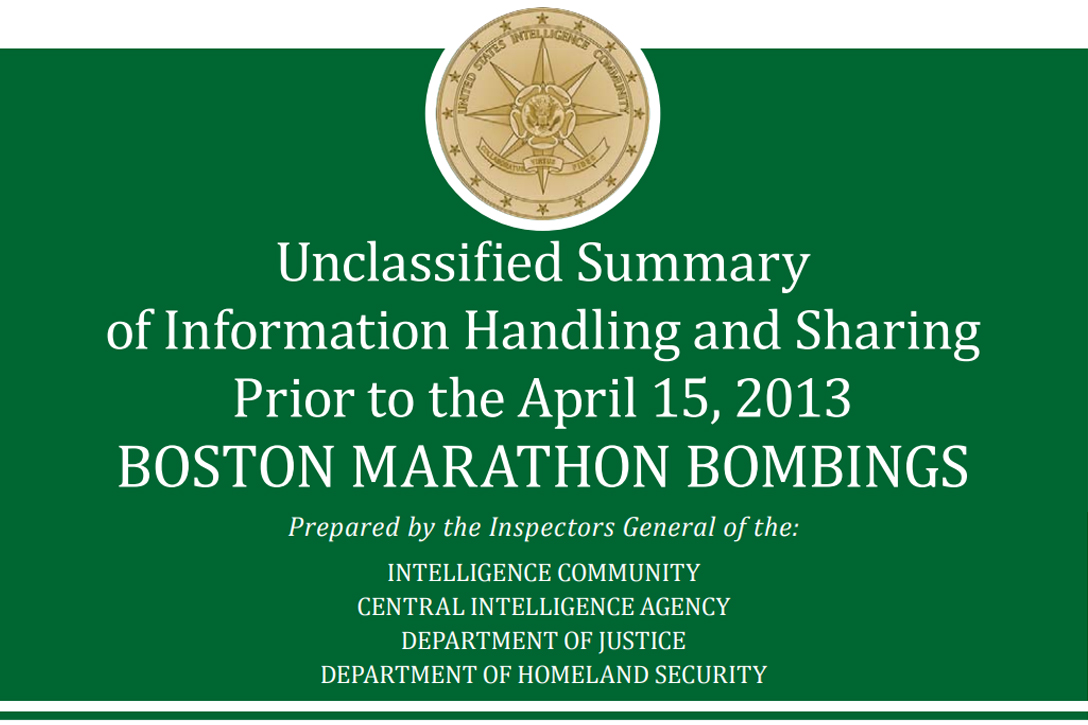 It’s been more than five years since the Inspector General of the Intelligence Community (IGIC) wrote a report on what it knew about Tamerlan Tsarnaev before the bombing — the vast majority of which still remains classified.

Yet, no one in the media made much of a fuss about the unprecedented levels of secrecy exhibited by federal agencies surrounding the case.

That is, unless the secrecy was hiding some juicy human interest story — then the establishment media raised holy hell. The Boston Globe and WBUR, Boston’s National Public Radio affiliate, filed multiple motions with the court imploring the judge in Dzhokhar Tsarnaev’s trial to release the names of jurors, which were still being withheld three months after they found the defendant guilty.

Undoubtedly, it was in order to plumb the depths of the jury pool — to find out “what it felt like” to put someone to death. Or perhaps they wanted to tell readers “how emotional it was” to listen to the obviously gut-wrenching testimony of each victim. Only one juror subsequently agreed to be interviewed.

But when it came to the hushed proclamations of law enforcement officials, credulity, complacency, and a total lack of skepticism were the only acceptable tenets of the Post-Marathon Catechism — oh, and patriotism.

Journalists eager to prove they too were Boston Strong repeated these (largely improper and probably illegal) “leaks” without question, caveat, or vetting, thereby solidifying the Tsarnaevs-as-lone-wolves gospel that is now believed by all but the most blasphemous among us.

Forget questions about possible FBI missteps or malfeasance. And forget the fact that an alarming number of terror attacks and “thwarted” attacks involve FBI informants, provocateurs, and a whole host of shadowy characters working for federal agencies before or at the time of the nefarious actions.

Perhaps the apex of the Boston media’s maladaptive response to the Marathon attack was when WGBH’s veteran newscaster Emily Rooney empaneled a handful of Boston journalists to consider whether it was even necessary to use the word “alleged” anymore when referring to Dzhokhar Tsarnaev’s guilt.

“In the case of Dzhokhar Tsarnaev, I wouldn’t have a big problem if somebody simply described him as ‘The Boston Bomber’ because, the evidence is overwhelming to the point (that) there is virtually no other side to this,” Northeastern journalism professor Dan Kennedy declared before the trial started. 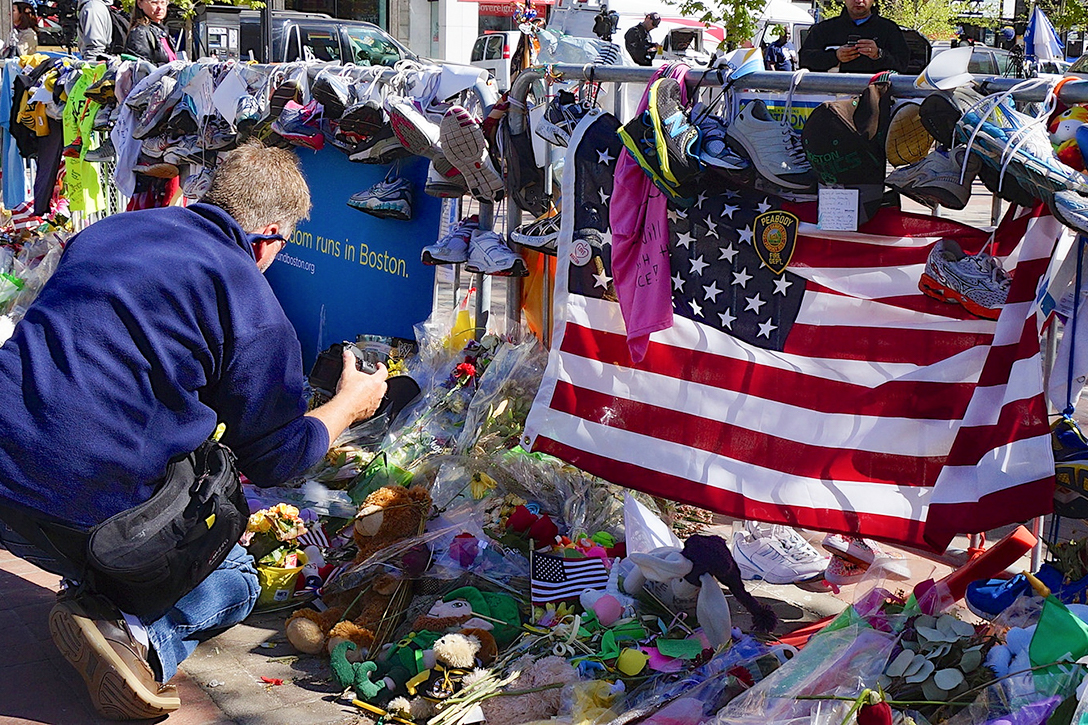 It’s hard to watch. Even the panel’s defenders of the word “alleged” pepper their explanations with shifty-eyed caveats ensuring that they too believe Tsarnaev to be guilty — as if there were a lynch mob in the studio audience.

To give Kevin Cullen credit, he did raise a question about the actions of the FBI after the bombing, albeit from “a Boston cop [he] know[s], who was at the finish line when the bombs exploded and who saved lives that day.” (Got all that?)

“Who were the FBI agents,” Cullen’s cop friend asked, “who interviewed Tamerlan Tsarnaev after the Russians raised questions about him two years before the bombings, and why didn’t they recognize Tamerlan from the photos the FBI released?”

Good question. Although, even there, Cullen felt the need to offer up his skepticism by law enforcement-approved proxy.

He was instrumental in blowing open one of the most consequential FBI corruption scandals of all time when he zeroed in on the relationship between the murderous mobster Whitey Bulger and the Boston FBI and its subsequent cover up.

But something apparently happened after those bombs went off in 2013 on Boylston St. (that derangement syndrome thing?). It wasn’t just Cullen. Since 9/11, we’ve all been conditioned to take these attacks personally. They’re not just horrific crimes — they’re crimes against me, you, grandma, and Apple Pie. When they happen, we’re supposed to buckle up, rally the troops, and thank our first responders for their service — buy them a drink at the bar — not ask them uncomfortable questions that might introduce a little nuance into the equation. This is war!

Except, it isn’t. And it shouldn’t be treated like one. It’s a terrifying and heinous act of violent crime — not much different from what keeps happening in our children’s schools on a regular basis. The more we turn every heinous act of violence (and, increasingly, drug peddling) into a matter of “national security,” the more we lose control of our constitutional republic.

So maybe Cullen’s brief unpaid vacation will allow him time to reflect on his outsized role in influencing a significant bloc of Americans (particularly other journalists) — and maybe rediscover his own history of holding accountable the self-protecting institutions that wield enormous power over us all.

Will the real Kevin Cullen please stand up?