A strike that could blaze a trail for a new labor movement ended in West Virginia last week. The teachers went back to work after the state legislature agreed to give all state employees a five percent raise and set up a task force to recommend changes to their health insurance program.

With organized labor facing a crucial Supreme Court decision later this year, the successful tactics used by the West Virginia teachers could point the way for a comeback by labor nationwide.

Veteran educator Tiphani Davis knows that big things can start from small beginnings. The last straw for her was when the state proposed a plan to place a Go365 app on the cell phones of West Virginia teachers that would measure their vital health statistics such as weight, blood pressure, heartbeat, and how much exercise each teacher did each day.

While there are “points” that can be earned through good measurements with this app, the downside would be that, if teachers were to not keep their vital stats current on the app, they could see a $500 rise in deductibles and additional premium increases. Program administrators defended the program, claiming that obese and other workers who follow unhealthy lifestyles were driving up insurance costs for all enrollees.

“It was disguised as an incentive but really was a requirement in order to keep our premiums and deductibles down,” Davis, one of several teachers interviewed for this story, said.

“This was the first thing that made me call my union rep,” Davis stated. She was active throughout the entire strike.

Ironically, in a week that saw widespread public support for a labor campaign and some short-term victories for the teachers, there was an ominous development for public sector unions. The Supreme Court heard arguments in the Janus case, which could make it illegal for public employee unions to charge non-members who benefit from collective bargaining. Most observers feel this could potentially devastate the finances of public sector unions and, along with it, their political clout.

Yet even if the worst does come to pass for organized labor, some see signs of hope in the public outreach tactics of the West Virginia teachers in a post-Janus world.

Is Outreach the Antidote for Labor’s Woes?

The strike’s origins were rooted in reaching out beyond the traditional union hierarchy and winning the public to the side of the strikers. The first organizing meetings were held on Facebook, not at union halls. Winning public support for their cause was baked into the DNA of this strike. Even before the strike began, teachers made it a point to pack meals for students and worked to arrange child care for parents. And outreach attempts were not limited to the general public.

All school employees were invited to join the initial strike organizing committees — not just teachers, and not just union members. And this initial strategy may well have broadened support for the strike.

“Half of the teachers of West Virginia are not members of either [the West Virginia Education Association or West Virginia Federation of Teachers]. And yet they have been incredibly united in this action,” labor historian and West Virginia University professor Kenneth Fones-Wolf told WhoWhatWhy.

English teacher Erica Rodeheaver noted that while the West Virginia teachers were 20,000 strong, they were striking on behalf of 240,000 to 250,000 other state employees — many of whom, like state troopers, could not go on strike themselves. “I have had so many people reach out and say thank you for striking for us,” Rodeheaver said.

“School superintendents in all 55 West Virginia counties supported the strike,” Toni Poling, an English teacher and recipient of a teacher-of-the-year award, noted.

The West Virginia Education Association (WVEA) and West Virginia Federation of Teachers received mixed reviews from strike activists. Rodeheaver expressed dissatisfaction with the initial strike settlement, which fell apart. She stated how disconcerting it was for her colleagues when the governor and leaders of the two state unions met behind closed doors and then made the settlement announcement via a national press conference.

“All of this was done without consulting the rank and file. I feel some of the unions have lost touch with what the people want,” said Rodeheaver. 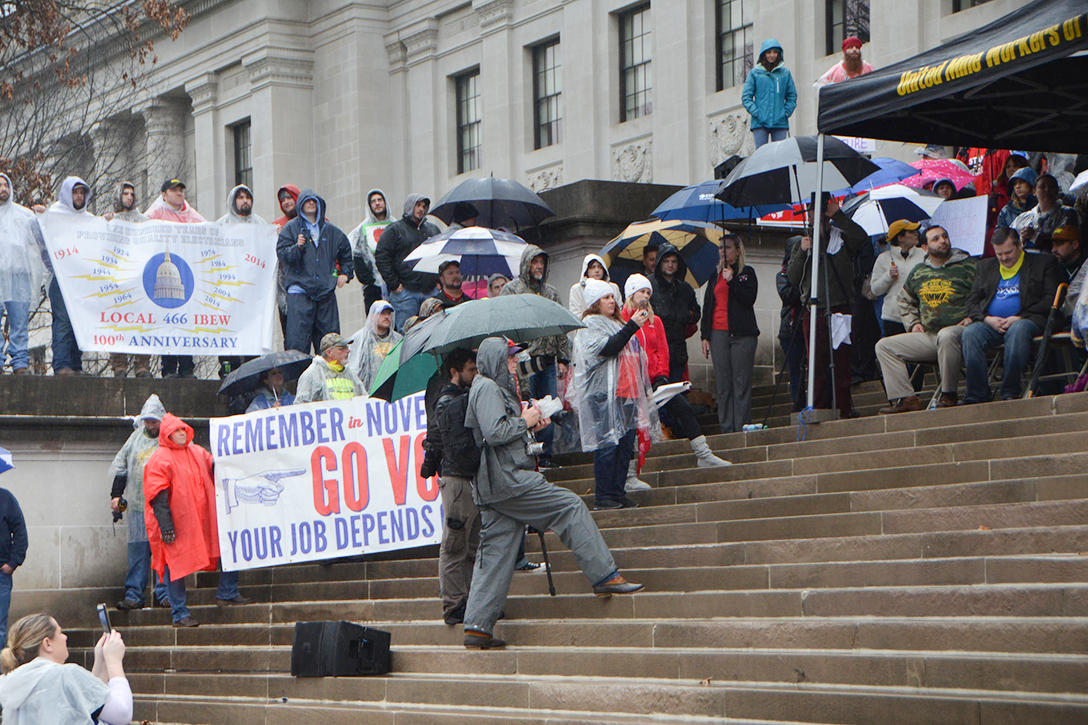 That view was not unanimously shared by other strikers. Poling observed that while initial strike organizing did start on social media, the two unions have been very supportive of the strike.

“It was our unions that called for a unified walkout”, Poling said. She also saw the grassroots organizing by teachers combined with the politically traditional lobbying by union leaders as complimenting each other, not mutually exclusive.

Another point of contention among state teachers was the endorsement by the WVEA of Governor Jim Justice’s (R) reelection campaign. His initial wage and benefit offers to strikers disappointed many, to say the least.

Rodeheaver felt the decision to endorse him was due to his status as a Democratic candidate (he switched parties in 2015). She saw this decision as “not very smart.” Poling was more charitable. She stated that unions can only look at the past record and can’t predict the future.

“Leaders emerged from below and are really doing the work,” one striker told Jacobin. Another noted that strike leadership was largely based on communities and not always directly tied to the unions themselves. He noted that these communities looked to local leadership for what to do, including how to organize and when to hold votes and walkouts. And all of this activity went on in a right-to-work state that bars public employee unions from collecting agency fees from non-members. For those union advocates dreading the fallout of a negative decision in the Janus case, this may be reason for hope.

Straws in the Wind

The success of the West Virginia teachers strike in a state that bars collecting mandatory union dues is not the only success story. After the Supreme Court two years ago took up the Friedrichs case, public employees’ unions were also in a panic mode. This case would have also barred public sector unions from collecting agency fees from non-members. But with the death of Judge Antonin Scalia in 2016, the Supreme Court deadlocked four to four and upheld the status quo. 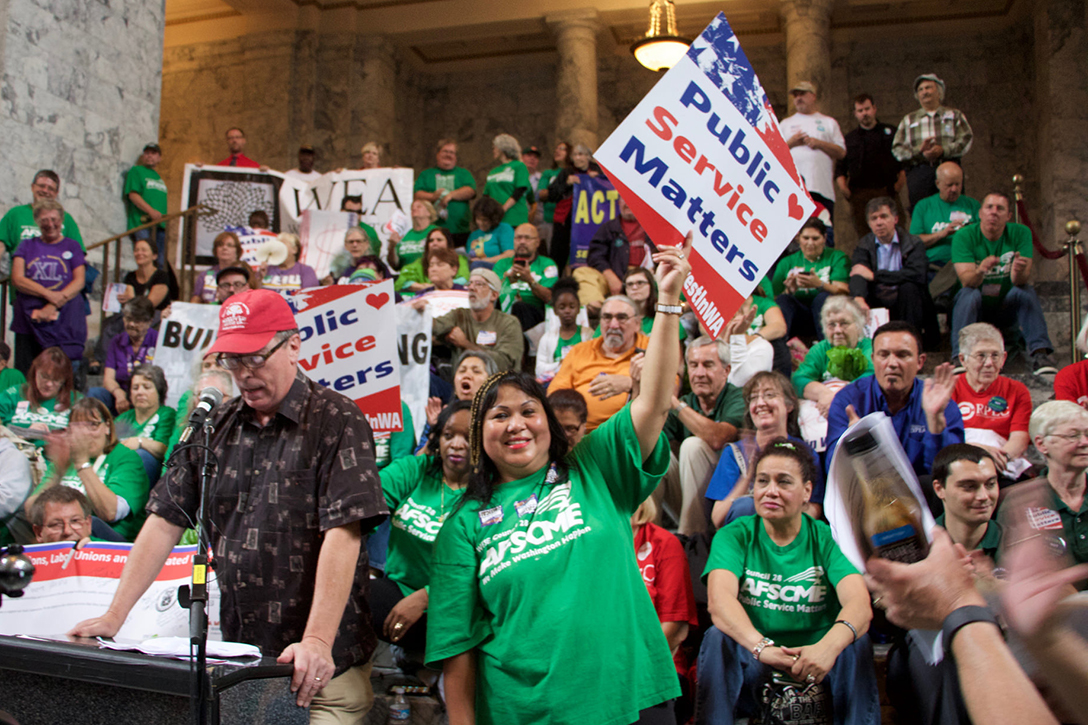 In response to that threat, big national public sector unions such as AFSCME and the National Education Association launched ambitious efforts to convert agency fee payers to dues paying union members. The idea behind this move was that full-fledged union members would be more likely to stay with the organization — regardless of whether right-to-work was on the books — than would non-members forced to pay agency fees.

AFSCME Local 3299 represents workers at the University of California. The 22,000-member local conducted a massive outreach campaign that signed up 4,000 agency fee payers as union members.

The union at Glendale Community College in California has achieved similar results. Only 66 percent of workers there were union members in 2015. After a strong outreach campaign, in two years they upped that membership percentage to 95 percent.

The United Faculty of Florida (UFT), which represents faculty at all public universities in Florida, overcame adversity in another right-to-work state that outlaws public sector unions from collecting agency fees. After an aggressive membership outreach campaign, UFT membership more than doubled from 3,000 to 7,000 between 2001 and 2010. This was in spite of the agency fees ban and a largely hostile Florida legislature.

Yet even given these examples, it would not be wise to underestimate the potentially destructive impact on public employees’ unions from an unfavorable Supreme Court decision. In an ominous sign for organized labor, survey data shows that some 24 percent of unionized government employees don’t believe workers need strong unions. And some of the results from the field on the impact of states passing right-to-work laws barring mandatory dues, are no less reassuring.

A recent study compared three Midwestern states that passed right-to-work with three neighboring states that did not. It found big differences in unionization rates. The rates of the three new right-to-work states — Wisconsin, Michigan, and Indiana — fell much faster than the neighboring states of Illinois, Minnesota, and Ohio. And public employee unions in those states have been hit especially hard.

For example, from 2010 to 2015, public employee union membership in Wisconsin dropped from 14.2 percent to 8.3 percent. The barring of agency fees was not the only factor in this drop. Act 10, passed in 2010, curtailed the scope of collective bargaining and no doubt played a big role. But many of that state’s union officials feel the ban on agency fees and a fall-off in funding also influenced this drop.

Using data from unionstats.com, it can be projected how a negative decision in the Janus case would impact organized labor. If right-to-work went national, based on labor data in right-to-work states, there would be an almost 10 percent increase in the number of public sector workers covered by collective bargaining agreements that would not be paying agency fees to that union in the 22, non-RTW, states. While that would be a serious blow to organized labor’s finances, it would not necessarily be a catastrophic one.

So, results from the field are mixed on the impact of a decision against labor in the Janus case. It is not beyond the realm of possibility that in the long run, it could awaken a sleeping giant. One of the arguments brought by the pro-union side in that case was “when unions are deprived of agency fees, they tend to become more militant, more confrontational, they go out in search of short-term gains that they can bring back to their members and say, ‘stick with us.’”

With potential statewide teacher strikes looming in Oklahoma and Kentucky, both right-to-work states, this theory could further be put to the test.

In any case, no matter what the outcome of the Janus case, many feel organized labor has to make adjustments. Said Professor Fones-Wolf, “Unions are going to have to develop these [worker and community outreach] strategies under any circumstances.”