Virginia Democrats suffered a crushing defeat in November 2016. Just one year later they were celebrating a rousing victory. What changed in Virginia? And does this turnaround hold lessons for Democrats — and Republicans — across the country?

Amanda Litman, who served as Hillary Clinton’s email director in 2016, was devastated by the campaign’s failure. But in the ashes of defeat she saw a glimmer of opportunity.

When a friend running for Chicago City Council told her that the Cook County Democratic Party was not willing to help her campaign, she realized that her party had a problem at the local level. She eventually connected with Ross Morales Rocketto, a political operative married to one of Litman’s friends from the Clinton campaign. They formed “Run for Something,” a new group dedicated to funding and supporting progressive millennial candidates running for local office — namely, school boards, city councils, and state legislatures.

“We focus on young people running for local office … making sure the next generation of Democratic officeholders looks like our voters, but also represents the people of this country,” Litman told WhoWhatWhy.

When it comes to winning the presidency, Democrats had done well for eight years. Barack Obama won in a landslide in 2008 and then got re-elected by a comfortable, if closer, margin in 2012. However, for those Democratic Party candidates gunning for seats in their state legislatures, city councils, and school boards, not so much. These down-ballot positions took a hit. The following chart showcases the Party’s predicament during Obama’s tenure in office: 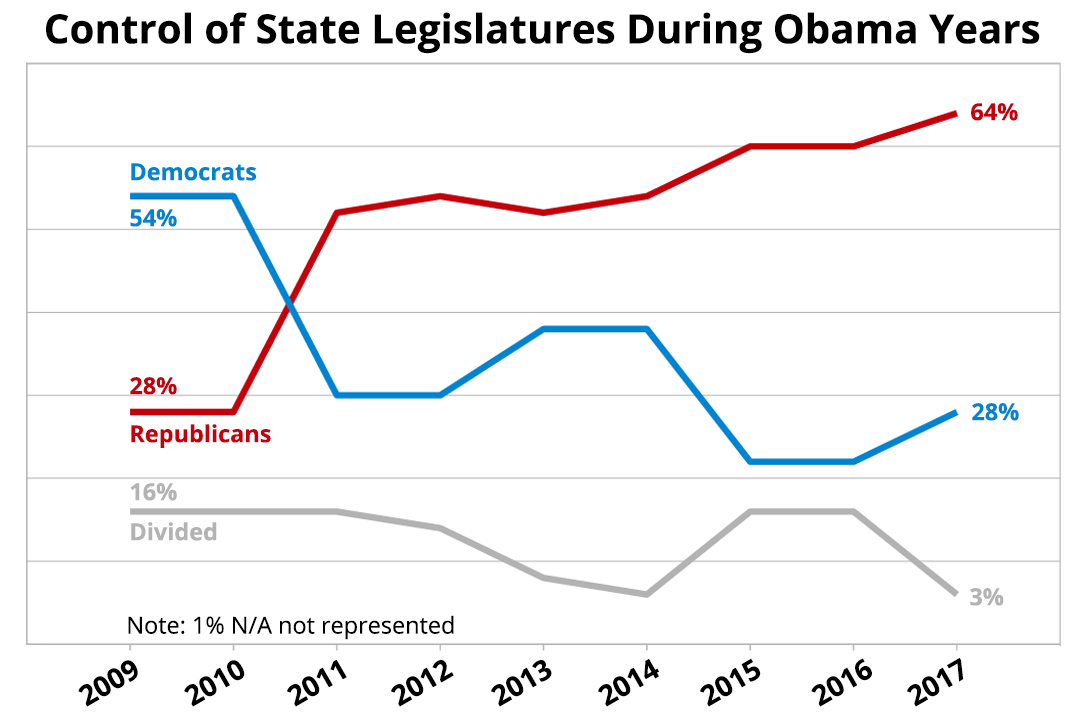 Democrats have lost almost 1,000 seats in state legislatures from 2008 to 2016. For the first time in history, they do not control a single legislative chamber in the South. Overall the party is at a very weak point at the state level.

“I don’t know how it gets any worse for the Democrats,” Lucy Flores told the New Republic. A party activist and Nevada state legislator, Flores added, “There is no national strategy — we do not invest in sustained engagement with voters outside of presidential elections.”

Flores’s sentiments are borne out by party expenditure numbers. In 2010, the GOP spent $30 million on state races as part of its strategy to control the once-in-a-decade redistricting process. This was three times the amount that Democrats spent. Apparently dumping money into campaigns worked, along with the national backlash against Obamacare and other liberal initiatives. Republicans picked up 675 legislative seats and gained control of 12 state legislatures.

“We can’t expect people in rural areas, in red areas, to vote for our presidential candidates or our gubernatorial candidates if they’ve never seen a Democrat running for school board or county office.”

“I love President Obama, but he and his administration allowed for the deterioration, the terrible deterioration, of the state parties over the last eight years,” said Mark Brewer, a former Michigan Democratic Party leader, in January 2017.

Local and state governments make decisions that affect the day-to-day lives of voters: Commercial, industrial and residential development, traffic, zoning, Medicaid expansion and more. In addition, many members of Congress, governors, and presidents launched their political careers in state and local offices. The lack of rising stars, or even a solid bench, has hurt Democrats in up-ticket races Litman said.

While she acknowledged that in the wake of Trump’s upset win there was an explosion of activist groups, Litman believes Run for Something had its special niche: supporting millennial progressives for down ballot offices.

ICYMI: Last night we were part of the #PeoplesSOTUResponse — obviously, we call Trump a racist sexist bigot, then we pitch YOU on running for office. Watch the full response: https://t.co/5Wy4N41hve pic.twitter.com/VO7p05HNIz

And, in its first electoral cycle in 2017, the group’s showing has surprised many. Out of the 72 candidates it endorsed for local office, 32 won — a win rate of over forty percent. That is impressive for an organization barely a year old. The group aspires to endorse a thousand candidates for local office in the 2018 election cycle.

Litman demurred when asked by WhoWhatWhy if she thought the organization could match its 2017 win rate this year. More important than the actual wins were the positive impacts of getting new, young faces on the ballot, she said.

While she hopes many of the organization’s candidates will win, Litman said that — win or lose — their campaigns should reap benefits that will have an impact after Election Day. These include engaging voters, rallying volunteers as active participants in the democratic process, and holding incumbents accountable.

When asked what made Run for Something’s candidates different and a bit outside the political norm, Litman cited a few factors to WhoWhatWhy. The organization works only with first- or second-time (non-elected) candidates: no incumbents need apply. And Run for Something only endorses candidates 35 years old or younger. Litman finds all this refreshingly simple:

“People that we work with intensely are running because they want to solve a problem and think local government is the way to do it,” Litman said. “And that means their campaigns are driven by such a clear motivation and their passion for it. There is no external validation they are looking for.”

Take for example Kevindaryan Lujan, a Run for Something success story from 2017. He won 67 percent of the vote in a successful campaign for the Orange County, NY, legislature. In an interview with WhoWhatWhy, he cited his highly motivated volunteers, public backlash against “pay-to-play” politics, and good old-fashioned hard work as being key to his success.

“The money we did not have we made up for by our ideas and our push to be representatives of the community. And Run for Something is very much about that,” Lujan said. “And I am so proud to have been endorsed by an organization which recognizes our youth is so paramount to our future.”

Kelly Fowler is another Run for Something success story. Fowler, a first-time candidate for the Virginia legislature in 2017, alluded to the organization’s support in canvassing voters, digital outreach, and recruiting volunteers as having made a big difference for her campaign.

“If organizations like this team up with advocates and really work with the campaign to be effective with [nuts and bolts election] efforts, it would free up the candidate to focus on meeting voters and winning,” Fowler told WhoWhatWhy.

Déjà Vu All Over Again

While targeting millennial candidates may be the unique niche for Run for Something, the group’s commitment to compete everywhere, even in “red” states, was also implemented a dozen years earlier by then-Democratic National Committee Chairman, Howard Dean. Dean’s 50-state strategy was given partial credit for strong Democratic Party showings nationwide in 2006 and 2008.

Litman acknowledged the parallels between Run for Something’s “run everywhere” approach and Dean’s strategy, which was largely abandoned when Dean stepped down as DNC chairman in 2009. Over the years, Dean has stuck by the premise behind his original strategy.

“I don’t advocate putting a zillion dollars into Alaska, but I do advocate having a competent, well-run Democratic Party in place, because you may never know when lightning is going to strike,” Dean said. And if the most recent 2018 polls showing generic Democrats with a double-digit lead over generic Republicans hold up, then the storm clouds will be gathering for the GOP.

Litman stresses the “trickle-up” effect of running strong candidates at the local level. She cited statistics showing that in 2009 there were only eight or nine contested primary elections in Virginia and that turnout was under 240,000. By contrast, in 2017 there were 20 primary contests and voter turnout climbed to more than one million in Virginia’s June primary. Litman stated that contested elections lead to more voter contact. And more voter contact leads to higher voter turnout, benefiting Democrats up and down the ticket. 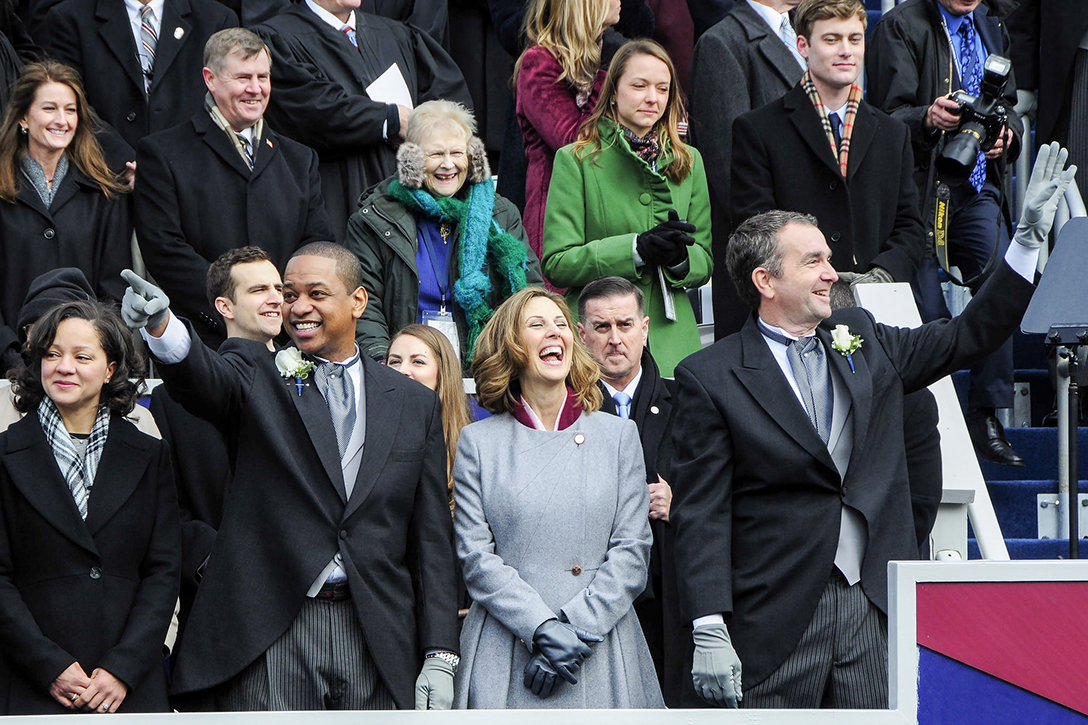 “We can’t expect people in rural areas, in red areas, to vote for our presidential candidates or our gubernatorial candidates if they’ve never seen a Democrat running for school board or county office,” said Marcel Groen, Pennsylvania Democratic chair.

Getting In On The Act

Litman’s group is not the only one seeking to bolster Democratic candidates at the state and local level. In January of 2017, Obama and Eric Holder announced an initiative to raise money for both Democratic state legislative candidates and ballot initiatives to create independent redistricting commissions. The latter is seen as a move to undercut gerrymandered districts in red states. As of December 31st, 2017, Holder’s group had raised $16.2 million. In October of 2017, the Obama-affiliated Organizing for Action announced a partnership with Holder’s organization to pool their resources for the 2018 state legislative elections and subsequent redistricting. Additionally, former Maryland Governor Martin O’Malley recently announced the formation of a PAC — Win Back Your State — designed to help down-ballot Democrats.

Lujan, the newly-elected Orange County legislator, believes that political investment in progressive youth, women, and minorities running for local offices is key to the future of the party and country.

“Invest in youth because they really are our future,” he said. “We need them to be at that table. Elizabeth Warren said if you are not at the table, you are on the menu. We don’t want to be on the menu.”

In 2018, the Democratic Legislative Campaign Committee and the National Democratic Redistricting Committee, both Democratic Party groups, plan on spending $35 and $30 million respectively on electing Democrats at the state level. The DLCC’s $35 million total nearly doubles how much the group has spent in any election cycle since 2004. A clear sign that the party and its allies are not resigned to being badly outspent and served up as hors d’oeuvres come election night 2018.

For more information on the administration of elections, the security of the vote, voter suppression, gerrymandering, money in politics, and much more, check out WhoWhatWhy’s new Election Integrity News feed.