After mass shootings or other types of terror attacks in the US, the finger-pointing begins almost immediately. One side uses the situation to advocate a change in policy while the other side laments that this is insensitive and that the immediate aftermath of such a major event should not be “politicized.” Is there a right way and time to start a national discussion?

“Usually, when politicians accuse the other party of ‘politicizing’ an event,” David Barker, professor of government (American politics) at American University, told WhoWhatWhy, “what they are really criticizing is the other party’s attempt to redress a societal woe with a policy response — which of course is exactly what democratic politics is supposed to do: we are supposed to collectively deliberate over how to deal with problems that affect us all.”

“All policy discussions are divisive in these polarized times, but they don’t have to be, and they are a byproduct of the polarization, not the cause of it.”

“The problem is that we as a society/democratic polity have come to believe that considering policy options to try to ameliorate a problem is ‘politics’ rather than democracy in action, and that such discussion of policy alternatives must necessarily be divisive,” Barker said. “All policy discussions are divisive in these polarized times, but they don’t have to be, and they are a byproduct of the polarization, not the cause of it.”

Many political scientists define politics according to the standard introduced by Harold Lasswell, a 20th century American political scientist and communications theorist. In an interview with WhoWhatWhy, Dr. Robert Y. Shapiro, professor of political science at Columbia University, summarized Lasswell’s framework as, “having to do with power relations in a society, where power is defined as A trying to get B to do something B would not otherwise do.”

Republicans seeking to postpone conversations about guns to a later time never specify when that later time may be. The discussion of immigration, on the other hand, after a terrorist attack by a foreigner, has no such limitations.

After the Las Vegas shooting in October, Rep. Peter King (R-NY) told Fox News, “I thought it was inappropriate yesterday for people in these early hours to be jumping out and raising this as an issue.” In response to the outcry for stricter gun control, King advised instead waiting a few days to “see what happens.”

King struck a different tone when commenting on the terrorist attack in New York on Halloween, telling Fox News, “As far as the vetting, I agree, we do need to have improved vetting, increased vetting,” not defining what the “extreme vetting” would entail, but implying more extensive background checks, particularly on refugees and citizens of Muslim majority nations.

“It’s just not the time to dive into the politics and try to score political points.” Chaffetz said.

He then appeared on Fox & Friends, the day after the terrorist attack on the West Side Highway in New York, saying, “this guy who committed this crime, assuming that he did commit this crime, his entire family should be deported” — again demonstrating a penchant for taking a strictly party-centric viewpoint rather than considering the general public interest.

“What they really want their intended audience to take away,” Barker said, “is some version of ‘look at those craven, crass hacks over there: they are dividing the country with politics at a time of national tragedy when we should all be coming together.’ [Politicians] do it because it works. It effectively stifles consideration of policy response to national tragedies that might enjoy popular support but are not at the top of anyone’s agenda.”

“This is why striking while the iron is hot is a good political move, and [why] ‘politicizing’ happens. After the public’s attention turns elsewhere, the opportunity may have passed.”

Hypocrisy permeates the entire political spectrum. Republicans seeking to postpone conversations about guns to a later time never specify when that later time may be. The discussion of immigration, on the other hand, after a terrorist attack by a foreigner, has no such limitations.

Senate Minority Leader Chuck Schumer (D-NY) took to the Senate floor the day after the Las Vegas shooting to address the attack. “What Congress can do — what Congress must do — is pass laws that keep our citizens safe,” Schumer said. “And that starts with laws that help prevent guns, especially the most dangerous guns, from falling into the wrong hands.” 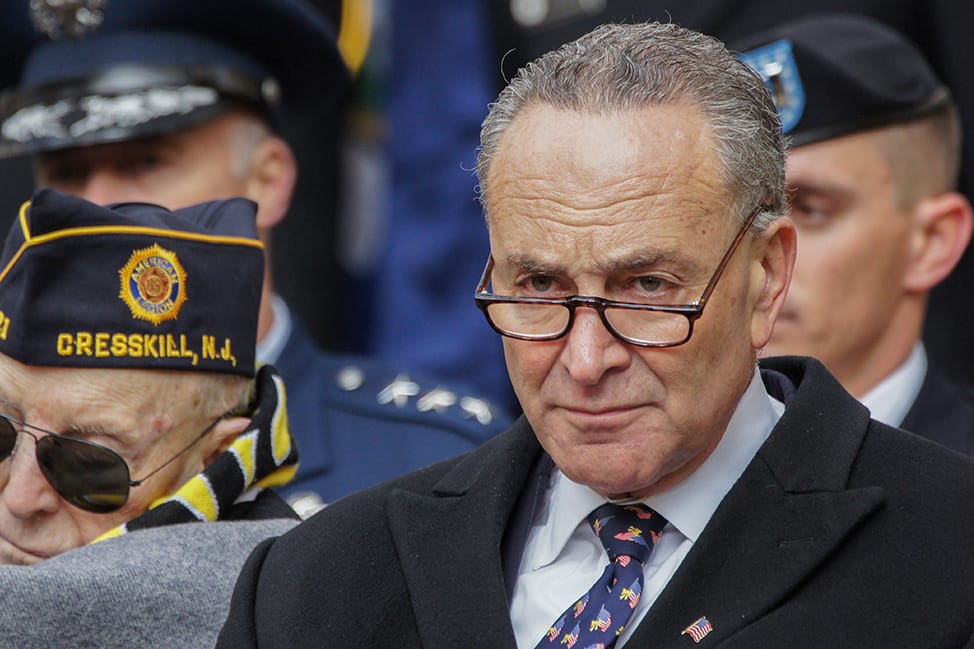 Yet, Schumer hit President Donald Trump for “politicizing” the West Side Highway terrorist attack after the president attacked Schumer for his role in creating the Diversity Visa Lottery Program — which the terrorist had used to enter the United States.

Trump also assailed the program itself and called for immigration reform. Schumer replied in a statement, saying that “Trump, instead of politicizing and dividing America, which he always seems to do at times of national tragedy, should be focusing on the real solution — anti-terrorism funding — which he proposed cutting in his most recent budget.”

For Schumer and the Democrats, the reverse was true: Only gun control, and not immigration reform, can be discussed after a tragedy.

Politicians who urge us not to “politicize” are often responding to the “power struggle” as defined by Lasswell.

“Both sides do it, but the Republicans have traditionally done it more because, ideologically, they are less interested in public policy solutions to most social ills,” Barker points out. “Conservatism, by definition, wants the federal government to be more hands-off when it comes to most domestic policy. They genuinely do not believe that such efforts help but that they tend to make things worse. Dem[ocrat]s, on the other hand, believe that that is what they are there to do — try to make things better through public action — so they are the ones in the position of calling for new government regulation or programs or whatever in response to a problem.”

A redress of grievances through a legislative response is the proper way to rectify problems affecting all of society, as envisioned in the Constitution… it is important to think of the victims in times of tragedy, but it should be “fair game” to discuss reforms after a major event if the discussion serves the purpose of finding a political solution.

Dr. Monika L. McDermott, professor of political science at Fordham University, adds that when emotions run high, it’s really hard to have a discussion on the merits of any given policy move. Public support for gun control does tend to jump immediately following mass shootings, but it typically returns to its previous level.

“This is why striking while the iron is hot is a good political move, and [why] ‘politicizing’ happens,” she said. “After the public’s attention turns elsewhere, the opportunity may have passed.”

There can be cases, however, of ugly, objectionable politicization. One of the most controversial was the 2003 invasion of Iraq. After the American public was left in shock and horror from the terrorist attacks on 9/11, the Bush administration stoked fears with unsubstantiated claims that Saddam Hussein was amassing weapons of mass destruction (WMD) to secure support for the war.

In Shapiro’s book — Selling Fear: Counterterrorism, The Media, and Public Opinion — the professor and his co-authors, Brigitte L. Nacos and Yaeli Bloch-Elkon, address how journalists at the time went from being watchdogs to lapdogs.

The press amplified manufactured fears coming from the White House rather than critically examining the disputed claims regarding WMD. In this way, the media ultimately shaped public opinion in favor of invasion. The same constellation of forces smoothed the passage of the controversial Patriot Act. Public opposition to government surveillance was at a low at that time due to post-9/11 security concerns.

“Since then, [the Patriot Act] has been roundly criticized for giving government far too much power to invade Americans’ privacy,” McDermott said. “It’s almost certain that if lawmakers had waited a little bit for things to cool down, the bill would not have gone as far as it did.”

Since its passage, the Patriot Act has been amended multiple times to protect citizens’ civil liberties, with the support of both Democrats and Republicans.

Discussions and debates, nevertheless, can provide the impetus for legislative reform. There are countless examples of policy review after citizens demand action. The Dodd-Frank Act, known formally as the Dodd-Frank Wall Street Reform and Consumer Protection Act, was introduced after public outrage over banking excesses — which contributed to the financial collapse of 2007-8 — motivated Congress to overhaul parts of the US financial regulatory system.

Another example is the Affordable Care Act (ACA), also known as ObamaCare. Before its provisions came into force in 2014, there was growing concern among citizens about rising healthcare costs, denials of insurance coverage, and higher premiums for pre-existing conditions — and a large population of uninsured, estimated to be about 44 million. Though the ACA has many unresolved problems, it has reduced the number of the uninsured by almost half. This summer, when Republicans attempted to repeal the ACA, the public backlash deterred some Republicans from voting for its repeal.

A redress of grievances through a legislative response is the proper way to rectify problems affecting all of society, as envisioned in the Constitution. And, as Shapiro stated, it is important to think of the victims in times of tragedy, but it should be “fair game” to discuss reforms after a major event if the discussion serves the purpose of finding a political solution.

If history is any guide, the next tragedy is just around the corner — along with calls for action from one side and an outcry over “politicization” from the other. In those moments, it’s important for Americans to be aware of the motivation behind each side’s posturing, and to look beyond the political gamesmanship.