This week alone, there have been so many new developments in the ongoing saga of how closely the regime of Russian President Vladimir Putin is tied to Donald Trump and his administration — including WhoWhatWhy’s own reporting — that few paid more than glancing attention to an extraordinary Senate hearing that took place Thursday.

A group of witnesses told the Senate Select Committee on Intelligence that the new US president might be Putin’s most effective weapon in what was characterized as an ongoing disinformation campaign, aimed at destabilizing both the US and Europe.

Those measures, the witnesses said, can include fake news from Russian news outlets Sputnik and RT, amplified by other sites, and disseminated by “bots” — computer programs that can generate millions of bogus tweets.

The committee heard assertions that the Russians have been engaged in these measures for many years, but that their efforts intensified during the 2016 campaign.

How effective were these disinformation tactics? The answer can be found in a poll from earlier this week on the issue of Russian meddling in the US election. In spite of affirmative assertions about that meddling , such as those at the hearing, 64% of Republicans believe there was no such interference.

One clear takeaway from the testimony at the hearing: Trump was Putin’s perfect candidate, and is possibly his perfect president.

Trump was so receptive to the stories that Putin and his legions pumped into the web that, the committee was told, Trump served, and continues to serve, as the Russian leader’s de facto megaphone.

When Sen. James Lankford (R-OK) asked Clint Watts, a former FBI agent and senior fellow at George Washington University’s Center for Cyber and Homeland Security, why Putin had been so engaged and active in the 2016 election, Watts offered a frank assessment.

“I think the answer is very simple and is what no one is saying in this room: The Commander-in-chief” has effectively used the same Russian disinformation to gain the upper hand.

As a candidate Trump “claimed the election could be rigged,” Watts said. “That was the Number One theme pushed by RT, Sputnik News … all the way up to the election. He’s made claims of voter fraud, that President Obama’s not a citizen, that [Senator] Ted Cruz is not a citizen.”

Russian influence is still being felt, Watts said, through what he called Trump’s unfounded claims of “Trump Tower being wiretapped.” 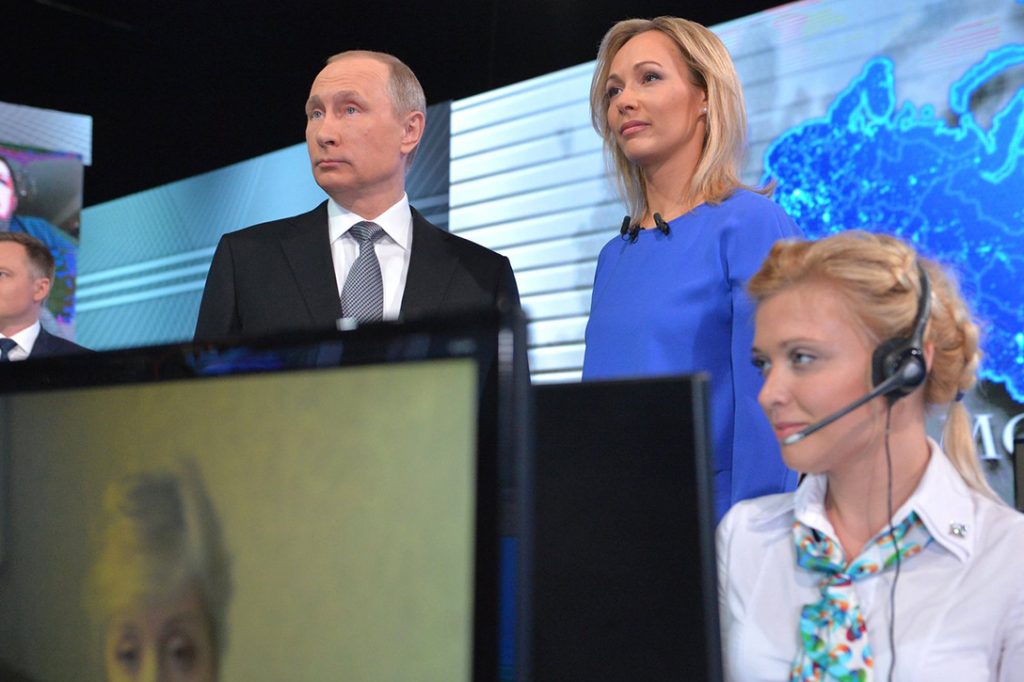 Russia and Trump “parrot the same lines,” Watts charged. “So Putin is correct. He can say that he’s not influencing anything because he’s just putting out his stance. But until we get a firm basis on fact and fiction in our own country, and get some agreement about the facts — whether it be, Do I support the intelligence community, or a story I read on my twitter feed? — we’re going to have a big problem.”

Trump is so receptive, Watts asserted, that sites purveying Russian-driven fake news “tweet at President Trump … when they know he’s online and they can push conspiracy theories.”

But Watts did not conflate Trump and the Republican Party. The Russians, he claimed, “play all sides” and “launched divisive messages on nearly any disaffected audience.… They were with Bernie Sanders supporters, trying to influence them in different directions.”

As for Russia’s policy goals, those testifying asserted that Putin both benefits from Brexit and hopes to further weaken the European Union. Trump, in fact, did support Brexit, an unusual position for a would-be American president. Similarly, he’s sent conflicting signals about his continued support for NATO, alarming European allies who had long taken American involvement for granted.

Eugene Rumer, a former intelligence officer and director of the Russia and Eurasia program at the Carnegie Endowment for International Peace, brought home the theme of the day: the “payoff” to Putin from the Trump victory. “Major political disruption in the United States, which has been distracted from many strategic pursuits;” “damaged” standing of the US and its leaders in the world; and the questioning of the US’s commitment to its allies in Europe and Asia.

Rumer added that a “common theme” of many international thought leaders is that the United States, once considered a “pillar of stability” in the world, now has been “transformed into its biggest source of instability.”

“The full extent of Russian meddling in the 2016 presidential election is not yet publicly known,” Rumer said. And he noted that Europe and the US can expect more of the same. French right-wing candidate Marine Le Pen recently met with Putin in the Kremlin, and her campaign has a loan from a Moscow-based bank, Rumer said. Russian media outlets are trying to discredit her opponent, Emmanuel Macron.

British and German intelligence services have “warned publicly” about the Russian threat to their respective democracies, he added.

In the Netherlands, whose right-wing candidate Geert Wilders is called the Dutch Donald Trump, officials were so worried about Russian attempts to hack the election, they “chose to forego reliance on certain computer vote-tabulation systems,” Rumer said. The Dutch voted on paper ballots. After polls had considered the race much tighter, with many putting Wilders in the lead, he came in second. Dutch voters reportedly had soured on Wilders’s extremist language.

However, Rumer made clear that Russia’s efforts were not going away, because Putin sees the Russian disinformation “toolkit” as one way his country can regain some of the power it lost with the collapse of the Soviet Union. “This is not a crisis,” Rumer said. “It is the new normal.”