The Feb. 22 release of thousands of pages of emails from Scott Pruitt, approved by the Senate on Feb. 17 to head the Environmental Protection Agency (EPA), only confirms what many environmentalists feared: the Trump administration will be fossil-fuel friendly to a fault.

Indeed Pruitt, formerly Oklahoma Attorney General, had views that seemed to dovetail with Trump’s ideas about the obligations of businesses to protect the environment — none.

Case in point: When the Trump Organization asked the state of South Carolina to provide millions of dollars to clean up a polluted site there once owned by the president’s son Donald Jr., it typified Trump Sr.’s attitude toward the environment: He sought to shift the responsibility onto the state. The state rejected his plea.

That scenario sets the stage for what will become the president’s positions on global warming and on the environment — that big business’s responsibility is to make money and to create jobs, and any spillovers from those pursuits are to be dealt with later, if at all.

Pruitt is pro-business and pro-energy development and, while serving as Oklahoma’s top lawyer, was a staunch advocate for oil and gas businesses in the state.

He, in fact, has sued the EPA 14 times and has been the lead attorney taking on the carbon-cutting Clean Power Plan as well as regulations dealing with ozone air pollution and the public notification of chemicals used to frack for shale gas.

His cozy relationship with energy industries is revealed in the trove of 7,500 pages of emails, released last week by the Center for Media and Democracy, which had sued the Oklahoma Attorney General’s office to get access to them. More emails are expected by March 3, unless the Oklahoma Supreme Court grants a stay request at a hearing set for today.

“I wouldn’t read too much into Pruitt’s emails; there’s no smoking gun as far as I can tell,” says Rob Barnett, an analyst with Bloomberg Intelligence. “We already knew that President Trump and Pruitt were aiming to refocus the EPA and to make it more fossil-fuel friendly.”

But now that he leads the EPA, the question is whether he can distinguish between his role as a state attorney general loyal to Oklahoma fossil fuel industries and move closer towards being a federal regulator — someone whose job it is to oversee the companies for which he once advocated.

Generally speaking, the roughly 7,500 emails only highlight what has long been suspected — that Pruitt is closely linked to the oil and gas industries in Oklahoma and that he has flexed his muscle on their behalf. It was The New York Times that originally published the story in 2014 showing that a letter from the former attorney general had been taken verbatim from an oil company that had suggested the wording.

“Thank you to your respective bosses and all they are doing to push back against President Obama’s EPA and its axis with liberal environmental groups to increase energy costs for Oklahomans and American families across the states,” says an August 2013 email by Matt Ball, an executive at Americans for Prosperity that is funded in part by Koch Industries.

To be sure, Oklahoma’s economy is dependent on oil and gas for both jobs and tax revenues. It should not come as a huge surprise that the state’s leadership is sympathetic to the issues for which it advocates. But the larger questions are whether Pruitt can extract himself from those constraints — to represent the environmental interest of the entire country, and whether Trump’s experiences with environmental regulators will weigh on the new EPA chief. 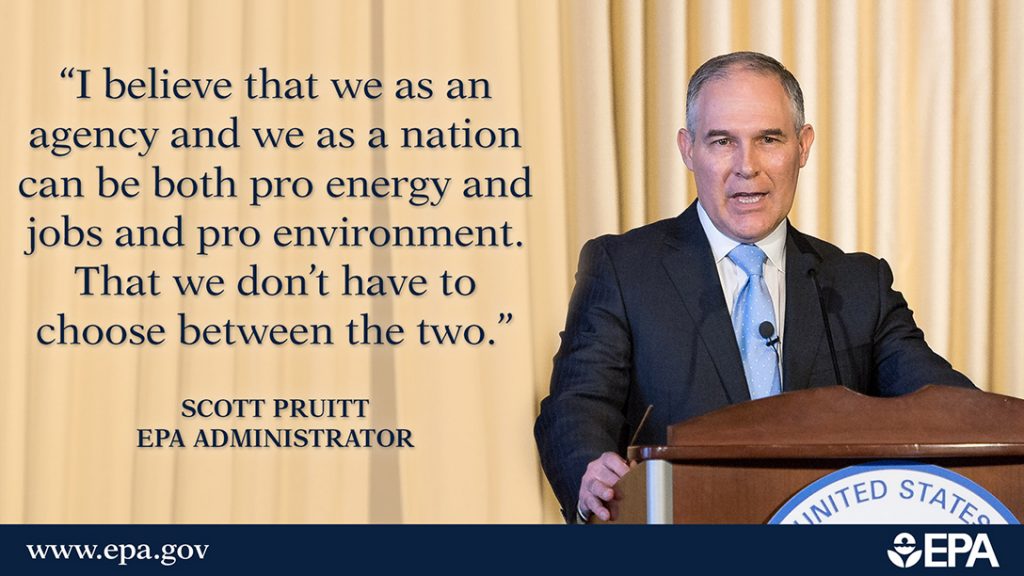 Most Senate Democrats have grave concerns about that. Even though they begged their Republican colleagues to wait and see what the emails would reveal, they failed to defeat Pruitt’s nomination on February 17.

Ditto for the Center for Media and Democracy, which sued to compel the release of the emails. The environmentalists fear that they will have no voice and that darker days lie ahead for the causes of clean air and water.

“There is no valid legal justification for the emails we received … not being released prior to Pruitt’s confirmation vote other than to evade public scrutiny,” said Arn Pearson, general counsel for Center for Media and Democracy, in a statement.

The emails show an especially close relationship between Pruitt and Devon Energy, an oil and gas developer based in Oklahoma City. Some of the emails show exchanges between the two on how the attorney general could help stave off regulations dealing with drilling on public lands and on methane gas — the most potent greenhouse gas of them all.

“Any suggestions,” says one email from a Pruitt staffer in 2013.
“Here you go,” responds Bill Whitsitt, a Devon executive, who asked the staff to look at his edits.

In a separate email, Devon Energy organized a meeting between Pruitt and members of the Federalist Society as well as a coal industry lawyer. The aim had been to create a clearinghouse to assist attorney generals in addressing issues of states rights versus federalism. The attorney general is driven to return power back to the states, which he feels are closer to the issues.

On Tuesday, in his first public statements since taking the lead at EPA, Pruitt signaled that he would be a listener — and that his role would be to create a more certain regulatory environment in which businesses could operate. The economy and the environment do not need to be at odds with one another, he proclaimed.

“Regulations ought to make things regular,” he told EPA’s staff, adding that Congress has given the states more leeway to draw their own conclusions — to engender their trust and to see the federal government as partners, not adversaries.

The voids in his logic, however, are apparent: The state regulatory bodies don’t have the muscle that the federal government has — and many states are biased toward their domestic industries, giving them greater latitude to craft the laws of those states.

Oklahoma is a case-in-point: oil and gas companies contribute to the campaigns of state legislators and office holders. And by extension, they help write the laws there — laws that may not adhere to federal standards. Witness the close interaction between Pruitt and the companies there.

And true, businesses want and need regulatory certainty, which is what the Obama administration had tried to provide. There’s no doubt that the global community is moving toward a low-carbon future — where sustainable technologies are encroaching on the turf now held by the traditional fossil fueled industries. To that end, the Clean Power Plan is attempting to make things “regular” while the Trump administration continues to lean more toward the traditional forms of energy.

It’s more than just Trump’s statement calling global warming a “Chinese hoax.” It’s also his most recent pronouncements — the ones in which his staffers have said publicly to expect some executive orders that would try to re-define the social and economic cost of carbon. Those Trump initiatives would extend to the Clean Power Plan — the Obama EPA’s proposal to reduce carbon pollution from power plants — and to the Paris Accord, an international agreement that seeks to keep global temperatures from rising more than 2 degrees Celsius by mid-century.

“I expect Pruitt will work to dismantle many of former President Obama’s climate-focused regulations, though I wouldn’t expect any immediate wins,” says Barnett, with Bloomberg Intelligence. “It’s almost certain that he’ll try to roll back the Clean Power Plan, for example, but he’s going to need cooperation from the courts or Congress to unwind most Obama-era rules.”

But he is quick to add, “I doubt the oil and gas industry will get the certainty it seeks on US biofuel policy” that is geared toward using corn-based ethanol as well as cellulosic ethanol as an additive to gasoline.

For what it is worth, the evolution toward the New Energy Economy is well underway and the Trump administration is unlikely to put a halt to that. Hundreds of businesses have implored the president to stay the course and to address global warming and the environment. At the same time, American utilities are on a path to retiring their carbon-heavy coal plants and to building newer and clean ones mostly powered by natural gas and renewables.

Just as South Carolina did not allow the president to use state funds to pay for the clean up there by a business once owned by Trump’s son, the American people and the businesses that employ them also seem determined to create a sustainable future for themselves. That’s also the constituency of both Donald Trump and Scott Pruitt. And only time will tell if they get their attention.

One response to “Can EPA Chief Scott Pruitt Surprise Everybody?”