During the Republican primary, Donald Trump “destroyed” Jeb Bush, who had entered the race as the frontrunner, by constantly ridiculing the former Florida governor and his “low energy.” But he did not destroy the continuity of the Bush Dynasty, with its endless, history-making mojo through multiple generations — and more on the way.

And now, notwithstanding the tremendous enmity between the Old Money clan and the semi-new money guy, the Bushes and their allies and fellow travelers are finding ways back inside the White House.

One example is Rex Tillerson, Trump’s choice for Secretary of State. The only reason he was even considered was because Robert Gates and Condoleezza Rice suggested him to Trump.

Gates, of course, comes out of the Bush machine, having served as CIA director under George H.W. Bush and as defense secretary under George W. Bush. Ditto Rice, who also served under Bush father and son.

Here’s what happened: Trump was muddling around, had not a clue who, or even what kind of person, he wanted. That’s why the random parade of pretty much everyone who wanted a shot, or anyone he or his inner sanctum could think of. That of course included Mitt Romney, improbably. (And a claim that, with a little classic sadism, Trump invited Romney just to dangle the prospect and ultimately reject him.) 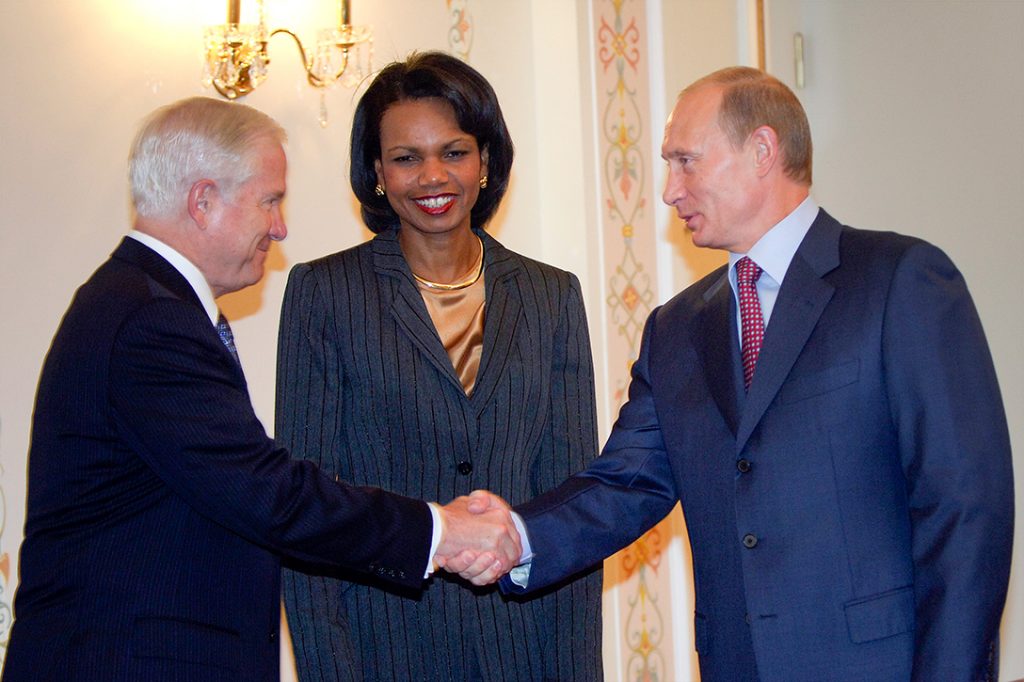 And with that, the friends of Trump’s enemy Jeb Bush were inside the tent.

It didn’t matter that Trump had spent years criticizing the neocon crew, including a speech in 2006 when he said of Rice, “…I wish she was a bitch….she goes to countries, nothing ever happens except soundbites.”

It was a quick hop to longtime Bush family consigliere James Baker and Robert Gates, and from Gates to Tillerson. The latter, it might be noted, has virtually the entire Bush gang on his corporate payroll. Even Dick Cheney seems to have signed off on all of it.

With Tillerson’s ascension, it pretty much confirms the notion of ExxonMobil as a separate “state” — big enough to act like a country. Indeed, it has virtually a parallel foreign policy and independent relations with most every nation on earth.

In that sense, one can see Trump’s move almost as annexation of sorts, though anyone can speculate about which is acquiring which.

John Fund, writing for the conservative National Review, noted that Trump didn’t do too well among the more traditional, starched-white-collar GOP element — but will need it to win re-election. Bringing in the Bush contingent is a solution. Yet he also incorrectly misses the march on Trump, and Trump’s acquiescence, writing on Dec. 18:

Trump owes next than nothing to the Bushes and has selected only one of George W. Bush’s former cabinet officials to head a department: Elaine Chao at Transportation, who also was the most conservative member of the cabinet during George W. Bush’s two terms.

In fact, it now turns out that none less than George W. Bush himself, along with — wait for it — Donald Rumsfeld, worked their influence on behalf of Tillerson, albeit indirectly.

Of course, Trump’s willingness to engage with the Bush faction is a blatant renunciation of the anti-elitist, anti-corporatist message of his campaign and a betrayal of his base.

Now, WhoWhatWhy learns that Trump adviser and controversial GOP operative Roger Stone, author of a book going after the Bushes, Jeb! And the Bush Crime Family has been pushing back.

Trump had been considering, as Deputy Secretary of State, Richard Haass, president of the old guard’s Council on Foreign Relations, and former member of both Bush administrations. But apparently Stone has convinced Trump to not appoint him.

Stone considers Haass “New World Order…Globalist…Neocon” — anathema to Stone, with his paleoconservative/libertarian inclinations. Much of Trump’s rhetoric against elites has come from Stone.

And so the battle continues to rage for the attention and favors of a man who, despite how well we know him, remains essentially a mystery. But one thing is certain: the nation’s longest running political clique has not hung up its spurs.

WhoWhatWhy Editor-in-Chief Russ Baker is the author of Family of Secrets: The Bush Dynasty, America’s Invisible Government and the Hidden History of the Last Fifty Years.