Too Many Americans Are Watching from the Sidelines - WhoWhatWhy
Reading Time: 4 minutes

This is the final part of a multi-part WhoWhatWhy election autopsy. Please go here for the first, second, third, and fourth parts.

Many of the macro trends playing out now have been decades in the making, like the uncoupling of productivity and higher wages. Since the 1970s, we saw productivity climb, even as wages declined relative to the cost of living. So, even as there was an exponential growth in productivity, workers and American households did not get a piece of the action.

As WhoWhatWhy reported for Labor Day, what workers got were ever-higher levels of household debt, which included exotic ways to borrow against the value of their home.

From the outside, it looked like the US was keeping up appearances, but the savings rate slid precipitously lower, and the household balance sheets of Americans more and more resembled the federal government’s — they were encumbered by debt.

The top line unemployment numbers are largely irrelevant to the reality on the ground. What should instead be in center focus is the labor force participation rate — the percentage of Americans working or actively looking for work. That rate has been declining for decades and even now hovers below 63%, hardly a passing grade.

There’s a hidden army of men ages 25 to 54 who are not in the workforce as chronicled in Nicholas Eberstadt’s seminal work “Men Without Work: America’s Invisible Crisis.” As Eberstadt recently observed on C-SPAN, Americans have “the most dismal record of the exit of men from the work force.”

And social mobility in the US is in steep decline. Children of wealthy parents have greater economic prospects than kids from more humble beginnings, so wealth concentration, like a centrifugal force, moves away from the center.

While some of the economic numbers could be masked to appear good, the reality looked different for an increasing number of Americans.

For decades a steady growth in workforce participation, along with increased new household formation, lifted the US into its post World War II economic expansion. But years after the Great Recession these twin engines for American prosperity are stalling out.

In 1948, 59.3% of Americans were in the labor force. That number grew, as more women joined, so that by 1997 it peaked at 67.2%. But since then, the rate has declined and is now in the low 60s, something not seen since the 1970s, suggesting that there’s something going on that’s different. 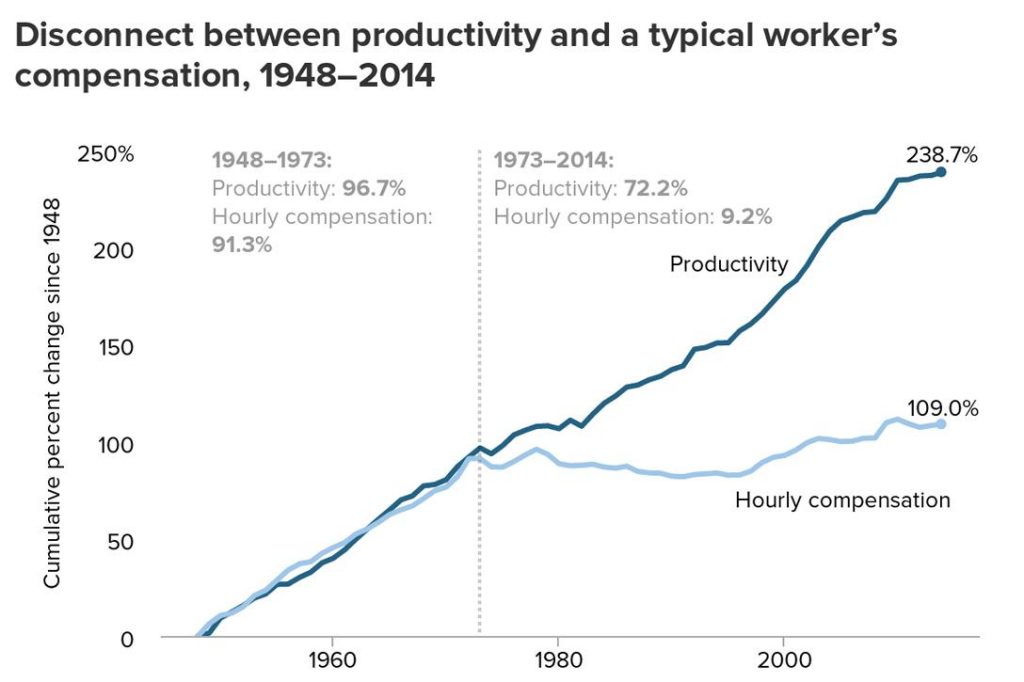 ata for average hourly compensation of private sector workers, and net productivity of the total economy. Net productivity is the growth of output of goods and services minus depreciation per hour worked. Source: EPI analysis of data from the BEA and BLS..
Photo credit: Economic Policy Institute

What accounts for this? Outsourcing? Automation? One factor, for sure, is the increase in the percentage of young people going to college. In the late 1960s just one in four opted for higher education. These days it’s closer to 40%. There’s also the aging of the population with 10,000 Americans turning 65 every day.

For decades, during the country’s war on drugs, the US came to lead the world in the percentage of  people  incarcerated. This resulted in over 2 million people in jail and not in the workforce. At the same time, the US population has become increasingly sidelined from work by disability. In 1970 just 1.7% of Americans were on disability. Today it is 5.8%.

Global multinationals figured out ways to dramatically cut their taxes by feigning not being from the United States, while also counting on US military might to keep their transnational marketplace secure. Now, as the bill comes due, they are from nowhere in particular.

And What of Tomorrow?

So, what is the status of our youngest workers? In all too many cases, they are idle. Consider that New York City has 170,000 people aged 16 to 24 who are neither in school nor working. This group is described by the Community Service Society as “disconnected youth.” That’s three Yankee Stadiums full of youth wasting and waiting.

New York City’s disconnected youth challenge has to be put in a wider national, and global, crisis context. In the United States, according to Opportunity Nation, a non-profit think tank, close to six million young people between 16 to 24 are not in school or working. With the growing mobility of capital, workers are increasingly on the losing end. The data is clear, the longer young persons remain idle, the more their lifetime potential earning power is diminished. The longer they go without work, the harder it is

for them to get the first job.

When Hillary Clinton ran on the Obama legacy, she was running on sand. All she had in her favor was that she was not Donald Trump. She had everything going for her except the arc of history, that included decades of the elites and the media ignoring the deteriorating conditions of America’s middle and lower working class, as well as a war that has no end.

Unfortunately, in our recently concluded presidential campaign, the corporate media made it all about the candidates, and precious little about the actual condition of “we, the people.”

Having so badly missed the mood of the nation, the corporate news media is trying to compensate. Post election, NBC’s Chuck Todd interviewed a journalist who covers agriculture in the heartland. Next, we had Ted Koppel in West Virginia, reporting for CBS Sunday Morning, looking like cultural anthropologist Margaret Mead.

5 responses to “Too Many Americans Are Watching from the Sidelines”