This is the fourth part of a multi-part WhoWhatWhy election autopsy. Please see here for the first, second, and third parts.

Cleveland and Philadelphia, which hosted the GOP and Democratic conventions this summer, are prime examples of the economic dislocation enduring in the US. In Philadelphia, there are 40,000 vacant lots and abandoned homes, while Cleveland has 6,000 of these zombie properties and 20,000 homes that have already been leveled because they had fallen into such disrepair.

This wasteful act, of letting perfectly good homes deteriorate to the point of ruin, is an ongoing national disgrace that is happening as rents continue to climb and homelessness is a major problem.

This was also the recovery brought to us by the Republican Congress, which hated Obama more than it loved the American people.

The news media never followed up on the failure of the so-called mortgage modifications and the outright fraud by the very same institutions that had precipitated the crisis in the first place. Consider that from 2009 through 2015, 2.2 million households applied for a trial mortgage modification, the first step to getting a permanent reset, but roughly 786,000 canceled. Of the remaining 1.4 million granted Home Affordable Modification Program (HAMP) adjustments through Treasury, some 467,000 ultimately defaulted again.

This wave of re-defaults cost taxpayers $1.8 billion dollars in TARP funds that were paid as incentives to the banks and mortgage servicers to participate in the modification program. In most states, 35 percent of homeowners could not afford the terms of their modification, setting themselves up for another default or foreclosure. In some states the default rates are running even higher: For example, it’s 44 percent in Mississippi, 42 percent in Louisiana and 40 percent in Nevada.

According to thousands of calls received by the Special Inspector General overseeing the program, the banks and mortgage-servicing companies that handled the mortgage modifications were contributing factors to the default rate. Complaints about lost paperwork and clerical errors were common. According to the Special Inspector General, so-called “dual tracking” was also an issue. That’s a practice in which the servicer of the HAMP mortgage will continue to pursue foreclosure, even while the homeowner is in the HAMP program.

“Nobody wanted to deal with the reality that these mortgage modifications were not affordable long term,” Kathleen Engel, a research professor at Suffolk University Law School in Boston, told WhoWhatWhy. “[The mortgage modifications] were all predicated on the property values appreciating in value, but they actually declined.”

The national aggregate drop in foreclosures masked troubling trends in many of the communities where property values continued to drop, pushing more families deeper underwater, according to the Haas Institute at the University of California at Berkeley. In many American cities, especially in minority neighborhoods, the number of foreclosures and abandoned homes have severely depressed real estate values since the 2008 collapse.

According to “Underwater America,” a report published by the Haas Institute, 71 of the 100 cities with the highest rate of underwater households have a population that’s more than 40 percent African American and Latino. All told, more than 10 million Americans live in one of 395 so-called “hot spot” ZIP codes, areas where between 43 percent and 76 percent of homeowners are trapped in underwater mortgages and heading for foreclosure.

A Baseball Exec Gets It

You are more likely to have noticed and really cared about what’s been happening in these American cities if you’re from one of them.

So, it fell to Baltimore native and Baltimore Orioles Vice President John P. Angelos to turn to Twitter to write the most cogent caption for his city, convulsed by civil unrest in the aftermath of Freddie Gray’s death in police custody. His social media passage laid bare how both political parties, in the service of global capital interests, consistently betrayed the national interest for their own enrichment.

“The past four-decade period during which an American political elite have shipped middle class and working class jobs away from Baltimore and cities and towns around the US to 3rd world dictatorships like China,” Angelos wrote. This, he continued sent “tens of millions of good, hard-working Americans into economic devastation” and “an ever declining standard of living and suffering.” 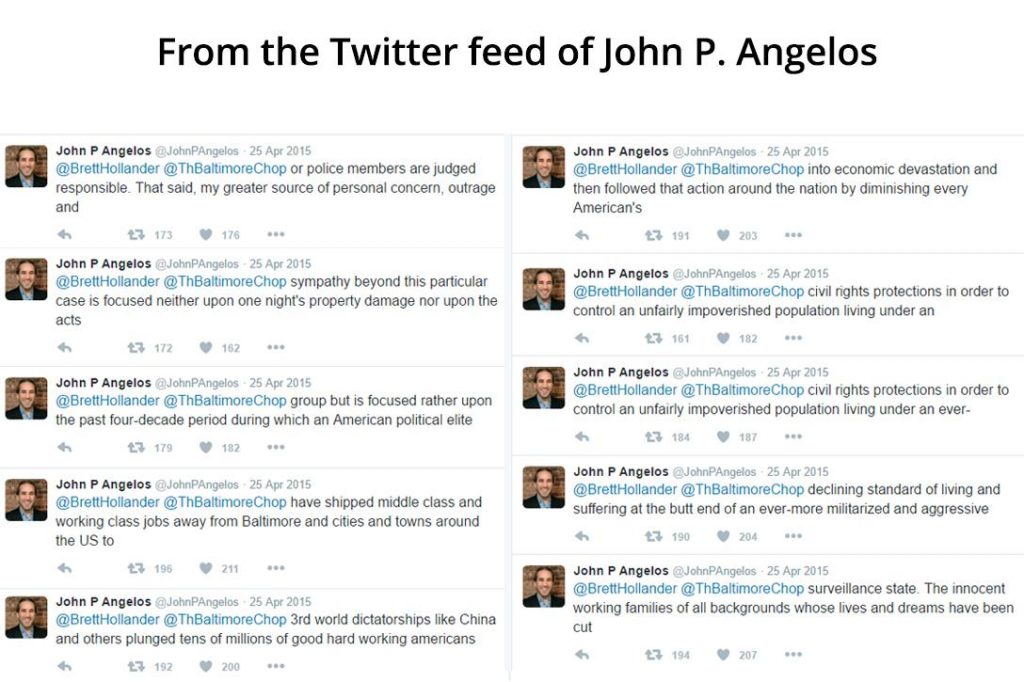 Between 2001 and 2009, the United States saw the closing down of 42,400 factories, according to The American Prospect. Of these, 36 percent of the plants had employed more than 1,000 workers. The ripple effect in those communities was significant.

In 2000, globalists predicted that granting China permanent, normal trade relations and entry into the World Trade Organization was a sure-fire winner for American workers and manufacturers. By 2010, the US trade deficit with China had soared by 173 percent, from $83 billion to $227 billion. At the same time, America lost 5.6 million jobs, more than third of all of its manufacturing employment, wages declined and income disparity continued to widen.

The North American Free Trade Agreement delivered similar dismal results. By 2012, almost 20 years after NAFTA had passed, the US had gone from having a $2.5 billion trade surplus with Mexico and a $29 billion deficit with Canada to a combined $181 billion trade deficit with both of our neighbors.

What jobs were created were non-unionized service jobs without benefits. As the factories disappeared, in places like upstate New York, the new head of household job became prison guard, as America amped up the war on drugs, and made a growth industry out of incarcerating the highest percentage of its people of any nation on earth where such statistics can be verified. This also targeted America’s urban communities of color — the Newarks, the Baltimores — the very same ones abandoned by industry.

By 2014, the US China trade imbalance had swollen to $342.6 billion. These lopsided trade imbalances have continued as the US has continued to borrow heavily to finance its governmental operations, increasingly putting the fate of our nation in the hands of foreign bondholders. And at the same time, the powers that be have neglected the nation’s urban infrastructure.

Even in 2016, Federal Reserve Chair Janet Yellen was at a loss to reconcile the steady stream of positive US economic data, like the declining unemployment rate, with 2016 polls showing that Americans remained highly concerned about the economy more than seven years after the end of the Great Recession.

As WhoWhatWhy reported earlier this year, voter concerns were totally understandable if one bothered to drill down deeper from the superficial national aggregate to a county-by-county review.

“We’re finding these national economic numbers actually mask the facts on the ground,” Emilia Istrate, director of research and outreach for the National Association of Counties (NACO), told WhoWhatWhy. “You have to look at the county level because that’s where people actually live. Each county has its own economic narrative.”

NACO tracks the economic performance of all 3,069 counties using four criteria to measure the quality of their recovery from the Great Recession. NACO monitors each county’s unemployment rate, job creation, GDP and the median home price. Only 214, or 7 percent, of the counties have experienced a recovery based on all four criteria.

Of the 126 largest counties, with more than a half-million residents, only 17 have recovered by all four indicators.”

But even aggregate county data alone won’t give you an accurate read on the level of economic hardship Americans are actually encountering locally. There is a real crisis in affordability that’s hiding in plain sight.

Consider the work of the United Way’s ALICE (Asset Limited, Income Constrained, Employed) project. ALICE tracks the growing number of Americans in several states who live above the poverty line, are working, but still struggle to cover the basics, paycheck to paycheck.

ALICE researchers identified 837,764 New Jersey households that fell into the category of living above the poverty line, but struggling to cover the basics. Adding in the 312,762 families living below the poverty line, some 37 percent of the Garden State’s households were facing economic distress on a weekly basis.

The evidence is clear and convincing that the existing, decades-old federal poverty formula is outdated, failing to account for child care, the dramatic increase in housing, nor the wide disparity in these costs between regions.

In contrast to the federal definition of poverty, the ALICE matrix includes what it costs locally to find housing, buy food, use transportation, provide child care, access health care and pay taxes. These numbers can vary widely, even within the same state. The United Way-sponsored project has now conducted comprehensive research in California, Connecticut, Florida, Indiana, Michigan, New Jersey, Idaho, Oregon and Washington. Studies are pending for Iowa and New York.

According to a six-state comparative analysis, “the growth of lower-skill jobs is projected to outpace that of medium and high-skilled jobs into the next decade in all six states” even as “at the same time cost of basic household necessities continues to rise.”

One response to “Numbers Lay Bare the Despair of Voters”