Misleading voter information, a different set of rules for independents, a lawsuit and an ultra conservative third party could all play a role in California’s crucial Democratic primary — and lead to thousands of being deprived a chance to vote. With 10 days to go before Californians cast their ballot, WhoWhatWhy looks at potential problems.

The state’s Democratic primary on June 7 is open, which means that registered Democrats and independents who register as “No Party Preference” (NPP) voters are eligible to vote.

That is good news for Bernie Sanders, who needs a massive victory in the Golden State to have any chance of matching the number of pledged delegates Hillary Clinton has won. The Vermont senator has fared much better in open primaries than closed ones, which only allow registered Democrats to vote.

However, while registered Democrats will likely experience a smooth voting process, independents will have to navigate some hurdles before they can cast their ballots.

The majority of Californians vote by mail, which is a simple process for registered Democrats, who receive ballots in the mail. NPP voters, the only other group eligible to vote in the Democratic primary, have a harder time. They must request a so-called “Democratic crossover ballot.” And the rules dictating how and when to request these ballots may not be clear to everybody.

The California Elections Code requires that printed applications for mail-in votes include information clearly telling voters that their completed application “must be received by the elections official not later than seven days prior to the date of the election…” In this case, the deadline would be Tuesday, May 31.

The law also mandates that the application must include “a conspicuously printed statement substantially similar to the following: ‘You have the legal right to mail or deliver this application directly to the local elections official of the county where you reside’.”

A lawsuit filed May 20 alleges that election officials failed to comply with the law because they sent out information that was misleading with regard to deadlines and the right of NPP voters to request a crossover ballot to participate in the Democratic primary. In addition, voters were not informed they could drop off their mail-in ballot in person.

“The polls have been open since May 9. Voters have the right to come to the polling place up to the final day of elections on June 7 and ask for the ballot of their choice,” said Bill Simpich, a civil rights attorney representing the plaintiffs. “We intend to make sure they know that this is their right.”

A pro-Sanders website has compiled images of elections materials that were sent to voters but did not comply with the California Elections Code. One of the forms, distributed by the Los Angeles County Registrar-Recorder/County Clerk, notifies voters that they have to request their crossover ballots by March 18, more than two months before the actual deadline. James Roguski, who runs that website, said he received that notification more than six weeks after the alleged deadline had already passed.

It stands to reason, and there is evidence, that a lot of NPP voters who initially read it were led to believe that they had missed their chance to vote in the Democratic primary. Mailers sent out in other counties said the deadline was on various days in mid-April. 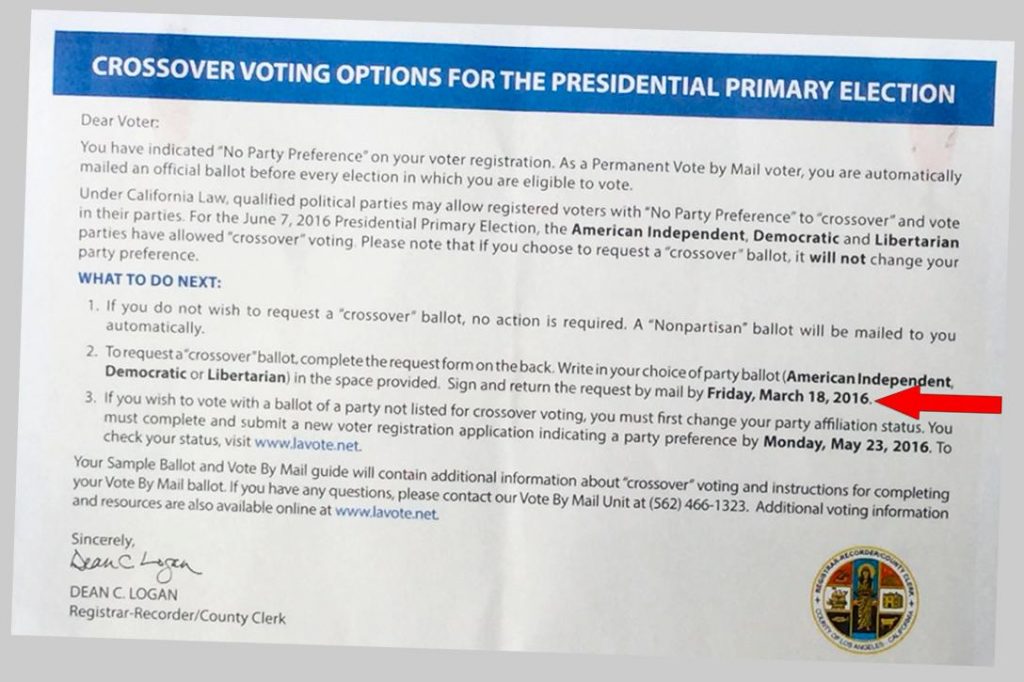 The defendants in the lawsuit are the Alameda County Registrar of Voters and the San Francisco Board of Elections, which had sent out mailers with deadlines in mid-April. Alameda County did not respond to WhoWhatWhy’s requests for comment while a San Francisco elections official referred us to the City Attorney’s Office because the inquiry involved an issue currently being litigated.

However, other election officials, whose offices were not named in the lawsuit but who had sent out information with incorrect deadlines, argued that these mailers were meant to help voters and the election agencies alike.

The Riverside County Registrar of Voters sent out a mailer to approximately 100,000 registered NPP voters indicating that the deadline to request a crossover ballot was April 22. Candice Gordon from the registrar’s office told WhoWhatWhy that this was a “soft deadline” meant to “avoid a bottleneck” at the end of the application period, which could have made it difficult to ensure every NPP voter received their crossover ballot in time.

Gordon stressed that the correct information was displayed at all times on the registrar’s official website. She noted that the phones in the office were “ringing off the hook” when the mailer was sent out and that voters who called were informed that they had until May 31 to request the crossover mail-in ballots.

Spencer pointed out that all NPP voters also received an application to get a crossover ballot on the back of their sample ballot. This document, which was provided to WhoWhatWhy, includes the correct deadline.

“The cards mailed to permanent vote by mail voters were done to comply with EC section 3205,” Sonoma County Chief Deputy Registrar of Voters Elizabeth Acosta told WhoWhatWhy. “The postcard notice both educates voters about no party preference rules in a presidential primary election, and provides them information about their options.”

Acosta pointed to the various logistics challenge as a reason for why the postcards are sent early and also noted that there is a difference between a notice and an application for a crossover ballot, which included the May 31 date for Sonoma County NPP voters.

Brenda Duran, a public information officer for the Los Angeles County Registrar-Recorder/County Clerk, also strongly rejected any claims of impropriety. Duran’s office had sent out the mailer with the March 18 deadline. She told WhoWhatWhy that this particular mailer was just one piece of a large voter education campaign meant to help spread out the applications for crossover ballots to ensure all of them would be processed in time.

Duran provided documents showing that the correct deadline had been included in subsequent documents mailed to voters, including the sample ballot for NPP voters. The registrar’s spokesperson noted that the information had also been disseminated in various ways, including the office’s website and on social media. In addition, Duran said Registrar-Recorder/County Clerk Dean Logan had done 30 print, radio and TV interviews in different languages to ensure that voters were aware of processes and deadlines.

In the counties WhoWhatWhy looked at, it seems that voters had eventually been provided with the correct information — if they read all of the mail they received from election officials closely and did not simply believe that the deadline of receiving a crossover ballot had already passed. 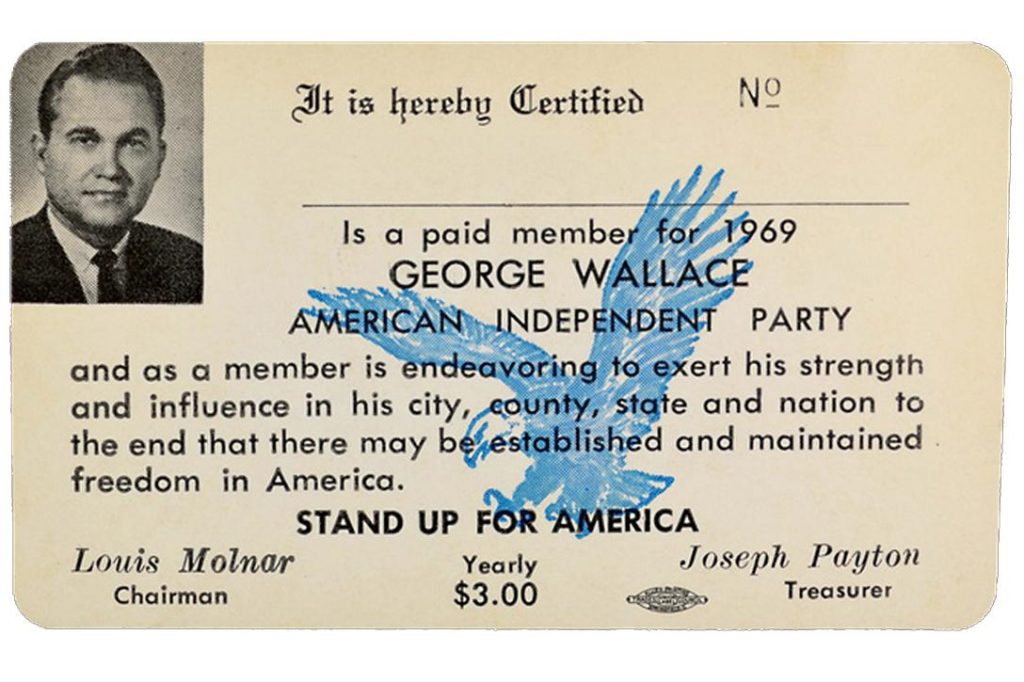 A membership card for the 1969 American Independent Party. Independent California voters may have been confused enough in their application process to have checked off the box for this ultra-conservative party. Photo credit: Unknown / Wikimedia

Another, likely much bigger, problem for Sanders — and independents wanting to vote in the Democratic primary — is the existence of the American Independent Party, an ultra-conservative party on whose ticket George Wallace once ran in California.

Voters who did not take the time to read their application thoroughly and checked “American Independent Party” because they thought that this would make them an “independent” will not be able to vote in the Democratic primary — and there are indications that this could affect tens of thousands of voters who will show up at the polls but not receive the ballot they want. The same fate may await anybody who wrote “Independent” on their registration forms.

It is interesting to note that the American Independent Party, in addition to individual voters and the Voting Rights Defense Project, a pro-Sanders group, is a plaintiff in the lawsuit referenced above. The suit seeks a judgment that state election officials violated the law by not providing the correct information. The suits asks that the correct information be made available in the two weeks leading up to the primary and that actions be taken to allow eligible NPP voters to cast their ballots in the Democratic primary even if they did not request a crossover ballot.

At press time, the Sanders campaign had not responded to inquiries as to what it had done to educate voters about the procedures once it became aware of these potential problems.

While it is too late for anybody not currently registered as Democrat or NPP to vote in the Democratic primary, those Californians who are registered as one or the other can still request their mail-in ballot until May 31. In addition, even people who applied to vote by mail have the fallback option of voting in person at any time until June 7 at their county registrar’s office or another satellite voting location. If they have already received a ballot in the mail, they should bring that along and “surrender” it. That process appears to be the safest way to ensure their vote is counted.

However, even if all Democratic and NPP voters take these steps, it appears likely that large numbers — primarily those who signed up for the American Independent Party — might show up at the polls on June 7 only to be turned away.

38 responses to “Are More Primary Problems Looming in California?”