Professor Peter Dale Scott sees what the rest of us miss. His decades-long investigation of the connections between the hugely lucrative and unstoppable global drug trade and the national security apparatus is unparalleled. The details are also highly complex and a challenge to absorb. Nevertheless, they demand our attention.

In this excerpt from his new book, Scott focuses on the troubling relationship between Ronald Reagan’s CIA director, William Casey, and BCCI, a still-mysterious “outlaw bank” with tentacles everywhere, and extensive ties to the drug economy.

Creating an International Islamist Army: Casey, BCCI, and the Creation of al-Qaeda

The other most significant case in which the CIA became a front for sanctioned violence was CIA Director William Casey’s use of the CIA in the 1980s to promote his own plans for Afghanistan. Casey’s Afghan initiatives aroused the concern of the CIA’s professional operatives and analysts, including his deputy directors, Bobby Ray Inman and John McMahon.(35) But this did not deter Casey from making high-level decisions about the Afghan campaign outside regular channels when meeting in secret with foreigners.

One man Casey dealt with in this fashion was Agha Hasan Abedi, a close adviser to General Zia of Pakistan and, more important, the head of the Bank of Credit and Commerce International (BCCI):

Abedi helped arrange Casey’s sojourns in Islamabad and met with the CIA director during visits to Washington. Typically, Abedi would stay in a hotel and Casey would go to his suite. The two men, who met intermittently over a three-year period, would spend hours talking about the war in Afghanistan, the Iran-Contra arms trades, Pakistani politics, and the situation in the Persian Gulf. (36)

Members of Senator John Kerry’s staff, who investigated this relationship, concluded that Casey in his dealings with Abedi may have been acting not as CIA director but as an adviser to President Reagan, so that his actions were“undocumented, fully deniable, and effectively irretrievable.” (37) (Casey’s dealings with BCCI may not have been at arm’s length: the weapons pipeline to Afghanistan allegedly involved funding through a BCCI affiliate in Oman, in which Casey’s close friend and business associate Bruce Rappaport had a financial interest. (38)

Unquestionably BCCI offered Casey an opportunity to conduct off-the-books operations, such as the Iran-Contra arms deal, in which BCCI was intimately involved. But the largest of these operations by far was the support to the Afghan mujahideen resistance against the Soviet invaders, where once again BCCI played a major role. Casey repeatedly held similar meetings with General Zia in Pakistan — arranged by Abedi (39) — and with Saudi intelligence chiefs Kamal Adham and Prince Turki al-Faisal (both BCCI shareholders).

As a result of such conclaves, Prince Turki distributed more than $1 billion in cash to Afghan guerrillas, which was matched by another billion from the CIA. “When the Saudis provided the funding, the administration was able to bypass Congress.” (40) Meanwhile “BCCI handled transfers of funds through its Pakistani branches and acted as a collection agency for war matériel and even for the mujahideens’ pack animals”: (41)

To access the CIA money was relatively easy. Bags of dollar bills were flown into Pakistan and handed over to Lieutenant General Akhtar Abdur Rahman, the ISI [Inter-Services Intelligence] director. Rahman banked the cash in ISI accounts held by the National Bank of Pakistan, the Pakistan-controlled Bank of Credit and Commerce International (BCCI) and the Bank of Oman (one-third owned by the BCCI).(42)

Yet there is not a word about BCCI in Ghost Wars, Steve Coll’s otherwise definitive history of the CIA’s campaign in Afghanistan. Similarly there is no mention of BCCI in Coll’s excellent book The Bin Ladens, even though he provides an extended description of how Prince Turki arranged for “transfers of government cash to Pakistan.” (43) 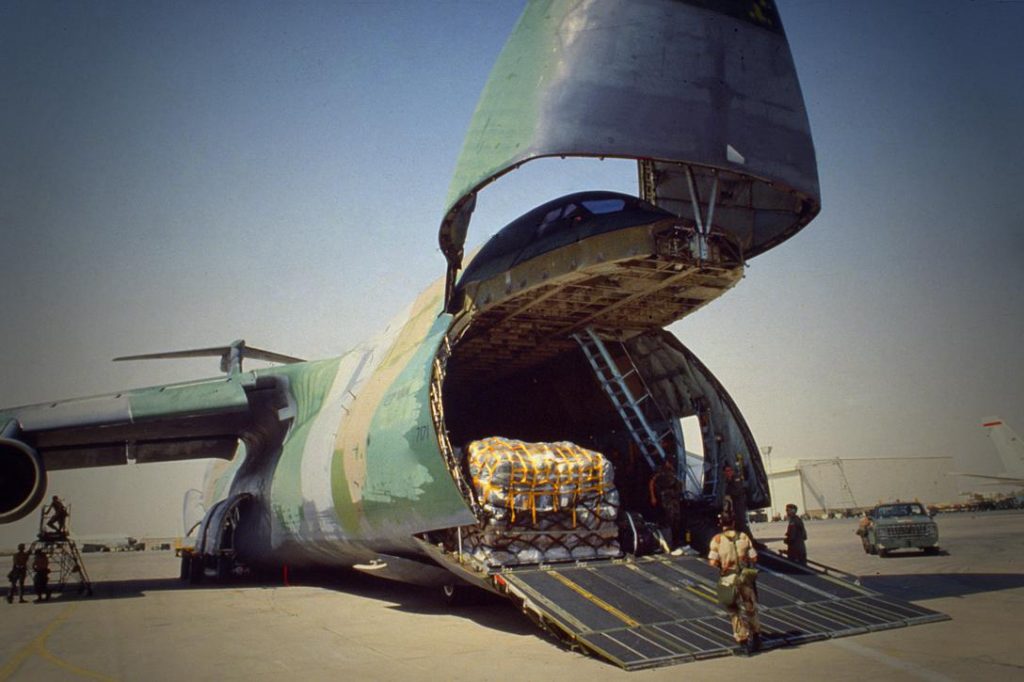 Tons of drugs and billions of dollars were moved around the world
Photo credit: Adapted by WhoWhatWhy from  (US Air Force)

Global involvement with drug shipments, smuggled gold, stolen military secrets, assassinations, bribery, extortion, covert intelligence operations, and weapons deals. These were the province of a Karachi-based cadre of bank operatives, paramilitary units, spies, and enforcers who handled BCCI’s darkest operations around the globe and trafficked in bribery and corruption. (44)

There were huge and lasting historical consequences from Casey’s apparently unilateral decision to work with BCCI. One was that BCCI’s drug clients in Pakistan and Afghanistan, notably Gulbuddin Hekmatyar, emerged in the 1980s, with protection from General Zia, as dominant figures in an expanded Afghan heroin drug traffic that continues to afflict the world. (45) (According to McCoy, BCCI “played a critical role in facilitating the movement of Pakistani heroin money that reached $4 billion by 1989, more than the country’s legal exports.”(46)

A second consequence was that many of the CIA funds intended for the Afghan mujahideen were instead siphoned off by ISI and redirected to Khan Research Laboratories (KRL) for the successful development of Pakistan’s atomic bomb. “Although the European intelligence community frequently warned of fraudulent activities between BCCI, the BCCI Foundation and KRL, the Reagan administration continually denied there was a problem.”(47)

In turn the head of the labs, Abdul Qadeer Khan, “created a vast network that has spread nuclear know-how to North Korea, Iran and Libya.”(48) In 2008 the Swiss government allegedly seized and destroyed, from the computers of just one network member, nuclear bomb blueprints and manuals on how to manufacture weapons-grade uranium for warheads, but investigators feared that these might nonetheless still be circulating on the international black market. (49)

A third consequence was that Casey could help build up the foreign legion of so-called Arab Afghans in Afghanistan, even though the CIA hierarchy in Langley rightly “thought this unwise.” (50) It was this foreign legion which in 1988 redefined itself as al-Qaeda.(51)

Such can be the consequences of ill-considered covert operations conceived by very small cabals!

US Responsibility for the Flood of Heroin in the World

Here is yet another fact that is so alien to our normal view of reality that I myself find it hard to keep in mind: US backdoor covert foreign policy has been the largest single cause of the illicit drugs flooding the world today.

The CIA’s covert operations were not the sole cause for this flood of opium and heroin. But the de facto protection conferred on sectors of the opium trade by CIA involvement is clearly a major historical factor for the world crime scourge today.

When the CIA airline CAT began its covert flights to Burma in the 1950s, the area produced about 80 tons of opium a year. In ten years’ time, production had perhaps quadrupled, and at one point during the Vietnam War the output from the Golden Triangle reached 1,200 tons a year. By 1971, there were also at least seven heroin labs in the region, one of which, close to the CIA base at Ban Houei Sai in Laos, produced an estimated 3.6 tons of heroin a year. (53)

Afghan opium production has been even more responsive to US operations in the area. It soared from 200 metric tons in 1980, the first full year of US support for the drug-trafficking mujahideen Gulbuddin Hekmatyar, to 1,980 metric tons in 1991, when both the United States and the Soviet Union agreed to terminate their aid. (54)  After 1979 Afghan opium and heroin entered the world market significantly for the first time and rose from roughly 0 to 60 percent of US consumption by 1980. (55) In Pakistan there were hardly any drug addicts in 1979; the number had risen to over 800,000 by 1992. (56)

In 2000-2001, the Taliban virtually eliminated opium production in their area of Afghanistan. Thus total production for 2001 was 185 metric tons. Nearly all of this was from the northeastern corner controlled by the drug trafficking Northern Alliance, which in that year became America’s ally in its invasion.

Once again production soared after the US invasion in 2001, in part because the United States recruited former drug traffickers as supporting assets in its assault. From 3,400 metric tons in 2002, it climbed steadily until “in 2007 Afghanistan produced an extraordinary 8,200 tons of opium (34 percent more than in 2006), becoming practically the exclusive supplier of the world’s deadliest drug (93 percent of the global opiates market).” (57)

39. In 1978, when the United States terminated economic assistance to Pakistan because of its nuclear program, Abedi had come to Zia’s rescue with emergency loans from BCCI (Truell and Gurwin, False Profits, 80–81).

44.Jonathan Beaty and S. C. Gwynne, The Outlaw Bank: A Wild Ride into the Secret Heart of BCCI (New York: Random House, 1993), 66. Those interested in BCCI should also read the defense of the bank by Abid Ullah Jan, From BCCI to ISI: The Saga of Entrapment Continues (Ottawa: Pragmatic Publications, 2006).

45. Beaty and Gwynne, The Outlaw Bank, 48–50; McCoy, The Politics of Heroin, 479–80. Fazle Haq was the governor of Pakistan’s North-West Frontier province; at the same time he was also an important CIA contact and supporter of the Afghan mujahideen, some of whom—it was no secret—were supporting themselves by major opium and heroin trafficking through the North-West Frontier province. By 1982, Fazle Haq would be listed by Interpol as an international narcotics trafficker. However, after lengthy correspondence with Fazle Haq’s son, I am persuaded that there are no known grounds to accuse Fazle Haq of having profited personally from the drug traffic. See “Clarification from Peter Dale Scott re Fazle Haq,” 911Truth.org, http://www.911truth.org/article.php?story=20090223165146219.

49. Guardian, May 31, 2008, http://www.guardian.co.uk/world/2008/may/31/nuclear.internationalcrime. According to David Albright, a former UN weapons inspector in Washington, the network member, Urs Tinner, was recruited by the CIA from 1999 to 2000 and “was on the CIA payroll for a very large sum of money.”

53. McCoy, The Politics of Heroin, 162, 191, 286–87. McCoy’s estimate of the Kuomintang’s impact on expanding production is extremely conservative. According to Bertil Lintner, the foremost authority on the Shan states of Burma, “The annual production increased from a mere 30 tons at the time of independence [1945] to 600 tons in the mid-1950s” (Bertil Lintner, “Heroin and Highland Insurgency,” in Alfred W. McCoy and Alan A. Block, War on Drugs: Studies in the Failure of US NarcoticsPolicy [Boulder, CO: Westview Press, 1992], 288). Furthermore, the Kuomintang’s exploitation of the Shan states led thousands of hill tribesmen to flee to northernThailand, where opium production also increased.

How Bribes to Politicians from Arms Dealers Keep Wars Going