I first met William Weyland Turner at a political conference, in a hotel bar in Los Angeles. He was 71, and Parkinson’s disease made his every move a staggering, slow-motion effort; walking, taking a sip of a drink, even laughing. Yet his brain remained sharp.

We bonded immediately over our distaste for our hotel. The rooms, all bad angles and David Lynch lighting, had allegedly been designed with feng shui in mind. Rooms of absurd discomfort resulted, with tiny nonsensical chairs and televisions that were propped up six inches off the ground and facing the window, as if for the benefit of local birds. The elevators were bathed in ominous red light;  when moving between floors, they produced ominous whispering rather than Muzak.

Most importantly, neither of us could turn on the overhead lights in our rooms, so we were forced to rely on the closet light for illumination. “I’m a smart guy,” Turner said. “You’re a smart guy. And we still can’t figure this out.” I ordered another $15 cocktail, unhappy about the tab but happy with the company.

William Turner – or, forever after, Bill – was in the final chapter of one hell of a life. He started off as the embodiment of one of those pragmatic, respectable, square-jawed men celebrated on mid-twentieth century American television, but wound up among hippies and conspiracy theorists. And the damndest thing about it was that the progression actually made perfect logical sense.

Born in 1927, he enrolled in the Navy at age 17, and was assigned to the Pacific shortly before the bombs were dropped in Japan. Returning home, he played semi-pro hockey, at one point flirting with the New York Rangers of the NHL.

But the FBI paid better – back then anyway. He stayed with the Bureau from 1951 to 1961, becoming increasingly dubious about its tactics and the curious obsessions of its leader, J. Edgar Hoover. When he finally left the FBI for good – he had tried to leave in 1957 but was assured that changes were in store – he didn’t go out, as he put it, with “the customary hearts and flowers routine.”[1] Instead, he decided to file suit for violations of his free speech rights, and although it was unsuccessful he did manage to get some negative assessments into the public record from other agents.

Turner had become increasingly uncomfortable with the director’s focus on rooting out a largely illusionary Communist threat, the beginnings of COINTELPRO (a program that targeted mostly black organizations, such as the Black Panthers, as well as Malcolm X and Dr. Martin Luther King), wiretapping and illegal “black-bag” jobs. In Turner’s opinion, the FBI seemed to be little more than the church of J. Edgar Hoover, which was dangerous for national security. As Turner himself jocularly relates in his autobiography:

…Hoover projected an image of perfection…An example of this is the story about the New York agents who cornered a fugitive at a subway entrance. A shootout ensued, and one agent was taken to the hospital with a leg wound. The next morning Hoover appeared with his civic group as scheduled. “Gentlemen,” he began, “I am with you this morning even though my heart is heavy, for last night in New York one of my agents was killed in a gun battle.” When the Director’s words reached New York, agents drew straws to see who would go to the hospital and finish off the wounded agent.[2]

Turner realized he was at a crossroads. He had served in the Navy and spent ten years investigating and prosecuting crime as one of Hoover’s finest. So what would he do? He would become a journalist, and not just any journalist – he would wind up as the editor of Ramparts magazine.

Along with Paul Krassner’s iconoclastic The Realist, Ramparts was one of the most radical magazines of its time: an ostensibly Catholic publication that was in practice a leftist attack on the status quo. Typical articles probed government surveillance or CIA infiltration of liberal groups. Authors included members of the Black Panther party .

In the 50s, every red-blooded American kid ran around with a Junior G-man badge; in the next decade, the FBI would be seen as yet another arm of an oppressive state. And somehow Bill Turner had moved from one to the other. It was like television star Donna Reed suddenly appearing in a West African dashiki.

The fact is, Turner had stayed true to his principles. He was a patriot, but he wasn’t a fool – and when he saw the FBI as part of the problem, he didn’t hesitate to join the other side. 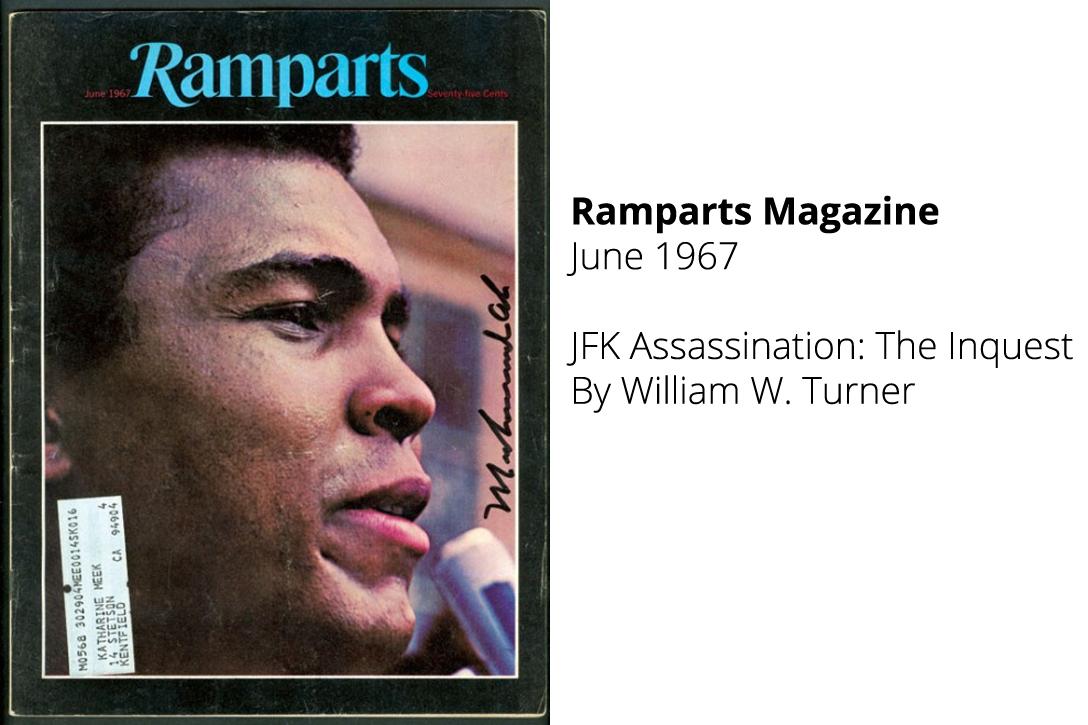 As editor of Ramparts under publisher Warren Hinckle, he produced some of the most radical writing of the period, as well as giving voice to what was labeled the New American Left. This was a reaction to the Vietnam War, the emerging surveillance state, the presidencies of Lyndon Johnson and Richard Nixon, and the major assassinations of the Sixties – John and Robert Kennedy, Dr. Martin Luther King Jr., and Malcolm X.

In many ways, Turner was ahead of his time. One example is an article he wrote in the January 1967 Ramparts about the right-wing militia called the Minutemen. In words that could scarcely be more relevant today, he berates the FBI for spending all its time chasing the ghosts of Communism when a real American threat grows within our own society – disenfranchised white men violently opposed to racial change.

The article gained credence coming from someone who had recently been involved in the very organization he now criticized. Although offended, Hoover’s outfit realized that confronting Turner was pointless. An internal FBI memo notes that “Due to Turner’s attitude toward the Bureau, it would be useless to contact him to set him straight…No further action is necessary as this article merely represents another of Turner’s attempts to smear the Bureau.”[3]

That same issue of Ramparts played an important role in history for quite another reason: it contained William Pepper’s scathing anti-war article, “The Children of Vietnam.” 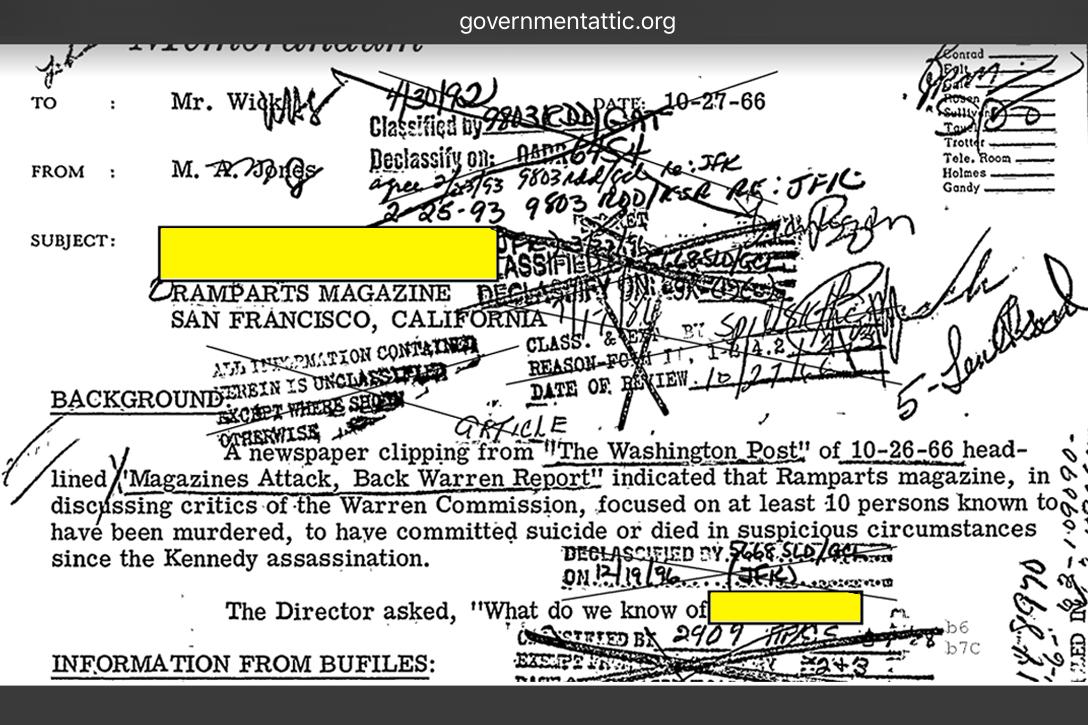 After reading Pepper’s piece, Dr. King  asked the author to speak to his Atlanta congregation. This relationship spurred the civil-rights leader to turn his attention to the Vietnam war, which he condemned in his famous April 4, 1967,speech. (King would be assassinated exactly one year after that speech.)

A key figure in this investigation, dramatized in Oliver Stone’s 1991 movie, JFK, was a New Orleans businessman and CIA contract agent named Clay Shaw, whom Garrison accused of conspiring to kill Kennedy.

Turner agreed to help Garrison, and almost a year later wrote a cover story in Ramparts: “In my opinion, there is no question they have uncovered a conspiracy.”

One aspect of the case that Ramparts magazine focused on in the early going was a cluster of mysterious deaths of people involved in some way with the assassination.

An FBI memorandum, dated 10/27/1966, notes that in previous articles the magazine “…focused on at least 10 persons known to have been murdered, to have committed suicide, or died in suspicious circumstances since the Kennedy assassination…” Then there is a space and one remark: “The Director asked, What do we know of [REDACTED].”

A most intriguing redaction.

Turner himself wrote about some of these suspicious deaths, including that of Gary Underhill. Underhill had been in military intelligence in World War II, before working for the CIA and serving as an advisor to LIFE Magazine publisher Henry Luce, who controlled the famous Zapruder film of the Kennedy assassination .[5]

Several days after the JFK assassination, Underhill told a friend that he knew a drug-running faction of the CIA had killed Kennedy, adding, ominously, “they knew that he knew.” Underhill would later be found shot dead, with a pistol under his left arm. His death was ruled a suicide, despite the fact that Underhill was right-handed.

J . Garrett Underhill had been an intelligence agent during World War II and was a recognized authority on limited warfare and small arms. A researcher and writer on military affairs, he was on a first-name basis with many of the top brass in the Pentagon. He was also on intimate terms with a number of high ranking CIA officials – he was one of the Agency’s “un-people” who performed special assignments. At one time he had been a friend of Samuel Cummings of Interarmco, the arms broker that numbers among its customers the CIA and, ironically, Klein’s Sporting Goods of Chicago, from whence the mail order Carcano allegedly was purchased by Oswald.[6]

Having spent so much time aiding Garrison on the latter’s doomed investigation of President Kennedy’s assassination — Shaw was eventually acquitted of involvement — Turner would find himself investigating the murder of another Kennedy, John’s brother Robert, shot to death in June 1968. The resulting book (written with Jonn Christian), The Assassination of Robert F. Kennedy: The Conspiracy and Coverup, continues to be one of the key volumes written on the case, along with Shane O’Sullivan’s Who Killed Bobby?

The general public is mostly unaware of the evidence for a conspiracy in the death of RFK, even though the physical evidence is easier to understand than in the JFK case. Although witnesses saw Sirhan Sirhan shoot at RFK while facing his front, the Senator’s wounds are in his back and the rear of his head, from a gun fired at point-blank range.

An astonishing story in its own right, complete with a Girl in a Polka Dot Dress, a “Walking Bible,” and mind control, the RFK assassination narrative is too complex to relate here. However, Turner and Christian must have done something right, because Random House destroyed 20,000 copies of the book rather than publish it, allegedly in response to the threat of a lawsuit by a known criminal with an FBI rap sheet.[7]

Turner would go on to write more books, including an autobiography. Although slowed in later years by his Parkinson’s, his ailments did not affect his mind. He continued to write and research, and remained as passionate as ever about exposing the truth behind government obfuscations.

I worked with him numerous times over the years, helping him deliver his speeches at the yearly Coalition on Political Assassinations (COPA) conferences, and he was always flexible, polite, and pleasant. (This may not seem like much, but when you work with dozens of remote speakers from all over the world, an affable and cooperative manner truly matters).

In a research “community” too often characterized by cut-throat competitiveness, Bill made himself a lot of friends for his gentle spirit and his kindness. His memory, as well as his work, will live on.

3 responses to “William Turner: From G-Man to Newsman”