On the eve of the 800th anniversary of the signing of the Magna Carta, an unlikely alliance of liberals and conservatives is trying to reassert a basic civil liberty that—in the name of fighting terror—has been  undermined by both Democratic and Republican administrations.

This diverse group of lawmakers, headed by Sen. Mike Lee (R-UT), want to add a provision to the National Defense Authorization Act (NDAA) that would protect Americans and legal residents from being detained indefinitely. The NDAA is currently being considered by the Senate.

A previous version of the NDAA, signed by President Barack Obama in 2011, was strongly criticized by the ACLU and others for allowing the indefinite detention of Americans. Under the Bush administration, an American citizen, Jose Padilla, detained in the United States, was also held indefinitely as an “enemy combatant.”

“The indefinite detention of a US citizen without due process is fundamentally un-American,” said Sen. Rand Paul (R-KY), a co-sponsor of the amendment and a GOP presidential aspirant. “Our founding fathers believed so firmly in the right to trial by jury that they enshrined it in the body of the Constitution, and again in the Sixth Amendment.”

The measure is also backed by Sen. Ted Cruz (R-TX), another 2016 hopeful. It is a striking reversal of the status quo, to say the least, that “liberal” Democrat Obama—who as a candidate criticized then-President George W. Bush for violating the liberties of Americans in the fight against terrorism— should now himself be on the receiving end of criticism for the same thing, and not just by liberals, but by prominent Republican candidates vying for his job.

If Sen. Marco Rubio (R-FL), a third Senate Republican running for president, does not sign on to the measure, Cruz and Paul could make it into a differentiating campaign issue that should resonate with libertarian-minded Republicans.

“The Constitution does not allow President Obama, or any president, to apprehend an American citizen, arrested on US soil, and detain these citizens indefinitely without a trial,” Cruz said, adding, “While we must vigorously protect national security by pursuing violent terrorists and preventing acts of terror, we must also ensure our most basic rights as American citizens are protected.”

“Detaining Americans captured within the United States indefinitely without trial or even charge is a clear violation of our Constitution and our values, and it must not be permitted,” Feinstein said. “We’ve seen over and over again that our criminal justice system is well-equipped to interrogate and convict terrorists, and I support that process.”

The House as the Magna Carta “Spoiler”? 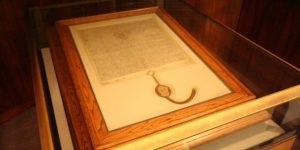 The Magna Carta first defined protection from unreasonable detention. Is that right threatened in the US under current law? Photo credit: Wongm / Wikimedia

Protection from unreasonable detention is an ancient right. It was first codified in the Magna Carta, which was signed on this day 800 years ago. For the first time in history, a monarch put his signature on a document that limited his own power—and stated that he was not above the law. About detention, Article 39 of the Magna Carta declared:

“No free man shall be seized or imprisoned, or stripped of his rights or possessions, or outlawed or exiled, or deprived of his standing in any way, nor will we proceed with force against him, or send others to do so, except by the lawful judgment of his equals or by the law of the land.”

Centuries later came another great document, one that outlined liberties for all: the Constitution of the United States of America. The protection first established in Article 39 of the Magna Carta is codified not once but twice in the Constitution, specifically in the Fifth and Fourteenth Amendments, while the Sixth Amendment gives Americans the right to a speedy trial.

Still, under the last two administrations, these and other liberties have come under attack, as Michael Ratner, president emeritus of the Center for Constitutional Rights, points out:

“What have become cornerstone freedoms derived from the Charter: due process, habeas corpus, no imprisonment without a fair trial, the prohibition on torture and no delay in the right of justice are given at best lip service while justice is denied.”

Whether justice will continue to be denied is up in the air. In 2012, the Senate passed nearly identical language with a veto-proof majority of 67 votes. However, the House of Representatives did not pass the provision, and it was not included in the final version of the bill. This time, with another presidential race but heightened public sensitivity to the dangers posed by an unrestrained security state, the House may see things differently.