In his inaugural piece for WhoWhatWhy, political reporter Jon Hecht shone a light on a problem that should be deeply disconcerting to all Americans: the Federal Election Commission (FEC)’s complete inability to enforce the few remaining campaign finance regulations still on the books.

Candidates see the loophole where undeclared candidates can do as they please, and are gleefully and blatantly violating the purpose of the laws. While “non-candidate” Jeb Bush has drawn the most attention for his behavior, he is not the only aspirant who does it. Several White House hopefuls have run de facto campaigns while waiting to announce the official start of their candidacy. This allowed them to avoid having to comply with pesky things like reporting requirements, coordination bans and contribution limits.

But despite these rule-stretching runarounds, everybody would agree that Jeb Bush, for one, is already a candidate and has been for a few months. Campaign finance experts on both sides of the aisle have stated that he is making a mockery of the process. After having referred to himself inadvertently as a candidate, Bush’s latest gem was telling Bob Schieffer of CBS that he “hopes” he would run, as though it weren’t his decision alone at this point (his family has already approved a White House run). Bush later added that he “would like to run” but hasn’t made the decision yet. I will personally eat a hat and post a video of it on this site if he decides not to run. But with Bush finally, finally expected to announce next week, I am not in active fedora-feasting preparations.

FEC Is “Worse Than Dysfunctional”

The most alarming thing isn’t that Bush and other candidates have for quite some time been flouting both the spirit and letter of the law. It is that they got and continue to get away with it—because the FEC is, according to its own chairwoman Ann Ravel, “worse than dysfunctional.”

Consider these parallels: it’s as though the EPA would just stand there while companies poured battery acid into rivers; as though the FDA would only shrug its institutional shoulders upon receiving a complaint that a pharmaceutical company is adding arsenic to its drugs.

The FEC’s dysfunction is built into its DNA: in an increasingly partisan climate, the six-member commission is divided evenly between Democrats and Republicans. Nothing will happen as long as that is the case. And it’s not as if there’s any political pressure to break the gridlock. From the point of view of the two parties, the commission might just be working best by not working at all. 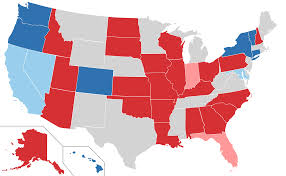 If the media only focused on declared candidates in their coverage of the lead-up to elections, underdogs playing by the rules may have more of a chance for recognition. Photo credit: Wikimedia Foundation

Of course, the law was not created for the sake of the parties, and it will not be the parties that fix it. Americans need to be so fed up with the current system that candidates who run against the status quo will be rewarded with majorities at the ballot box.

Absent that, there are some creative, proactive things that would, in a just world, be done in the short run. Independent pollsters could simply omit the names of anybody who is not a declared candidate. That would surely speed things along because it would deprive Bush and his fellow dawdlers of the spotlight that polls cast.

The media could also do its part by focusing coverage only on declared candidates. That would have the added benefit of allowing some of the lesser-known contenders to get some press.

Unfortunately, that’s all a pipe dream. It appears to be the kind of situation that will have to get a lot worse before it gets better.

One of reporter Hecht’s sources said the 2016 campaign would be like the Wild West. However, that is only partly correct. At least back then they had some sheriffs patrolling the dusty streets, firing back and firmly clamping handcuffs on the miscreants. In this election cycle, with unprecedented amounts of money being spent (mainly by a few super wealthy donors) and fewer rules to enforce than in the past, the sheriff simply cannot be found.

Even if the FEC were to rule that particular candidates violated one of the remaining laws, the fines would be so small compared to the money being raised that their impact on campaign behavior would be virtually nil.

As Hecht reported, some advocacy groups think that the Department of Justice (DOJ) is the best hope for enforcing election laws. But that is, unfortunately, doubtful. Bush and others would only cast themselves as victims of a partisan witch hunt if the Obama DOJ were to step in.

Yet this is not a partisan issue and should not be cast as such. A situation in which both frontrunners as well as most of the contenders for the Presidency are skirting, stretching or outright breaking the law—and this certainly includes Hillary Clinton’s “Emailgate”—should be deeply troubling to anyone who still believes in the democratic process as outlined in the US Constitution.