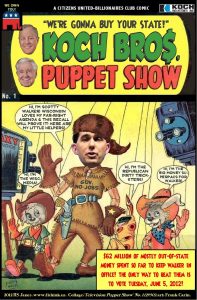 “Who do we want? Scott Walker! Why do we want him? Because we’ve filled his coffers in exchange for small government initiatives!” – say the Koch brothers, Bradley Foundation, and many others.

OK, they didn’t actually say that, but they have poured money into small-government think tanks that have, you guessed it, supported small-government Wisconsin Governor Scott Walker.  Through this “loose network” of donors, Walker has created an affluent coalition that can fund a deep run for the GOP nomination and beyond.

The New York Times has listed these money men and chronicled their influence on Walker’s political career. Below are a few highlights:

“At his side during his rapid rise was Mike Grebe, who provided crucial validation for Mr. Walker among Wisconsin Republicans skeptical that a college dropout turned career politician would become a successful and consequential governor…In the Wisconsin Legislature and as Milwaukee County executive, he always liked going to extremes and basking in his own brand of boldness. What he needed, as he climbed the political ladder, was the money and endorsements that Mr. Grebe and his conservative allies brought.”

“Americans for Prosperity, the group financed by the Kochs, started a Wisconsin chapter led by a veteran Republican operative there, Mark Block, who tapped into voters’ anger at Gov. James E. Doyle, a Democrat, and his tax and spending increases. From 2006 to 2010, the chapter grew to 100,000 members from 250 and drew huge crowds for meetings that eventually evolved into Tea Party events.”

“The Bradley Foundation gave to Americans for Prosperity but was more integral to financing two think tanks that railed against Mr. Doyle and generated policy ideas and talking points that were picked up by Wisconsin’s powerful bench of right-wing talk radio hosts. In 2009, the foundation gave a $1 million grant to one of the think tanks, the Wisconsin Policy Research Institute, to recommend policy ideas for the next governor. It also backed the MacIver Institute, providing one-third of its budget….Three weeks later, the MacIver Institute posted an opinion column that made the first public case for repealing collective bargaining to take back control of pay and benefits for public employees. MacIver’s leaders said they had not coordinated the idea with Mr. Walker or the Bradley Foundation — it just seemed obvious that everyone was moving toward a “big and bold” solution, as Mr. Walker kept putting it.”

While there are plenty of conservative think tanks around, there may not be another GOP candidate who has as many of the most powerful ones in his back pocket as Walker. That should be a major reason for concern for the other Republicans vying for the nomination.