Identifying Terrorist Enemy No. 1—the Islamic State militants—is easy now, after a spate of horrific videos of beheadings and burnings.

But what’s hard for Western governments and the mainstream media is figuring out the popularity of this terror group among young western Muslims. Why do these people choose to leave the relative comforts of home and take up arms with IS militants? It’s as if these young people are from another planet.

Even after President Obama’s three-day White House Summit on Violent Extremism, few establishment “experts” and commentators seem ready to consider one possible answer: that it is the extreme militarism of the U.S. and its allies that helped spawn IS, and al Qaeda before that.

On the PBS NewsHour segment covering the White house confab, panelists were asked “why people are drawn to the kind of extremism we are seeing today?” The assembled pundits identified “local grievances” like “access to education and job opportunities” and faulted recruiting for “extreme ideology through books and social media.”

Yet there was no mention of U.S. drone strikes, prisoner rendition, torture, and the thousands of dead and wounded Muslim civilians. All of those factors have been exploited by ISIS and other violent groups to make their case that the U.S. is waging a war on Islam. 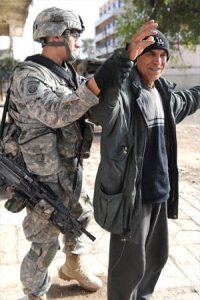 After several decades of self-proclaimed “nation building” and “exporting democracy” in the Middle East and its environs, the results are all too clear. There are shattered nations in Iraq and Afghanistan, failed states in Yemen, Libya and Syria, and more than a dozen African nations that the U.S. State Department concedes are under constant threat of attack by well-armed and organized terrorists.

Is it possible that what the U.S. has actually been doing in these hot spots is “terrorism building” and “exporting chaos”? Is this the awful truth the United States cannot bring itself to admit?

It would seem so, since instead of changing course, the U.S. is in the process of doubling down on its mistakes. How else to explain that the new GOP presidential hopeful, Jeb Bush, nonchalantly told the Chicago Council on Global Affairs that “mistakes were made” in Iraq. He then proceeded to lay out his own plan for becoming the new global sheriff in town.

Here’s a jaw-dropping statement from that speech:

There were mistakes made in Iraq, for sure. Using the intelligence capability that everybody embraced about weapons of mass destruction was not—turns out not to be accurate.

Watching his brother’s back, Jeb wove out of thin air a phony consensus that “everybody” signed on for the rationale for the Iraq war. That’s despite a vote in Congress in which 23 U.S. Senators and 133 House members opposed it.

You see, if “everybody” was wrong, then nobody was right. It should come as no surprise that Jeb’s team of policy wise men includes many Bush II veterans, among them the unrepentant Iraq war architect Paul Wolfowitz.

His Own Man, With an Old Plan

As much as Jeb Bush insists he is his own man, the audience in Chicago could hear echoes of his brother George’s cowboy-like approach. When Jeb was asked about how he would handle IS, he said he would develop a “global strategy” that would “tighten the noose” so he and the posse could “take them out.”

During Bush’s remarks, he took aim at the Obama administration for being too quick to disengage from the world and Iraq. He blamed Obama for creating a power vacuum that set the stage for the rise of IS and Iranian influence.

Yet an examination of President Obama’s new National Security Strategy, his proposed military budget and his request for his own War Powers re-authorization all indicate an administration that is prosecuting a global war on terror with unfettered latitude as to where and whom it targets.

Could it be that this “global war on terror,” whether it be the Bush 1.0 or Obama 2.0 version, may actually be what is proliferating the very thing it was aimed to eradicate?

Who is it, and whodunnit? By DonkeyHotey

One policy expert who dares to look deeper is Graham Fuller, a career CIA agent and analyst who was vice-chairman of the CIA’s National Intelligence Council. Fuller says it was the U.S. invasion of Iraq in 2003 that set the stage for IS. By creating an endemically corrupt central government in Baghdad, notes Fuller, the American occupation provided a focal point to unite disparate opposition groups. As for the high-profile effort to train a new Iraqi army, that “security” force collapsed the moment its U.S. handlers left. (In an odd twist to an already bizarre security meta-narrative, Fuller’s former son-in-law is the uncle of accused Boston Marathon Bombers Tamerlan and Dzhokhar Tsarnaev.)

In linking Washington’s Middle Eastern policies to the rise of terrorist groups in the region, MIT professor Noam Chomsky takes it even further back. He says the roots start with the U.S. support of Iraq in its brutal war with Iran in the 1980s, and include the draconian economic sanctions that followed Saddam Hussein’s 1990 invasion of Kuwait. In Chomsky’s view, these sanctions punished Iraqi civilians while reinforcing Saddam’s dictatorial control.

In his 2006 book Devil’s Game: How the U.S. Helped Unleash Fundamentalist Islam, longtime Nation correspondent Robert Dreyfuss documents how the U.S., as early as the 1950s, backed the Muslim Brotherhood in exchange for help fighting communism.

One way to justify failed policies is to pretend that they have worked as advertised. Nowhere was this disconnect between rhetoric and reality more on display than in President Obama’s updating this month of his National Security Strategy.

In presenting this new security game-plan, the president exhibited excessive confidence in declaring that the United States was heading “home” and “moving beyond” ground wars in Iraq and Afghanistan. In his mini-version of Bush’s infamous ‘Mission Accomplished’ statement, he asserted that “the threat of catastrophic attacks” against the U.S. had “diminished.”

But even as the president describes a winding-down of combat operations, anything but peace is taking hold in those places.

The sectarian violence has resulted in record numbers of civilian deaths and injuries. The UN reported last month that more than 12,000 civilians were killed in Iraq in 2014, the deadliest year for noncombatants since 2008. In Afghanistan, the UN Assistance Mission counted close to 3,200 civilians killed and more than 6,400 wounded, the deadliest year since America’s longest war started.

U.S. Marines in Fallujah. By the DOD.

Providing a sharp contrast to the president’s own assertion that peace is almost at hand, he has sent troops back into Iraq. And just a few days ago, his new Secretary of Defense, Ashton Carter, said the U.S. might end up sticking around in Afghanistan after all.

What the Administration and a cheerleading media refuse to acknowledge is that the two U.S. wars in Afghanistan and Iraq, aimed at ending terrorist threats in the region, have done the exact opposite. They not only caused tens of thousands of civilian casualties but hardened the resolve of yet another generation to seek revenge against their perceived Western oppressors.

While details of how the president plans to use his refreshed war powers are still vague, the price tag is not.

In the name of defending the country and fighting terrorism, the president’s proposed 2016 budget calls for adding $38 billion in regular defense spending and another $58 billion for so-called “Overseas Contingency Operations.” These expanded outlays would come on top of the more than half a trillion dollars the U.S. is already spending on the military.

Even under the sequester restrictions, says one specialist, U.S. military spending was already quite robust and shamefully under-scrutinized.

“If you can’t protect the nation with $500 billion dollars,” then something is amiss, according to Veronique deRugy of George Mason University’s Mercatus Center. She notes that even under the sequester restrictions, U.S. military spending was already quite robust and shamefully under-scrutinized.

The failures are especially pronounced, says deRugy, when one takes into account that in the years since 9/11, Washington’s extra expenditures, labeled “emergency” war funding, have topped Pentagon budgets by tens of billions annually.

And so under presidents from both parties, who were supposedly ‘conservative’  and ‘liberal’,  the “emergency” continues to spread.