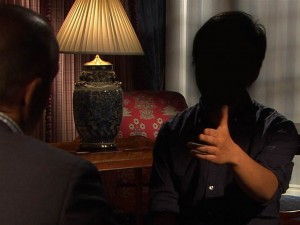 The federal government’s case in the Boston Marathon Bombing hinges on the allegation that Dzhokhar Tsarnaev was an equal to his elder brother, Tamerlan, in plotting and executing the attack.

Yet there’s a witness out there who said otherwise, and on a widely-viewed national TV broadcast at that: the still-anonymous carjacking victim “Danny.” The shadowy “Danny” told NBC interviewer Matt Lauer that Dzhokhar appeared to be a follower—an errand boy even—dominated by his older brother.

This the same “Danny” who said the brothers admitted to him that they carried out the bombing and murdered MIT cop Sean Collier. That was the crucial revelation “Danny” made that would favor the prosecution.

It is widely assumed that since the government claims to have such airtight evidence, his defense team’s best hope is to show that Dzhokhar was not a willing participant in the bombing and its aftermath. Rather, they’ll argue that he was coerced into the plot by his domineering older brother. That argument would, theoretically, help the defense avoid the death penalty for their client.

But the recent revelation that Stephen Silva, a friend of Dzhokhar who’s facing sentencing for drug and weapons charges unrelated to the bombing, struck a plea bargain means he will likely testify in the bombing trial. Silva is expected to testify that Dzhokhar procured the Ruger pistol allegedly used to kill Officer Collier, thereby undermining Tsarnaev’s defense.

The importance of Silva’s testimony to the prosecution’s case was made apparent soon after his arrest this past summer. That’s when a high-ranking law-enforcement official anonymously told ABC News that proving Dzhokhar procured the weapon undermines any notion that he was an unwilling participant. It proved, the official said, that he played an active role in the conspiracy:

The defense is trying to paint Tamerlan as the mastermind, but they were working in concert and we have evidence that Dzhokhar secured the weapon.

But not long after the bombings, “Danny” painted Dzhokhar as the errand boy of his brother:

Matt Lauer: Did you get a sense, from the way they interacted with each other, that they were equals?

Matt Lauer: Why do you say that?

Danny: Because… Jahar, he went out to the ATM. He went out to get the gas. Tamerlan never get out of the car.

Matt Lauer: So, he was the guy doing the errands.

None of this to say that “Danny” was telling Lauer the truth. He may not have been. An exclusive WhoWhatWhy investigation into “Danny” uncovered massive questions about his credibility. He has told multiple contradictory stories about the time he spent with the Tsarnaev brothers during the carjacking.

Nonetheless, “Danny’s” story about Dzhokhar’s relationship with his brother is one the defense may want to put in front of the jury. There is little risk to their case in doing so during the second phase of the trial, where the jury will decide what punishment to give Dzhokhar Tsarnaev.

It will be interesting to see exactly how the government handles this a man who, at first, looked like he might be a slam-dunk witness for the prosecution. With Silva firmly under their control and linking Dzhokhar to the crime, it may be that prosecutors will decide that “Danny” is too risky to expose to cross-examination.

Will the mysterious “Danny” even testify? And if so, will it be for the defense?

For a selection of essential stories that will bring you up to speed about the ongoing trial of Dzhokhar Tsarnaev, please click here.

There are 24 comments Our Comment Policy: Keep it civilized, keep it relevant, keep it clear, keep it short. Please do not post links or promotional material. We reserve the right to edit and to delete comments where necessary.