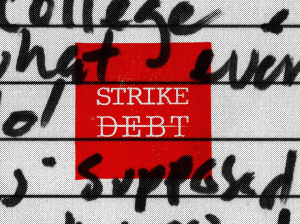 If you were counting the Occupy Wall Street movement out of the game of tackling America’s moneyed interests, there are 2,671 people today who can tell you otherwise.

That’s the number of people whose higher education debt just disappeared, thanks to a program by an Occupy offshoot called Rolling Jubilee. The group bought up nearly $3.8 million in defaulted student loans from creditors.

Instead of trying to recover the money, Rolling Jubilee just forgave the debts and announced it to coincide with the third anniversary of the Occupy movement.

The amount Rolling Jubilee abolished is dwarfed by the $1.2 trillion in outstanding student loans, but it’s a symbolic gesture in keeping with the Occupy movement’s tenets of fighting the system. And it’s designed to shed light on what could be yet another economic bubble waiting to burst.

The incredible availability of loans guaranteed by the federal government allows colleges to continually increase tuition at a rate significantly higher than inflation. Mix this with the increasing necessity of a college degree to earn a living wage, and you have a pretty volatile brew.

It’s not the first kind of debt Rolling Jubilee has tackled. Last year, it targeted medical debt and wiped out about $15 million of it. Rolling Jubilee is a project of the Occupy movement’s Strike Debt offshoot.

When dealing with medical debt, the Rolling Jubilee was able to take advantage of the shadowy world of secondary debt markets and buy large amounts for pennies on the dollar.

Here’s how the system normally works: the original lenders sell off debt owed to them. The buyers pay for it at a discounted rate based on how likely the debt is to be paid back. The new owners then try to collect the full amount.

Ordinary debt collectors profit when they collect more than they paid for the debt. But Rolling Jubilee looks at the low cost of the debt as an opportunity to annul millions on the cheap.

Student debt, however, is a different story. Most of it is guaranteed by the federal government and therefore not available on the secondary market. So instead, the Rolling Jubilee bought debts owed to for-profit colleges.

In this case, it was the debt of students at Everest College, part of Corinthian Colleges, Inc.

The company, which runs a nationwide network of for-profit colleges, is facing a host of investigations from state and federal authorities, as well as lawsuits. The allegations include, among other things, the use of deceptive marketing tactics to bait unemployed and poor people to enroll and sign up for the maximum amount of federal student loans.

What’s the catch? There is very little thought given to how such students will be able to pay their loans back.

Alarmed by predatory trends in for-profit colleges, Senator Tom Harkin led an investigation on Corinthian Colleges and others. His report states that at Corinthian Colleges, “recruiters are trained to discourage and deflect questions about cost from students.”

Here’s part of a recruiter’s script excerpted in the report:

“John, the cost of the program will vary depending on several factors. Is your question really how much is it going to cost you in out-of-pocket dollars? (Response). In order for me to answer the question, first we would have to determine the right program for you. Second, we would have to determine what time-frame you expect to complete the program (only true if credit hour charging is used); and finally, the Student Finance office would determine the types of financial assistance you may be eligible for. Could you tell me why you are asking about the cost?” (Proceed with phone script).”

Would you be surprised to know that Corinthian Colleges, Inc.’s student default rates are significantly above the national average? 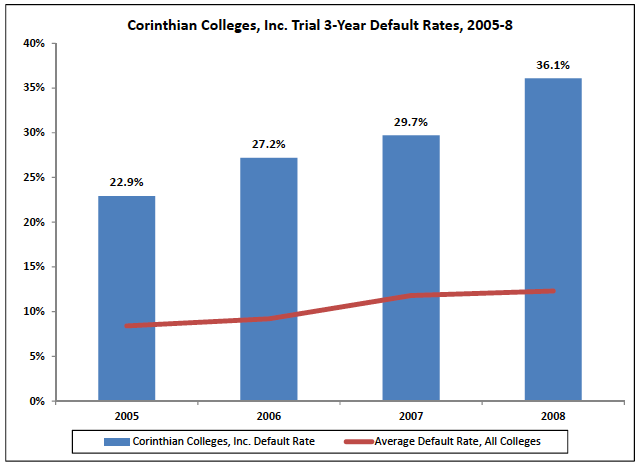 Students at Everest College have an even higher rate. In 2008, the default rate was an astronomical 54.5 percent.

Everest College’s extreme example highlights a problem that is plaguing the American higher education system overall. Colleges charge exorbitant tuitions knowing that the students have access to large amounts of credit. The schools get paid, but the students are left in debt, and the government is saddled with the burden of collection.

An equation like this means that tuition increases are unlikely to slow down anytime soon.

Although there is now federal and state scrutiny into the problem, the one Congressional bill that could ease some of the burden got blocked for a second time this year. Republican Sen. John Cornyn stopped The Bank on Students Emergency Loan Refinancing Act from coming to a vote. If passed, the bill would allow more than 25 million people to refinance their student loans at lower interest rates.

There is a bigger systemic problem, though.

U.S. universities have access to detailed records of their student’s financial situation in the form of the federal financial aid forms, and can easily see when students will have to take on excessive amounts of debt. Yet there is no incentive for the financial aid offices to turn away potential money, since the costs of debt and default are not felt on their end.

So the question is: are students to be blamed for taking on enormous loans when college looks like their best chance at decent employment?