Crime's Down, So Why is Police Aggression Increasing? - WhoWhatWhy
Reading Time: 6 minutes 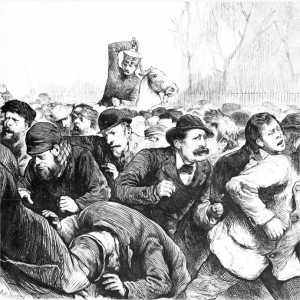 You might not know it from watching TV news, but FBI statistics show that crime in the U.S.—including violent crime—has been trending steadily downward for years, falling 19% between 1987 and 2011. The job of being a police officer has become safer too, as the number of police killed by gunfire plunged to 33 last year, down 50% from 2012, to its lowest level since, wait for it, 1887, a time when the population was 75% lower than it is today.

So why are we seeing an ever increasing militarization of policing across the country?

Given the good news on crime, what are we to make of a report by the Justice Policy Institute, a not-for-profit justice reform group, showing that state and local spending on police has soared from $40 billion in 1982 to more than $100 billion in 2012. Adding in federal spending on law enforcement, including the FBI, Alcohol, Tobacco and Firearms, the Drug Enforcement Agency and much of the Homeland Security Department budget, as well as federal grants to state and local law enforcement more than doubles that total. A lot of that money is simply pay and benefits. The federal Bureau of Justice Statistics reports that the ranks of state and local law enforcement personnel alone swelled from 603,000 to 794,000 between 1992 and 2010. That’s about two-thirds as many men and women as the entire active-duty US military.

What these statistics make clear is that policing in America is ramping up even as the crime rate is falling.

To the advocates of militarized policing, this just proves that more and better-armed cops are the answer to keeping the peace. But former corrections officer Ted Kirkpatrick, like many experts in the field, warns against jumping to this conclusion: “Police will of course say crime is down because of them,” he tells WhoWhatWhy, “but they have a vested interest in saying that.”

Kirkpatrick has the credentials and training to look beyond statistics and simplistic answers to the underlying social forces at work here. In addition to his years of law enforcement experience, he is a homicide expert in the Department of Clinical Sociology at the University of New Hampshire, and Co-Director of the university’s Justiceworks program, a think-tank specializing in law enforcement and justice issues.

“When something goes sour, like an increase in crime,” Kirkpatrick says, “everyone looks for a way to explain why. Yet when things go well, like this long-term fall in the crime rate, nobody bothers to look at why.”

Militarized “pro-active” policing may have had some effect on the drop in crimes in the US. But Kirkpatrick says, “I don’t think it’s the big thing.” Crime is down even in many cities where police forces have been cut for budget reasons, and experts agree that the decline in crime began before the militarization of policing really started to take off.

Other factors likely play a bigger role. One is increased immigration since, contrary to common belief, communities with greater numbers of immigrant families show the biggest drops in crime thanks to those families’ “stronger social fabric.” Another factor is an aging population—older people commit fewer violent crimes.

So what’s behind the push to put more police on our streets, with ever more impressive military equipment, while training them to behave like occupying troops in Iraq or Afghanistan?

One might assume that the militarization of American law enforcement began after the national trauma of 9/11. But, in fact, its roots go back decades earlier, when media stories in the 1970s created the impression that the nation was awash in illegal drugs.

An aroused Congress passed a “no-knock” law in 1970. The law allowed police to conduct drug searches and arrests by entering homes without first presenting a warrant. President Nixon’s declaration of his War on Drugs a year later led to an exponential increase in warrantless drug searches, with an inevitable emphasis on military-style policing.

SWAT team actions soared from hundreds annually in the 1970s to thousands a year in the ‘80s to 40,000 a year by 2005, according to a report by the libertarian CATO institute. The author of that report, and academic experts studying the issue, now estimate there may have been as many as 70,000-80,000 such raids in 2013 alone. Hard figures are not available: the Justice Department does not keep records on SWAT-team usage. 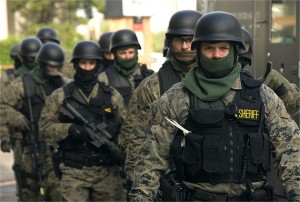 On top of the increase triggered by Nixon’s War on Drugs, President George W. Bush’s War on Terror in aftermath of 9/11 gave a dramatic boost to the militarization of American police forces.

“There has been a clear escalation of violence by police, particularly since 9/11,” says Brigitt Keller, who heads up the National Police Accountability Project of the National Lawyers Guild. “The willingness of police to use very harsh measures against people has definitely increased.”

A big part of the problem, she says, is that these days “officer safety” is given primacy over “protect and serve.” A case in point: a South Carolina sheriff’s deputy in February shot and seriously injured a 70-year-old man at a traffic stop when the man tried to retrieve his cane from the back of his pick-up truck. The Sheriff’s Department said the deputy acted “appropriately,” as he had “a legitimate fear” that the cane might have been a long rifle.

In another recent example, New York City police shot and injured an unarmed man who was acting “erratically” in Times Square. The officers were exonerated, while the man they shot was charged with causing injury to several bystanders—who were hit by the police officers’ stray bullets.

“I’m all for police officers not getting hurt on the job,” says the Lawyers Guild’s Keller, “but if you make that your first concern, then it’s problematic, because you allow the use of deadly or excessive force in practically every situation between an officer and a citizen, and you end up with citizens getting hurt.”

In fact, while being a police officer has been getting less dangerous, killings committed by police have been rising despite the drop in police who are killed.

The numbers are eye opening. The Justice Department, which keeps all kinds of statistics on violent crime, does not tally up individuals killed annually by police. But by combing public news reports and other sources, the Justice Policy Institute has estimated that police officers in the U.S. killed 587 people in 2012 alone. Over the course of a decade, they’ve tallied more than 5,000 people in the U.S. during that period—far more than the number of people who lost their lives in acts officially classified as terrorism in roughly the same span.

The many instances of deadly police violence captured on video give a visceral reality to these statistics. They show police beating and sometimes needlessly shooting citizens—even those with their hands up or armed only with a knife or stick while standing too far from responding officers to pose a threat.

In some jurisdictions, police have responded to these damaging videos by routinely confiscating bystanders’ cell phones and threatening witnesses with arrest, even though federal courts have consistently held that citizens have a right to photograph and videotape officers engaged in police actions.

The National Police Accountability Project’s Keller suggests that, along with the public’s acceptance of military-style policing, the killing of civilians has become more acceptable too. Police are rarely punished for killing people—even those who were unarmed or already restrained—because in most communities, police shootings are investigated by the police themselves, or by a closely-allied district attorney’s office. Indeed, about 95 percent of police shootings end up being ruled “justified,” a statistic that hasn’t changed as the body count has risen.

“I think when non-targeted individuals are killed in a raid, or when a person is shot in the course of a routine traffic stop, it’s seen as a kind of ‘collateral damage,’” Keller says, “instead of as some tragic or criminal use of excessive force by police.”

Public indifference to “civilian” casualties in police actions highlights a disconnect: The public perceives rampant crime while the actual crime report suggests nothing of the sort.

This fundamental misapprehension seems to be fueling the continuing political push for more police and tougher policing. While the militarization of law enforcement has little or no relation to the falling crime rate, there is reason to fear that it is eroding our constitutionally protected rights under the First, Fourth and Fifth Amendments in the Constitution’s Bill of Rights.

“I’m not sure that spending money on more police, on Kevlar suits and on things like armored vehicles is the most efficient thing to do,” says UNH’s Kirkpatrick. “It might be better to spend it on Big Brother/Big Sister-type programs and other kinds of services for kids. The trouble is, we generally implement public policy based on sentiment, not logic or statistics, and thanks to the 24-hour news cycle and its really quite dramatic reports on crimes, the average Joe or Jane thinks that things have gone nuts.”