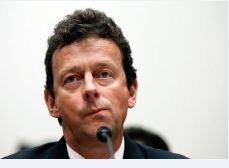 One great thing about the New York Times is that it serves up fabulous artifacts for others to mine. Such is the case with a strange, strange article about the return of Tony Hayward, the former BP executive vilified for his role in destroying whole swathes of the Gulf of Mexico…perhaps forever.

BP appears to be trying to get away with a comparatively small fine (given the recklessness and consequences), based in part on a formula tying penalties to the amount of spilled oil collected, a number reduced by use of a highly toxic dispersant that broke the oil up into largely invisible micro-droplets. Fishermen, overwhelmed with health problems believed related to the covert aerial spraying of dispersants, are beset by illness, and when they can work, are catching shrimp born with no eyes. (For more on that, see the documentary, “The Big Fix.”

Now, Hayward is back in the game, as described in the Times article:

Two years after being shown the door at BP, in one of the most ignominious corporate exits in recent memory, Mr. Hayward is back in the oil game. Not at an oil major like BP nor, for that matter, in the gulf, where oil rigs and refineries were being tested anew last week, this time by Hurricane Isaac. No, Tony Hayward is hoping to strike it rich in, of all places, the oil fields of northern Iraq.

He has some deep pockets behind him. They include a scion of the Rothschild banking dynasty, a former dealmaker at Goldman Sachs and two Turkish tycoons with a foothold in the wild and wildly contentious world of Iraqi oil. It’s a dangerous game, financially and otherwise. But despite sectarian bombings and political deadlock, Iraq’s crude oil production is soaring. In July, the nation produced more than three million barrels of oil a day, the most in a decade, eclipsing Iran and shaking up the old order in OPEC.

Yet oil has also brought its share of problems in Iraq, breeding corruption and aggravating tensions with the Kurdish minority in the north. And Kurdistan is precisely where Mr. Hayward and his partners are making their play.

The Kurdish region has vast, virtually untapped reserves, and its oil minister is carrying out plans to export oil and gas directly to Turkey, just to the north. But Baghdad’s central government maintains that it alone has the right to negotiate contracts and exports. The rivalry between Baghdad and Erbil, the capital of Iraqi Kurdistan, has nerves on edge throughout the region.

Here are some thoughts that occurred to me while reading the article:

-Hayward and friends can make a play in Kurdistan because it is considered a safe bet. Why? Because the US military will protect investments there. Evidence can be found in our story about a little-known entity, the American University of Iraq, which is located in Kurdistan. It is run by an odd circle of tin-eared neocons, funded and backed by Kurds who have been enriched by developments, but it presents an ideal, Grenada-like opportunity for US troops to swoop in and “rescue” American citizens (and knock out trouble-makers) should a delicate situation arise. It can hardly be a coincidence that this improbable squad chose Kurdistan for their early and improbable effort to help Iraqis, shortly after the invasion.

-Wealthy Turks are horning in on the Iraq oil situation. Could the desire to evict the Assad regime and install a Western-friendly regime, with the likely military bases there, be driven, in part, by a desire to keep watch over those valuable oil properties in Iraq? Turkey, a Muslim country, would be hard pressed to invade Iraq every time those oil installations are threatened. But no such thing with bases staffed by Westerners next door in Syria. Get it? Everybody wins! (well, maybe not everybody)

-A Rothschild, one of the world’s richest people, is entirely unembarrassed to be investing in the guy who presided over such a human catastrophe. Nathaniel Rothschild, who also shows up at fundraisers for good causes like African micro-finance and on the international advisory council of America’s pre-eminent think tank, the Brookings Institution, is not likely to be denied any dinner party invitations over the matter. Now, some of those who believe the world is rigidly controlled by this or that particular cabal, favor (with hints of anti-Semitism) the Rothschild clan as the one to watch. But this latest move by a scion suggests instead a clumsy and unnecessarily reckless indifference to taste while pursuing investments, behavior that can be found equally among more ordinary mortals. When it comes to making a buck, we are all (or at least many of us) Nathaniel Rothschild.

-The Times piece quotes a guy from the investment house Schroders, being extremely kind to Hayward:

“I think he probably got a bad press,” Richard Buxton, a portfolio manager at the big British asset management firm Schroders, says of Mr. Hayward.

“In a way he has something to prove,” Mr. Buxton continues. “From an investor’s point of view, that is not a bad thing.”

What’s missing is any sense of what Schroders (sometimes spelled Schroeders) itself has represented historically.  Its interests were at one time handled by the attorney Allen Dulles, who went on to run the CIA through spectacular meddling worldwide (and coups in Iran and elsewhere) for control of oil and other resources. If there were in fact a global cabal, it would most likely include blue-blood outfits like Schroders and the related ventures and family members, who have managed to show up over the years in everything from financing Adolf Hitler to building the modern Saudi Arabia to innumerable Bush family financial ventures (as I discovered while researching my book, Family of Secrets.)

-what really happened in the Gulf of Mexico, and why

-whether there was a cover-up, and a secret deal by the administration

-how bad the damage really was—and is

-what the consequences are for our health and lives, and our food supply

-whether Tony Hayward was really the prime bad actor, or a fall guy for more wealthy and powerful individuals

Then please sign up as a monthly sustainer of our work. And if you, or anyone you know, is blessed with exceptionally good financial fortune and would like to help us get to another level and hire the reporters to dig out all of this crucial information, please write directly to me via our website.