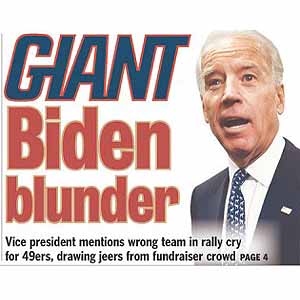 As you probably know, the other day, Vice President Biden got in a bit of trouble—again. Speaking to an audience in southern Virginia that included hundreds of blacks, he said:

Look at what they [Republicans] value, and look at their budget. And look what they’re proposing. [Romney] said in the first 100 days, he’s going to let the big banks write their own rules — unchain Wall Street.

And then came the punch line…

“They’re going to put y’all back in chains.”

The reaction was immediate—and huge. Biden’s oopsies are as popular as Dan Quayle’s two decades earlier. The media (including the influential Jon Stewart) had a field day with this remark, in part because any kind of perceived misstatement by a famous person tends to get a rise out of the public and is a sort of welcome, effortless freebie.

With the vice president’s latest, reactions varied. Some treated it as yet another gaffe by a famously gaffe-prone vice president. Others saw it as a deliberate if crude effort by Biden to fight his way back into the public eye just when the media was focusing all attention on his “opponent,” Romney’s newly announced running mate, Paul Ryan.

The GOP, including Sarah Palin as well as reliably supportive Fox News, however, tried to blame it on the Obama administration.

Here’s Mitt Romney: “The White House sinks a little bit lower,” he said. “This is what an angry and desperate presidency looks like.”

Democrats and their own media allies attacked the Republicans for trying to make something out of it, and for trying to tie it to Obama.

But Obama did not actually disassociate himself from the remarks. He insisted the racial angle was accidental—and the comments legitimate. In an interview with (appropriately enough) the program “Entertainment Tonight,” the president said:

“We don’t spend a lot of time worrying about the chatter and the noise and this and that. The country isn’t as divided with gaffes or some stray remark as Washington is. Most folks know that’s just sort of a WWF wrestling part of politics. It doesn’t mean anything, just fills up a lot of air time.”

And he explained in another interview (again, appropriately enough) with People magazine, that Biden was talking strictly about how consumers would suffer under GOP administration.

In no sense was he trying to connote something other than that.

There is no question that Joseph Biden has a long history of putting his foot in his mouth. But the mere expectation that everything he says is accidental or ill-conceived also puts him in a good position to put out material that actually helps Obama. And it is not as if Biden is completely incapable of memorizing his lines—or at least reading them off a teleprompter.

Maybe these most recent remarks were mistakes. But mistakes tend to come in debates, in response to questions, not in prepared speeches. And these seem to have been prepared remarks, a carefully calculated effort, as with all good speeches, to  create some theatre—and to include at least one “hot” phrase that will get picked up by the electronic media. There is simply no point to having Biden speak to a live audience without considering how to multiply the ultimate audience by a factor of thousands.  And no point to having him speak at all unless he has some zinger that will appeal to news producers and headline writers.

Obama would not be the first president to use his #2 to lob incendiary devices he could never handle himself—what with concerns about presidential dignity. Richard Nixon famously used Spiro Agnew to play to his base with relentless attacks on leftists, the media, and other perceived enemies. George H.W. Bush had Quayle play a similar role, and so, to varying extents, have almost all presidents.

Here are a few from Agnew, a crude man lent elegance by speechwriters, notably William Safire:

-“A spirit of national masochism prevails, encouraged by an effete corps of impudent snobs who characterize themselves as intellectuals.”

-“In the United States today, we have more than our share of the nattering nabobs of negativism.”

-“Some newspapers are fit only to line the bottom of bird cages.”

-“Yippies, Hippies, Yahoos, Black Panthers, lions and tigers alike — I would swap the whole damn zoo for the kind of young Americans I saw in Vietnam.”

Now, let’s consider the impact and benefit of Biden’s issuing purportedly unauthorized statements that supposedly create problems for his boss. His role in another recent controversy is instructive.

Barack Obama has alienated a number of his core constituencies by behaving differently as president than he had as a presidential candidate. Perhaps none was more important than the gay vote. Wealthy gays are a hugely vital part of the democratic constituency, and many important gay donors had been withholding their support because of Obama’s reticence to publicly endorse gay marriage rights.

When North Carolina, an important swing state, had its ballot measure on marriage equality in May, Obama remained silent. Big gay donors were none too happy—and the funds were drying up.

Then, two days before the North Carolina vote, Biden went on the program “Meet the Press” and declared that he was “absolutely comfortable” with same-sex marriage. Members of the media, such as Washington Post columnist Dana Milbank, reacted quickly, declaring that, by appearing to contradict his boss, Biden had created a “mess” for Obama.

Some mess. Biden’s comment came just two days before North Carolinians voted by a 61%-39% margin to ban gay marriage.  Because it was Biden, and adjudged an “unauthorized” comment and a gaffe, the White House did not have take any flack from black voters in North Carolina, many of whom supported the ban. North Carolina, like Virginia, where Biden delivered his most recent alleged goof, are crucial swing states with sizable black populations. North Carolina is especially delicate because it is also the site of the Democratic convention where Obama will be renominated.

And what was the upshot?

Almost immediately after the North Carolina vote was in, Obama switched his position, offering a more modest version of Biden’s, following in the veep’s tail wind, and facing little of the criticism he might have faced had he been out front on the matter.

Obama ended up satisfying his gay donors…on Wednesday morning. And the story was put out that Obama’s hand had been forced by Biden…but also that the president had been undergoing a gradual metamorphosis himself on the issue. The media, of course, totally bought it. As the New York Times wrote:

Before President Obama left the White House on Tuesday morning to fly to an event in Albany, several aides intercepted him in the Oval Office. Within minutes it was decided: the president would endorse same-sex marriage on Wednesday, completing a wrenching personal transformation on the issue.

Within minutes, the floodgates began opening. As the Los Angeles Times reported:

“Today has focused attention and enthusiasm in an almost cathartic way,” said Andrew Tobias, treasurer of the Democratic National Committee and a top bundler for Obama. “Within minutes, people were calling with their credit cards. They’re thrilled.”

One donor pledged $10,000 and decided at the last minute to fly with his partner from Los Angeles to attend an Obama fundraiser in New York on Monday headlined by the singer Ricky Martin, Tobias said.

“I think for people who were holding back, who were disappointed in the president’s position, that this would remove a barrier,” said Jeff Soref, an Obama fundraiser and a former chairman of the LGBT caucus at the DNC. He raised about $120,000 for Obama for an event in New York last year.

“There were people who thought this position on marriage equality was a litmus test and they were either holding back, or were very modest in their contributions,” Soref said. “It’s silly to pretend that it didn’t make a difference to people. I think it did…. People weren’t clear where the president stood. Now they are.”

Obama’s decision is likely to trigger major demand for tickets to a June 6 fundraising LGBT gala in Los Angeles featuring the singer Pink….

And then a quiet effort began to convince black voters, many of them religious and socially conservative, that gay marriage had to be considered a right just as those for which blacks fought so long.

It’s a win-win. With these two incidents, Biden first satisfies the gay constituency and brings in the money, then he alerts the African-American populace that, even if it isn’t sufficiently exercised or enthusiastic about Obama at this point, the alternative is far worse. The “chains” metaphor isn’t really inapt when one considers the tremendous burden placed on working class Americans by the financial institutions whose behavior causes so much duress and grief. And by invoking language that has powerful emotional resonance with a particular audience, he pushes exactly the right buttons with Obama’s core. This is exactly the kind of memorable thing that makes people come out to vote.

And there’s probably little down side. It’s unlikely that many swing voters will tilt to Romney because of what Biden said.

Using Biden in this fashion shows just how smart and effective at p.r. and spin the Obama team is. It’s the new, improved Democrats, having learned more than a few lessons since the days when the Reagan team ruled and the opposition cowered.

Thanks to these events, Obama and Biden now have enough money to compete, and if Biden can mobilize a strong black turnout in swing states—and most of the swing states have large black populations—they’re in.

The media either doesn’t get how this works, or is reticent to spell it out. Either way, the latest Biden BooBoo is yet another example of how the public is the last to understand what is going on—and how it continues responding, on cue, to manipulation…not substance.

There are 18 comments Our Comment Policy: Keep it civilized, keep it relevant, keep it clear, keep it short. Please do not post links or promotional material. We reserve the right to edit and to delete comments where necessary.