Last month, over 8 million people tuned into 24 Hours of Reality, a global-warming info-dump and call to action, organized by Al Gore’s Climate Reality Project. During the event Gore claimed that the climate-crisis grassroots movement is “growing more rapidly than any grassroots movement ever.” However, although the science behind the climate crisis seems increasingly solid, the politics of climate change grows ever more divided and contentious. As the movement’s most visible spokesperson, Al Gore seems to act as a polarizing figure, leaving some to question whether he is in fact a help or a hindrance to the cause. So perhaps it’s time to “think small” for a change, and consider some of the innovative ideas that are helping people cope with environmental challenges around the world.

Living Bridges and Other ‘Arbotecture’

In terms of infrastructure, residents of Nongriat in northeastern India, have created perhaps the most symbiotic relationship with nature that mankind could ever hope to achieve. For 500 years, the villagers of Nongriat have been adapting their natural surroundings to suit their needs. In an area where heavy rains mean steel or wooden bridges are inadequate, they have come up with an ingenious solution to connect the water channels and make transport in the region possible. They grow their own bridges. By guiding the growth of the roots from the ficus elastica– a species of rubber tree that flourishes in the region- they have managed to grow bridges up to 100 feet in length, capable of holding the weight of 50 people. Bridge-growing can take up to fifteen years to complete, but once established they do not deteriorate or rot, instead they continue to grow and strengthen for future generations. 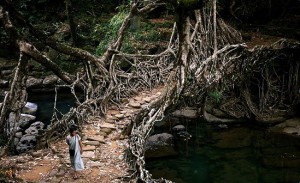 Although growing infrastructure elsewhere in the world may not seem very realistic, one possibility for many areas could be to grow our own furniture. In Australia, Peter Cook has been growing tables and chairs for 25 years in his back yard, using a process known as tree shaping.  This technique involves directing arboreal growth into pre-determined designs, allowing tree shapers to create anything from ladders to entire building structures. 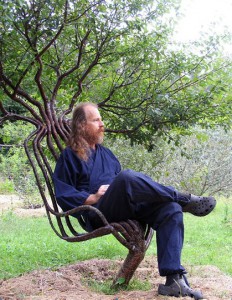 While growing buildings may be a bit time-consuming, another eco-friendly alternative is to build them out of waste… human waste, to be specific.  By combining vegetable oil with the ash from incinerated sewage, Yorkshire Water and Leeds University in England have created carbon-negative bricks, classified as such because the plants used to create the oil once absorbed CO2 from the atmosphere. They are currently being developed for commercial use; a production plant is in design and scheduled to begin operation in 2012. 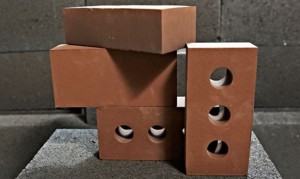 From building a house out of waste to constructing an entire island out of rubbish – WHIM Architecture envisions using plastic waste gathered from the North Pacific Gyre (a huge garbage patch in the north-central Pacific Ocean) to create a self-sufficient island the size of Hawaii. Plastic would be used to make both buildings and fields, while compost toilets would create fertile ground. Not only could this help clean our oceans, it could offer a potential habitat for refugees from coastal areas inundated by rising sea levels caused by global warming. 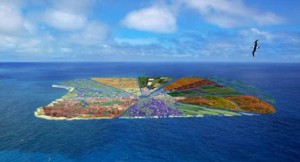 Simple Solutions to Save and Improve Lives in the Developing World

In the Philippines, the world’s cheapest light bulb has been developed. In many shantytowns, houses are built so close together that they get virtually no sunlight during the day. Using a bit of corrugated iron and an old plastic bottle filled with filtered water and some bleach, people living in slums are now able to light their homes from dawn to dusk for a one-time outlay of just $1. This low-tech innovation (which also recycles plastic waste) lasts for up to five years and works by refracting sunlight into the dark room below, giving out around 55 watts of light. The ‘Liter of Light’ project, founded by Illac Diaz, is active in shantytowns and schools in 31 different cities in the Philippines and promises to provide a lighting solution to millions living in slums throughout the developing world. 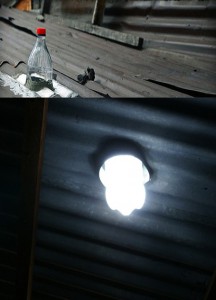 Finally, an innovative idea for an urgent and serious concern: the need for clean drinking water. According to UNICEF, three million people every year die as a result of diseases caused by unsafe drinking water. A German manufacturing firm, Zeltec Engineering, has come up with the Watercone to combat this problem. As simple as it is effective, the Watercone uses the sun’s rays to transform salty or brackish water into clean drinking water. It has been proposed for use not only in the coastal regions of developing countries, but in disaster areas such as tsunami-hit Japan, where hundreds of thousands were left without potable water for several weeks. This basic equipment could prove invaluable in saving the lives of millions.

2 responses to “Re-Envisioning Our Environment”