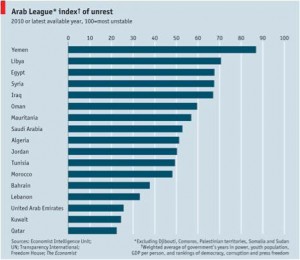 According to the Economist, data can help predict who will be next in line to overthrow their government in the Middle East. But how accurate is it? The Atlantic attempts to answer that question with its own monochromatic “Index of Political Unrest”.

There’s been a lot about the billionaire industrialist brothers in the press lately. Though it may surprise you that the staunchly libertarian David and Charles Koch shelled out $20 million to the liberal ACLU, it is exactly consistent with their self-serving politics despite Reason’s claims otherwise. [Read more here.]

To Be Or Not To Be Organic

Would you eat food labeled “organic” if you knew it contained trace amounts of genetically modified crops? According to a recent survey, 77% of organics consumers would stop buying organic foods if it contained GMOs. And there’s a growing concern among some organic producers and anti-biotech groups that organic farmers aren’t doing enough about cross contamination. [Read or Listen to more here.]