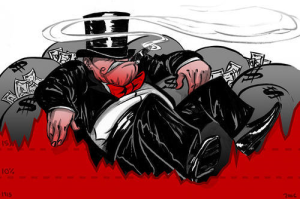 The adage, “You can never be too rich or too thin” takes on ironic new meaning in the Village Voice’s interpretation of a remarkable graph showing the share of income going to the top 1 percent of earners over the past 100 years.   Read more here.

How to Build a Progressive Tea Party

With the recent events in the Middle East and the union busting in Wisconsin, Americans can learn something useful about fighting back from our neighbors across the pond. In the UK, a group of ordinary citizens decided to disrupt business as usual: By spreading the word on Twitter and holding nation-wide protests of the largest cell phone provider Vodafone, they demanded the company pay up for billions in taxes owed. The bottom line: If companies that did business in Britain were made to pay taxes, the nation’s public services would not be cut and the poor would not be forced out of their homes.

A week after South Dakota shelved a bill that would legalize “justifiable homicide” as a legal defense for the murder of abortion providers, Nebraska introduces an almost identical bill that would protect anyone, including third parties, who attempted to prevent harm to a fetus. Read more here.

China Blocks Any Hint of Protests

The Chinese government is on high alert for the second week in a row, censoring blogs and websites urging people to protest and have dispatched hundreds of police officers to the city centers of Beijing and Shanghai.  Read more here.